What Is a Relationship? Lessons from a Warthog 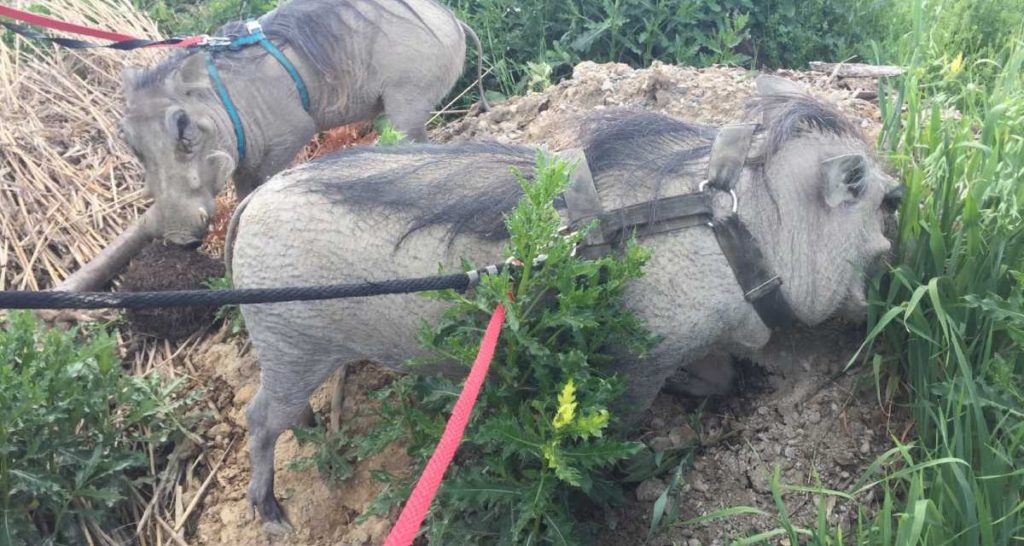 I heard a soft, high-pitched whine with an ascending tone from our 5-year-old female African warthog.

I looked at Sophia, to see her stopped, stiff and still. It was early evening, and she was out for a walk with me and another trainer as part of her enrichment program. Her companion, a male warthog named Piki, was also harnessed and exploring alongside her. I held his leash as he continued to snuffle loudly along the ground, glad to see his calm behavior continuing despite Sophia’s warning. I walked slightly behind him, letting him lead, my small way to add choice and control to the activity. The seemingly simple act of walking two warthogs in harnesses had taken years to realize. From harnessing with consent to self-directed exploration on a loose lead, our enrichment walks are the culmination of years of incremental practice designed to result in a skill set that allows the warthogs to experience as many areas as safely possible outside their regular enclosure. The activity is for their benefit, and on walks they contentedly whisk their tails and utter contact calls, little grunts, as we explore.

But not that day. Frozen behind me, Sophia was still not responding to cues. That was a bad place to be — I knew that a build-up of physiological stress in her 185-pound frame could find its natural outlet in a bolt-like startle, a sprinting run that would take her handler with her. I asked my back-up handler if she was available for me to hand off Piki to her, and she stepped in without hesitation. I unclipped and transferred my lead to her. Piki easily targeted with his new handler and walked away, sniffing and rooting unconcernedly along the ground as I started to walk back to Sophia, who was still frozen on the hill. Her trainer cued a target to his hand and she whined softly again, ears forward and listening — maybe tuned to something distant my ears couldn’t register. This behavior was very unusual, and it had come on suddenly. I suspected she was alarmed by something I was not perceiving. We had rarely heard the vocal communication of alarm: the social message informing us that the usually easy-going Sophia was stressed or anxious.

Many years ago, a big-cat trainer had given me the advice to “set them up to fail” and had also told me that a relationship would always win over training when things went wrong. I think about that advice often. At the time, I was new to training bigger cats, and I wanted a mentor for the cougar I had just started working with. But despite her background and expertise, I could not accept the advice. In fact, I recoiled mentally from her words. The phrase “set them up to fail” was something I would learn from, but not in the way she intended it. I was already working with aggression in dogs, was an owner of a dog from that population, and could not fathom that advice being safe. I knew that “setting them up to fail” was a dead-end road, a place I would never take an animal on purpose. At that time, I thought maybe she was sharing advice from the exotic animal training world, since she was an experienced big-cat trainer at a large, accredited zoo. I knew it mattered immensely that we not use punishment to train a frustrated cougar. Even as I internally dismissed her version of shaping behavior, I never really put her words to rest. Her other phrase, “relationship is stronger than training,” haunted me. I dog-eared the mental page, keeping it in the back of my mind to revisit someday. The lessons that you can learn though training are like a fractal image: although they appear to be complicated, they’re actually governed by very simple rules 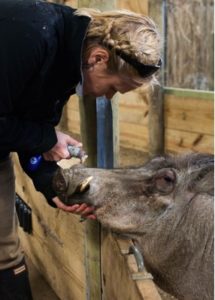 When I reached Sophia, her handler was standing at her side, no longer trying to cue behaviors. He was relatively new to working with her, and anxiously asked if her freezing here and whining was his fault. He wanted to know if part of this behavior was happening because his relationship with her was not strong enough. His concern reminded me of that advice from the big-cat trainer from so long ago. Training was once perceived as a defined, limited series of distinct events, where food items were delivered after a behavior elicited by a cue. But in practice, this was just the jumping off point for a science in constant evolution. With each person and each animal, you create an ever-changing relationship built on not only the mechanics and timing, but also encompassing your reinforcement diversity, your tone and body language, the ability to prevent your animal’s frustration, and your creativity together.

Assessing Sophia’s frozen stance, I looked down at the massive face of the stiff-legged, softly whining warthog. Her whine and wrinkled eyes told me she was not enjoying working this out on her own. Before me, as before any trainer, was an almost infinite set of options: combinations of reinforcements and moments to offer them. I happened to have a long history of kneeling down when I met Sophia on a walk and offering her a special treat, scratching her chin and feeding her almonds. She would frequently give me a chin rest as I prepped her to do a vet exam, looking in her ears and eyes carefully. I would then mark for her stillness and heavy head. In this moment I used that history with her. Like I had done so many times over the years, I knelt, and she began to move again. She walked to me, planted her face in my palm, and relaxed her neck and her head. Her head felt really massive, dusty, and powerful. I marked the behaviour after a few seconds and fed her. We did several hand targets in quick succession until her body began to relax and her tail began to swish from side to side. I had enough repetition and high enough reinforcement history I could offer Sophia a cue she had a strong history of reinforcement for even then, when she was alert and signaling distress. It was enough to transition her from her frozen state. She came into safety with me. She began targeting with her other handler again, and we all continued on the walk. All was well in Sophia’s world again.

This was a simple moment for a training day, one of many diverging paths with myriad responses and reactions for a trainer to choose from. In this moment with Sophia, it all came together. We don’t get to choose when an animal is learning with us and when they stop. Every single moment builds and grows with the next to create your relationship with an animal. At the same time, your training is influenced by every piece of information the animal has about you. You are then, in essence, always training. The two things, relationship and training, could be the same thing. Training can be a relationship, and new relationships can be initiated through training; the animal doesn’t just stop acquiring new information and learning by itself.

Training is now so much more than collecting behaviors and putting them on cue. We can now ask and they can respond, with the animal helping not only to inform but to guide our training practices in a two-way exchange of feedback and information. When training is at its best, animals can offer participation to help provide comfortable vet care, husbandry, improved mental health, and optimal welfare. We can ask the animals to help steer those important events concerning them and their future. Listening to an animal’s voice is such a small thing, but the effect it has on animal welfare can’t be overstated once it’s understood. As trainers we have the ability to help our animals, learn to hear and respond to their voices, and improve our relationships with them at the same time.

Kate Wilson BS, CBCC-KA, CPDT-KA trains both dogs and exotic animals. Kate is currently the director of training for K9 Turbo Training, and as director of training at The Creature Conservancy in Ann Arbor, MI. She works to allow the animals opportunities to participate in their own vetting and care, to foster teamwork in animal care, and to provide community education on topics like animal behavior and training.