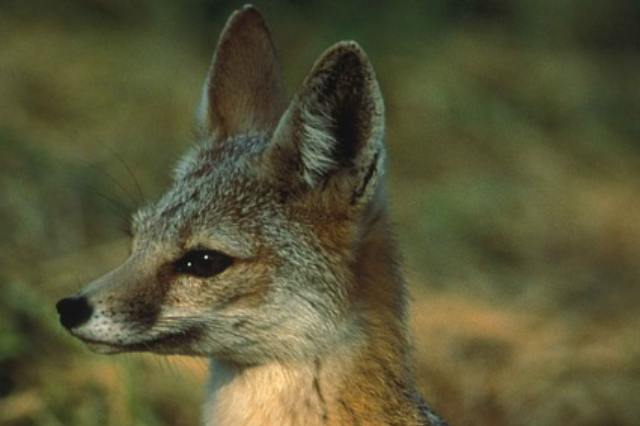 The San Joaquin kit fox is a small endangered species of fox that lives in Mexico and the southwestern United States. Its scat is small — these foxes are only about 5 pounds. The almond-sized scat pellets are usually the same color as the desert ground. Biologists struggle to get an accurate census on these small foxes, even using camera traps and intensive human surveys.

Dyer’s woad is an aggressive invasive species of plant. It’s allelopathic, meaning it produces compounds that hinder the growth of other nearby plants. It also produces up to 10,000 seeds each time it flowers, making its spread across the northwestern United States particularly fast. The plant is hard to identify and remove before it flowers — and if it’s already flowering, it’s almost too late.

Poachers can easily hide an ivory hippo’s tooth or a ream of pangolin scales inside their bags. It’s nearly impossible to search for wildlife contraband like this effectively — especially if it’s on a crowded public bus. Poachers can also easily disappear into the bush after killing an animal for its ivory, skins, or scales.

With their powerful noses and almost pathological desire to get someone to throw the ball, conservation detection dogs are able to help conservationists around the world learn about endangered species, eradicate invasives, and stop wildlife crime.

Drawing from the knowledge of search-and-rescue teams, narcotics trainers, and even the sport of K9 Nosework, conservation detection dog handlers teach their dogs to sniff out target scents in exchange for a ball. It starts out simple: scent = ball. The handlers then gradually create more and more complex scent problems for the dogs to solve, introducing wind, 3D obstacles, tall grass, and ever-larger search areas. The dogs learn to ignore coyote scat when they’re searching for wolf scat and to follow their noses toward a plant instead of toward a chittering squirrel.

Working Dogs for Conservation employs over 30 conservation detection dogs. Most of these dogs flunked out of “home life” or ended up with a career change out of narcotics, protection, or service dog work. They’ve now found their calling.

Organizations like Working Dogs for Conservation are almost always looking for new working dogs. This is because they estimate that only about 1 in 1,000 dogs is actually well-suited to full-time fieldwork. These dogs must be able to work in challenging field conditions, with different handlers, around wildlife, and for hours on end without reward. The first thing they look for in a dog is a strong drive to chase balls. But beyond ball obsession, these organizations are also looking for dogs that are focused and physically able to work long hours in a wide variety of environments. These dogs must be so motivated by the ball that they’ll happily track poachers instead of chasing meerkats. At the same time, they can’t be easily spooked by cars, passersby, other dogs, or the sounds of the forest.

This sort of dog isn’t easy to find. Meanwhile, U.S. shelters euthanize roughly 670,000 dogs per year. Many dogs are euthanized for being too high-energy for the average home. These dogs may be exactly what conservation detection groups are looking for. Working Dogs for Conservation estimates that potential working dogs are about 1 in 1,000 out of your average shelter, based on 20 years of combing shelters to try to find working candidates! Assuming that roughly 1 in 1,000 of the 670,000 dogs could be a conservation detection dog candidate, U.S. shelters may be euthanizing 670 potential working dogs each year because there is no streamlined way for shelters to identify a potential working dog.

Here is a video of Working Dogs for Conservation’s work:

Trainers and behavior consultants often run into high-energy dogs that aren’t a good fit for their current home. One of my first experiences with that was Fred, a Labrador retriever and pointer mix who came through the shelter I worked for in 2017. He was only 18 or 20 months old and had already been through at least two homes. He was destructive in the home, constantly pacing, chewing, and digging. Fred also had a habit of biting and drawing blood when he wanted a toy — I felt like he was not behaving in a truly aggressive way with any attempt to harm; it was more like he was in a panicked frenzy to get the toy from your hand. He fixated on toys (and many other moving objects), barely breathing, with pupils the size of dinner plates. We put him through a Nosework training program, where he excelled once he learned to find hidden food for a ball. Fred was eventually adopted out as a bedbug detection dog. His frantic energy disappeared (along with the chewing, digging, pacing, barking, and biting) in favor of spending time methodically searching hotels and apartments for the scent of bed bugs.

While increasing exercise and adding structure can often help these dogs, sometimes the dog truly needs the sort of daily mental and physical exercise that only regularly comes in a working or sporting home.

Working Dogs for Conservation has partnered with the International Fund for Animal Welfare to create Rescues 2 the Rescue to help identify dogs with strong working potential and match them with detection organizations.

If you know of a shelter dog, or any dog that needs a new home, that might be a working candidate, this site might help match the dog to a job. The preliminary screening should be videoed and ideally conducted by someone who doesn’t know the dog well. It consists of:

The full scoresheet also includes details about the dog’s personality, such as willingness to interact with a strange handler and reaction to a loud noise. Working Dogs for Conservation is seeking dogs that can work with novel handlers after long, trying days in the car — but some other detection organizations may be open to slightly “softer” dogs that do best with a single handler.

For the right dog, a career in conservation detection can be a lifesaving opportunity. While their job isn’t always easy, it is one of the few working dog positions that allows the dogs to be out in the wilderness as part of the gig. Conservation detection dogs aren’t spending their days inhaling exhaust along the border or pacing TSA lines. And although these working dogs don’t understand the gravity of the work they do, they do really enjoy the search — and the ball at the end! Help Working Dogs for Conservation out by keeping your eyes peeled for candidate dogs in local shelters, being good outdoor stewards with your dogs, and getting involved in Nosework, scentwork, or detection work near you.

Kayla Fratt owns Journey Dog Training, where she provides remote behavioral support to dog and cat owners around the world via email, text, video chat, online courses, and e-books. She also works as a freelance writer. She holds a degree in organismal biology and ecology from Colorado College and is a Certified Dog Behavior Consultant with the IAABC. She is currently driving from Denver to South America with her Border collie and boyfriend. She’s obsessed with conservation detection dogs and loves trick training.