What Do Trainers Know About How Horses Learn? 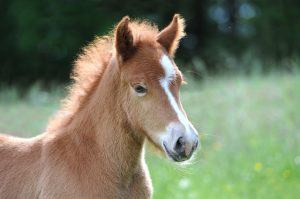 When the June 2016 issue of the IAABC Journal ran an article on eliminating the use of aversives in equestrian training, I felt inspired to offer a summary of my study on the current use of these methods in equestrian training. The notion that positive reinforcement methods have overtaken the use of punishment and the (outdated) theory of dominance in canine behavioral analyses (when compared with equestrian training methods) resonated with me immediately. As noted by journal article author Catherine Bell, there is a cognitive dissonance between those who embrace reward-based training for their dogs but who will use “pressure halters or gum lines on horses” while rejecting “the use of choke chains and other aversive collars for dogs.”

Following the completion of my Equine Behavior and Intervention program’s Equine Behavior Residency, I was privileged to spend my externship practicum studying and working with Angelo Telatin at Delaware Valley University’s Equine Behavior Science program. The days were filled with behavior modification efforts for stall aggression, lunging and biting behavior, and desensitization to ear clippers while on crossties, among other stable vices and handling procedures.

The art of combining positive and negative reinforcement in our daily work with the horses in the DelVal riding stable led me to question why these methods didn’t seem to be the norm in equestrian training. . The popularity of “natural horsemanship” demonstrates that old-school thinking prevails in equestrian training methods. I wondered, why do equestrian trainers continue to use pressure and aversives in their training methods in spite of the wealth of research to the contrary that supports successful outcomes in equine rehabilitation and socialization, and performance on learning tasks? To what degree can training methodologies be combined for improved equine welfare?

Discussions with Angelo on ideas for a study that would make a contribution to the equestrian training world and have a qualitative impact on the equestrian training community, therefore creating positive outcomes for horses in their care, led to the development of my research project. In this report, I will share the problem statement that was developed in terms of what we know from research thus far; make a case for measuring the current practice and use of negative and positive reinforcement in equestrian training practices; and discuss the application of behavior science principles in that practice. I will also outline some related concepts and the purpose of the research.

Introduction and statement of the problem

Equine researchers also note that most of what we do to train horses runs counter to the animal’s innate preferences, which is something that the equestrian world is beginning to pick up on. Terms like “ethological training”, which is supposed to take the horse’s natural behavior into account, are becoming commonplace; however, these references to ethology in horse training are being used without clarity or any mention of learning theory.

Researchers have looked at the ethological challenges for working horses, and questioned the use of some terminology currently found in training circles, such as the terms “alpha” and “leader.” Ethological challenges include interventions that cause horses both social and environmental distress. Due to the current high rate of “wastage” attributed to behavior problems that result from inefficient equestrian training methods, efforts have been made to establish a set of training principles considered essential for optimal learning in horses during training. We know that when these principles are not adhered to, results can include a decrease in maintenance of a desired outcome or behavioral response, an increase in conflict behavior, and learned helplessness. The intention of establishing training principles for horses, as such, is to limit the occurrence of adverse welfare outcomes in current training practices.

In early foundation training, when an efficient mechanism is needed to establish control over the horse’s movement and response, most trainers establish control of their equine charges through negative reinforcement, or pressure release. With negative reinforcement, increasing the pressure is the motivation for the horse to trial a response, with the release coming when the desired response is performed. The timing of the release of pressure is critical to reinforcing the desired response. Failure to time the pressure release properly can lead to confusion and conflict, and the poor application of negative reinforcement techniques accounts for many behavioral problems in the ridden and led horse that can manifest as conflict behaviors and may escalate into learned helplessness.

The primary use of negative reinforcement involves operant conditioning via the application of pressure and its release when the desired response has been performed. Reinforcement, whether positive (reward-based) or negative (application and withdrawal of pressure) will always increase the likelihood that a response will occur in the future. Conversely, positive or negative punishment (the application of an aversive stimulus or withdrawal of an appetitive stimulus) will typically result in a decrease in response in the future. Punishment and negative reinforcement are central to operant conditioning, as they can be used as a consequence for behavior.

In spite of the significance of negative reinforcement in foundation training of horses, its meaning and use are largely misunderstood by qualified trainers and riding coaches of all training modalities. For example, a study by Warren-Smith and McGreevy found that a significant proportion of qualified Australian riding coaches misunderstood negative reinforcement; the authors stated they had no reason to believe it would be any different in any other country. In fact, the most marketed horse training system in the world, The Parelli “natural horsemanship” system (known as Horse-Man-Ship) also incorrectly defines negative reinforcement despite its almost exclusive reliance on that quadrant.

Although the topic of “contact” in current equitation texts is more appropriately addressed than it has been in more classic dressage texts over the centuries, in the context of training, contact with both hands and legs on the horse’s mouth and body generates considerable confusion related to the amount and kinds of pressure necessary for the horse to be considered “correct.”

The sensitivity of a horse’s mouth would indicate that inappropriate use of negative reinforcement in the decelerating effects of rein use can lead to conflict behavior, stress and wastage. Conflict behaviors may include rearing, bucking, shying, swerving, leaping, and bolting.

McGreevy and McLean note that although desired responses can be achieved through the pairing of a light aid (voice, whip tap) with the release of pressure (negative reinforcement) through classical conditioning, many undesirable responses can also appear if the basics of foundation training on lead, in hand, and under saddle have not been established correctly in the early stages of training.  Therefore, it is critical that trainers recognize the importance of all phases of training, so that they can offer the optimal learning guidelines for training horses in each phase by shaping desired responses slowly and incrementally. Other studies note that slowly habituating horses to a new environment or stimulus is essential.

Horses, like all other organisms that have been investigated for learning ability, show the capacity for behavioral change brought about through the processes of habituation and desensitization. Good trainers understand these learning abilities and take advantage of them by exposing horses to new sights, sounds, and contacts in a positive manner. As Evelyn Hanggi explains, if trainers do not understand the principle behind the practice, the horse may become more highly sensitized and fearful.

Research on the use of negative versus positive reinforcement in the rehabilitation of ponies suffering from chronic stress due to substandard environments, abandonment, and neglect demonstrated that ponies retrained using positive reinforcement were more highly motivated in learning than ponies rehabilitated using negative reinforcement, as previously noted.  In a study, Ferguson and Rosalez-Ruiz tested target training strategies with five mares that had previously been training using aversive stimulation. All of the mares exhibited inappropriate behaviors prior to the test. Inappropriate behaviors in trailer loading include rearing, pulling back, head tossing, pawing and moving sideways.  These behaviors are likely to be negatively reinforced when the horse fails to load—these escape behaviors will cause the release of pressure, negatively reinforcing the behavior. The authors of the study found that after the training, which used shaping, the presence of a companion, and limited hold time, inappropriate behaviors dropped to zero.

In addition, the push and pull interaction between horse and handler can negatively impact the owner-horse relationship, causing a dangerous situation. Slater and Dymond (2011) also note in a recent study that inappropriate behavior during common handling procedures with horses is often subject to aversive treatment. In their study on differential reinforcement and shaping trailer loading with positive reinforcement, full loading responses for all four horses were shaped and maintained, and inappropriate behaviors were reduced to zero.

The purpose of my research

The purpose of my study is to establish a baseline for the current selection of training methods by equestrian trainers. It will investigate trainers’ knowledge of learning concepts and basic principles of Skinnerian learning theory. My intention is to uncover the level of trainers’ recognition of terminology and their applications in training horses. In addition, I want to know what the current views of equestrian trainers on negative and positive reinforcement are, and how trainers are using them in current practice.

Finally, my work is an effort to support an established view in equine behavior: that horses can easily become highly sensitized during the training process, in addition to their exposure to the unnatural housing environments of stable confinement. I believe that it is through the application of positive reinforcement–based learning theory, rather than through punishment, that we may experience an improved level of trust and joy between owner and horse. My hope is that this work will make a contribution to expanding the Umwelt of the domestic working horse.

Gina earned her bachelor’s degree in Creative and Expressive Therapies at the University of Massachusetts at Amherst. She completed her academic and residency requirements for a master’s in Companion Animal Behavior Analysis and Counseling from the American College of Applied Science.