The Welfare of Captive Fish 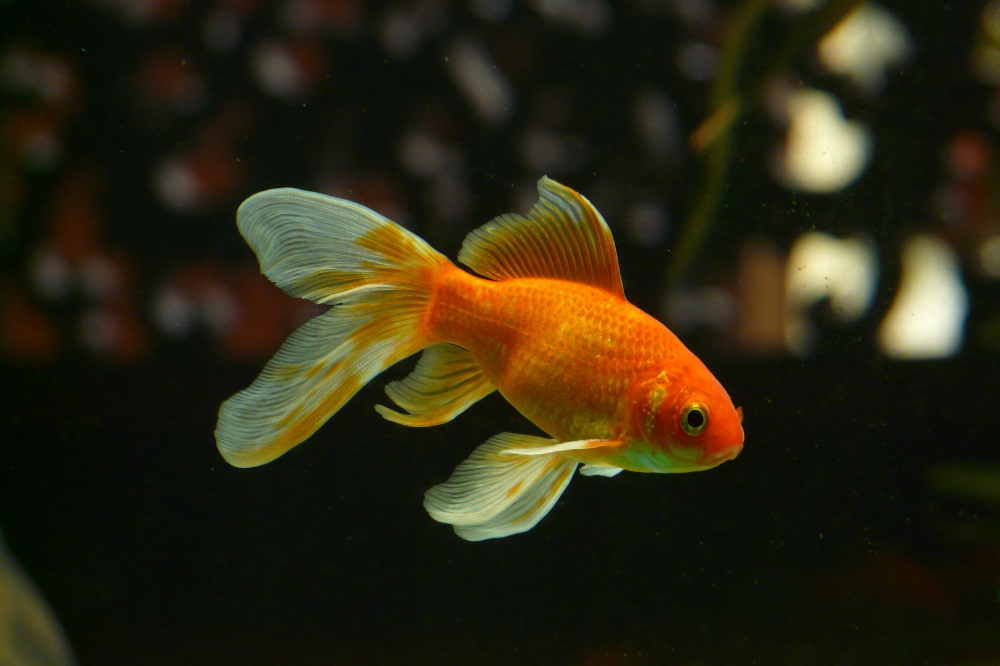 Summary: Of all the species we keep as pets, fish are perhaps the least well-understood and least cared about in terms of their behavioral welfare. Recently, however, scientists have been researching fish cognition and learning that these animals have sophisticated intelligence and memory. This article looks at what we know about fish, and how fish-keepers can use this information to take better care of their aquatic charges.

Aquatic animals have been habitually overlooked in animal welfare research, discourse, and policy decisions. The best available contemporary evidence, such as that referred to in the Cambridge Declaration on Consciousness  (2012),1 clearly indicates that the subcortical neural networks that fish share with other vertebrates contain neural marks of qualitative feeling; these are neurochemically homologous to those of terrestrial mammals we associate with complex cognitive function and emotion.2

In recent years, advocates have clearly established that many aquatic animals possess the neuroanatomical, behavioral, and physiological attributes that allow them to experience pain and suffering.3,4

The majority of literature on fish welfare has centered around minimizing suffering during slaughter and controlling disease in farming situations.5 Though crucially important, these issues are not the only ways fish welfare can be compromised. Additional evidence indicates that fish experience a much wider range of emotions and are capable of more complex cognitive processes than previously thought. Some welfare concerns in captivity include stress, boredom,6 and frustration.7 These are typical responses to a barren environment that can become detrimental when experienced chronically. For this reason, the welfare of aquatic animals should be given ample consideration and respect in all realms of captivity.

Welfare refers to the physical and mental state of an animal in relation to the conditions in which they live. To promote good welfare in captive animals, it is necessary to first determine what constitutes “good welfare” for a particular species using science-based measurements and assessment protocols. Franks, Suarez, and White (2020)8 emphasize that the industry is in the midst of a transition from simply “minimizing negative states” to actively encouraging positive aquatic animal welfare. Mellor and Beausoleil (2015)9 provide a detailed depiction of how this model, which has a well-established utility for identifying and grading animal welfare compromises, can be readily adapted to address the enhancement of aquatic animal welfare.

The most widely accepted welfare paradigm is the Five Domains Model,10 a modernized version of the original Five Freedoms Model of animal welfare assessment developed in the mid 1960s.11 The Five Domains Model is regularly updated to reflect significant developments in animal welfare science thinking, such as the emerging interactions between physiological (biological health) and psychological (subjective experience) aspects of animal welfare10 and the critical importance of promoting positive experiences in addition to reducing pain and suffering in captivity.11 The Five Domains Model is generally considered the gold standard of holistic animal welfare assessment criterion and is extensively used to monitor welfare across a vast variety of species and contexts, including animals living in zoos, laboratories, farms, and private homes around the world.10

The Five Domains Model is outlined as follows:

Nutrition – the quality, quantity, and method of delivery of the water and food available to animals.

Physical environment – the affective impacts of physical, sensory, and atmospheric conditions to which animals are exposed.

Health –  the physiological and affective impacts of injury, disease, and varying levels of physical fitness.

Behavioural interactions – behavioural evidence of hindered and/or enhanced expression of agency when animals interact with (1) their environment, (2) other non-human animals, and (3) human beings.

The first four domains focus attention on factors that induce specific negative or positive subjective experiences, which contribute to the animal’s mental state, as evaluated in the fifth domain.12

Animal welfare assessments must take into account physiological, psychological, behavioral, and relational parameters. In practice, this means that striving to provide captive aquatic animals with a “life worth living”10 involves engaging in appropriate husbandry practices (maintaining optimal environmental conditions, providing all individuals with a nutritionally balanced diet, providing appropriate medical care and health monitoring, etc.) as well as providing animals with opportunities for positive experiences (provide animals with the opportunity to exercise individual agency and choice, including access to environmental variability and species-appropriate enrichment, and housing animals in species-appropriate social groups that minimize aggression while promoting healthy social interaction).

Recent research shows that many aquatic animals are capable of both positive and negative physical and psychological experiences. Thus, welfare consideration should include both positive and negative welfare parameters in order to provide aquatic animals the developmental opportunities required for a true allostatic “life worth living” rather than focusing merely on freedom from the worst forms of suffering.13-15Together, these interventions should aim to provide animals with a significantly higher quality of life similar to that experienced by their conspecifics living in their natural environment.

Furthermore, every aquatic animal should be treated as a conscious individual, with attention given to their qualitative experience at every stage of life in captivity. Aquatic animals should be counted as individual animals instead of by mass or groups.

The Aquatic Life Institute (ALI) has identified key areas of welfare that deserve ample attention when keeping fish in captivity that can be applied in a variety of settings.

Environmental enrichment is one of the most neglected areas of aquatic animal welfare. The intentional complexification of an animal’s surrounding environment can provide animals an atmosphere that is suitable for them to live in good health, and where each of their biological systems functions appropriately. Additionally, by emulating their natural habitat, this can allow a captive animal to express behaviors they evolved to express in the wild, which are critical to their overall well-being. The primary aim of environmental enrichment is to enhance well-being by providing animals with sensory and motor stimulation, through structures and resources that facilitate the expression of species-typical behaviors and promote psychological well-being through physical exercise, manipulative activities, and cognitive challenges according to species-specific characteristics.16

While indicators of frustration or boredom are often difficult to identify due to the variability among species, individuals, environment, etc., we must pay ample attention to any abnormal or negative stereotypical behaviors that occur in captivity. For example, in Atlantic halibut (Hippoglossus hippoglossus), Kristiansen et al. (2004, 2007) observed an increase in stereotypic behavior described as “loops of vertical swimming behavior”.17 Environmental enrichment can be most appropriately assessed by using preference tests for individual animals, with respect to species, life stage, and natural history. To apply appropriate strategies, a possible first approach could be evaluating specific preferences for various resources or conditions which would allow better identification of what fish actually want, instead of what humans think they want. Furthermore, determining their motivation to access specific resources could tell us how much they want these preferable resources, highlighting which of them are more important than others.18

Stocking density levels appropriate for the species being raised and the life stage of individuals must be maintained to avoid negative physical, psychological, and behavioral impacts. Too many fish in a habitat can lead to poor water quality, increased cognitive strain, and elevated aggression. Additionally, we should strive to increase the total swimmable water volume per individual to reflect the species’ needs. This is particularly a primary welfare concern for species that need a considerable amount of space to express natural behaviours.

One of the most obvious indicators of inappropriate space requirements is aggression. Aggressive behaviour can be noticed from scales in the water, injuries from fin/tail nipping, or frequent hiding. Although aggression is a result of not enough space for some animals, it’s important to note that too much space can also have negative effects for certain species for which social hierarchy and interactions are critical. In order to avoid any negative welfare effects for aquatic animals in captivity, we must carefully consider the species we choose to keep and space requirements in their natural environments.

It is imperative to understand and adjust the quality of water according to specific needs of the fish in order to ensure optimal health. Fish are sensitive to some 20 chemical factors in the water, which all have correlating effects on one another; an increase in one might be a limiting factor in the level of several others. Principal water quality parameters to consider and specify according to species and life stage should at least include dissolved oxygen (DO) levels, concentration of carbon dioxide and ammonia, salinity, turbidity, and acidity.

Unfortunately, the most telling indicators related to poor water quality will most likely be in the form of obvious sickness or negative health conditions and death. Water quality is a universally accepted high-priority welfare issue as it directly relates to animal survival. However, we must understand that water quality also ties into the other pillars of welfare. For example, environmental enrichment could encourage fish to utilize the entire enclosure, rather than just a few select areas. This in turn could prevent some areas of the enclosure from having worse water quality than others. Additionally, ensuring optimal space requirements can result in improved water quality as leftover feed and waste is minimized because of fewer animals in confined spaces.

The aforementioned key aquatic animal welfare considerations can be applied in a variety of settings such as commercial aquaculture facilities, in addition to private residences. It is crucial for the public to acknowledge that fish and other aquatic animals are capable of feeling pain, fear, joy, boredom, frustration, and stress.

Faunalytics conducted an important study analyzing U.S. beliefs about small-bodied animals and their relation to animal-positive behaviours. Small-bodied animals, like fish in captivity, are generally viewed as less intelligent and less “like us”.19 For example, most fish lay eggs and don’t breathe air. These differences are thought to make the suffering of these animals seem more distant from our own, and therefore make care and empathy for them less likely.20

We do not typically connect with smaller aquatic animals in the same way we bond or empathize with terrestrial companion animals or even larger aquatic mammals. Nonetheless, these intelligent, sentient beings deserve the same level of care, respect, and admiration. It is imperative we help drive a public shift in attitude regarding the treatment of aquatic animals around the world.