The Most Successful Case I Ever Lost 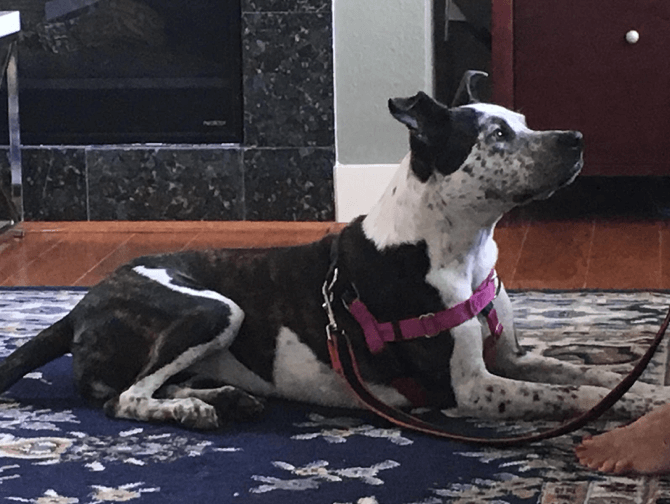 We are teacher and trainers. We are also learners. Our animal clients have lessons for us, it seems, each time we meet. When is it time to observe? When is it time to step back, adjust our plan? When do we push forward? We are familiar with these lessons, we trainers and behavior consultants.

And, sometimes our clients (the dogs and the humans) have unexpected lessons for us.  They lead us to the harder questions at the core of our own humanity. How can we help? What does help really look like? When is best to simply be? Be present. Be kind. How would it be to succeed and then let go?

I worked with Raelyn and her people for 10 months. Our in-person training relationship lasted barely six months, during which time we had 13 meetings.

Raelyn was 18 months old. My clients, a couple in their late 20s who would later marry, had adopted Rae from a rescue group when she was 8 months old.

When I met her, Rae had bitten one person, a male friend of the couple. He’d been in invited into their home and it looked like everything was going well. The couple couldn’t remember details. There were probably a lot of signs that things weren’t going well, of course. The truth is, no one expects their dog to bite until it does. No one was looking for trouble so no one saw it brewing. Raeyln was probably tense and wide-eyed. These were things I’d point out to the couple later in our work together. But, that day they didn’t know. Everything was fine until it wasn’t. Raelyn attacked the man’s backpack, biting it several times. Then she bit the man – on the arm – hard.  It was quick. She retreated or they pulled her off. They couldn’t remember for sure. The man was hurt. He had a scratch and a shallow puncture. Later there would be a nasty bruise.

They thought, as many dog owners do, that maybe it was a one-time thing. It’s easy enough to understand; even when we know it’s 100% wrong. Who among us hasn’t been tempted to wish a problem away?  Hope is a fickle friend with a dark side. Raelyn began barking at visitors more and more intensely. Then one day she lunged at the client’s sister. She didn’t bite, but it was terrifying. This problem wasn’t going away. It was getting worse. So they called me for help.

Our first meeting was messy and loud and a little scary. Rae barked and lunged but was able to respond to my client and take some food, even under duress. We moved inside, giving Raelyn breaks to cool down in her crate upstairs. Every time she came back down there was a similar blow up.

The initial meeting on our second visit looked exactly like the week before:

But after a few minutes upstairs to cool down, and some coaching for the client, we got to this:

The client was able to work with Rae successfully while I watched and coached. We added new exercises; Rae saw Dr. Haug; Within a couple of weeks she was getting on her mat on cue and relaxing more.

Raelyn was noticeably improving. A few days after our second visit, the client sent me photos of her sister on the bed with Rae. That made me a bit nervous, after all, Raelyn had gone after that same sister before, but they appeared to be comfortable together; they were becoming friends. And the clients told me about other pro-social encounters as well: Meeting people, lots of structure and attentiveness—no barking or lunging. On our next visit, three months after first meeting Raelyn, I saw a huge improvement. Raelyn was willingly engaging with me, targeting my hand, not showing any excessive or troubling signs of stress or aggression.

We took Raelyn’s leash off and practiced her verbal cue for mat work.

Then we practiced “go say hi.” We were building a formal protocol for meeting people, a combination of proper medication, mindful attention to her physical posture and facial expressions, training based on structure and respecting the dog’s choices—and patience.

It’s one thing to hear a client tell us what their dog is like when they are home and she’s quiet and no one else is around—the dog who is playful and gentle, the one they cuddle with, the one who falls asleep in their arms while they binge watch TV. It’s another thing altogether to meet this dog they’ve been talking about all along—the one they want everyone to know. This is the Raelyn I finally met here:

Raelyn saw Dr. Haug a few more times, and she saw me many more times. Our initial greetings were always carefully staged, but we were becoming friends.

Raelyn by this time had met several new people inside and outside the home. We had a clear plan for how we’d set up these meetings for her and the plan was holding. Dr. Haug released Raelyn with an open door to check back any time they needed her.  Buoyed by our success, I did the same. This was a win. Good work! I told the clients, please call or email if you need anything, no matter what.

Dr. Haug checked in by email with the client three months after my last appointment. There was no response, but that happens sometimes as people move on. No news is good news, or so we hoped.

I moved on, too, to other clients. I was already using videos of Raelyn as examples of how we do things—of what it looks like when we get it right. Then, I went on vacation. I was on the other side of the world, in Indonesia, when I got the email. It was now five months since our last appointment.

“Hi Michael: Last night we had an unfortunate incident with Rae, she has bitten a second person. Could this have been prevented, yes? Did I have my guard down and not set her up for a win and more for a loss? Most likely yes. Nonetheless this was scary as most bites are especially since it was to the person’s face, millimeters away from the woman’s eye.”

There was a photo of a woman with a puncture and a scratch on the bridge of her nose. The wounds were shallow. But, there would eventually be a small scar. And, it was her face. Raeyln had jumped and bitten her on the face I read on, worried that this meant they were considering euthanasia for Raelyn, searching for any indication she was contacting us for more behavioral help, any bit of hope.

“… I am not sure we can continue down this road much longer. We can’t continue to put our friends and family at risk and sacrifice a normal social life and not have people over to our beautiful new home that we worked so hard to buy.”

Dr. Haug was copied on the email. Her response was clear and measured. She asked for more details and called for a two-week cooling off period before the couple made any final decisions. I was more emotional—my response, though not inappropriate, was clearly a veiled plea for Raelyn’s life. I even set up a WhatsApp call with the clients from Indonesia. It was on that call that I first heard them say what I knew they were thinking: “Put Raelyn down,” was the phrase they used. I suggested, again, Dr. Haug’s idea of a two-week moratorium on any final decision. But I think I knew even as I was saying it that we were done. By the time I got back home, Raelyn would be gone.

I stared out the window, past the poolside bar, far out over the ocean to the horizon. And, I cried. Emotions are tricky. They don’t always fit neatly into words like “angry” or “sad.” They are messy. I was hurt, raw and aching. This case was done – in the win column. Now, it was a mess. I was a mess. I slipped into self-doubt. What had I missed? Where did I go wrong? And, how could I have let myself get attached to this dog? Everyone knows not to do that. And, why can’t I stop this? Why?

Dr. Haug is a mentor and a colleague. Most of all, though, she is a friend. So, she stepped up. This must have been a difficult time for her, too. But, she stepped up and reminded me 1) This wasn’t our decision to make. 2) We still have a professional obligation to the clients, no matter their decision. This is our job.

I had to dig deep into my core values for the final lesson. 3) Human kindness is what matters, even when we are hurting. Especially then.

I sent off one more email that read, in part: “I know you will take good care of each other—and I will be thinking of you as well. I look forward to the chance to work with you again in better times.”  It didn’t feel like enough. The truth is I like these clients and I knew they were devastated. I should have said more. But, it was the best I could manage at the time.

I still use Raelyn’s videos to show my clients what is possible. Very few people who see the videos learn the outcome of her case. But everyone learns her legacy.  I tell clients, you will be working with your dog long after our professional relationship has ramped down, her whole life in fact. We will create a “new normal” with protocols for helping her become more comfortable in her world. I’ll show you how to increase safety for people around her while we also help her feel safer. And then you’ll maintain that training. I tell them this on the first phone call, even before they hire me. Then I tell them again once or twice more during our in-person work. Every time I do, I think of her.

Now, after every client’s last meeting I set a reminder on my calendar to check in with them in a couple months, just has Dr. Haug had. Sometimes I hear back; sometimes I don’t. We do what we can and hope it’s enough. I guess the other thing I’ve learned is that we have to be okay with that.

About a year later, Raelyn’s people called me. I hadn’t heard from them since Indonesia. The caller ID still had Raelyn’s name on it.  They had a new puppy, they said, a golden retriever. Would I come out and help them get started on the right foot? Would I be willing to work with them again?  I didn’t even have to think for a second. Of course, I said, I’d love to.

This is the work we do. People call and we do our best to help. It can be hard and there can be hard losses—hard lessons.  So, we learn. And, we teach what we learn. And the next day we get up and do it again. How could we not?

Michael Baugh CDBC, CPDT-KSA, KPA-CTP helps families with dogs who are fearful, unruly, and sometimes bite. A graduate of the SFSPCA Academy for Dog Trainers and Karen Pryor Academy, he founded North Coast Dogs in Cleveland, OH in 1999 and Michael’s Dogs in Houston, TX in 2008. Michael has a bachelor’s degree in communication with a secondary concentration in psychology. He took graduate studies in community counseling for the specific purpose of learning to work more effectively with human clients. Currently Michael lives in Houston, Texas, with his husband and two senior dogs, where he meditates, reads, exercises, and enjoys chocolate in equal measure.