The Dead Dogs on My Phone 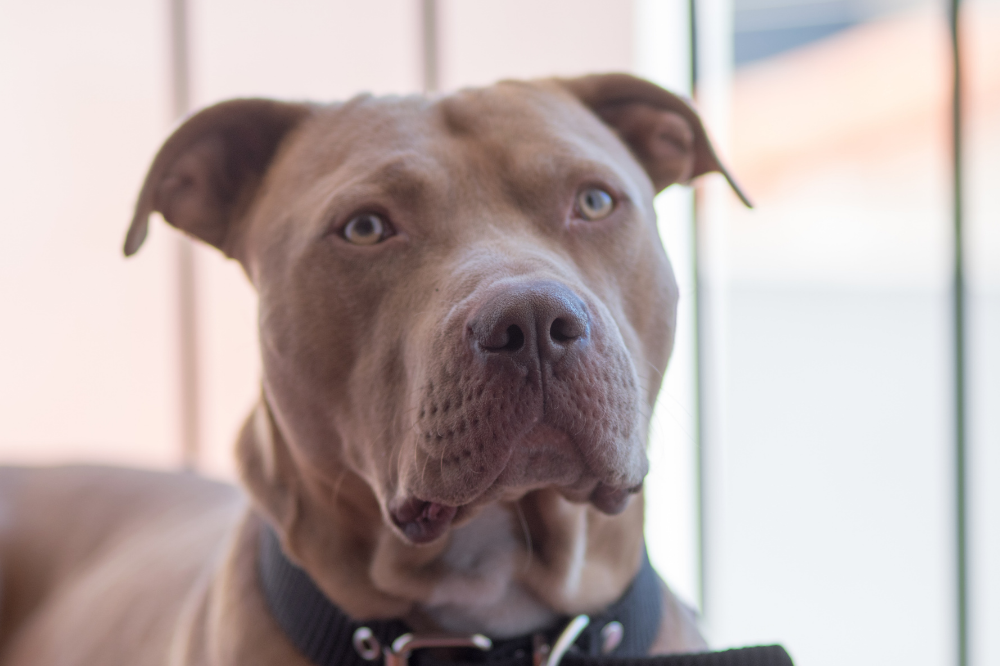 The notification pops up on my phone that I am nearly out of storage, so I begin the process of cleaning up the biggest memory-eater on my phone: photos. As I scroll through, deleting the various screenshots, memes, and duplicates, I see her. She is sleeping deeply on the cushioned bed in my office. I take a moment to admire her beautiful red and black coat, and I remember her soft eyes that were desperate to not be here, and how surprisingly soft and thick her coat is. But what’s not in the picture is the office door shut with the large sign in red letters that says “Do Not Enter,” or her jumping up and snapping in my face, or grabbing my arm and leaving marks, and there’s no picture of the person who had owned her giving her to us while being afraid of her going near him. My heart aches a little bit.

I take their pictures in the time we’re together, and there is hope in those pictures. I hope that if I send that picture to rescue they’ll want them. I hope that we come up with the perfect management strategy. I hope this moment of behavior that is beautiful and safe and calm will be their reality. And more times than not, it is. We work out a plan, a deal, a bargain with that dog. We hold up our end to alleviate their fears, reduce their stress, and help them understand they’re safe, and they hold up their end of the bargain and keep those around them safe.

But, sometimes I can’t meet their demands. Maybe their fears are too great, their anxiety too much, or their damage too deep. Then they aren’t safe, and we have to make difficult, hard, messy decisions. We spend so much time and energy trying to stoke this flame of potential we see but when we realize that that flame is in the middle of an ocean of aggression or fear, we realize that there will only be one outcome for this dog.  There is a wave of grief that sweeps over us, and it’s the grief of what might have been, the grief of disappointment, and the grief of loss.

In that wave of what might have been, we ask ourselves “What if they had been socialized properly?” and “What if we could just do this one more thing?” and “What if I could just find a rescue?” The unknowns are endless and can feel overwhelming. And we also begin to grieve for the actual loss of the animal. It can be easy to harden your heart  and just ignore that dog when it’s clear they can’t be saved, but afterward, all you feel is the grief of regret. The grief of regret is not honoring my work, and not honoring the dog is the most painful of the griefs. So I persist and do the right, hard thing, and I celebrate the dog in front of me as best I can.

It’s a conscious decision I make to stop thinking of what might have been and focus on what is: a dog who deserves my attention. I stop trying to rehab them, and I take the time to just enjoy them for what they are. I look past their oceans of issues and focus on that small flame of potential, and instead of trying to fan it into life, I just enjoy it for what it is. Maybe we play games I know they enjoy, or I toss them loads of hotdogs if they don’t enjoy or aren’t safe with physical contact. Sometimes I just let them nap in my office in the quiet, cool air. I turn down the lights, I give them something to chew, put on calming music, and give them a soft bed, and I just let them be a dog. And most importantly, when I can, I take a picture.

It would be easy to think of the dead dogs on my phone as a macabre shrine to failures, but that’s the opposite of what it is. The pictures are celebrations of the moments when my short-term deal was a success. These pictures let me remember the moments where I saw hope, and they help remind me about the good parts in every dog. When I look at them, it’s not the lunging, screaming, tooth displays at the other dogs I remember. It’s the big, beautiful head in my lap doing little flea bites on my stomach that’s unceremoniously lumped over my jeans, causing me to laugh and toss a toy for an office game of fetch. It’s the daily delights of just being a dog, and the work that the dog and I did together to help them, that I remember.

I don’t know why they behave like they do. Most of the time, I don’t have any history. I don’t know if they’ve ever been in a house, been owned, or been treated kindly; I only have the dog in front of me. So, when I take that picture to remember, it may be the only picture of them that exists, and I want to remember the parts of them that were special. I also want to remember my own efforts in trying to help these dogs become adoptable. For each of these dogs, there was a short-term deal made, where I would do my very best to help them and they would do their very best to be helped. Those good works have value and deserve to be celebrated on their own.

It’s a magical thing when you can help a dog cross into being wholly adoptable; that is a feeling that can’t be paralleled. But there are so many dogs that are never able to make that journey. I can’t only focus on the dogs who are a whole success because then the dogs who weren’t able to become adoptable would become this enormous weight dragging me down and keep me from being able to move on and help other dogs. Celebrating the dogs who didn’t make it, keeping the dead dogs on my phone, helps me remember the good we did do. It helps me remember those short-term deals where the dog was safe around me, and they were able to just be a dog. And so those moments where that dog and I made a short-term deal live only on my phone.

I scroll through and I delete pictures of my cats, my kids, the cute puppies that came in, the silly playgroup that brought me joy. But I never delete the dead dogs in my phone. I want them to know I remember them and that their lives had value. Some are harder than others, and I scroll a little faster past those. Sometimes it hurts just a little too much. But I just can’t bring myself to delete them. So I keep the dead dogs in my phone to remember those brief, fleeting moments where they were loved and safe, and so they know they’ll always be remembered. 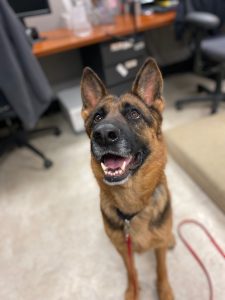 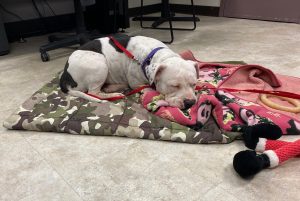 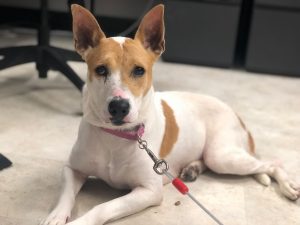 Paige Kim CBCC-KA, CSB-C is the Behavior and Enrichment Coordinator at the Irvine Animal Care Center. She has been an animal sheltering professional for over 15 years and takes pride in making the world a little better one day at time by helping pets and the people that love them. She shares her life with two old cranky cats, two kids, and one husband.