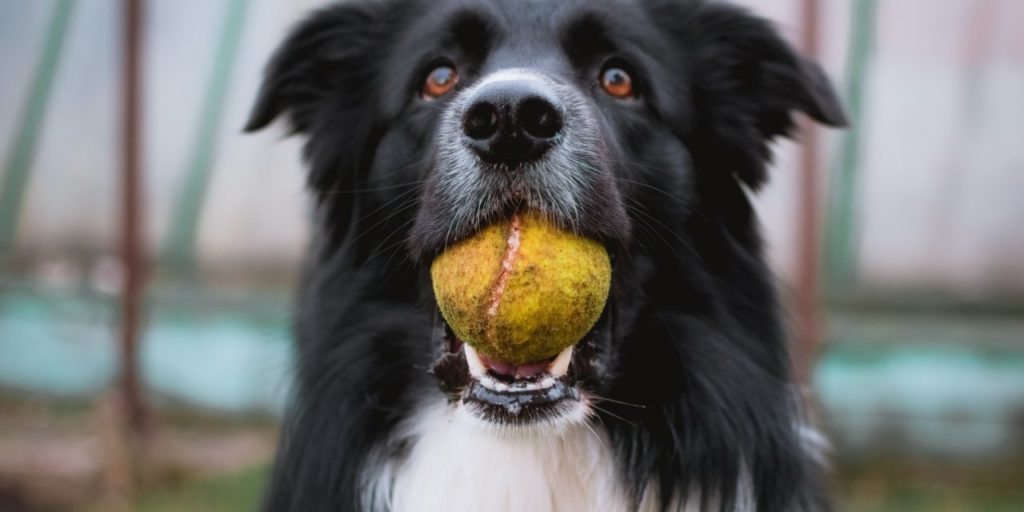 Dogs learn to rely on body language (combined with positional, olfactory, visual, auditory, and tactile cues) to predict where and when reinforcement is likely to occur, as shown in this video:

But most people are less aware of the body language and unintentional cues they are sending. This disconnect leads to errors and misunderstandings in scent detection dog training.

To illustrate how unaware people are of their body language, imagine walking through a busy crowd.

How do you avoid collisions by relying on body language to navigate through crowds in busy public places? When someone approaches you head on, you may look at the empty space on the ground on your right side. This communicates that you intend to pass them on the right. If both people look at the same location, you may look at your left side next, communicating that you’ll pass on the left. Sometimes you end up dancing with a stranger, moving left and right, until you agree on how to pass each other. How many times have you performed such nonverbal interactions, with and without your dog? 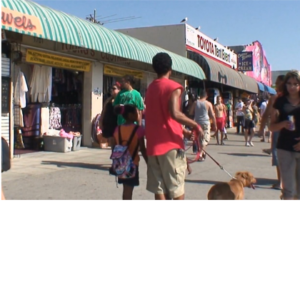 Crowds of pedestrians routinely pass each other without colliding, by using unspoken body language. They are generally unaware of the body language they are using.

In the last decade, public attention about how dogs use scent to detect everything from bed bugs to cancer has increased. More people than ever before are training dogs to find scent. A growing number of pet dogs are competing in nosework and sporting detection competitions, and some of those teams go on to professional scent detection.

As a professional scent detection trainer, I regularly observe handlers helping their dog to find the hidden scent during training, both intentionally and unintentionally. Problems can arise after dogs learn to expect cues from their handler, when the team’s skills are tested in blind searches (where the handler no longer knows the location of the hide and cannot help). Finding scent is easy, but to train a dog to ignore human movement and environmental distractions is a longer, more involved process.

To appreciate the difficulty, consider Clever Hans, a horse who became famous for answering complex questions. He appeared to count the number of people in the audience, and do math, responding with the correct answer by tapping his hoof.

After over a year of investigation, psychologist Oskar Pfungst concluded that Clever Hans was reading the unintentional body language, such as head tilts or raised eyebrows, of the people asking the questions. (Pfungst’s original book is online here). Not only could Clever Hans read his trainer, but he could answer strangers he’d never met before. Poker players use similar skills when they watch for tells that competitors unknowingly display when they’re bluffing versus holding a winning hand. Simply put, Clever Hans couldn’t perform the feats that made him a star unless he could see the face of a person who knew the correct answer. One of the most interesting parts of this story is that Professor Pfungst was unable to control his body language well enough to prevent the horse from reading him. Unfortunately, no video was recorded.

Patricia McConnell summarized the Clever Hans effect: “Really good handlers and trainers are well aware of the problem, but it’s more extensive than you might think… the mind boggles. How many tiny pupil dilations, head bobs or changes in scent do we make every day that communicate with our dog?”

In a 2011 study by Lisa Lit et al., 18 experienced professional law enforcement canine detection teams completed searches under various conditions, but there was no target odor at all. Further, all handlers were misinformed; they were told that the searches might contain up to three target scents and that markers indicating the position of the scent would be present in two conditions. Additionally, to distract the dogs, experimenters hid sausages and a tennis ball, giving handlers no information about those conditions, but marking the location of the distraction with a piece of red paper.

Handlers were grouped according to the following 4 conditions:

In this experiment, the dogs were trained to “alert” by sitting, barking, and both sitting and barking when the target odor was found. Upon observing the alert behavior, the handler would inform the proctor, who recorded the location. Teams false alerted 225 times, despite the fact that there was no target odor when the dog offered their ‘‘alert’’ behavior in the absence of odor. There were fewer false alerts in unmarked areas. The results suggest that handler beliefs affected the performance of their dog, and that the paper markers were more likely to cause false alerts (from human interference) than olfactory distraction by sausages (dog influence).

Not only does the handler influence the dog’s choices, but the trainer or tester can interfere even more than the dog’s owner (Schmidjell et al., 2012). Numerous studies have documented how a tester’s cues interfere with canine choices, including verbal cues, physical prompting, handler proximity to the dog, gaze, gesture, postural cues, pointing, nodding, head turning, and gazing. Unfortunately, videotape of these studies is rare.

So, how might a handler unintentionally cue their dog and give away the answer about where scent is hidden? In the first segment of this video, the handler demonstrates what the Clever Hans effect can look like.

In the beginning of the video, the handler shows the dog where scent is hidden by using body language. He quickly passes by the first couple of objects (without scent), then stops near the hidden scent. He blocks the dog from moving backward, facing his shoulders, hips, and toes to point at the odor, standing still and waiting for his dog to find it. He shortens his leash and gestures with his arm towards the correct location. Other handlers interfere even more by standing in front of the dog and pointing to the object they believe has the scent, while repeating “show me,” kneeling while holding a piece of food in their closed hand. Since many trainers teach their dog to lie down by luring with food moved toward to the ground, this frequently causes the dog to lie down in response to handler cues, rather than olfactory cues. If the dog’s alert behavior is a down, this can create a false alert.

In the latter demonstration in the above video, the search involves less assistance, since the handler is seated at a distance, behind the dog, off camera. Note the handler may still be sending signals to the dog, such as microscopic facial signals, changes in breathing rate, tactile signals when he sends his dog, the direction his body is facing, where he’s looking, perhaps even changing the scent of his body. But on the whole, handler interference is less apparent.

How to minimize the Clever Hans effect for scent detection teams

Understanding body language can help trainers to succeed in training scent detection dogs to independently search lineups. Lineups are container searches, consisting of several objects of identical appearance, that can only be distinguished on the basis of smell. For example, the video showed eight PVC tubes, where scent is hidden in one tube and all the other tubes have no target odor. Lineups can incorporate any type of object, from watering cans to turkey basters buried in the snow.

To minimize handler interference in canine scent detection, the first step is to train the dog to search off leash, independently of the handler. In comparison, starting by holding a container of target odor in your hand is incorporating the person into the dog’s mental picture of the search. Trainer and handler should fade their assistance as soon as possible, getting out of the picture.

Vary the angle of approach, dog and handler positions

If you only train in one orientation, your dog will be patterned to anticipate the location of scent based on the handler’s customary positional cues. Over time, vary the angle that your feet, hips, and shoulders are facing relative to the search. Additionally, vary the position of the dog and handler independently, relative to scent. Be sure to stand to the left, right, before and after the scent. 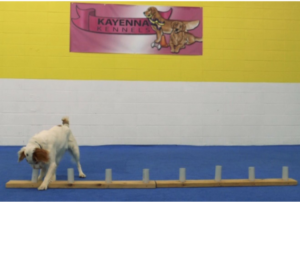 A bed bug detection dog searches a lineup of PVC tubes independently, off leash, at a distance from the handler (sitting out of camera), and alerts by freezing and staring. Photo © 2019, Hunter’s Heart.

To properly train your dog to search lineups without your help, you should train two types of handler motion:

If the handler isn’t even in the picture from the first session, the dog learns that it’s their job to search and find target odor independently. Work up to sitting down after you cue the dog to search, and then standing outside of the room while your dog searches.

Further, we recommend teaching the dog to alert and show the precise location of scent independently of handler position and movement. We use the Scandinavian Working Dog Institute Protocols. These protocols teach the dog to find their ball away from odor, and show its location by freezing in position and staring at the toy. Once the dog reliably finds and indicates the toy, we add target odor to the toy. The proofing process teaches the dog to continue indicating regardless of handler motions like walking circles around the dog, petting the dog, putting their hat on the dog, and so on. Training these skills away from odor first minimizes the risk of potential negative associations around odor when your dog chooses to follow you, and works out the kinks before adding the target odor.

Assuming that the Clever Hans effect occurs at least some of the time in searching for scent, the body language of all humans present, including the tester, the proctor, the spectators, and the handler may cause errors in canine performance. Different dogs may respond differently to specific cues, based on their training, experience, relationship, and personality. Dogs are likely influenced by the sum of all of the cues they perceive.

One potential solution is to practice as many double-blind searches as possible, as soon as possible. In double-blind searches, no people who know where odor is hidden are present in the search environment. This helps to minimize interference by humans, and focus on independent canine performance. Refer to the World Detector Dog Certification Guidelines for the full procedure of conducting double blind testing.

In our classes, another knowledgeable trainer hides the odor in specified rooms, then writes down detailed notes or maps to show precisely where odor is hidden. They put the results in an envelope, hand it to the trainer, and leave. The trainer watches the team searching, observing their behavior and ensuring they don’t cheat (by searching visually) or otherwise interfere with the dog’s search. Once completed, the handler records where alerts occurred. Then the envelope is opened to verify whether the team passed or failed. Then the trainer debriefs, explaining how scent travelled, and any areas for improvement, along with specific training plans.

In conclusion, dogs are experts at reading body language, while humans are relatively unaware of the signals they’re sending. This can lead to the Clever Hans effect, causing errors. Careful planning can help to minimize those errors by training sniffer dogs to search, find, and alert on target odor independently of the handler and other people present in the search environment.

Schmidjell, T. et. al (2012) Do owners have a Clever Hands effect on their dogs? Results of a pointing study. Frontiers in Psychology 3, p.558.

From bed bugs to birds, from narcotics to nosework, Carla Simon’s motivational training has helped hundreds of K9 scent detection teams to reach their potential. She’s been breeding Brittanys for Hunter’s Heart since 1999, for scent detection, hunting, and athletic partners for families with an active lifestyle. Blog: https://nosework.huntersheart.com