Animal shelters and rescues often struggle with resources. The ability to adapt to change is just as important as community and staff support. In April of 2007, the Jacksonville Humane Society suffered a great loss after a massive fire, which you can learn more about here. 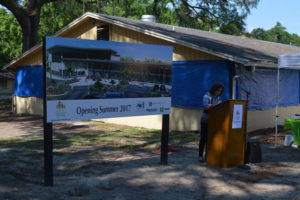 Construction is about to start—the old, fire-damaged kennel building is in the background

The shelter operated out of temporary modular buildings for many years. These modular units made for less-than-ideal conditions. In May 2016, construction began on a much-needed new facility. The new building features climate-controlled indoor kennels for the dogs, an area for training classes and other programs, real-life rooms for animals that do not thrive in traditional cages, group housing for felines, and a community resource center to help pet owners in need. During construction, the shelter remained open and operated on the same property. Two kennel buildings that could house 100 dogs were demolished during the initial construction, reducing the number of dogs that could enter the shelter. As construction continued, additional buildings would come down, including those that medical staff and behavior staff worked out of and buildings that housed supplies.

It was critical to the shelter’s leadership that we keep careful track of adoption rates and other key metrics, even during this transitional period. Clean data was crucial to predict and set realistic goals. These goals included maintaining a short length of stay, decreasing stress due to the construction, and maintaining the same adoption numbers that existed prior to construction. Pulling already tracked intake numbers, adoption numbers, and calculated length of stay allowed for a clear understanding of what was needed to continue helping the same number of people and animals as we did before construction began. 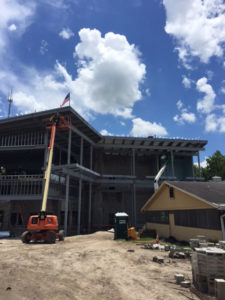 There is little dispute that even a modern, progressive animal shelter is not as ideal as a home. Concerns regarding housing cats and dogs in a shelter during major construction were addressed before and during this project.  If not addressed, the increased noise and dirt, and change of schedules could be stressful to the animals. Potential adopters could also be deterred because of these factors.

By continuing and strengthening existing adoption, training, and behavior programs, and updating them as needed, the animal shelter was able to provide structure and reduce additional stressors. This was achieved by:

Here’s an example of some of the great work our behavior team was able to do whilst we were dealing with temporary accommodation—a case study published in the IAABC Journal Fall 2016 issue. 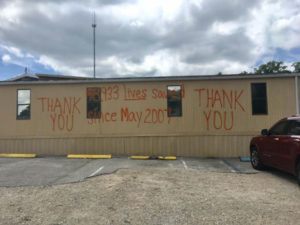 Goodbye to the temporary buildings

In September of 2017 the move was made into the new facility. Volunteers and staff walked the dogs from the old kennels into the new, climate-controlled kennels. The cats were transported by the construction crew, who built a special cart to move entire cage banks at once, preventing the cats from being moved from cage to carrier to cage. While the grand opening of the shelter will be in November 2017, the animals are already enjoying their new accommodation.  Dogs are less reactive, as there are fewer kennels in each run and they do not face one another. Cats are able to spend time in a quieter area. Even though the building is not yet complete, visitors enjoy the welcoming feeling that the new building brings. Working in less-than-ideal circumstances allowed us to pull resources together and provide the compassion and care for the cats and dogs in Jacksonville. If at all possible, it created an even stronger camaraderie between all of the people that make the Jacksonville Humane Society a success.

Amy Schindler, CPDT-KA, is the Operations manager at The Jacksonville Humane Society in Jacksonville, Florida and an Affiliate member of the Shelter Division of IAABC.