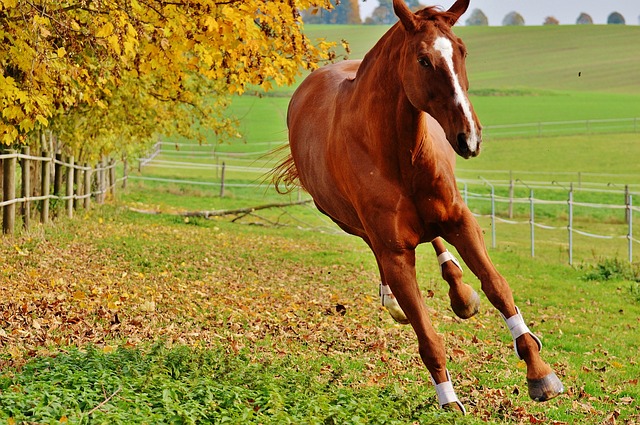 Stallions can be used in different disciplines and they may stand at stud either as retirement or alongside their “career” (Burger et al., 2012). Traditionally they are managed with little regard to their natural behaviour (McDonnell, 2016b); they may be stabled and turned out in isolation or where their interaction with other equines is limited (Burger et al., 2012). This has the benefit of preventing unwanted impregnation, injuries, and the transfer of diseases but the disadvantages of depriving the stallions of their natural breeding behaviours as well as social contact (Christensen et. al, 2002).

Natural behavior is important for welfare. The Five Freedoms describe necessary things that an animal should have access to in order to be considered to have been given the best chance at good welfare. This article will focus on the fourth:

The freedom to express normal behavior by providing sufficient space, proper facilities and company of the animal’s own kind.

In order to improve the welfare of these animals, the further incorporation of behavioural theory is vital; however, this will have a direct impact on the efficiency of management systems. This article will look at different aspects of a stallion’s life—mating, training, and housing—and identify areas where having a greater opportunity to engage in natural behaviors could improve equine welfare without unsupportable detriment to management or income potential for the breeder.

As the primary reason for keeping stallions is breeding, it makes sense first to look at how breeding is managed and what kinds of opportunities for natural behaviors a stallion might have under different breeding protocols.  Mating and courtship represent a set of fixed action patterns that can be considered natural behavior.

Stallions under conventional management are unable to carry out the natural fixed action patterns they would if they lived with a harem, such as:

The deprivation of these behaviours is thought to have an effect on the stallion’s fertility and libido (McDonnell, 2000; Burger et al., 2012), and also on aggression of the stallion to handler and mare (McDonnell, 2016b). This is obviously inefficient, unsafe, and may result in loss of earnings for breeders as well as indicate poor welfare for the stallions and mares involved.

The alternative to live cover is artificial insemination. Studies suggest that stallions that are used for breeding with artificial insemination tend to be less fertile, and measures of their libido decreases over time (Rua et al., 2016). The presence of a teaser mare, which allows the stallion to perform at least some of his natural mating behaviors, appears to mitigate these effects to some extent (Noue et al. 2001). Waheed et al. (2015) concluded that allowing more opportunities for live cover and incorporating teaser mares may help breeders manage stallions with abnormal sexual behaviors such as no or low libido.

The Noue et al. study mentions that handlers in both trials used bit pressure to prevent stallions from attempting to mount without erections. This mounting behavior acts as a test of receptivity; however, it is a part of natural courtship behaviours (McDonnell, 1992) and plays a role in arousal. If the stallions had been permitted to do this behaviour and not been prevented , the results could have varied; for example, the stallions could have been more aroused, leading to differences in ejaculation and erection latency. Although allowing the stallion to mount without an erection could cause the mare to bear the stallion’s weight for longer than absolutely necessary, the discouragement of a natural step in mating may cause the stallion frustration or decrease his willingness to mount (McDonnell, 2016a).

Handlers working in the breeding industry need to balance safety concerns—of the stallion, the mare, and the humans involved—with the need to preserve natural behaviors and minimize stress. Guidelines for handlers should encourage monitoring this balance and avoiding too much repression.

Although mating is an innate behaviour, the novice stallion will need guidance to ensure he does not put himself, the mare, or handlers in danger. The methods of training used on a novice stallion may have long-lasting effects on his future breeding duties. The process should remain positive for the stallion to encourage confidence. Punishment such as jerking the lead rope or chain can lead to learned helplessness, aggression, and loss of libido (McDonnell, 2007).

Traditionally stallions are kept separate from other horses due to possible aggressive interactions, injury, and unwanted pregnancies, and to limit the spread of disease (Christensen et al., 2002). Whilst this may be beneficial to breeders and to the physical health of the horses, it has negative effects on the welfare of the stallions (Kay and Hall, 2009; Ali et al., 2016). In undomesticated settings, stallions live in harems or bachelor bands and rarely live on their own (Christensen et al., 2002a). Social isolation is known to be a stressor for the horse (McGreevy, 2015) and is consequently a welfare concern. Isolation can result in behaviours such as restlessness, unwillingness to eat (Kay and Hall, 2009), aggression, and even self-mutilation (Burger et al., 2012). In addition to this, natural locomotor, courtship, and breeding behaviours are impeded. To improve welfare, stallions could be turned out in herds such as harems or bachelor bands.

It is common for social interactions between mare and stallions to be infrequent, and this can be the cause of boisterous behaviour by stallions towards mares when they do interact. Harem groups are a huge part of natural behaviour (Kaseda and Khalil, 1996) and may have the effect of boosting stallion libido and fertility (Burger et al., 2012) as well as increase the length and frequency of the mare’s oestrus cycle (Wespi et al., 2014), which is currently controlled by humans using artificial light (Crowell-Davis, 2007). If stallions and mares were kept together in harems, the need for artificial lights would be reduced, which would create a more natural living environment with more opportunities for movement, social contact, and other behaviors.

Although harem groups would provide a lot of opportunities for stallions to perform natural behaviors and decrease stress relating to social isolation, they are not feasible because they don’t relate well to modern breeding practices. When considering the option of harem living for domestic stallions, it must be taken into consideration the huge number of mares a stallion is asked to cover—there are an usually around nine mares in a feral harem with one or two stallions (Kaseda and Khalil, 1996), but an individual racing stallion covers around 200 mares a year. If a stallion can only cope with nine mares at a time, harem bands would regularly be disrupted by the arrival and parting of mares. An unstable herd environment can lead to increased agnostic behaviours and decreased friendly interactions (Christensen et al., 2011), which could lead to injuries and therefore loss of earnings to breeders as well as a negative impact on the welfare of the horses.

If they are not part of a harem, feral stallions live in relatively stable bachelor bands (McDonnell and Haviland, 1995). This way of keeping stallions is not commonly used by breeders because it is assumed that they would continuously fight and injure each other. Studies of feral stallions have shown, however, that this isn’t the case: Injuries tend to be superficial and once a linear dominance hierarchy had been solidified the intra-band interactions and relationships become more affiliative than aggressive (Tilson et al., 1988), and therefore could prove to be a safe, natural way of grouping stallions.

One problem with recommending that breeders transition their stallions to group living is that the horses may lack social skills they need to form stable, affiliative groups (Christensen et al., 2002a). They may need careful management and the use of transitional tools like the “social box” to allow bonds to form without risking aggression (Zollinger et al., 2016). Another issue is that living in bachelor band appears to cause the suppression of testosterone and therefore lowers libido, which is undesirable for breeders, but not a specific welfare concern for the stallions.

Currently, the balance is too far towards maximizing the stallions’ productivity and preventing physical injury, and not enough attention is being paid to their psychological and emotional needs, including the need to express their natural behaviors in breeding and associating with members of their own kind. Breeders should try to understand more about the ethological needs of the stallions in their care.

There is not enough research on the relationship between stress and the results of breeding in horses, but studies in other mammals suggest males under stress produce less high-quality semen and less testosterone (McGrady, 1984). Therefore, even though reducing the numbers of mares he covers and transitioning him to living with other stallions may represent a financial loss in the short term, the long term may show that these changes are worth making.