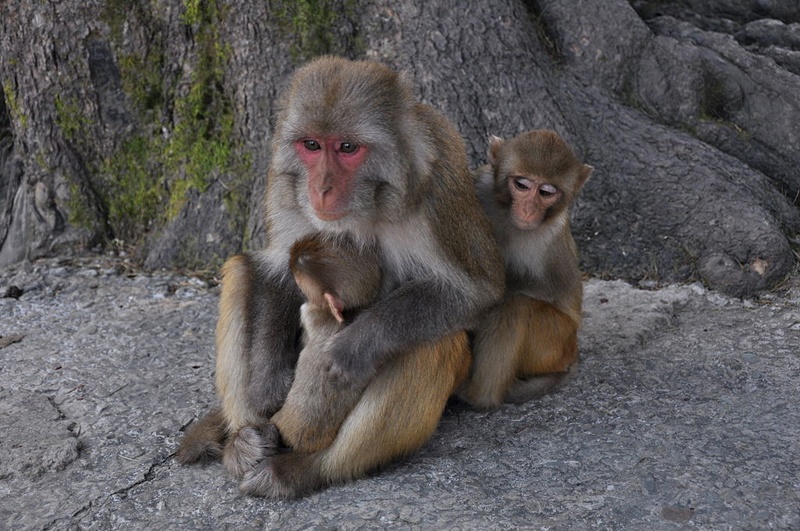 This issue, we talked to Lauren Robinson, recent PhD graduate from the University of Edinburgh. Lauren’s work focuses on how we measure personality and welfare, and how these two areas interact. She has worked with many different species, from puppies to penguins, but has focused on understanding the welfare of captive primates.

What made you want to study temperament testing in puppies? Are there other dog-related research questions you’d like to address?

The easiest way to answer this question is to start with an admission: I never expected to spend my life studying animals. I have always loved animals, but I was not someone who knew from childhood that I wanted to be an animal behaviourist. This is mostly because I didn’t even know it existed until my third year in university when I took an animal behaviour course as an elective. By the end of the first lecture I was in love with the field. Once I knew I could get paid to study animals I was 100% in. I say this because I think it’s important to acknowledge that you do not have to know your life dream at 18, and I’d argue that not knowing or having dedicated myself to one dream job allowed me to go down this path.

So, puppies! Once I knew I wanted to be an animal behaviourist, I threw myself into taking any available courses on animal behaviour and ended up in an animal learning course taught by Dr. Renee Robinette. It was there that my gift for gab landed me the study of puppy temperament. My father had been a dog trainer in the U.S. Air Force, and I’d grown up surrounded by animals, a history I told Dr. Robinette. She then directed to me her husband, Dr. James Ha, who was in need of an undergrad to take some previously collected data on puppy temperament and turn it into a paper. Write a paper as an undergrad?! Those kinds of opportunities don’t come along often: I was in. That choice and the subsequent mentorship by Jim Ha was the beginning of my research into personality.

Oh, let me count the ways:

Are there other dog-related research questions you’d like to address?

Tons! Much of my recent research has focused on primates (more on that in a moment) but I consider myself more a generalist when it comes to the species I’d like to study. There’s so much work left to be done on dog temperament and welfare and I’d happily spend more time exploring those topics. For example, I’d like to understand how differences in personality influence dog welfare. I’ve done this with other species but because the puppy temperament research was fairly early in my research career, I didn’t look at it in those animals. Right now I’m busy with other projects and beginning my post-PhD life but later I may get back to studying dogs.

What made you interested in primates specifically? Can you tell me something about how you collected your data?

There’s been a theme in my research career that you’re about to see, because I never intended to study primates and yet I’m beyond glad I did. When opportunities came up to do something interesting I followed that path, and that’s what led me to primates. I bring it up again to reiterate the point that you do not have to know what you want to do every step of the way; I’ve found the key is to recognize the right opportunity when it comes your way.

When I was accepted into my master’s program I knew I wanted to study zoo animals. I had been a volunteer research assistant for Dr. Ha at the Woodland Park Zoo and studied bears (amazing), hippos (slow moving but charismatic), penguins (very fast moving!), and elephants (so gentle), and wanted to continue doing that kind of research. I reached out to the master’s program early and was assigned the Japanese macaques at the Highland Wildlife Park. The Japanese macaques were none too interested in me but I immediately knew I was fascinated by them. They were charismatic, clever, daring, and funny and I just adored that they had zero interest in my opinion. What can I say, I like animals with attitude.  Following my master’s, I knew I wanted to study more primate species and pursued a PhD doing just that.

I did my behavioural observations at the Oregon and California National Primate Research Centers and this involved spending three to four months outdoors observing rhesus macaques. It was amazing! My animals were group-housed outdoors and I was the only one studying them, so I got to spend all day with them. That said, Oregon and Northern California are not the most reliable climates, and I also spent plenty of days drenched to the bone. I would not change a minute of it. The questionnaires and vet records were easier to collect, and I love this kind of research because it’s so practical and allows me to work with the people who spend their days with animals, but also, I love getting to spend my days outside with the animals in front of me.

Do you think personality testing in adult dogs might show up similar correlations between personality traits and welfare to the ones you found in your work with chimpanzees?

Until we test it I can’t be sure, but I would think so. We’ve found that personality and welfare are associated across three species now (chimpanzees, brown capuchins, and rhesus macaques) and someday I’d love to branch out and see if we find similar results in a variety of species.

Can you briefly explain why welfare is important in captive animals, and how it’s measured?

There’s a lot of different views on welfare, so I can only speak for myself, but here’s what I think: Welfare is important for captive animals because it’s about how they feel about their lives. When we keep animals in captivity, I view it as our responsibility to care for them and provide the highest quality of life we can. As an animal welfare scientist I try to contribute to that through studying ways to assess and improve their welfare.

There’s multiple ways to assess animal welfare. The most commonly used methods are behavioural observations and measures of physiological response (for example, testing levels of different hormones and immune response in the body). In these methods we’re looking for abnormal behaviours—such as self-injury and overgrooming—and responses, such as an excess of stress hormones in the body. I’m trained as animal behaviourist, so I primarily use the first method, though as I’ve now finished my PhD I’m looking for opportunities to do research that lets me study the physiology of animal welfare as well.

My own research is about trying another method: questionnaires. I want to know if the people who are professionally trained to work with animals (for example, keepers, researchers, and veterinary technicians) are able to accurately assess their welfare. The way that I do this is I get these people to answer questions about an individual animal’s stress, physical health, happiness with their life, and so on. I then look to see if those people agree on their answers and if these answers are predicted by observed behaviour. If both of these things are true it suggests that people working with animals are another source of information, and so far, that’s exactly what I’ve found. It’s a fairly simple idea but it hasn’t been done by a ton of researchers, which is what made it such a great PhD topic. I then use the welfare ratings to see how they’re related to the animal’s personality.

Why is it important to get quantitative data on welfare?

There’s a lot of good reasons but I’ll just cover a couple. First, we need to have strong quantitative data to show different stakeholders that animals are capable of suffering, joy, pain, pleasure, and so forth. I think that to most people it’s obvious that they are, but it’s important we have the scientific data to support this in order to start a dialogue with people who may not agree. For example, I can say that primates in the pet trade have reduced welfare but if I don’t have the data to support this, then those in favour of continuing to sell primates as pets may still disagree with me. However, once I collect and analyse quantitative data to support this argument then I have a much stronger case and one that may even influence things at a grander scale, such as legislation to make pet primates illegal (see this site for information on banning primates in the pet trade).

Another reason is that in order to monitor and improve animal welfare we need to be able to accurately assess it. Having quantitative data allows us to do this. When I measure animal welfare, then I can use statistics to look for changes in response to different interventions. For example, if I give an animal a new toy, I need to know if they pace less, if they spend time playing with the toy, and if it improves their general welfare. Having quantitative data lets me determine that. It also allows me to use this information in studies that I can then write up and publish, and that can be used by practitioners to make choices about welfare. For example, if cats like a certain kind of smell and I publish a paper showing this, then pet owners, shelter managers, and so on can use this information to enrich the lives of the cats in their care.

Do you think you could design useful questionnaires for shelter staff and volunteers to measure the welfare of the dogs in their care?

I don’t just think you could, I know you could! There are other researchers doing so, and I would say that shelters are one of the areas where a lot of welfare questionnaire work is done. I honestly think that staff know so much about the animals they work with, and collecting that data would be really interesting to look at what animals get adopted fastest, how being in a shelter influences animal welfare the longer the animal is there, and how personality is associated with welfare and adoptability. Though again, I will say there are fabulous researchers out there already doing this kind of work and they could probably speak more specifically to shelter welfare.

What will you do next?

I’m pleased to say that I’ve been offered a zoo-based postdoctoral position studying animal welfare using animal behaviour and endocrinology, which I’ll be starting at the end of July! I’m very excited to start my new job, and if readers want to keep up they can follow me on Twitter and Researchgate, as I regularly post updates on there!