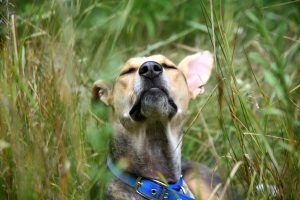 It was a second training session with an adorable Labradoodle puppy and his family. He lay patiently at their side while we began talking through solving the issues that come with bringing a young, energetic companion into their home, one with sharp teeth and an incomplete understanding of human household etiquette. Then we got up to work on actual training. After practicing some hand targeting and name game exercises, we started doing some work on building value for his sit behavior. Initially they were using treats as a reinforcer; however, he was paying more attention to the environment than to his teachers, and being slow at offering the sit.

Remember, this is a puppy who was born to play and who had just spent over half an hour in the car followed by time resting. He was ready for activity!

So, I wanted to show another approach. I stood in the center of the room and when the puppy followed and sat at my side, the second his rear end touched the ground, I proclaimed, “Yes!” and then proceeded to run and grabbed a tug toy.

He began to chase me. It was Game On! In just a couple of seconds, I stopped moving. He responded by putting his rear end back on the ground, and I immediately marked that behavior with “Yes!” and began moving again. On our third round of this, in addition to moving, I pulled out the tug toy, said “Get it,” and encouraged him to grab hold for a game of tug. After a few seconds, I gave him the cue of  “out,” gave him a treat, and then stopped to wait for him to sit again—which occurred in a split second.

All of a sudden this puppy that was uninterested in his classroom became a straight-A student.

So, I thought I’d talk a little about why this happened, and some of the lessons here about training.

Firstly, as teachers of pets, it should always be our goal to figure out how we can make our lesson plan clear and understandable for animals who do not speak our language. In this case, practicing capturing the sit behavior, marking it, and reinforcing it with many successful repetitions in their home with low distraction will help to build fluency with sit (part of this family’s homework).

Timing is important to teaching with clarity. Especially since non-human animals do not speak English (or any other human language!), marking the specific behavior you are reinforcing tells learners, “Yes, what you just did this second was exactly what I was looking for.”  One of our roles then as trainers is to help our clients build solid mechanical skills so that they don’t inadvertently teach behaviors they do not want to see.

Motivation is another important concept to keep in mind in training. Remember, when given choices, animals will choose to do behaviors that get them the most valued consequences. It is our job as their teacher to figure out how to make the behavior choices we want to see the most valuable choices for each learner. And that changes all the time. Probably a dog will value chicken or other meat over dry dog food, and my bird Barnaby will value a piece of cream cheese over a pellet. After a big meal, an animal may be less motivated by food. After a long exercise (and once settled), an animal will probably be less motivated to do activities, and will value resting instead. On the other hand, after a long nap a puppy is going to be ready to play. A dog sitting at a door may value the opportunity to smell flowers or run in the grass.

By being aware of what kinds of reinforcers are available for a pet and its family in everyday situations, and teaching the family how to choose the reinforcer their pet values most at that time, you can increase the value of the behavior you are teaching by following it with (or I should say, marking the behavior with a click or verbal word that is followed by) a highly reinforcing consequence. In the story above, that consequence was the opportunity to chase or tug. With enough pairing of a behavior such as sit with a valued consequence such as meat, a game of tug, or a game of chase, the less probable behavior (like sit) will become more probable.

This game is terrific for teaching several skills in addition to sit. It works on self-control and the ability to turn active movement on and off. You can also build up to working on duration as you wait longer in between marking and releasing the behavior to play.

A simplified series of steps:

Variations of this game can include different reinforcers, such as the opportunity while on leash to greet someone or sniff the grass, the opportunity to get a leash attached, or any activity that gets your—or your clients’—dog’s tail wagging.