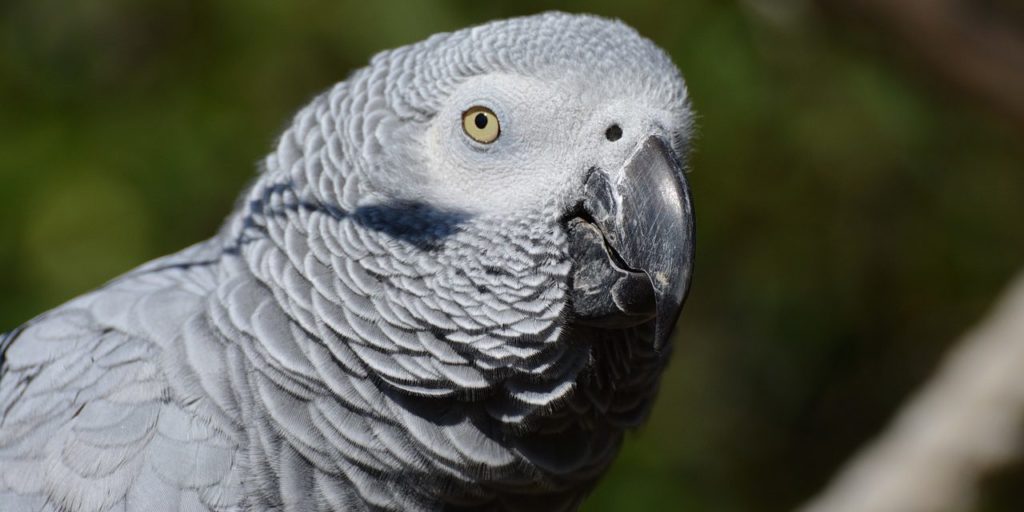 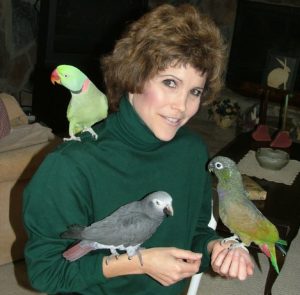 Chester, Barnaby, Dreyfuss, and me.

If you have ever shared your home with a feathered friend, you more than likely understand why I added two exclamation points at the end of that word. For us as humans, screaming is one of the most annoying, painful, and downright unacceptable natural behaviors of companion birds. It is the source of much frustration, irritable family members and neighbors, and ultimately the search for new homes.

It is also one of the most frequent problems for which parrot behavior consultants get contacted.

My interest is a very personal one.

Eighteen years ago, my little grey feathered friend came to be among my flock. Barnaby was just over 3 months old when I picked him up from the airport. I was enamored from that first moment I opened his crate door. That sweet boy came right out and onto my hand, and from there, stretched his head up to touch his beak to my cheek. He would step onto other people’s hands in that same way. For that matter, he walked right into his cage to check out his new digs without any hesitation at all.

Equally important here, he just looked at my other two birds with relaxed feathers before going back to his own activity. Chester, my Alexandrine ringneck parakeet, would follow Barnaby on the floor, and Barnaby still would ignore him. Later, I used to carry all three of them with me around the house. 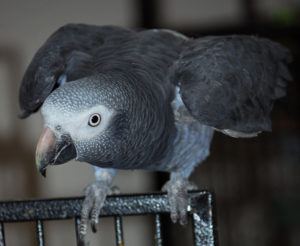 The honeymoon ended for me about six months after Barnaby’s homecoming, when he decided that the occasional high-pitched sound Chester made was actually pretty cool. Barnaby’s first vocalizations in my home were his version of Chester’s scream…only about 100 decibels louder. Did I mention that Barnaby practiced this sound a lot, every day?

At that time there was not a whole lot of information on the application of science in solving pet behavior problems, and definitely not a whole lot on the use of positive reinforcement. To teach Barnaby not to scream, I tried different strategies I had read about like covering his cage, yelling at him, and “trying” to ignore him, but nothing helped. I can remember being in tears one day thinking I may not be able to keep him because I just could not tolerate his vocalizations.

It was then that I first discovered Dr. Susan Friedman. Her teachings not only helped me to solve this problem (and are the reason that Barnaby is a prolific conversationalist to this day, because human sounds are heavily reinforced), they changed my whole outlook on behavior and opened the floodgates of learning for me. Ultimately, it was that experience that changed my course in life and took me down the path toward dog training too.

As painful on the ears as incessant screaming can be, as consultants we must remember that the behavior of vocalizing this way is of value to the bird. It is serving a purpose for the bird. Otherwise, the behavior would weaken or extinguish.

To solve the problem in the most positive way, we must first ask questions and observe to get to the root of problem. There are always environmental factors surrounding behavior that impact its occurrence, and consequences that cause it to maintain, strengthen, or weaken.

The very first step is to closely assess the specific observable, measurable behavior. As Dr. Friedman has pointed out in our IAABC Parrot Division Chat Group, this avoids “throwing spaghetti on the wall”—trying a lot of different things all at once and hoping that one of them will stick. Also, without this step, your plan may even inadvertently reinforce the very behavior your client finds so difficult to live with.

A functional assessment is a systematic process of gathering information on environmental events that both predict and weaken, maintain, or strengthen specific behaviors. It involves asking, “What precedes the behavior that sets the occasion for it to begin (antecedents) and what occurs just after the behavior (consequence) that gives the behavior value?”

There are three things to consider that can impact the behavior of the bird prior to it ever occurring. Cues or discriminative stimuli signal what behavior will likely be reinforced. A phone ringing, doorbell sound, favorite person leaving the room, or guests walking in the room can all be examples of cues for a bird to scream. Establishing operations are existing conditions that temporarily change the effectiveness of the consequence. Access to a favorite food will have an impact on an animal’s value of that food. Rest or fatigue will impact the bird’s desire to move or be still. And setting events are the context or circumstance in which an environment-behavior relationship occurs. Noisy environments, cages in high-traffic areas, and location of a perch are some examples. A bird may be less likely to scream, for example, if its cage is or is not placed near a window or in a room where you spend most of your time.

Important information to gather then begins with what is the exact specific observable or measurable behavior your client wants to change. Then gather information about when that problem behavior is and is not most likely to occur (what are the antecedents for the behavior?); and what occurs immediately after that problem behavior to give it value for the bird (in other words, what is the bird’s “payoff” for that vocalization?).

In my own case, Barnaby’s target behavior was his loud vocalizations with maybe one or two seconds between loud calls. This could go on for long periods of time and happened throughout the day. It occurred both when he was in a separate TV room by himself and when he was in the birds’ room with the other two birds. It also occurred when I was in the room with him but was not paying attention to him, when I would walk away from him, or when Chester made a loud vocalization or (I later learned) when Chester would perch on his door or side of his cage. Barnaby did not make his loud vocalizations when he was on me, when I was actively giving him attention, when he was engaged in a foraging or other activity, or when he was sleeping.

My behavior modification plan included many elements—both changing the antecedent arrangements and changing the consequences for Barnaby’s screaming behavior.

Because Chester’s vocalization and body language was both an antecedent and consequence for Barnaby’s loud vocalization, I came to realize I needed to give Chester a lot more enrichment also, so that he would be less likely to engage in behaviors that would cause Barnaby to vocalize. I began filling Chester’s cage with more enrichment items like blocks of wood that I made into foraging activities, cardboard boxes, and rolled-up phone books.

Other antecedent changes to preempt Barnaby’s behavior included involving Barnaby in more of my activities at home, changing the configuration of Barnaby’s cage to increase the probability of his use of toys and foraging activities, and giving him more foraging opportunities. Since one of the times Barnaby was likely to vocalize was when I was walking away from him or turned my back to him, I made sure that before I did that, I would give him something for him to be engaged with like a bead (which kept him focused briefly) or a foraging activity.

Additionally, I spent 10 to 15 minutes with Barnaby (and all the birds) in the morning and evening, with them on me, as well as learning and practicing novel behaviors. This strategy is called an establishing operation, meaning it gave Barnaby (and all of my birds) both my attention and exercise, which made quiet rest or focus on foraging activities more reinforcing than the attention he received for loud vocalizations.

I looked for another vocalization Barnaby made that was acceptable to me and could not be done simultaneously with his 110+ decibel bird scream vocalization, something that I could reinforce in a big way. In the beginning, it was a whistle call but I quickly learned he could put some incredible volume to that sound. <ugh!> I’m sometimes embarrassed to admit this but I’d say “Mommy here” when I went into their room, and he repeated that one day. Bingo! That became the replacement vocalization. The very second that he said that phrase, I was prepared to run into the room he was in and give him a seed and attention. If I turned my back on him and he said “Mommy here,” I immediately turned back and gave him some attention.

If he did his loud bird scream while I was out of the room I would immediately stop moving so as to avoid inadvertently reinforcing him with the sound of my movement. If we were in the same room, I would turn my back to him and remove myself from his sight

He got huge reinforcement for saying “Mommy here,” and no reinforcement—sometimes a mild P- in the form of me turning my back to him—for his loud scream.

However, over time, while I acknowledged “Mommy here” with saying something back to him from wherever I was every time, I began adding small bits of time, incrementally increasing in time, in between my calling back to him and actually going in his room. Additionally, with his having more enrichment activities, he was less likely to vocalize as often.

This multi-tiered approach is the reason I now live with a prolific talker who has conversations with me throughout the day. With Chester not being with us for many years now, Barnaby has especially learned to use his human language to get his needs met. Sure, there are times when Barnaby lets out one of those loud vocalizations I call SCREAMS, but not very often. I’m now aware of the importance of not giving him any attention for it.

Instead, every day I wake up early to quietly begin my computer work in the basement until I hear that voice resonating through the house: “Mommy here!”

And with that, my two feathered friends begin their day too!