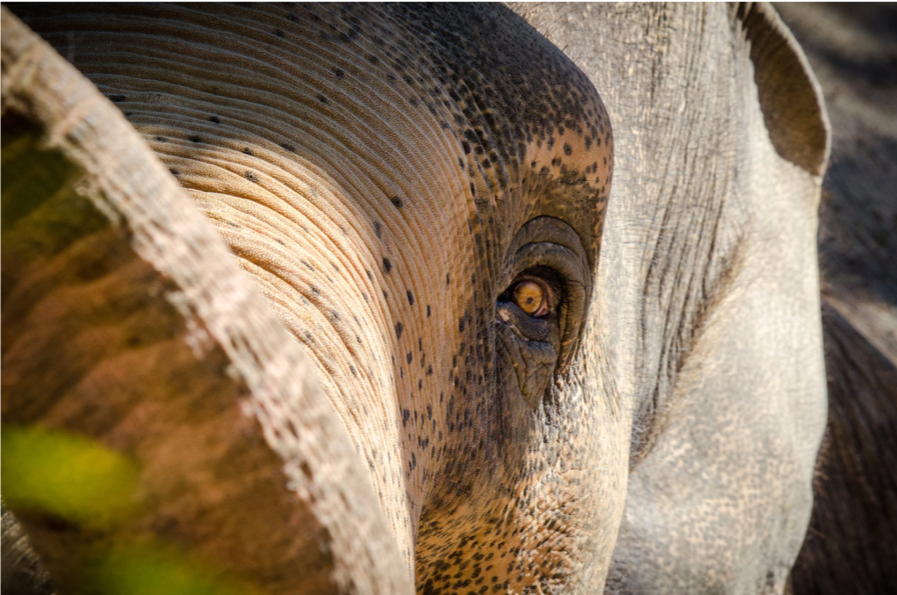 There’s a conundrum when it comes to the training and behavior management of animals in zoos: Training may be considered important for the management of animals but is often viewed as a luxury.  It’s not uncommon to hear keepers make statements such as, “I’ll train if I have time,” or “Training would be great, but first…” There’s a multitude of reasons why this philosophy exists, including:

(1) Exhibited animals have biological needs that must come first, like eating.

(2) Every keeper has a never-ending list of those essential biological requirements that must be met.

However, the problem as we see it is not the reality of those factors, but that training and behavior management might be viewed as nonessential or luxurious. More specifically, that training is viewed as anything other than an endeavor that saves time.1 We put time in now to train and manage the behavior of our animals through positive reinforcement, so that later, it doesn’t cost time. Training is a behavior investment.

A skeptic of the above might ask, “How does putting time into behavior result in saving time?” The simple answer is that behavior is always happening. How we manage that behavior changes how much time we spend with that or similar behaviors in the future. If we look at this challenge in practice with an eye on behavior management, we can conclude that we respond to behavior all the time. The challenge is to understand how what we do affects our animals, because only then can we effectively change it. What we regularly do (i.e., how we behave) produces a set of antecedents and consequences for the animal, planned or not. For example, whenever an animal hears keys or equipment, or sees veterinarians and other caregiver staff, they respond. The animals can develop fear responses or other unwanted behaviors due to the routine we present the animals with on a daily base. Everything we do in a day affects the lives of the animals we work with.

To be able to understand how this works we look to the outcome for the animal. Keys are heard, a door opens, and food is given. If this is routine for the animal, then they associate these events with getting food soon. A small zoo car with food in the back comes to the exhibit of the designated animal, the car is heard from far away, the animals respond and anticipate the event, in some cases even jumping. The zookeeper feeds the animals and goes to the next exhibit. All these factors happen in the zoo regularly. Behaviors that we see as a problem are often responses we have directly consequated. No behavior exists in a vacuum. In fact, behaviors have as much to do with the environment-behavior interactions and contingencies as they do with that species itself. To find a solution we must ask ourselves, “What happens before and after I see that behavior?” We can then use these events described above to start training our animals for what we would like to see.

In short, behavior happens all the time, and thus, so should behavior management. Putting some effort into training and managing behavior now (e.g., behavior investment) means saving time it might otherwise cost us later. Below are just a few examples of how we can recognize some of these events in terms of the antecedents, behaviors, and consequences that happen, and what we can do to arrange the environment so that we appropriately reinforce the behaviors we want to occur.

European bison and shifting for rewards

The European bison at Kolmårdens Wildlife Park in Sweden have an enclosure divided in two parts: the main exhibit and the holding area. For the visitors to see the animals, the bison must be in the main exhibit. This means a considerable amount of moving (shifting) the bison between the two areas. Previously, the bison were moved between the two areas by keepers driving a vehicle into one of the areas, driving the bison away from the vehicle. Thus, a set of aversive contingencies were put into place: vehicle drives forward (aversive) – bison move – removal of vehicle chasing bison. While this was an immediate solution to moving the bison, it relied on aversive contingencies to move the animals, and conditioned the vehicles (and the keepers!) as aversive stimuli. It was not only time-consuming, it made for potentially dangerous scenarios for both the bison and the keepers. Bison could choose to aggress in response to a vehicle, potentially injuring themselves or keepers in the process.

As an alternative, the keepers implemented a positive reinforcement-based program to reward the bison for approaching the keepers and moving on command. The procedure began with changing the association the bison had with the keepers from an aversive one to being offered treats in the presence of the keepers. Keepers then began reinforcing movements toward the keepers, eventually putting the movements toward the keepers on cue (see picture of bison being rewarded for approaching a keeper). The cue and the conditioning procedure were generalized to different places and people offering the cue, including veterinary staff. The result was an effective positive reinforcement-based recall procedure, where bison could be moved easily and safely across the entire exhibit. Through investing in some training upfront, the bison could now be shifted across their enclosure without aversives, saving considerable time and energy for everyone involved. 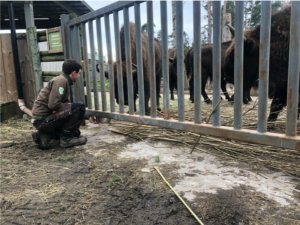 Training penguins to use enrichment items

The application of enrichment in zoos has become commonplace to manage the welfare of zoo animals.2,3 Most of us now recognize the importance of providing animals in zoos with these enrichment opportunities to forage, investigate, and otherwise interact with their exhibited environment. But what happens when animals choose to not interact with the enrichment items or events that we introduce into their exhibit? Do we spend time and resources engaging in trial-and-error enrichment introductions until we find something, anything, that works? Or could we invest time in training procedures that make interactions with some enrichment item or event more likely?

In one such example, Fernandez, Kinley, and Timberlake demonstrated that enrichment devices (i.e., two hamster balls filled with small fish; see picture) did not engage penguins at the Cincinnati Zoo in either time spent swimming or interactions with the devices.4 However, when they invested time in training the penguins how to interact with and pull fish out of the devices, they increased both swim time and contacts with the device. What’s more, reintroducing the penguins to the enrichment items in the absence of any continued training achieved the highest levels of both time spent swimming and contacting the devices for the rockhopper penguins. Training plus enrichment was successful at producing lasting enrichment change! The penguins, effectively, had learned to fish enrich for themselves. 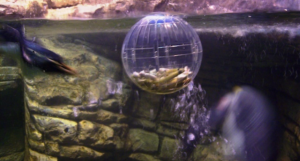 Reinforcement doesn’t always come from a food source. We discovered with Tonsak, a 20-year-old Asian elephant bull located at Kolmårdens Wildlife Park that reinforcers could come from the ability to interact with the keepers themselves. As training sessions and interactions with keepers progressed, Tonsak began to anticipate those keeper-elephant interactions, greeting keepers as they would approach. However, some of this anticipatory behavior was reflected in pacing or other repetitive movements in the mornings prior to Tonsak’s keeper interactions.

When the zoo began to examine the events surrounding these behaviors, a curious set of antecedents emerged. Lights were turned on for Tonsak’s night enclosure at approximately 6:30 am, with keepers arriving to greet Tonsak at 7:00 am. The lights themselves functioned as conditioned antecedent stimuli (discriminative and conditioned stimuli [Sd; CS]), reliably predicting keeper interactions and training sessions.

To reduce this anticipatory pacing behavior, keepers made the timing of the light variable and introduced an automatic feeder that also dropped food on a variable-time (response-independent) schedule. Keepers also waited to start training sessions or interact with Tonsak until he was not engaged in any repetitive movements, to make sure they were not reinforcing these responses. The result of all the above was a reduction in the pacing and other repetitive movement patterns while still maintaining the desired anticipatory responses to interactions, such as greeting the keepers. An examination of the events that happened before and after Tonsak’s behaviors allowed the keepers to adjust their behavior accordingly to promote the best practices for Tonsak’s welfare. 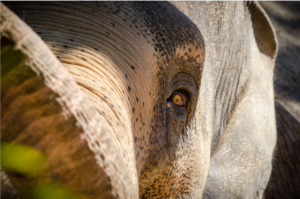 Summing up: Investing in future behavior

The above are just a few examples of ways that investing in behavior now ultimately saves time. Through recognition that behavior is always occurring and that animals are always learning, we can better assess and plan for the antecedents and consequences of those behaviors. Investing in the training and managing of behavior now means spending less on those behaviors later. Viewed this way, a small cost in training and managing behavior now means less cost overall, since a lack of training would require more time and energy spent on handling those behaviors later (behavior is always occurring!).

It would be simple enough to conclude this paper with a summary of the points already made, but there’s another, equally important direction we’d like to take: How do we make behavior investment happen? We believe that training and managing behavior through positive reinforcement saves time for all of us later, and we guess that most readers believe this as well. But how do you convince others of these arguments? Namely, how do you convince your own management that their investment in allowing you to train and manage behavior will save them and the zoo time and energy?

We hope that one effective strategy is giving them this article to read. In fact, one of the main inspirations for writing this article is just that: convincing as much zoo management that spending a little time on training now saves a lot of time later. If you happen to be one of those managers reading this article, kudos to you for taking the time to recognize something your own staff feel is important. It’s worth noting that positive reinforcement is an effective motivator for the behavior of all organisms, zoo animal, keeper, and manager alike. Understand the contingencies involved making your managers allow you to spend more time training, and reward them appropriately for allowing this to happen. Antecedents, behaviors, and consequences (ABCs) are an effective way to understand and change all behavior, and the first step in thinking this way begins with you, the reader.

Dr. Eduardo J. Fernandez received his Ph.D. in Psychology (minors in Neuroscience and Animal Behavior) from Indiana University, and his M.S. in Behavior Analysis from the University of North Texas. Much of his past and current work involves the behavioral training and welfare of zoo, aquarium, and companion animals. He is currently a Visiting Assistant Professor in the School of Behavior Analysis at the Florida Institute of Technology. He will begin his new position this summer as a Senior Lecturer in the School of Animal and Veterinary Sciences at the University of Adelaide in Australia.

Peter Giljam studied animal care in the Netherlands which got him his first job in a zoo. Since then he has worked in 4 different countries with a variety of different species. He has trained animals for over 15 years. He is the owner and founder of Zoospensefull, an online informative platform for animal caretakers and trainers. His focus is to better the welfare of animals in human care through behaviour modification. Besides Zoospensefull, he has a full-time job as Animal Training Coordinator in the biggest zoo in Scandinavia, Kolmårdens Wildlife Park.