Relapse of Conditioned Fear in Horses: The Four R’s 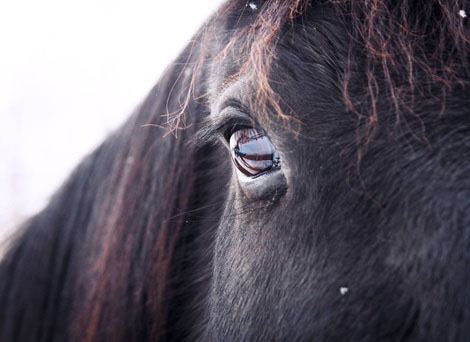 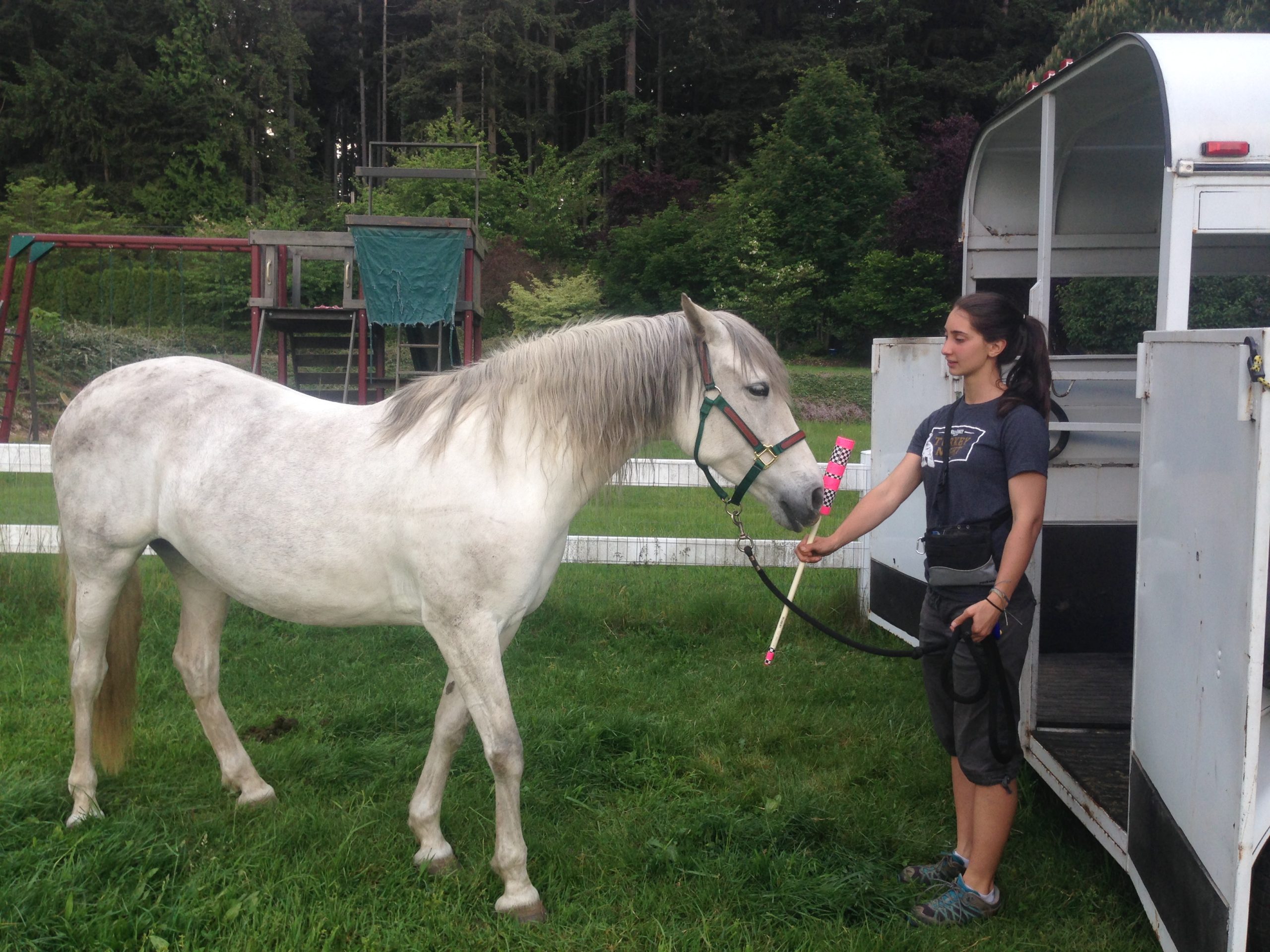 Targeting is an operant behavior that can be used alongside respondent conditioning to minimize anxiety and reduce risk of relapse.

My 18-year-old thoroughbred is a warrior in most respects. He barely flicks an ear at a motorcycle speeding past as we cross the road; he nods politely and winks at a large coyote standing at the trail’s edge (in truth, the wink may just be a tic in his bum right eye); and he grazes without pause as a giant red cedar is felled in the adjacent field. There is one exception to his cool confidence—the bimonthly farrier visits. He jigs and jogs, leans and sways, twitches and tosses his head. And that’s before the farrier has even picked up a foot.

How can behavior problems related to fear and anxiety be eliminated?

Many behavior problems in horses are rooted in fear and anxiety. Common examples include needle shyness, refusal to load in a trailer, and fidgety or aggressive behavior at the mounting block. In each example, the emotional and behavioral reactions presumably were learned through some experience that created an unpleasant association between the needle, trailer, or mounting block (the conditioned stimulus, or CS) and stress, discomfort, or pain (the unconditioned stimulus, or UCS). Often the particular incident that created the fear is unknown, but even one painful or stressful experience can result in fear conditioning.

Systematic desensitization is a tried-and-tested behavior modification technique used to extinguish conditioned fear and anxiety. It involves presenting the CS (the needle, trailer, or block) below threshold, without triggering the escape or avoidance response. Repeated exposure to progressively increasing intensities of the CS, in the absence of the aversive UCS, gradually eliminates the fear reaction. For example, desensitization of needle shyness involves repeatedly exposing the horse to a syringe (CS) without pain or stress (UCS). The syringe is presented gradually and progressively until the horse can be injected without showing any signs of fear or flight. At this point the needle shyness has been extinguished.

Why are extinguished fear and anxiety vulnerable to relapse?

Exposure-based behavior modification techniques like desensitization are effective at reducing fear and anxiety, but unfortunately relapse is common. One reason is that extinction does not erase fear memories, thus even when a conditioned fear response seems to have disappeared it can abruptly reappear. Relapse can occur through one or a combination of processes, including the simple passage of time (spontaneous recovery), a novel context (renewal), and after an aversive event (reinstatement). Conditioned fear can also return suddenly following even one experience linking the CS and aversive UCS (rapid relearning) again.

Spontaneous recovery is probably the most widely recognized cause of relapse. In horses, desensitization sessions often end immediately after the fear response disappears, with much celebratory back-patting and wither-scratching followed by a break. Later, when the CS is reintroduced, the horse becomes anxious or fearful again, even though nothing happened during the rest period. The competing memories of fear-expression and fear-suppression are thought to be the reason for spontaneous recovery, with the stronger memory of fear-expression prevailing. Spontaneous recovery is more likely and more intense with longer rest periods, and relapse is a potential problem when events are periodic or infrequent. For example, my horse with farrier phobia has undergone successful desensitization for trimming and shoeing, but when a long break separates the end of desensitization sessions and the next farrier visit, the fear returns; sadly, his old memories of fear-expression during farrier work must be very strong.

Renewal can occur when the fear is successfully extinguished in one context, but reappears in different contexts. The context in which desensitization sessions take place may function as an “occasion setter” that inhibits the fear response. In one case involving a trailer-shy horse, after about a dozen desensitization sessions, the horse loaded into the trailer without showing any signs of anxiety or avoidance. The problem relapsed suddenly when the owner purchased a new trailer, and renewal was the likely cause. In another case, the trailer-loading desensitization sessions were all carried out at the boarding facility, but on the first trip to the mountains for a long-awaited trail ride, the horse refused to load on the way back because the location was different. The horse’s anxiety had been extinguished at the farm, but not at other locations.

Targeting is an operant behavior that can be used alongside respondent conditioning to minimize anxiety and reduce risk of relapse.

Reinstatement refers to relapse that occurs when the horse experiences any discomfort, pain, or stress (the UCS) in the same context in which the fear was originally learned. In one case, needle shyness was extinguished and the horse no longer reacted to the syringe or injections. A few months later, the horse experienced pain and distress when the veterinarian examined a leg injury. To everyone’s surprise, the needle phobia returned even though the pain had nothing to do with an injection. Reinstatement tends to be context specific; the link between the same vet and the same location with any pain led to reinstatement of the needle phobia.

Rapid reacquisition of classically conditioned fear is a common reason for relapse. Reacquisition happens when the horse experiences the same CS-UCS association that led to the conditioned fear in the first place, and is a particular concern if it occurs soon after extinction. Rapid reacquisition explains relapse in one case of a lesson horse that showed anxiety, fidgeting, and redirected aggression at a mounting ramp. Even after extensive and successful desensitization training, the horse quickly relapsed. Back pain associated with rider mounting was the cause of the behavior problems at the ramp. The pain was recurrent, so the horse rapidly reacquired the full scope of behavior problems when a rider mounted and caused back pain.

How can relapse of fear and anxiety be prevented?

Knowing that extinguished fear reactions are vulnerable to relapse, a few strategies can be incorporated into a behavior modification plan that will improve the long-term effectiveness of desensitization. The methods listed below have proved effective in studies of fear extinction in laboratory animals, and may also help minimize the risk of relapse in applied behavior modification.

•  Expose the horse to a lot of desensitization sessions that continue even after the fear response disappears. Increasing the number of extinction trials above and beyond what is needed to inhibit the unwanted behavior is called “massive extinction training.”

•  Get right back up onto that horse! When extinction sessions begin immediately after fear acquisition, the risk of relapse is reduced. This procedure is called “immediate extinction,” and it seems to interfere with the formation of the fear memory.

•  Conduct extinction trials in different contexts, locations, and situations to reduce the unwanted effect of renewal.

•  Train in cycles of desensitization and rest to reduce the likelihood of relapse due to spontaneous recovery, which will diminish with each cycle.

•  Combine desensitization with counter-conditioning, which is a technique used to create a new association between the CS and a pleasant, appealing UCS, such as food or relaxation.

Include unique signals during desensitization sessions. These extinction cues signal the absence of pain or discomfort and promote fear inhibition, reducing setbacks caused by spontaneous recovery and renewal. For example, using a unique location during syringe desensitization can be a contextual cue for extinction that signals the absence of discomfort, and subsequent veterinary exams and injections can take place in this location.

Robin Foster, PhD, CAAB, CHBC is a professor at the University of Puget Sound in Tacoma, WA, and an affiliate professor at the University of Washington. She has taught courses in animal learning, behavior, and communication for more than 20 years, and conducts research on behavior and welfare of working and sporting horses.  She provides behavior consultations, clinics, and educational workshops in the Seattle area through Adaptive Animals, LLC.