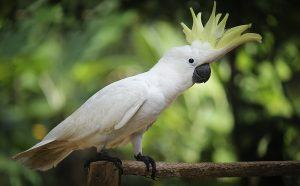 I adopted a male cockatoo from an animal shelter in February 2007. His name was Charlie, and he had obviously been neglected physically, emotionally, and socially. At that time, his diet consisted solely of Cheerios. He was plucking his feathers and fearful of people. When approached he attempted to increase the distance between himself and the person; if he could not, he bit.

My first goals were to optimize nutrition and enrichment.  The cage was 24 by 24 inches at the base, and 30 inches tall. It had only one perch, one food dish, and one water container. He stood there day and night. I placed him in my aviary in a much larger cage (3½ by 2 ½ by 5 feet), which I partially covered because he was constantly startled by movement, and remembering that he spent so much time covered, I thought he might be more comfortable partially covered. He remained partially covered until he decided to spend more time in the other part of the cage, looking out and around. When he was spending all of his time in the open uncovered portion by his choice, I removed the cover.

I chose to feed Charlie a name-brand food for parrots that was strikingly similar in texture and appearance to the cereal, and began to mix it with the Cheerios. I provided him with many different objects to shred, chew, and manipulate. This provided him with the ability to engage in some normal behaviors

Within a week, I was amazed to discover that he was eating the parrot food, and I was able to eliminate the cereal. I began to add some vegetables, and it took a month for him to start to sample them As long as he was able to put distance between us, I was able to clean his cage. He moved to one side of the cage while I cleaned the opposite end, and then to the other side while I cleaned that.

I began to “name” my activities to increase his level of comfort and provide him with as much usable information as possible. I began to say “knock, knock” just before entering the aviary and “hi” to inform him I was about to open the cage. This greatly lessened his defensive behavior, and he began to say “hi” when I approached the cage. We were developing a routine that he could predict, and I was able to uncover the portion of the cage I had previously kept covered.

His plucking had decreased. However, when I cleaned the floor and windows, moved any of the cages, or had other birds out of the cage, he would resume plucking for a day or so. I began to “name” the moving of the cages, the vacuum, the mop, and other birds, and started to do these things in the same order daily. Within the month, when I said things like “mop” he would look at the mop and, I think, knew what to expect. His feather plucking continued to diminish until it finally extinguished approximately four months later.

At this time, I wanted to teach him how to accept the necessary husbandry procedures. He had no interest in food rewards, but was beginning to enjoy attention. I determined this by his tendency to approach the front of his cage when I entered the room, as well as his decrease in retreating when the cage was opened. Attention was the only tool I had to use as a reward at the beginning of his training. He seemed to enjoy it when I spoke to him, especially when I said “hi” and opened the cage. His enjoyment was evident—he approached the front of the cage and vocalized. We failed with the husbandry procedures at this point because of his reluctance to be handled. He panicked—shrieking and trying to bite—when I tried to touch him with the cage door open, and retreated when I attempted to touch him through the cage rails.

I decided instead to try to teach him to move part of his body in any direction in exchange for some additional attention. When he would pick up his foot to obtain a piece of food, I would wave my hand and then provide attention. He was a fast learner and within a few days I tried waving, and he picked up his foot and moved it slightly up and down. I always laughed when he did this, and soon he began to mimic my laugh after waving.

All along, I had been giving him all types of food such as peas, carrots, apples, and broccoli, as well as other fruits and vegetables, most of which he ignored. He finally began eating small pieces of apple. He also began to enjoy a “shower” in the cage every other day. I used a spray bottle and desensitized him to being sprayed by naming it ”spray,” and misting once and dropping a small piece of apple into a bowl. Gradually I increased the amount of spraying, which he thoroughly enjoys now. It is self-reinforcing, and he no longer needs the food reward.

Progressing to bridging and targeting

He also began to enjoy getting a drop of water from the sprayer. I used another sprayer to hold some apple juice. Since I finally had a suitable food reward, I taught him both the terminal and intermediate bridges using a small drop of juice as a primary reinforcement. I could now reinforce his words and the wave. The terminal bridge signals that the behavior has been completed—the intermediate bridge is a form of feedback indicating to the animal that they are on the right track heading towards the terminal bridge

As he became more comfortable, he would put his foot through the bars of the cage, and grab at my clothes or hair. I began to hold my thumb out as a target, and he would grasp my thumb. I named that “shake” and soon he would hold onto my thumb when I approached and said, “shake.”

We progressed to pole targeting. I chose to use a plastic target with a clear handle and a bright blue ball on the end. He will target both feet and his beak to the pole and follow the pole as well. He will also hold the blue ball with his foot for about five seconds while I touch his feet. Having named the clipper, “clipper,” I can now clip one claw at a time while he holds the ball on the target pole.

I am allowing him to come out of his cage two to three times a day for up to an hour at a time. I also named petting—when I say “ahhh” and he moves towards me, gives me his side, back, or head, I pet him there. If I say “ahhh” and he does not come to me, I do not force the issue. I simply do not touch him—however, he responds positively more often than not at this point.

I believe that using the behavior bridge and target training, alongside plenty of enrichment, have helped him become much less anxious, and consequently he is a much safer and healthier bird.

This was several years ago, and Charlie is now named Caesar. He has been with me for 20 years and is living a happy, healthy life.

Adapted from an original article published in the IAABC Journal, Fall 2007.

Debbie Winkler, CCPDT-KA, CABC, is one of the founding members and former vice president of IAABC. Debbie works with both domestic and exotic animals and teaches training and behavior.