Cat-Cat Play: The Good, the Bad, and the Ugly 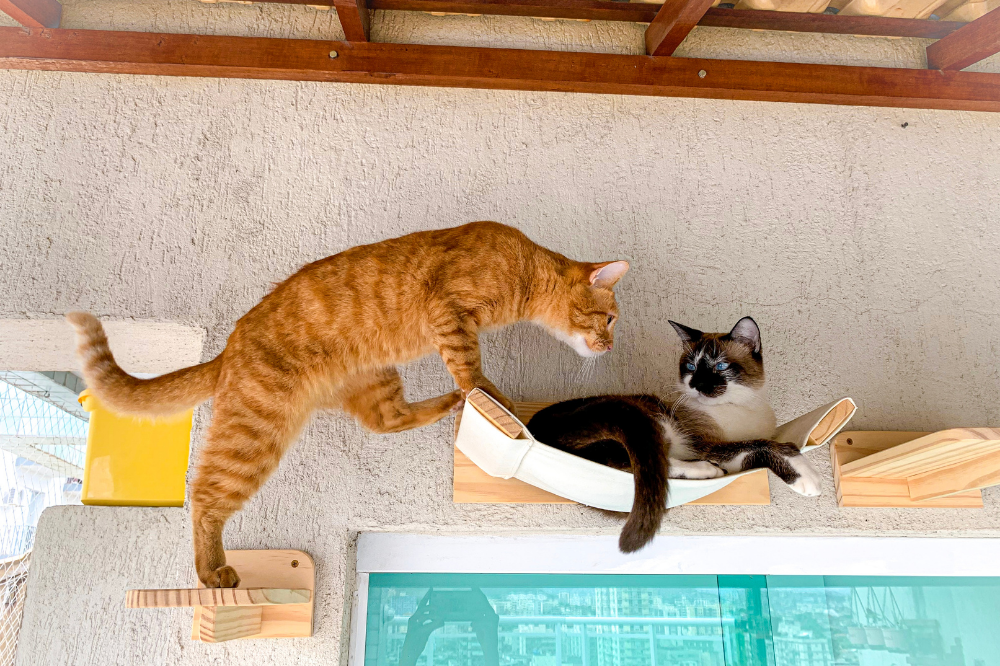 Summary: Play is an important part of cats’ wellbeing, and in a multi-cat household it can provide exercise and enhance social bonds. Cat guardians should be able to recognize when play is healthy and when it is showing signs of turning into non-play aggression so that they can take steps to redirect before harm is done. This article explains some play solicitation behaviors in kittens and adult cats and illustrates with video how to distinguish sociable play, aggressive behavior that might be mistaken for play, and behaviors that are intended as play but are potentially dangerous because of a mismatch in individual play style.

Play is good exercise for the body and mind, and also creates social bonds. But how can you tell if the cats are playing or fighting? Let’s start with an easy case. The cats have many pauses between swats, chases, and pounces. During these pauses they have loose bodies, and may glance here or there. Their ears are forward or to the side, in a loose manner – they move a bit, and are not locked into place. These cats may seem half-hearted in their attacks – they may stop short of contact, landing a pounce next to the other cat. Or they land on the cat, then shortly disengage. And they paw or bop the other cat, instead of raking the cat with the claws. And far from responding by running away, the other cat stays engaged. Their attacks are relatively harmless maneuvers: a few pokes, or a light-hearted tussle. At the end, they walk away. Or one scampers away or leaps into the air, and the other cat ignores that cat. Most people have no problem identifying these cats as playing.

Sometimes it’s a bit harder to tell. Play can get pretty rough-and-tumble. This is most often seen in kittens and young cats, but some middle-aged cats are surprisingly athletic in their play. This is the type of play that some people worry is a cat fight. A cat may stalk the other cat and land directly on them, pinning that cat down. A cat may use the back claws to rake the other cat while gripping them. There may be vocalizing, and the ears may flatten momentarily. That is the key – momentarily. In between the rough stuff the ears are forward or to the side in a loose manner. They do not stare between bouts. Even if there is more body slamming than in the aforementioned easy case, there are breaks afterwards, and they take turns being the attacker.

There are some classic ways cats solicit play from another cat. An example is the sideways hop of many playful kittens. Interestingly, this form of play solicitation is not used by adults.1 According to John Bradshaw, author of The Behaviour of the Domestic Cat, one reason it fades away may be because it is not often successful. The other kitten tends to imitate that sideways hop, and the interaction ends there. Bradshaw has found that successful opening moves elicit a reversal of roles – the attacker becomes the attacked, and then becomes the attacker. An example of this sequence is one cat stands on their hind legs, and the other one responds by rolling on their back exposing their belly. Far from being submissive, this position enables the powerful hind legs to engage the attacker. If the standing cat pounces, the cat on their back can grab with the front paws and rake with the hind claws. Or they can flip the attacking cat. Then they stand up, and the other cat may roll on their back, ready to go. In this video you can see the little white kitten grab the bigger kitten with her front paws, and pull him to her so she can rake him with her hind legs.

What Bradshaw calls belly up and stand up are both opening moves, but the move most likely to lead to play is the pounce.1 Whatever the sequence, it tends to be the same each time between two regular playmates – they know each other’s moves, and it becomes a bit of a dance. When learning how to play with a new playmate, there may be some squealing or a hiss if one cat is too rough. But a good playmate will then back off. Next time that cat will pull their punches when they bop with their front paws or rake with their hind ones. Here is a video of polite play. You can see the cats pausing, pulling their punches, and taking turns as the attacker.

But how can you tell if a cat is being aggressive? One sign is if a move elicits an arched back, or classic Halloween cat, from the other cat. That is never seen when older kittens or adult cats are enjoying playing together. Don’t confuse this arched back with the playful side-step and horizontal leap seen in young, playful kittens though. Using this move as play is seldom used once a kitten is past 12 weeks old, and never in adults.1

Another thing to look for is what happens during the pauses in the action. If the cats are staring with their eyes locked on one another, it isn’t play. If the ears are pinned back when they aren’t tussling, it isn’t play. And growls aren’t often a part of play. Another clue is a pattern of one cat always being the attacker – this is either aggression or mismatched play. Either way, something must be done.

If one or both are aggressive, you should separate the cats and reintroduce them.2 If a re-introduction is not proceeding well, you may be better off just using a management strategy to keep everyone safe. This means they will need to be kept separated. You can create separate territories, or the cats can be swapped out of a safe room and the house at large.

It can be hard to distinguish play from aggression when it’s mismatched play. Here is an example of rough play between a small 20-week-old and a larger 24-week-old. At the end, the small, white kitten goes behind her owner – she’s had enough. This video was taken when these two were first allowed to have supervised play sessions, after having interacted nicely through a gate. You can see the black-and-white kitten is more relentless than in the first video I showed you. He hadn’t learned the little white cat’s limits yet. So, it’s a bit of a mismatched play style, although he does take a break when she arches her back at the end. He seems to understand he went too far.

I certainly don’t want to let cats with mismatched play be together all day long. I want short, supervised sessions, as seen in the video. This ensures that the one that is smaller, less relentless, or both isn’t stressed. And I want to offer many one-cat-wide perches for a cat that is done playing to go to and more easily defend. Although as seen in the start of this video of rough play, that may not deter an athletic playmate. But in one week, the black-and-white kitten went from this rough play style to the polite play I first showed you. These two cats have now been best friends for years. The careful supervision and short play sessions early on paid off.

This doesn’t always happen. Especially in the case of an older cat that does not want to play at all and a younger one who does. They may need to have daily time apart and easily defended vertical places throughout the house. They might even need separate territories. If one is old, arthritic, or suffering from any aches and pains, the cats need separate territories, or need to be swapped out from a safe room and the house at large indefinitely.

Patience Fisher owns Patience for Cats LLC, a cat behavior business based in Pittsburgh, Pa. She is an associate-certified cat behavior consultant through the IAABC. She holds a bachelor’s in biology and a diploma of feline behavior science technology, and is a certified veterinary assistant. Visit her on Facebook at Patience for Cats.