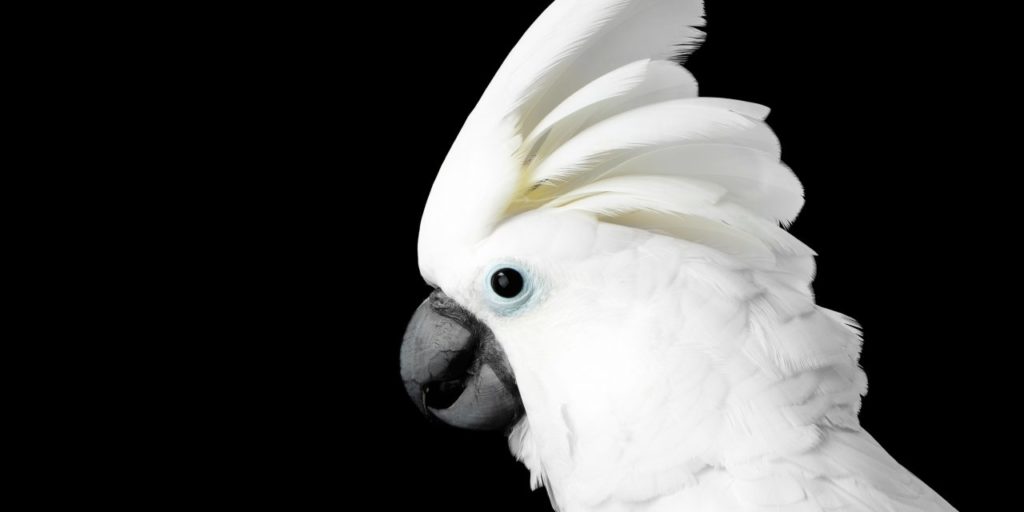 Many of our clients have been told not to pet their parrots. Don’t touch your bird here, don’t touch your bird there…but of course they (and we!) still want to, and can’t always resist. This leaves the question: What can we do, and what should we tell our behavior clients to do? Rather than talk about what not to do, let’s examine some ways that we can interact with a parrot and also what we might encourage our clients to do instead of touching and stroking parrots that can enrich our lives as well as theirs, and build a stronger relationship.

An ethological look at touch

Allopreening (to preen the feathers of another bird) has a clear social function amongst all birds. Some wild birds allopreen in groups after those groups have been in a fight. The more intense the battle between the birds the more intensely the allopreening behavior is performed, especially by the losers.1  Could this be defusing stress from the battle? This type of allopreening is not done to the head feathers, but is done on the feathers covering the body.2 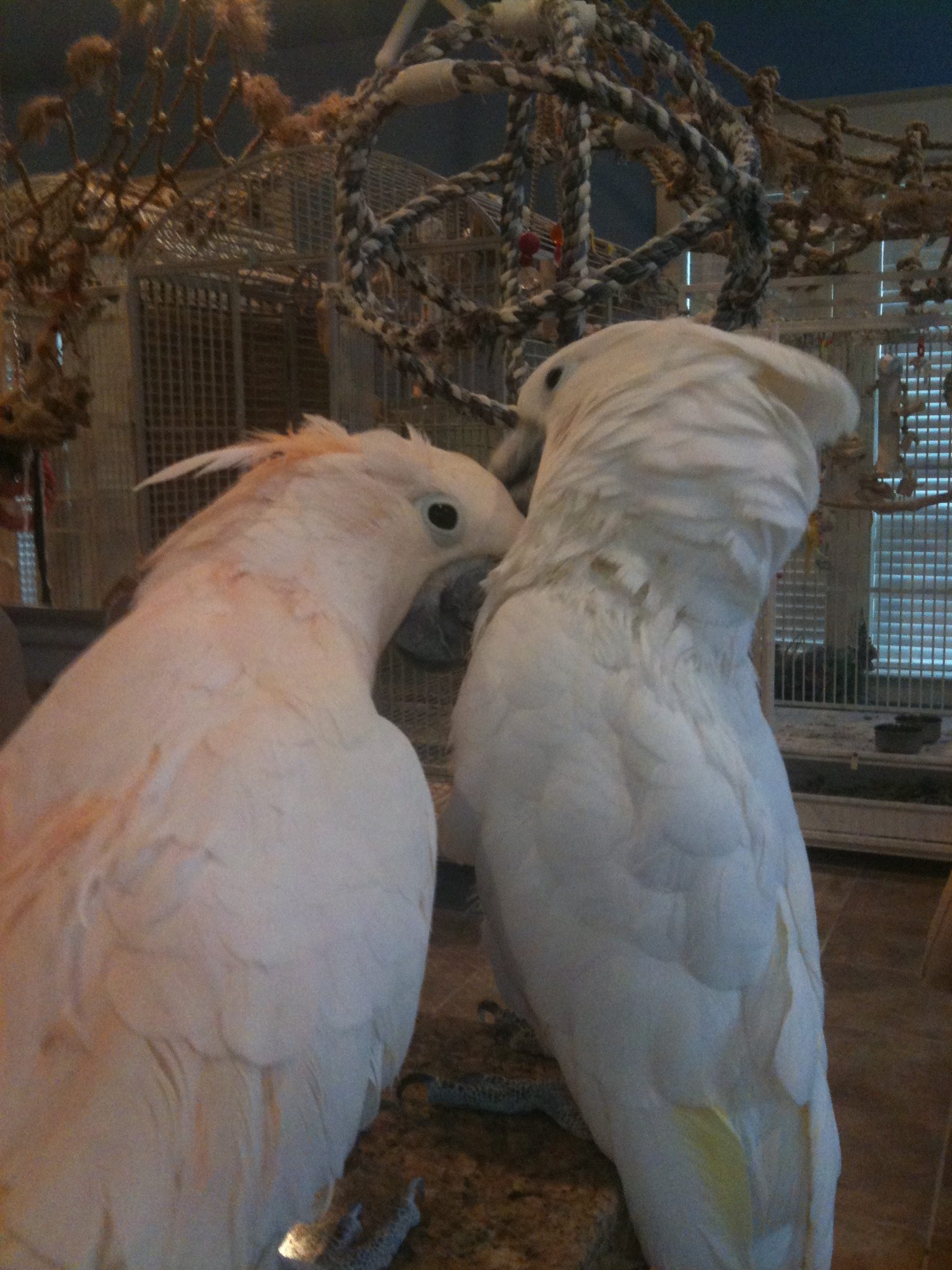 Two of my birds engaging in allopreening

Allopreening may also be seen after a skirmish over territory such as a nesting cavity site. After the skirmish the birds can usually be seen perching together and allopreening. Birds may also be seen lightly touching each other at times resembling what we might do when trying to reassure someone that things are OK. With parrots, this would most likely occur only between bonded pairs or their young.3

Allopreening is often seen in species that live close together, as many parrots do. The benefit of being preened by another is that it not only opens up head feather shafts that cannot be reached by oneself, but it is also helpful to have a partner checking you out for various bugs, such as ticks. Allopreening is known to greatly reduce the number of parasites and ticks on wild birds.4

Allopreening may also be used for courtship amongst parrots, for example running a beak down their partner’s wings and body before mounting and copulating.

Problems that too much touch can cause

Excessive cuddling and stroking in parrots and cockatoos may eventually lead to behavioral and medical problems. The most common of these are biting, excessive screaming, plucking, excessive egg laying, and cloacal prolapse.5 Umbrella cockatoos can especially be at risk for cloacal prolapse. It’s unclear whether excessive stroking is always a cause of this, but nevertheless the risk should be enough for us to suggest our clients change their behavior if they are engaging in excessive touch of this nature with their birds. Generally speaking, other parrot species don’t allow the same sort of mishandling or stroking that some cockatoo species (umbrella and moluccan cockatoos especially) allow. This intolerance for touch may lead to conflict as the birds become sensitized to the presence of hands and begin to use distance-increasing behaviors that can be upsetting for their owners, like biting.

Where, how, and when should we touch our parrots? The answer to that depends on the individual parrot and also that bird’s individual environment, since every home, aviary, and caretaker is different. Generally speaking, the place that we most often touch our birds is the top of their head. We can preen head feathers, and that preening will most often be appreciated, but not if we force it. There may be times, for example, when some parrots are not in the mood to be allopreened. If so, we can respectfully pay attention to that request, withdraw our hand, and try again later. The body language you may see telling you “no” could be a bird moving their head away from your hand by turning their head sideways. An invitation to preen would be a parrot holding their head down exposing their forehead and perhaps stroking themselves under their neck with one foot.

Generally speaking, female cockatoos are most often always willing to be allopreened, and some may even seem to beg for it, following you around with head down as if to say “Preen me, preen me!” It’s certainly okay to preen them as long as they don’t start ecstatic shaking (small tremor-like movements) because this is a sexual display. If you observe this, then stop preening them and redirect their attention to something else. For example, having them step up onto a perch and you sing and dance or whatever it is your bird may enjoy doing. My Moluccan cockatoo girls all want head scritches and preening, but I’ve found they are also just as happy to be put on a perch with play activities.

There are also times during the year when all I need do is enter a room or look at a cockatoo or parrot and they start to quiver or give sexual displays. If this is the case then any touching will only escalate the behavior. In my experience, this sort of behavior usually peaks in about a week, maybe two. During that time, they could still come out of their cage or aviary by stepping up, but then I would immediately and gently asked them to step up onto a perch and encourage them to do independent activities. Sometimes interacting at a different time of the day than usual may also be helpful. By coming in at a different, time you have changed the environment.

When can you touch a parrot?

I’ve found that in most cases, hugging or cuddling a bird can be fine as long as that hug is a short one, a few seconds, and we aren’t heavily stroking the bird like we might do with a dog or cat. Just a quick friendly hug like we might give to a friend when we see them. Most often we don’t hug each other for very long! In fact, handling is important to practice with birds to prepare them for veterinary exams or for you to examine them in case of injury.

Below the pink areas show where a cockatoo, as well as other parrot species, can most often be touched, scratched, or have their feathers preened without resulting in possible issues. The times not to touch a parrot anywhere on its body would be if the bird is not welcoming a touch or starts panting or shaking ecstatically. Some species may flatten their backs with their wings out from their body, and other parrot species may raise their tail and wink their cloaca at you. Familiarize yourself with each individual bird’s and each species’ general body language. 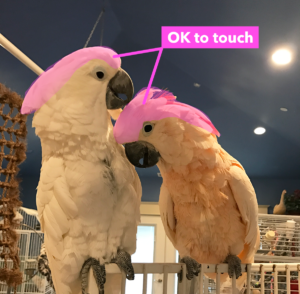 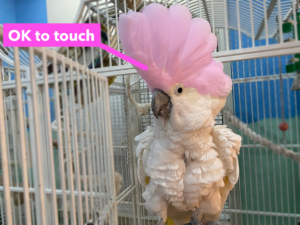 A favorite spot for touch enjoyed by most cockatoos can be under the crest, right on top of the head, where species such as umbrella and Moluccan cockatoos have a bald spot. For other species of parrot, I’ve found that their forehead or top of their head is a favorite spot. Occasionally short scritches under the wings may also be appreciated. Always observe body language to know if a parrot invites head scritches or body contact, since just like us they may not always be in the mood to be touched or pampered.

I would advise clients that if their bird is displaying mating behavior, they should avoid hugging or stroking them if at all possible. I give them a description of the kinds of body language they should look out for. Behaviors to look out for in cockatoos include crouching low, ecstatic shaking (sometimes mistaken for a seizure), and panting. With a macaw I would advise clients to look for cloaca winking, tail up, or crouched down with a flat back position. I tell my clients that if they see these the bird should be ignored or redirected to some other activity.

This video shows one of my birds doing ecstatic shaking:

Along with an explanation of mating behaviors, I also make sure to give a list of alternative behaviors my clients can do instead of touching and hugging that are reinforcing to them — things that both the human and bird feel good about, but aren’t likely to contribute to whatever behavior issue I was called to help with.

Instead of long hugs, stroking, or cuddling, which are human desires that a bird may allow us to do, we can teach our clients to build more satisfactory relationships by interacting with their birds in other ways. We can teach them to play games such as peek-a-boo, or the chase game where their hand follows the bird and they say “I’m gonna get you!” and when they do the bird gets something reinforcing to them. Or, show clients how to play catch by wadding up a large piece of paper very loosely and gently tossing it in the air. Remember to tell them that after a few times they should let the bird catch it and tear it apart, or toss it back.

Positive reinforcement training is fun as well! I have clients teach birds to target (touching beak or foot to an object such as hand or end of a chopstick, for example), or a turn-around, or how to wave by raising a foot up high. For more experienced or enthusiastic clients, I’ll teach them how to shape their birds to climb up a rope, pull a small bucket up to a perch, or some other multi-stage tricks. Or, I’ll teach useful husbandry skills such as going in the carrier on their own or holding a foot up for toenail filing in a fun, reinforcing way. And then, of course, there’s being plain ol’ silliness: laughing, singing, dancing, etc., with our feathered friends. All of these are easy to teach clients to do instead of petting their birds, and will enhance their relationship as well as go a long way toward preventing the inappropriate behaviors that excessive touching can cause.

Shauna is a retired veterinary assistant, a co-teacher with Susan Friedman for LLA (Living and Learning with Animals) and a 20-year long-distance volunteer at the Gabriel Foundation doing behavior and nutrition consults. She is currently a member of IAABC, IAATE, ABMA and AAV.