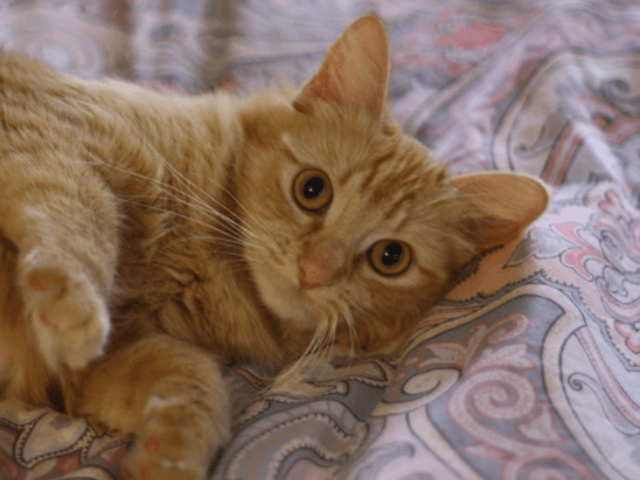 In July 2017, the Pet Retention Program at Contra Costa Animal Services (CCAS) got a request for the return of a young tabby cat adopted from the shelter a few months prior. When Stefani Buzzard, the pet retention coordinator at the time, responded with a request for more information about the situation, the reply began: “We are really in love with Mango (aka Buttercup at the shelter) and we’d actually really like to keep her….”

As it turned out, Mango had been having a problem with intermittent urination outside of the litter boxes, and a vet visit had ruled out common medical causes. There was tension between Mango and the resident cat, Nohea, and the adopters had tried multiple changes to solve the problem to no avail. Seeing that the bond between adopter and cat was still seemingly intact, Stefani’s mind turned toward providing resources to help keep the cat in the home—sending links and information to address the issues, and praising the adopter for their willingness to work with challenging behaviors. She also mentioned that there was a program that could help them with funds, if finances were an issue.

A week later, another email:

Mango is such a sweet girl and very fun, but it is very stressful to clean up after her messes. She is peeing everywhere, and we don’t have a washer/dryer in our unit, so laundering everything every day is really difficult. We’ve already had to throw out our couch because she peed on it so often, and she woke up the children this morning by peeing on my daughter on her bed.  I really don’t think we can keep her if this continues. It seems to be behavioral, but I don’t know what else I can do. I’ve tried different litters, too. I don’t know where else I could place the litter boxes where they would not be in the way, since we have a small two-bedroom apartment. Mango does not want to be sequestered anymore and meows and scratches the door if we have her in the bedroom (with food and litter box). She wants the run of the apartment, and our other cat does, too. I don’t know how to keep them separated without them being upset.

Clearly, the situation was escalating: It seemed Mango was one step away from being back at the county shelter, now with a history that could make her less “adoptable.” Elimination outside of the litter box is not only one of the top behavioral reasons for surrender to shelters, but also—as one can imagine—a significant deterrent for new adopters, resulting in higher length of stay for the cats who are stigmatized for what is quite often a fixable problem.

Thanks to an innovative program run collaboratively by the municipal Contra Costa Animal Services (California) and the private nonprofit Tony La Russa’s Animal Rescue Foundation (ARF), pet owners who are residents of Contra Costa County and are struggling with their pets’ medical or behavior issues, or with housing, can get assistance to keep their animals in their homes. Developed to reduce the influx of animals into county shelters, this program provides practical and financial assistance for veterinary care, temporary boarding, fence repair, pet deposits, and yes, behavioral interventions. These resources are provided by ARF and CCAS, both drawing on donations and grants including the county’s Animal Benefit Fund. There is an application process and screening to ensure that the cases are within the limits of the program.[1]

ARF’s community programs coordinator, Laura Jean, reached out to Feline Minds Cat Behavior Consulting, a partnership Mikel M. Delgado and I formed in 2008, to see if we could help with Mango. It was their first time funding a cat behavior intervention, though they had previously used the funds for dog training help.

Both Mikel and I come from a shelter background—in fact we met and worked together at the San Francisco SPCA, where, among other duties, we staffed a cat behavior hotline. This service opened our eyes to just how necessary expert cat behavior help is for guardians. Like many behavior consultants, we like to give back to the community (and keep cats in homes!) so we offer discounted rates to rescues and municipal shelters. We were happy to take on the challenge of keeping Mango in her new home, and hopefully alleviate the obvious stress that the household was under.

While remote consultations supplemented by video footage and intensive interviewing can also be very successful, in this case we were fortunate to be able to pay a visit to Mango and her family. Home consultations can be especially effective when trying to solve cat behavior problems, for a variety of reasons. One of the main ones is that cats are much more likely to act like themselves in their own environments, so consultants are able to watch human-cat interactions, cat-cat interactions, and how the cat navigates their territory. Another is that, when onsite, we are often privy to details (smells, sounds, and views from windows, for instance) that the cat guardian would not think to, or could not easily, share. A less tangible benefit is the ease of building rapport when meeting with people in their environment, as opposed to a more sanitized experience in a clinic or over the phone.

Mikel scheduled the consult for a warm August day, in the city of El Cerrito, east of Berkeley. Our typical consultation takes between 90 minutes and two hours, and includes taking a history, getting a tour of the house, meeting the cats if they are so inclined, and demonstrating behavior modification techniques and training if the cats are willing. Much of our work involves analyzing patterns of behavior. In this case, Mikel was able to quickly observe that all out-of-box elimination was on elevated surfaces like a chair, the couch, and a bed—places with a view—and that the current litter box setup was not optimal for a multi-cat situation. Even though the client had three litter boxes for the two cats, the litter boxes were all smaller than is ideal, and were covered. As is often the case when cracking cases of elimination issues in cats, setups seen as ideal to guardians can be less so for cats: One litter box was aesthetically concealed in a wood cabinet, no doubt a nice feature for humans, and quite common, but problematic for cats because it lends itself to feeling cornered.

Based on the presentation of the elimination and history of the cats’ relationships with each other, it seemed likely that Nohea had either pounced on Mango in the box or given Mango reason to think she may! Optimizing the litter box setup would be one large piece of the puzzle, but there were clearly some other necessary changes. Mango was uncomfortable with Nohea’s playful pouncing and chasing, so addressing the cats’ relationship with each other would be crucial. Mikel’s plan included separating the food bowls, adding vertical space to the small apartment so that the two cats had more territory to share, as well as increased playtime (Nohea is less likely to pounce on Mango if she is tired!), and enrichment such as food puzzles. She also shared product recommendations for enzyme cleaners, to eliminate the cat urine odor for the cats’ more sensitive noses.

Follow-up is an important part of behavior consulting; it allows us to tweak plans based on a cat’s responses before the client is frustrated and encourages continued work on problematic behavior. Feline Minds includes some follow-up for all of our consultations.  In Mango’s case, the responses were happy ones:

Thanks for checking in! Mango has been really good with her litter box, and she and Nohea seem to be getting along really well. They seem to be getting more and more comfortable with each other, and will lay (sic) fairly close together (about two feet apart) and will sniff each other without any hissing. Your suggestions have really been helping! We’re still keeping the kids’ bedroom closed most of the time, but we’ll occasionally leave it open when the kids are in there. So far, she hasn’t peed on the bed again since the last time I wrote.

Resources spent to keep a companion animal in a home may seem beyond reach for some shelters, but considering the financial (and other) burden of caring for one in a shelter, it may be money well spent, not to mention the satisfaction of preserving the pet-human bond, and saving cats and dogs from the stress of being in a shelter environment.  From a fundraising perspective, this is a worthy cause that seems to have great appeal to donors. Steve Burdo, community and media relations manager at CCAS, shares that between 2015 and 2016—the first year of the CCAS Pet Retention Program—CCAS has cut the number of animals coming in through the owner surrender pipeline by more than one-third (2,428 in 2015 to 1,547 in 2016) and adds, “The Contra Costa Animal Services/ARF Pet Retention Program has been a shining success that has allowed hundreds of Contra Costa County animals to remain in their loving homes through providing resources, intervention, and compassion.” 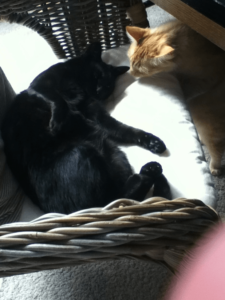 A quick Google search leads to many other shelters’ pet retention programs, indicating that this idea is taking hold nationwide. As more people (and shelters) come to realize that cats are trainable and their behavior problems often treatable, the role of feline behavior consultants in these interventions is sure to grow. While not all cases will resolve as successfully as Mango’s, the support and education provided will serve to empower guardians, and to build positive, ongoing relationships with the community at large. As Laura Jean, who assists with admissions at public shelters as well as interfacing with Safety Net fund recipients directly, says, “The number of cats surrendered for behavior issues – especially litterbox-related—is astounding. We know that more cats than dogs are euthanized in shelters every year—why not invest more in keeping as many cats out as possible?”

Why not, indeed! In Mango’s case, our latest update (March 2018) makes it all feel worthwhile:

Things are going great with the kitties! Mango and Nohea have become really good buddies, and they now sometimes even curl up and sleep together! Thanks again for your amazing help!