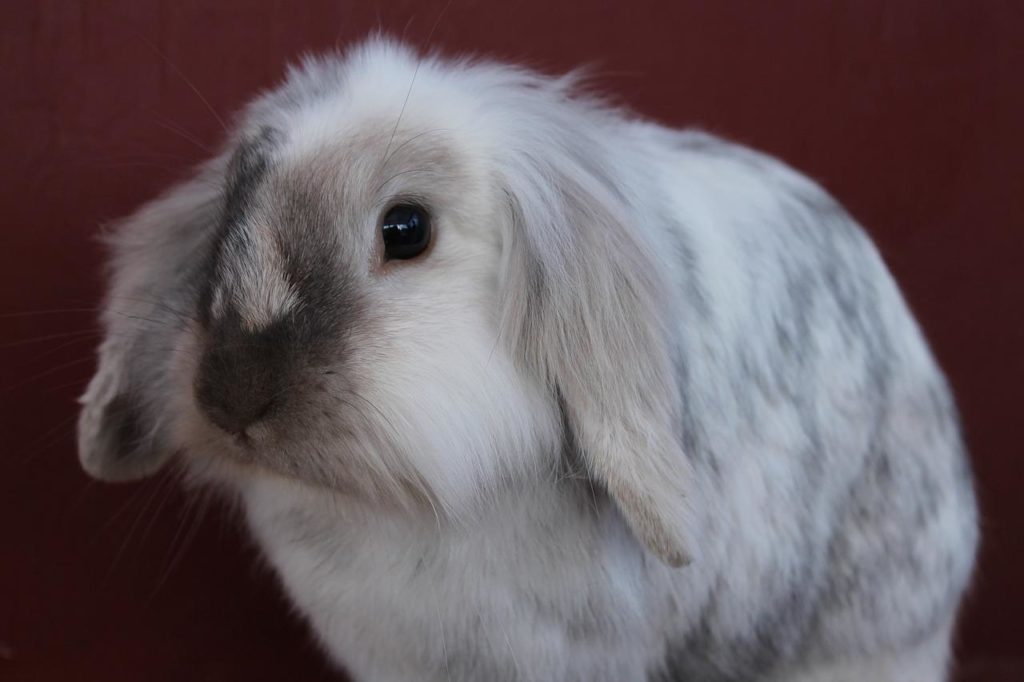 The domestic rabbit is a popular choice among keepers of small and exotic companion animals. Their appeal to the pet-owning public includes the potential to be spayed or neutered and litterbox trained, and that they stay a relatively small size yet possess big personalities. Domestic rabbits can be found in homes across the globe but they are most common in Western countries like the United States and the United Kingdom.

With a rise in the popularity of rabbits as pets comes a rise in the misunderstanding and misinterpretation of rabbit behavior, health, and general husbandry. This article discusses some of the key things we know about domestic rabbit behavior and husbandry, and areas that may require further investigation and research.

Rabbits should be housed at least in pairs. Like their wild European rabbit counterparts, the domestic rabbit is a territorial animal that also creates strong social bonds. Human companionship only partially fulfills a rabbit’s need for social interaction, and the addition of a companion rabbit is essential to the overall mental health and welfare of this species.

Introducing unfamiliar rabbits should be a slow, gradual process. Rabbits that will be housed together will ideally meet when they are young, at between 6 and 12 weeks of age. Adult rabbits may take a longer time to bond, and previous interaction history—or lack thereof—should be taken into consideration before the bonding process begins. Older rabbits that have lived their lives in isolation may not ever completely bond with another rabbit.

To begin the bonding process, rabbit enclosures should be placed relatively near to one another so that the rabbits may see, smell, and communicate with each other without the risk of injury. After an acclimation period with enclosures set up in this manner, supervised interactions can be arranged by the owner in a neutral space away from the original resident rabbit’s regular exercise area. Rabbits can be trained to wear a harness before starting bonding sessions so that they may be pulled apart safely and easily if a fight occurs. If rabbits are not harness-trained, towels or heavy gloves can be used to separate them. Sessions should be kept short, only minutes at a time to start, so that they can end on a positive note.

As long as these supervised interactions remain positive, owners can begin to increase the amount of time the rabbits are out together, and eventually can begin the process in the rabbit’s regular exercise area.

As with every topic, a quick Internet search is the fastest way to learn what folk wisdom has to say about introducing new rabbits. There is no shortage of content on this subject, and it is often the opinion in these articles that a current resident rabbit should be allowed to meet a potential companion, or two, or three, before the new rabbit is brought home. Whichever candidate “hits it off” best with the current resident rabbit during this meet-and-greet should be the top pick as new addition to the family. Common sense seems to support the claim that there is some truth to this opinion: If two rabbits meet for the first time and an all-out brawl ensues, it may not be a good idea to bring that other rabbit home in hopes they might get along better there. However, despite many shelters and rabbit rescue organizations supporting this belief, there has been no real research to back it up. Is it really wise to introduce two members of a territorial, environmentally sensitive species on unfamiliar grounds? Could it be setting up potential companion rabbits for rejection? And if by chance two rabbits seem to hit it off during a meet-and-greet, does this really reduce the chances that they won’t fight within the home? Further investigation and research into this subject are required to know for sure.

Rabbits are a prey species, and while the domestic rabbit may be taught to tolerate or maybe even enjoy being picked up and held, this does not occur in nature unless they are captured by a predator. Thus it can be extremely stressful for a rabbit that is not accustomed to being handled regularly to be picked up or restrained. Another concern is that the bone structure of a rabbit’s spine is fragile. A frightened rabbit can potentially injure herself if she begins to struggle during handling. To avoid unnecessary injury and stress, it is essential that rabbit owners and those who may handle rabbits regularly be well versed in proper handling techniques.

The best way to move a rabbit from one location to another is to carry them “football style.” Scoop the rabbit up in one arm with their head tucked under your elbow, your arm holding them close against your own body, and your hand supporting their hind end. From that position, you can lay your opposite hand over the top of the rabbit, even applying a gentle scruff if necessary. Just like a football! In this position, the rabbit feels secure and has minimal room to struggle.

The towel burrito is also an excellent way to examine a rabbit and perform any husbandry procedures the rabbit may require. Once the rabbit is wrapped in the blanket it is easy to examine her eyes, ears, nose, and mouth. To examine the rest of her body, the towel can be lifted up or unwrapped in the area that is being examined.

It is widely accepted that a rabbit should never be picked up by the ears.  Experienced rabbit handlers also know to avoid restraint by scruffing alone, as this could lead to spinal injury if the rabbit were to kick and thrash while restrained.

There are still methods of restraint that are outlined in many of these sources that are becoming more debatable in terms of welfare. One such method includes tonic immobility (TI), which involves placing the rabbit in dorsal recumbency, inducing a “trance-like” state. In fact, I learned this method of restraint myself in veterinary technician school almost nine years ago. I remember the professor instructing everyone to turn their rabbits in dorsal recumbency in order to trim their nails, and it was a method I employed numerous times thereafter for different husbandry or medical procedures.

Recent research suggests that TI may, in fact, elicit more stress than the restraint method is worth. The behavior the rabbit displays during TI, the “hypnotized” rabbit, is really a mechanism in defense. Essentially the rabbit is “playing dead” as she feels she has no other means of escape from a predator. It would seem that if this is the case, TI should not be employed to perform basic, routine procedures such as examination or nail trimming. The case may be made, however, that TI can be an acceptable means of restraint for more involved procedures to avoid more invasive techniques such as sedation in a veterinary or laboratory setting.

Location of the enclosure should be in an area to prevent extremes from temperatures. If kept outdoors the enclosure should provide an area of shade where the rabbit can rest. An absorbent substrate material—such as unscented wood shavings, shredded paper material, straw, or hay—should be used to line the bottom of the enclosure. If wire flooring is used in a rabbit’s enclosure, it is often suggested to add a board for the rabbit to lie on, to prevent foot sores caused by constant contact with the wire surface. Enclosures should be set up to protect their residents from predators whether indoors or outdoors.

Domestic rabbits can display a wide range of behaviors similar to those of their wild counterparts. Some of these behaviors include hopping, stretching, and rearing. Rabbit welfare guidelines emphasize the need for rabbits to perform these behaviors and have set suggested cage dimensions for those rabbits kept or raised for meat or in a laboratory. Unfortunately, one survey, Mullen and Mane (2006), found that the average size enclosure for companion rabbits is actually smaller than the legal requirements for meat or lab rabbits.

One study published in the Journal of Veterinary Behavior found that behavior patterns varied depending on the size of a rabbit’s enclosure. Those rabbits that were housed in smaller enclosures experienced a rebound effect where natural behavioral patterns, which may be internally driven, increased in duration or frequency when transferred to a larger enclosure. Those behavioral patterns involved an increase in activity, including hopping and rear alerts. This study may be an indicator that companion rabbits require larger areas of housing than those that have been historically provided in order to meet their basic welfare needs.

The selection of commercial rabbit diets readily available in pet stores is vast. Diet formulas can range from an extruded feed, to muesli formula, to primarily hay-based. As a monogastric, hind-gut fermenting herbivore, a rabbit should be fed a diet that contains large amounts of fiber. A high fiber content helps to prevent health ailments—like maldigestion and malocclusion of the teeth—as well as stereotypic behaviors like inappropriate chewing as a result of decreased feeding time.

The fiber content of commercial rabbit diets is typically stated, if stated at all, as crude fiber. However, crude fiber only represents part of the fibrous components measured by total dietary fiber. According to the National Research Council’s Nutrient Requirements of Rabbits, the minimum crude fiber requirements for rabbits is 14 percent.

Unfortunately, these data of minimum crude fiber requirements are outdated (from 1977) and refer more specifically to farm, not pet, rabbits. At the time of one preliminary study, there had been no defined total dietary fiber requirements in rabbits.

Fiber content is highly variable among commercial diets. Since dietary label information is typically the only source of information available to pet rabbit owners and veterinarians, crude fiber can be misleading if thought to represent the actual fiber content of the diet. Further research into the dietary requirements of pet rabbits may help reveal more defined fiber requirements that can be more clearly stated on commercial packaging.

There is still much to be learned in the areas of pet rabbit husbandry, health, and their effects on behavior. With a rise in popularity of the domestic pet rabbit there is an important need to further investigate such subjects, and hopefully this article has sparked some thought and interest on these matters.