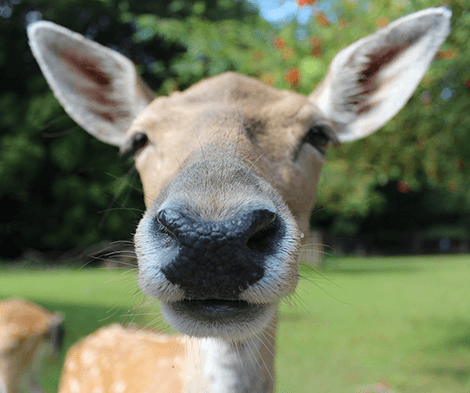 A Facebook group shared this video claiming the deer “intuitively” knew to keep still so that the man could rescue it.

Given that the vast majority of interactions between deer and humans involve hunting, somehow it doesn’t seem likely that a deer would understand that this particular knife-wielding guy wasn’t intent on causing it harm. Would Bambi have shown up at the hunter’s house for brunch? Unlikely.

What we’re really seeing here is a deer completely shutting down in response to prolonged fear. This deer has probably had a long struggle after being tangled. It will have been flooded with adrenaline, and highly stressed before it encounters the man. At 0:20, the deer appears to fall and crash into a tree, where it lies still as the man approaches it. So now the deer is exhausted, injured, and still tangled, as the man approaches and takes hold of its leg.

The deer is exhibiting an extreme form of freezing called tonic immobility, not patience. It’s a common response to trauma or threat in many animals (including humans) and has been documented in deer:

“In white-tailed deer fawns, the sudden approach of an unfamiliar person, with or without a dog, induced in some animals tonic immobility associated with a decrease in HR [heart rate] by up to 68%; the duration of bradycardia ranged from 5 seconds to about 2 minutes.”

Hunters know this behavior as “playing dead”—biologists give it the supremely badass name thanatosis—click on any hunting forum and you can read stories of deer appearing to miraculously reanimate after being shot. Sadly they’re not zombies or the cervine Second Coming; scientists think it happens as a way to deter predators.

And if you’re wondering whether playing dead is really an adaptive response to predation, this video of an antelope making a quick getaway should help convince you!

Tiro Miller, PhD, SBA, is the managing editor of this journal, IAABC advertising and promotions Chair, and volunteer dog trainer at San Francisco SPCA. He writes at Dogs+Ethics Blog, and less seriously at Occam’s Rover.