The Benefits of Teaching a Parrot Tricks 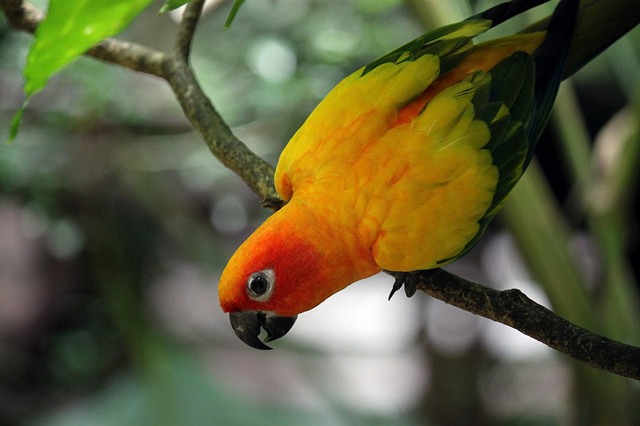 Living with an intelligent exotic animal like a parrot can be an absolute joy. It can also be quite challenging trying to meet the complex needs of these marvelous sentient beings. The most effective and humane, and least intrusive, way to interact with your bird is through operant conditioning and positive reinforcement, because it empowers your parrot, gives them choice or control, and helps establish and maintain a positive, trusting relationship. Here I will use the term teaching, instead of training, because these principles apply to all species, including humans. Since the behaviors are taught with your parrot’s voluntary participation, I use the word cue, instead of command.

Teaching tricks can help build a positive bond between the teacher and learner. It provides a fun source of enrichment. Sessions are short and should be ended when your parrot loses focus.

I’m an anthropologist and archaeologist who lives with five parrots. My first parrot, who came into my life while I was completing my PhD in archaeology at the University of Chicago, so intrigued me that I began studying the bond between people and their birds and discovered the interdisciplinary field of anthrozoology, which focuses on human-animal relationships (Anderson, 2003; 2014).

I began to study applied behavior analysis in 2010 when I completed Dr. Susan Friedman’s wonderful telecourse, Living and Learning with Animals (LLA) for animal professionals. I also audited LLA during Fall 2017. In addition, I have continued learning through completion of workshops with several animal professionals including Ken Ramirez at the Shedd Aquarium, Robin Shewokis (International Associate of Avian Trainers and Educators) and Sid Price of Avian Ambassadors, Dr. Susan Friedman and Steve Martin at Natural Encounters, Inc., Hillary Hankey of Avian Behavior International, and Lara Joseph of the Animal Behavior Center. Teaching my three Quaker and two Pionus parrots new behaviors is the best part of our day.

Begin with the ABCs

Understanding the ABCs of behavior analysis—antecedent, behavior, and consequence—is fundamental to understanding and changing behavior in parrots (Friedman, 2001). Identification of the antecedents to the target behavior helps us understand and predict the behavior and its consequence. Through thoughtful arrangement of the antecedent environment we can set our learners up for success and make it more likely that desired behaviors will occur. The consequences, which follow the target behavior, affect whether or not the behavior is likely to diminish, or be repeated, maintained, or strengthened in the future. Behaviors that are reinforced are likely to maintain and increase.

The establishment of successful voluntary husbandry behaviors is important for your parrot’s welfare, to make daily care less stressful, safer, and more fun. Behaviors such as stationing (remaining when cued) on a specific perch until released can make changing food and water dishes in your parrot’s cage less stressful for both of you. My arrangement of the antecedent environment consists of adding a perch to each of my birds’ cage doors, where my parrots now go automatically when they see me. Because they have a positive history of being reinforced for staying on the perch, they remain there, and there is no attempt to guard cage resources when I change their dishes, or add or remove objects from their cages. What was in the past often a struggle has become a positive experience for all of us.

Teaching your parrot tricks can also improve their welfare because it gives more opportunities for reinforcement and to build trust. Silly trick behaviors such as circling, waving, backing up, picking up an object, retrieving an object, flying to your hand, or even painting or playing basketball can be quite fun for both you and your bird, and provides mental stimulation and physical exercise. Also, because it gives more opportunities for reinforcement, it helps to build a strong and positive relationship with your bird.

According to the principle of contrafreeloading (Jensen, 1963), a learner would rather earn their reinforcement than receive it for “free.” Part of the daily diet can be reserved for training, which satisfies the birds’ desire to work for their food, and also helps keep your parrot at a healthy weight. To track weight, it is important to weigh your parrot regularly and keep a chart. Ask your avian veterinarian what a healthy weight range is for your individual parrot.

Teaching a new behavior is done through a process called shaping or “differential reinforcement of successive approximations” (Friedman, 2006). Any time you interact with your parrot, you are potentially shaping behavior, so it is important to be mindful of your interactions, by carefully observing their body language, to see how your actions affect your parrot. To begin, make a shaping plan that details the steps your parrot needs to accomplish before they get to the final behavior.

One recent behavior that two of my Quaker parrots have learned and enjoy is to “play basketball.” This is a behavior chain that builds on a series of behaviors that the birds already knew: following a target, picking up a ball, putting the ball in a receptacle, picking up the ball, moving it gradually increasing distances to a lower, then a higher, container. Below I give a sample shaping plan for each of the behaviors that will ultimately be chained together in a sequence to achieve the final behavior of placing the ball in the container of the basketball prop. Once the behaviors are fluent, then they can gradually be linked together by cueing for the initial behavior, then cuing for the next behavior, and so on, making reinforcement contingent on completion of the final behavior.

Shaping Plan 2: Picking up an object

Shaping Plan 3: Putting the object in a container

Shaping the behavior with Max, a Maximilian pionus parrot: successive approximations toward the hoop by placing it in my hand.

In this video I shape the behavior of putting the ball in my hand, which I gradually move toward the basketball prop. Once I get close to the prop I begin to raise my hand so that Max will raise the ball to the hoop. Max begins to lose focus near the end of this session, which I should have ended sooner. However, the next day she was back in the game, putting the basket through the hoop.

Max, a Maximilian Pionus parrot, places ball though the hoop of a basketball prop.

At this point, Max is putting the ball in the hoop when prompted (Video 2). In the future I will fade the prompt (my pointing finger) and add a cue such as the word “basket.” I shaped this new behavior with Max specifically for this article. Two of my Quaker parrots (Beaker and Ozzie) also will dunk baskets when prompted.

A cue, also known as a discriminative stimulus or SD,  may be added to signal a behavior by giving it when the behavior is occurring. The cue can then be added earlier and earlier until it is given before the behavior begins. Finally, only cued instances of the behavior are reinforced (Friedman, 2006).

Parrots are naturally neophobic, or fearful of new things, so it is important to sensitively introduce new objects gradually, at your parrot’s comfort level, through the process of desensitization and counterconditioning so that you don’t frighten your parrot.

The ball, to make it easy for your parrot to pick up, must have openings so that they can insert their beak. I use the plastic open “basket weave” style plastic balls with bells inside that are sold as cat toys. Watch that your bird does not try to break them open, however. My Pionus are quite capable of doing this so I don’t leave them unsupervised with the balls.

Basketball prop. Be certain to use one that is well made and sturdy so that it doesn’t fall over and startle your parrot when they attempt the basket. I use the one sold by Mango Pet Products. The small size works well for Quakers and Pionus parrots.

Target stick. You could use a chopstick, a formal target stick with built-in clicker sold by animal professionals such as Terry Ryan or Barbara Heidenreich, or simply your finger. I use the target behavior (pointing my finger) to teach the birds to put the ball in a receptacle and to move it from one place to another. The target behavior is the foundation to many other behaviors.

Patricia K. Anderson, PhD, CPBC, is an associate professor of Anthropology at Western Illinois University where she teaches anthropology, archaeology, and anthrozoology. Her research interests include ancient Maya civilization, the prehistory of North America, the human-avian bond, and bird behavior and modification using applied behavior analysis.

[1] Your reinforcer will vary depending on what your individual bird likes and will work for.