Panic and Pain as Complications of the Cat-Dog Relationship 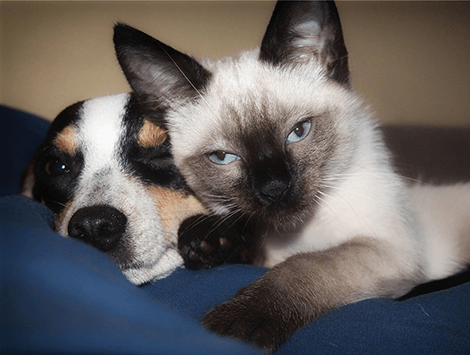 You have—or your client has—a dog who is completely non-reactive to the household cats; in fact, she may even appear to love them. She might engage in mutual grooming and cuddling, and not mind the occasional cat-slap when she tries to sniff a butt. Does this mean your dog is completely cat-safe? The short answer is no, never.

Of course, the same concerns arise with dogs and other dogs, and dogs and people. The dog-cat dynamic is of special concern though, for several reasons: Many cats are often quick to “correct” transgressions; cats are prey animals; dogs are predators; we leave them alone together; one is big and the other is little (or at least, one is bigger, more muscular, and has larger jaws).

When I was working in veterinary cardiology, one of our long-term patients arrived in critical condition after fighting with his housemate. He was a toy-sized, 15-year-old, scruffy-haired mixed breed dog, and his housemate was an 18-year-old female Siamese. They had lived together for 15 years with nothing more than an occasional grumpy word (from the cat) until the fight that landed the dog in the hospital. The incident involved them duking it out (arthritically, toothlessly, and with no demonstrable agility) on the couch one morning. They both ended up falling off the couch, with our patient cracking his pelvis and suffering a mild relapse in his congestive heart failure due to the stress and pain. The cat was okay but sore and was able to demonstrate a vigorous temper that belied her age and state. The client—a wonderful elderly lady with a puffy dome of bluish-white hair—said that there appeared to be no incitement to the fiercest, slowest battle either of them had faced in their 15 to 18 years. She was distraught—could her companions ever be trusted together again?

The short answer? No. In this case I have a strong suspicion that the most likely factor was the joint pain of these geriatric animals. One of them may have been jostled by the other, causing pain and a reaction. Whether it was the cat aggressing against the dog for causing her pain, or having a strong reaction to a low growl or gum display by the dog, one’s pain incited the other’s pain or panic, and they both threw down. (The other possibility is that one of them has a neurological issue and incited the fracas subsequent to a seizure or abnormal perception; that’s a subject for another article though.)

Regarding the vicious circle (no terrible pun intended!) of pain and aggression, my most illustrative story is from years ago involving a big orange tabby with a split lip.  There was a small but apparently very painful laceration from the bottom of the nasal septum through to the tip of the upper “lip” (right along the visible line between the two). After the cat came in on emergency, he was put in a cage. When one of the nursing staff when to retrieve him for an exam, he hissed and then everything went south. His hissing hurt his lip so badly that he reacted further by hissing, yowling, and causing himself increased bleeding and pain. He came the closest to the cartoon Tasmanian Devil in hurricane form than I’ve ever seen an animal before or since. He had to immediately be given strong sedation intramuscularly to prevent him from further injuring himself, as he was literally bouncing off the walls of the cage. Having the task of corralling him in one corner of that cage for sedation almost induced stress-related heart failure in me.

The mantra that all dogs can bite in the right circumstance applies to all animals, and it’s important to consider pain as a trigger. My late dog was a non-reactive love bundle.  Kittens could crawl on him and pounce on his nose, pups could gnaw his tail, and a few kids got in some cheek squeezes before I could intervene. My cat—also old, arthritic, and grumpy—gave him a few “corrective” slaps on his long schnozz with no reaction but the appearance of hurt feelings on his part. But what if a claw had caught his eye, or if he’d been previously injured and the cat caused further pain? You can bet my cat wouldn’t have stood down, and a brawl might have ensued with the geriatric cat perhaps coming out the worse, as my dog wasn’t toy-sized and toothless.

Besides a physical condition that can increase risk of aggression, another trigger of note is panic. This is illustrated by a more tragic story from a client. She had a 5-year-old Shepherd-type mix and two 12-year-old cats. They’d all lived together for four years with no issues besides the occasional cat-slap to a nose, which the dog took as the cease-and-desist order it was meant to be. One cat tended to sleep in the linen closet that had a bi-fold wood door. One day this client came home from work to find the dog trapped in that closet with her dead cat.  The linens were all over, the dog had peed, the inside of the door was covered in gouge (dog claw) marks, and the cat was dead with a few puncture wounds typical of canine teeth. No mauling.

The scene was typical of a severe episode of anxiety on the part of the dog, with the unusual additional circumstance because of the co-trapped cat. Since there had been years of household peace with the three animals left alone together for extended periods, it is extremely likely this was the inciting incident. What happened? The dog freaked out and the cat reacted aggressively? The dog freaked out and the cat jumped down to try to get away, only to find she was trapped and the dog was out of control with panic?

While this particular situation was by no means predictable, the take-away from all of these incidents is that potential pain and situations causing panic should be taken into account when thinking of dog-cat management. Remember, cats (who are quite dear to my heart!) tend to skip any warning steps and move right into the claws-out phase. Have a dog who’s recently broken a leg/tail/rib, or a cat who’s just had surgery? Keep them apart no matter how long they’ve been BFFs.  Keep animals with chronic pain conditions separated when you aren’t around, especially if they have any history of reactivity. Have a dog with noise phobia, and you know there may be a thunderstorm while you’re gone?  Separate them. (I would also separate when there is more than one dog in the house, even if they’re all BFFs, but that’s also for another article.)

I would proclaim to all and sundry that my late dog—who was almost literally a marshmallow—to be cat-safe. But he was a dog, and my cat was a cat, and to think that two animals (of any species) can’t have a conflict would be incredibly naïve. Factor in the big-versus-little, and the predator-versus-prey dynamic when considering your management strategy, with special attention given to situations that can alter the mental or physical state of your companion animals. Whether they have peaceful, mutual tolerance or are supreme ultimate cuddle friends, thoughtful management is always needed.

[ngg_images source=”galleries” container_ids=”3″ display_type=”photocrati-nextgen_basic_slideshow” gallery_width=”600″ gallery_height=”400″ cycle_effect=”fade” cycle_interval=”10″ show_thumbnail_link=”0″ thumbnail_link_text=”[Show thumbnails]” order_by=”sortorder” order_direction=”ASC” returns=”included” maximum_entity_count=”500″]Jess has spent most of her career in veterinary technology working in critical care and cardiology. She has been published in the APDT’s Chronicle of the Dog and in the peer-reviewed journal Veterinary Technician and is an accredited lecturer in her field.