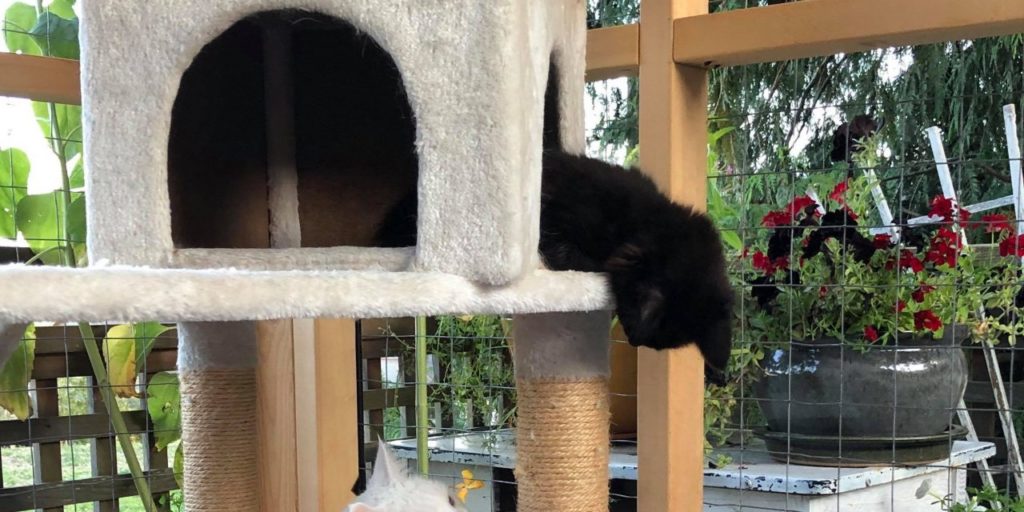 Recent research (Chalkowski et. al 2019) into whether outdoor access was a risk factor in the spread of 19 different pathogens, some of which transmit to humans and wildlife as well as to other cats, revealed that cats with outdoor access were 2.77 times more likely to be infected than indoor-only cats. For example, Toxoplasma gondii is a parasite spread primarily by cats. It can be transmitted to humans, and has been linked to depression, seizures, and schizophrenia in humans. Rabies, cat scratch fever, feline leukemia, and feline immunodeficiency virus can be transmitted between cats. Vaccinated cats are at lower risk, but even vaccinations do not eliminate the risk. Outdoor-access cats that live in countries at higher latitudes are more likely to bring home bacteria, because the wildlife in those areas have higher infection rates.

Kayleigh Chalkowski, lead author of a large study examining outdoor access as a risk factor for infections and disease in domestic felines, noted, “Basically, no matter where you are in the world, keeping your cat indoors is a great way to keep them healthy from infectious diseases.” The researchers followed cats over two dozen rural residences for several years and found the leading causes of death of cats who spent time outdoors were other cats and disease.

Other researchers used a sophisticated activity tracking device to capture the habits of 42 owned and stray cats in Central Illinois and found the owned cats ranged a lot further than their owners thought (Horn et. al 2011). Owned cats ranged over about 4.9 acres while the other cats had larger ranges and one cat had a range of 547 acres!

In Baltimore, a study revealed that an average of 2721 dead cats per year were removed from the streets over a three-year period and researchers estimated that more than 5000 free roaming cats are killed by automobiles per year in Baltimore (Childs & Ross, 1986).

A study over 11 years, conducted by the Wildlife Center of Virginia (McCruer et. al 2016), involved 21,000 patient records and revealed that 2,970 patients from 83 different species of wildlife were admitted due to confirmed attacks by cats (where the attack was witnessed). The most common victims were mourning doves, blue jays, robins, and cardinals. Most of the bird victims were adults, followed by juveniles and then nestlings. Other victim species included gray squirrels, chipmunks, cottontail rabbits, and southern flying squirrels. Juvenile mammals were attacked most frequently, then babies, then adults. Of all small mammals admitted due to cat attacks, more than 70% died or had to be euthanized, while 81% of birds either died or had to be euthanized. The study authors noted that, for the birds and small animals that do not receive help after a cat attack, the mortality rate is close to 100%.

Catios: Bringing the outdoors in

For all these reasons, many cat owners recognize the benefit of adding an outdoor enclosure to their house to accommodate their cats. “Catios” (outdoor cat enclosures or cat patios) have become increasingly popular with the owners of domestic cats over the years for good reason. Catios keep cats safe from vehicle accidents, predators, disease, and parasites. They also keep small wildlife safe from cats.

Pre-made catios can easily be purchased and installed, or they can be made from scratch. There is a wide range of styles and sizes available, and catio plans are easily available on the internet. 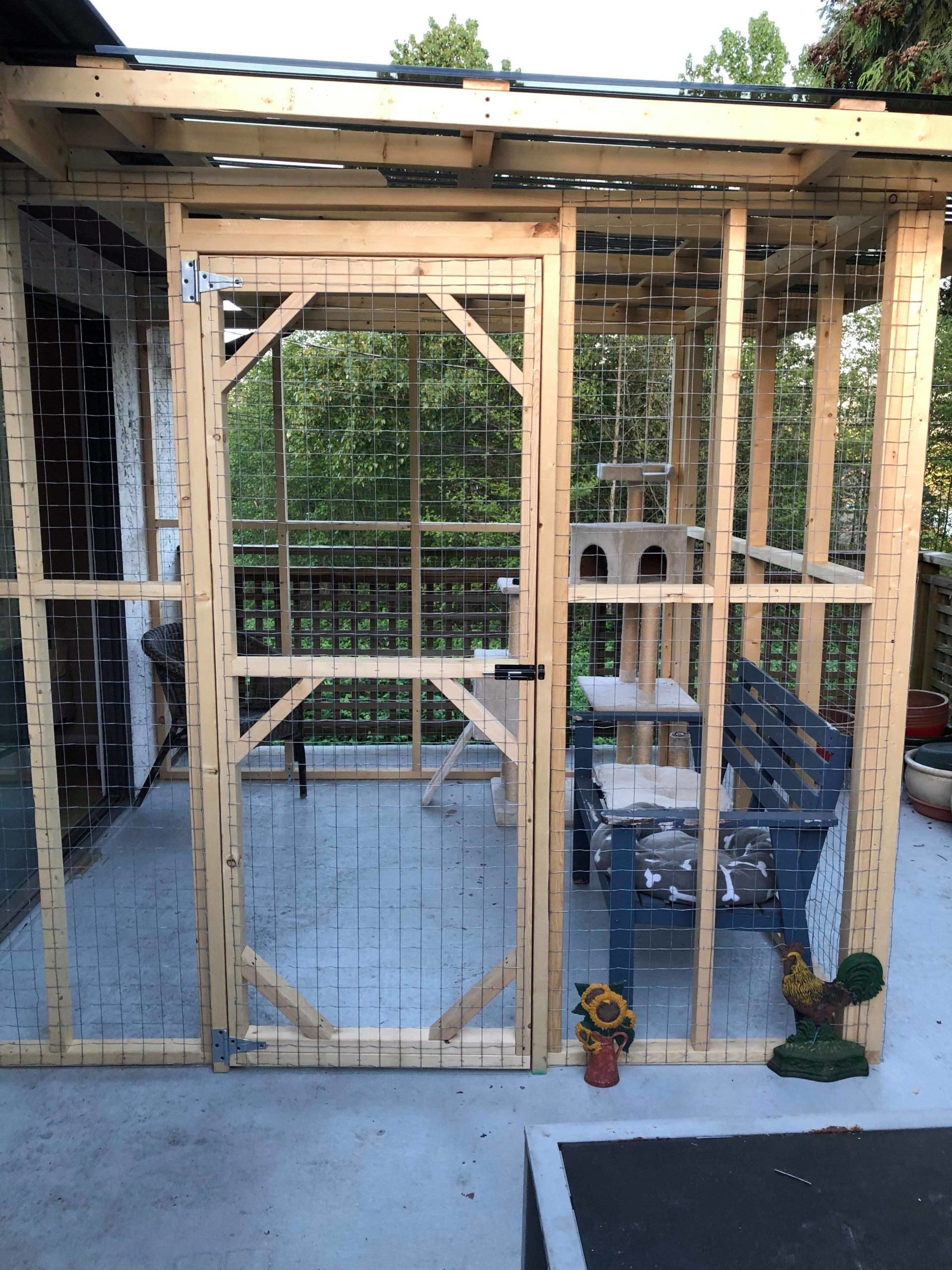 The catio should be big enough that the cat or cats can express a range of behaviors, with opportunities to hide, observe their surroundings, rest, explore and play. There should be adequate space between the litter trays, food dishes, and sleeping area, as well as space for cats to be away from one another if the catio houses more than one cat.

Cats love to climb, so shelves, walkways, ropes, and hiding boxes placed at various heights will provide cats with an enriched environment. Cat trees (either commercially made or homemade) are also popular. Cats especially enjoy spaces where they can see out and observe, so resting places with a view are better than those that might just fill a corner. Window perches are easy to install and can be moved easily. Some perches come with removable covers, and there are versions that are heated! Cats who may not otherwise get along often co-exist peacefully if they can choose resting spots and window perches of different heights. 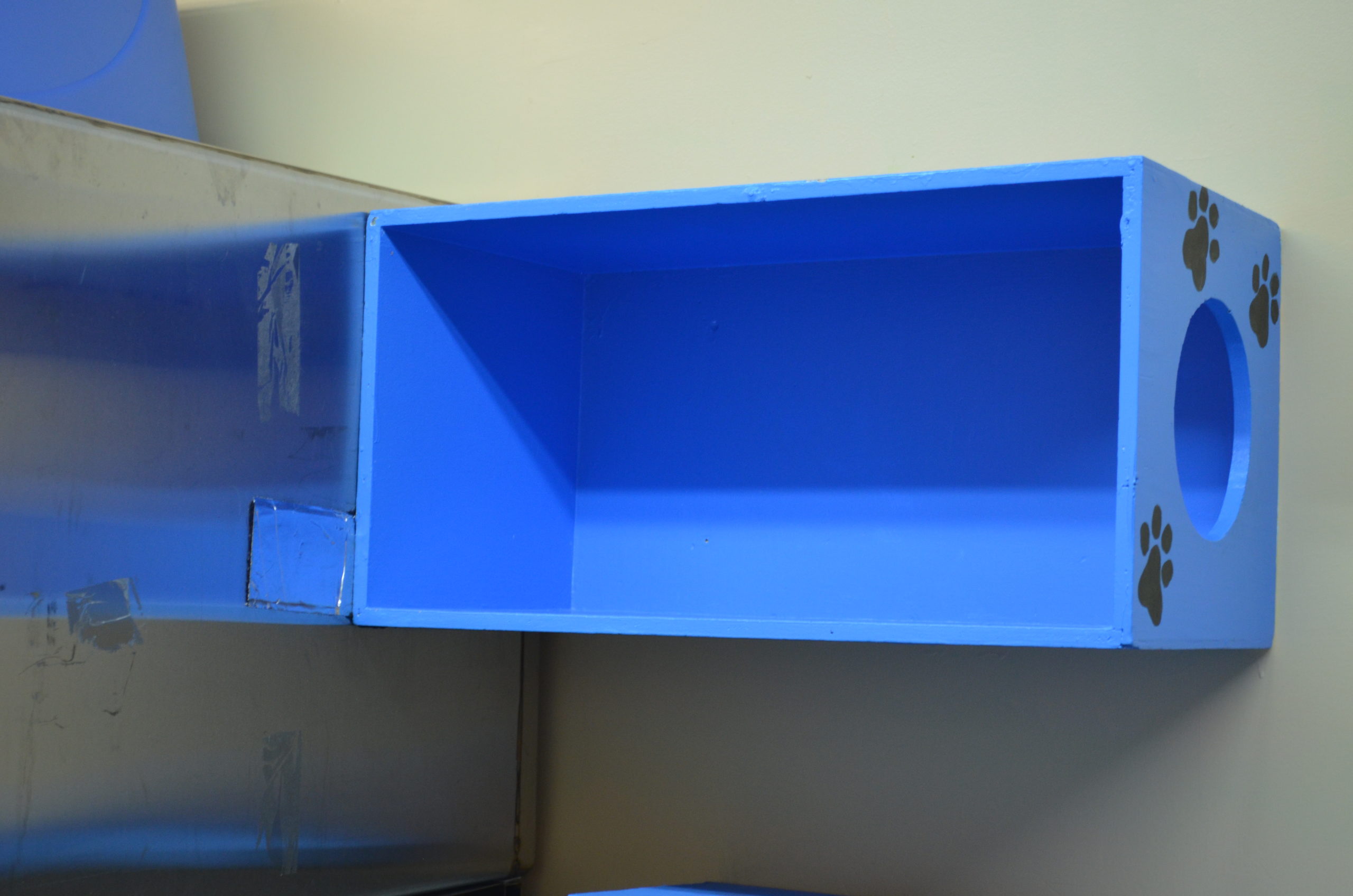 Raised and partly enclosed structures provide space for cats to hide and observe their surroundings. Partly enclosed spaces also let a cat get out of sight of other cats. Resting spots are important to cats, and these spots should have something comfortable for them to relax on. This will avoid them using their litter boxes as resting spots too.

Other features cats appreciate are hammocks and tunnels. Hammocks placed at varying heights allow cats to rest near each other but with enough vertical space that both cats are comfortable. Tunnels are fun for cats and can be a good hiding space for a shy cat. The best tunnels have holes in the side to allow cats to escape if they need to.  Resting spaces, tunnels, toys, and food should also be easily accessible, especially if there is more than one cat. Cats that are sharing a catio should be observed to ensure that there is no aggression between the cats, that no one is hiding all the time, and that each cat is eating a healthy amount. 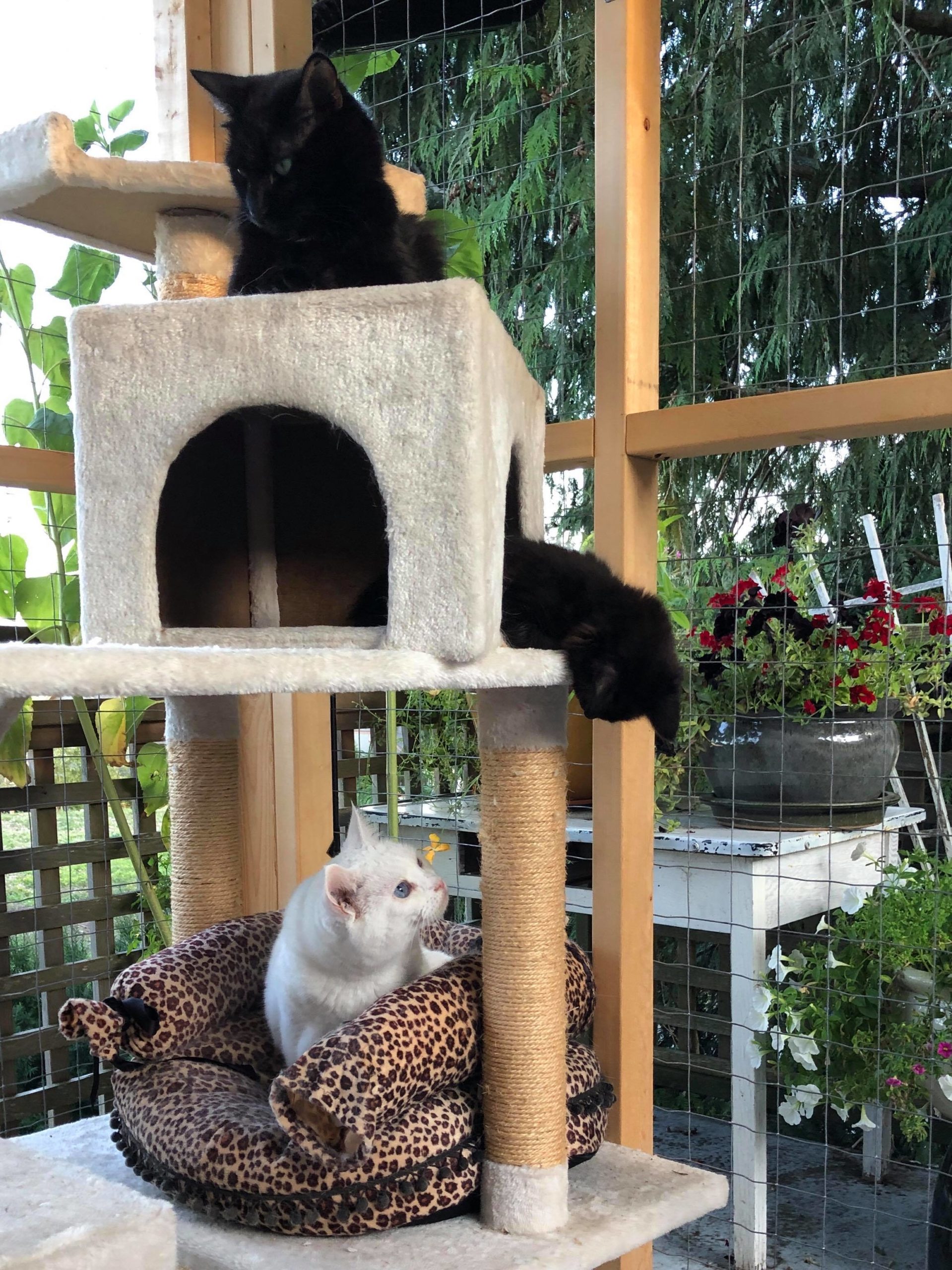 Walkways high up are a good feature for both houses and catios. Placing stairs up so the cat can access the walkway provides more vertical space for the cat. These walkways can look very attractive and fit in as part of the house décor. Walkways should have at least two ways for cats to access them, so a cat doesn’t get trapped by another cat.

Ensure that there is easy access to litter boxes. A variety of litters may be necessary if there are several cats sharing the space. Some experts recommend providing one litter box for each cat, plus one extra.

For cats that are used to having access to the outdoors, the transition to indoor living can be made attractive by making sure the indoor environment is enriched (Jongman 2007). If a cat has been used to using a tree trunk as a scratching post, using a log placed upright on a stand (or vertically for cats that prefer to scratch on vertical surfaces) can be a good substitute for a tree trunk. Some cats like carpeting, and others like carpet backing to scratch on. To train the cat to use the post, dangle a toy from the top of it so they learn about the texture of the post when they play with the toy. Rubbing catnip into the post is another way to encourage the cat to use the post.

A variety of toys will help cats enjoy their indoor living space. Cats generally like to bat small toys around and pounce on pretend prey. The owner can encourage play by using a toy attached to a flexible rod and dangling and moving it so the cat can chase the toy. Interactive food-dispensing toys in particular can keep cats from being bored. Another feature cats like is kitty grass to chew on. Pots are available from pet supply stores. Cats also enjoy new things, so rotating toys and adding novel items to the catio, like branches and open paper bags or boxes, will keep cats interested.

Behaviors to look out for

If a cat is showing behaviors like chewing, kneading and suckling, they could be feeling stressed. Identify and eliminate the stressor. I’ve found that products like Feliway (a product that mimics the messages that cats and other animals release into the air in the form of pheromones) also seem to help cats relax.

Many cats respond well to clicker and other reward-based training. Cats find play and social interaction very rewarding. Teaching cats fun things like agility (cat agility equipment is easy to make) or simply spending time playing with the cat keeps them from getting bored.

Overall, catios continue to gain popularity because they keep cats safe from disease, predators, traffic, and other cats, and they keep wildlife safe from cats!

Chalkowski, K. et. al (2019) Who let the cats out? A global meta-analysis on risk of parasitic infection in indoor versus outdoor domestic cats. Biology Letters 15:4

Jane Bowers is a behavior consultant and trainer who is certified in and enjoys working with both cats and dogs. Jane also does missing pet recovery with her two cat-friendly search dogs.