Lives of Streeties: A study on the activity budget of free-ranging dogs 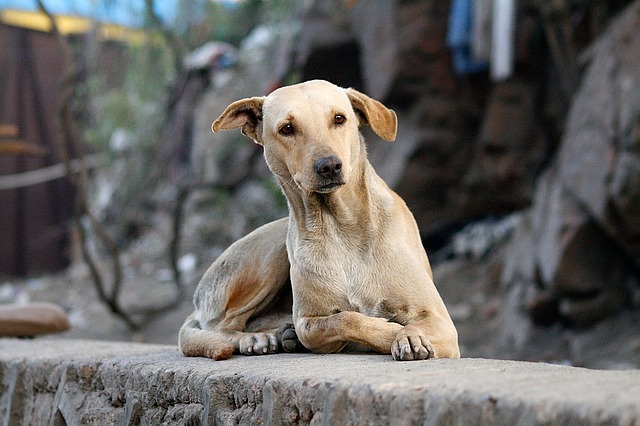 I spent most of 2015 flying back and forth from India to the US (that’s more than a 24hr long flight most times and once my layover alone was 22 hrs!). I was flying to the US to attend the year-long education on dog behaviour and canine care by Turid Rugaas in Asheville, North Carolina. Turid Rugaas is a canine behaviour expert and dog trainer from Norway, who is the author of the bestseller, “On Talking Terms with Dogs” and is credited with coining the term “Calming Signals”, to describe several signals dogs use as part of their communication with each other and with us. As part of this education, we were all required to do a project. Lives of Streeties was my project.

The whole thing started when a question was raised in class: “How much physical exercise versus mental stimulation do dogs need?” We figured that studying free-ranging animals in their natural habitat would yield answers. After all, animals in the wild do not need to be told what the optimal exercise is for them. They just know. But observing wild dogs (Cuon alpinus and Lycaon pictus) would not answer the question for our domestic dogs (Canis lupus familiaris). That’s when I realized that studying the street dogs of urban India would be a close approximation to studying free-ranging dogs in an urban habitat (dense and busy environment).

The first version of my study involved a failed attempt at trying to trail a street dog for 24 hours. Street dogs are notoriously good at shaking off a tail! In the second version of my study, I picked a time slice out of a day and recorded the activities of several dogs I saw during that time slice. I then averaged my recordings over several observation sessions.

Each day I would set out at an hour mark and walk for 45 minutes, recording all the dogs I saw along the way. Of course, given my close-range camera, I had to get fairly close to the dogs, causing them to alter their behaviour. So, I was careful to record the activity they were engaged in before I interfered.

At first glance, the activity budget looks a little like this: Sleeping and sleeping-curled-up are by far the most frequent activities. Resting, foraging, and standing are the next most prominent activities. Walking and trotting come next. And of course, there is a host of other activities that can be observed in much lower frequency, such as barking, grooming, begging, stretching, scratching, playing, pooping, peeing, rolling, and getting petted by people. 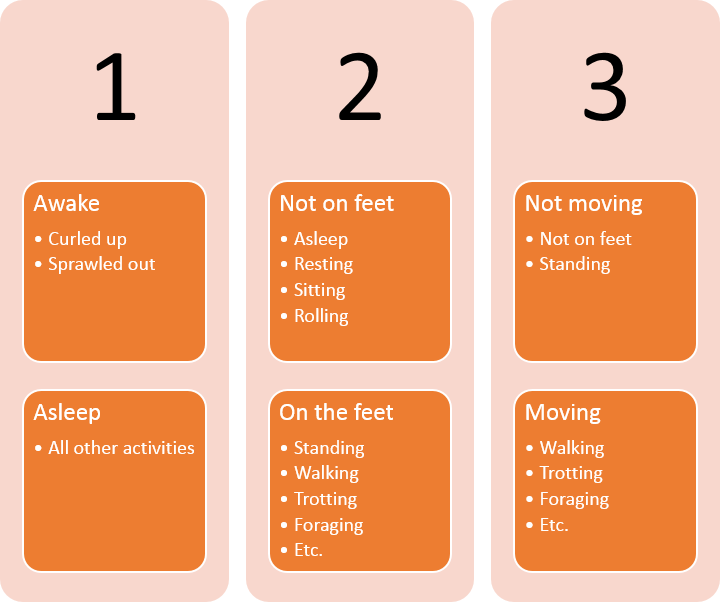 The next level of analysis of the data involved arranging all these activities into basic divisions, which is called bucketing, and then creating graphs of the activities within each of the buckets. The three pairs of categories I used for my buckets were:

In the first graph, you will notice that one single activity predominates the daily activity chart – snoozing! It’s a staggering 40 percent of the activity profile of dogs. The second graph is more pronounced, with close to 60 percent of the profile representing dogs not on their feet or inactive dogs. But it’s the final graph that came as a shocker to me. It revealed that less than quarter of the activity profile actually involved movement of some sort. Bear in mind that this movement includes walking, trotting, foraging, and a host of other activities like begging, pooping, peeing, being petted, and rolling.

As a side note, another independent study conducted by a research institute in Kolkota, India, reveals the exact same numbers when it comes to the percentage of inactive dogs. 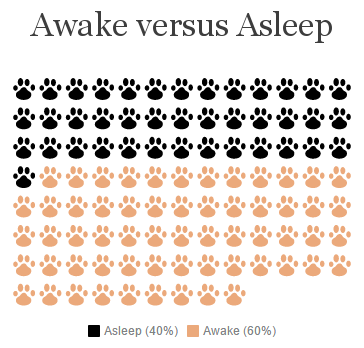 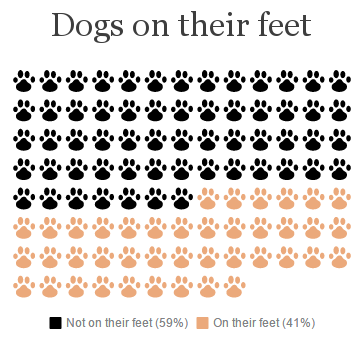 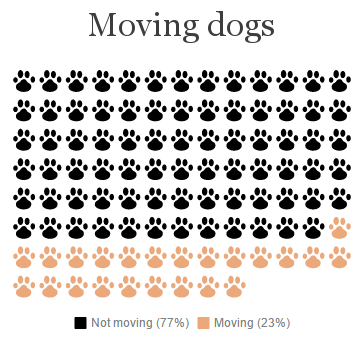 The big takeaway for me is that dogs chose not to be very active. They seem to need far less movement than I had imagined. When we think of street dogs, we conjure up images of them leading highly active lives involving lots of car chasing, playing, fighting, and generally strutting around. On the contrary, they seemed to prefer one activity over all else – sleeping.

I have been trying to determine why the street dogs sleep so much.  One possible explanation could be that they are trying to conserve energy to expend when they are awake. While this might be true, I am not sure they are expending more energy than our pet dogs. When awake, their activities are not high intensity chasing activities. Instead, they seem to mostly be lazily walking around, looking for things to do or going from one familiar feeding spot to the next (most of the street dogs I studied seemed to have found human “friends” who fed them outside their homes or shops).

Another consideration would be stress. Again, on this front, I found the dogs that I studied to not seem stressed at all. They showed no signs of elevated stress levels in their body language. When approached, all of them were relaxed, cautiously curious (like most street dogs) and very friendly once they realized I was no threat. When awake, they seemed to spend most of their time perched on an elevated surface if they could find one, and just watching the world go by.

I tend towards believing that this is just the way dogs are. We were taught in class that dogs needed a lot of sleep and very relaxed walks that stimulate their brains more than a focus on providing intense exercise. For me this was a paradigm shift, so the results of this study came as a bit of a shocker. I have started trying this relaxed approach with my dogs and with my clients’ dogs. We bring down the “physical exercise” component of the walks, slow walks down to as slow as possible, focusing a lot on aimless meandering that involves a lot of sniffing. We also have cut out all intensely active games like fetch, running, and Frisbee. This approach, combined with other lifestyle changes, seems to be calming dogs down faster than I thought it would. We manage the weight of all these dogs with wholesome fresh food, carefully designed for weight loss. It seems to be working well for us.

The next set of graphs tries to examine how these activities change across the day because, as one might imagine, the activity levels certainly do not stay constant through the day.

The first graph looks at how much dogs sleep during the 24 hours of a day. This graph does bounce about a bit during the daytime. But after nightfall, there was a clear skew towards awake dogs.

A very similar skew is noticeable when looking at the number of dogs on their feet. This data is more erratic, though, and will perhaps reveal clearer patterns when there is more data.

When observing moving dogs, the trend is far more acute. Notice the pronounced lack of activity during the day and how that balance changes during the night and early hours of the morning.

There are missing hours in these graphs due to heavy unseasonal rains that skewed the data. They will be filled in this winter and the graphs will be updated.

The marked difference in activity profiles during the day and night could have several explanations. It could mean dogs prefer the dark, or lower temperatures, or lower human and vehicular traffic. I suspect that a combination of these factors is at play.

This study posed a lot of challenges for me. The lack of better equipment that would have allowed me to stay father away from the dogs did interfere with the study. Night-time data collection was hard due to the limitations of my equipment and the safety concerns for women in my city.

This study is promising enough for me to continue it at least until I double the amount of data and fill in the gaps in the graph. While the graphs here are very telling regarding the level of physical activity a dog is involved in, it does not say much about the extent of mental stimulation a street dog gets. Mental stimulation is hard to define, observe, and quantify and has hence been left out of this particular study, but seems like an interesting area to explore in the future.

The distinctive patterns this study exposes tell me that this is definitely a viable way to study a lot more about our dogs and their “natural” behaviour. The access I have to these free-ranging dogs gives me hope that this is the first of many more studies of this nature and I eagerly look forward to collaborations with canine behaviour enthusiasts from around the world in developing several more studies to expand our knowledge.

Sindhoor is a canine behaviour consultant. She works in Bangalore, India and provides consultation for guardians of companion dogs and conducts courses for aspiring professionals. She completed her education with Turid Rugaas, is a full member of Pet Dog Trainers of Europe (PDTE), editor of the PDTE Newsletter, affiliate of International School of Canine Psychology and Behaviour (ISCP) and a member of Pet Professional Guild (PPG).  She is the founder of Bangalore Hundeskole and Bangalore Hundeskole Academy.