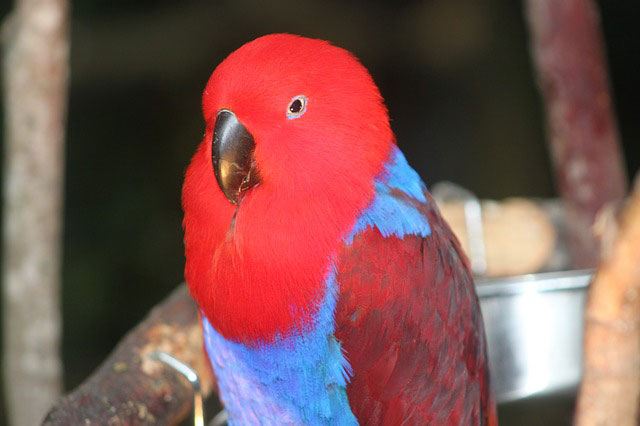 Kokoda is a 16-month-old female Eclectus Parrot. She was purchased from an Eclectus Specialist breeder in New South Wales and sent to me in Western Australia at around 14 weeks of age, after she was fully weaned and fledged. Kokoda is very cheeky, a total clown who makes me laugh on a daily basis. She is certainly her ‘own’ bird, independent, happy to play on her own, not a particularly cuddly parrot—although she is coming around to head scratches now—but also very inquisitive, often following me around just to get involved. She is very smart, she already has a large repertoire of words, phrases and sounds that she regularly uses to communicate. I grew up with Sulphur Crested Cockatoos and Budgerigars, and in my mid-teens I had a Ringneck Parrot, but Kokoda is the first parrot I have had since I began my career in training and behavior and so it has been an excellent learning opportunity for me.

Kokoda has a previous history with the harness, starting with an initial exposure at around 4 months of age, when I began training her to accept wearing it. We started very slowly, and over the period of four weeks, I trained her to voluntarily place her head through the harness and then eventually worked up to me lifting her wings through the wing holes and tightening the harness around her. Unfortunately, towards the end of the training, I began to rush the process—one of my dogs ruptured her cruciate ligament and needed to go to Perth for surgery, so I wanted Kokoda ready to wear the harness for the trip to Perth, which would have us away from home for a week.

My haste meant that the positive associations Kokoda had been building with the harness began to erode, and she started to fight having the harness put on. I believe this is because I had rushed the last part of the training, our relationship was still very new, and she is not fond of handling, especially her wings. I kept persisting, but her behaviour became increasingly fearful and anxious when the harness was brought out, so I ceased using the harness altogether until I could implement more training.

Having Kokoda harness trained is very important to me; not only does it allow her to interact and explore the outdoors and to be more included on our camping trips and holidays, but it will also give her the ability to stretch her wings and fly safely outdoors.

She still regularly comes out with us on walks and camping trips but is confined to her Pak O Bird carrier. Allowing her to accompany us is important because I want her to enjoy the outdoors, so that this can eventually become part of the reinforcement for harnessing.

I have developed a training plan to help reintroduce the harness to Kokoda. The first thing I need to do is address the current underlying emotional responses to both the harness and the handling required to have the harness put on properly. If I can build a strong positive conditioned emotional response to these procedures then training Kokoda to cooperate where possible to get the harness on will be much easier.

I will need to counter-condition Kokoda to the following elements of being harnessed:

Once desensitization and counter-conditioning are completed, I will work on specifically training Kokoda to cooperate with the harnessing where possible.  This will include voluntarily placing her head through the head hole and lifting her wings to help position it around her body properly.

As I have a long history of working with Kokoda on training exercises I already had a very good idea of her favourite reinforcers. These include sunflower seeds, organic fruit baby food, palm nuts, and egg and biscuit mix with coconut or almond milk.

I chose to use both the egg and biscuit mix and the baby food for these counter-conditioning exercises because they could be given through a syringe or squeeze pouch, and they also gave me the ability to offer continuous reinforcement.

These videos are a diary of how I implemented the training plan with Kokoda. Behaviours I am looking to avoid include growling, moving or flying away, pulling away or crouching away, lunging, and biting.

In this video, we are working on counter-conditioning Kokoda to the presence of the harness. In the beginning, you will notice her move away when I initially lift the harness up, as I have it a little too close to her. As we progress, she becomes increasingly comfortable with the harness.

More work on counter-conditioning to the harness approaching her, as well as some general movement of the harness nearby. A couple notes on some behaviour seen in this video – her “hackles” are raised for a lot of it, and you will see some “baby feeding” behaviour – in this video primarily head bobbing while taking the food, but this can also include sitting low, wings held away from the body, quivering, head tilted upwards, mouth open, and calling noises – ; this is due to the use of the soft baby food in the pouch, which I have found causes some extra arousal. When the same food is in a syringe she does not react this way.

In this video, I am working on initially having Kokoda place her beak in between my thumb and fingers, and then I add in the harness later. The idea behind this exercise was primarily to desensitize and counter-condition her to my hand coming towards her face with the harness. My hope is that I could possibly also use this beak-targeting as an operant behaviour as part of training her to cooperatively have her harness placed over her head: I would cue her with my fingers to place her beak there, so I can then lift the harness over her head. It also acts as a good intermediary between just counter-conditioning her to the presence of the harness and moving the harness towards her.

I had to take a step back at the beginning of this video, as Kokoda initially became anxious about the presence of the harness on my hand. We did a few repetitions without the harness and then I added it again without issue. I am trying to gradually have her place her beak through the harness a tiny bit on her own. I am using my fingers to keep the harness open, and I am using the wing opening instead of the head opening because it is adjustable and larger—I can start with the opening very wide and gradually make it smaller as she becomes more comfortable.

We start where we left off in the previous video, working on having Kokoda place her beak just through the harness opening to get the food. Approximately 50 seconds in, you will see her body language change a little (crouching lower, pulling backwards) as I place the harness farther over her head on two occasions. These behaviors suggest that she is feeling anxious, so I switch back to where I was placing the harness before.  About two minutes in, I begin moving the harness farther over her head and towards her neck again; this goes well until around the 3:30 mark, where she growls and lunges at me. We resume after this without any other issues.

At this point I feel like we are making good, steady progress, as it should be with counter-conditioning. Kokoda and I will keep on with our training sessions with the harness and I will continue to document them in the next installment of our diary.

Lee Stone CPDT-KA is the owner of DogTag Dog Training in Port Hedland, Western Australia. Lee has a passion for anything animal behaviour and is working towards building a multi-species behaviour consulting business.