Is a Busy Parrot Really a Happy Parrot? 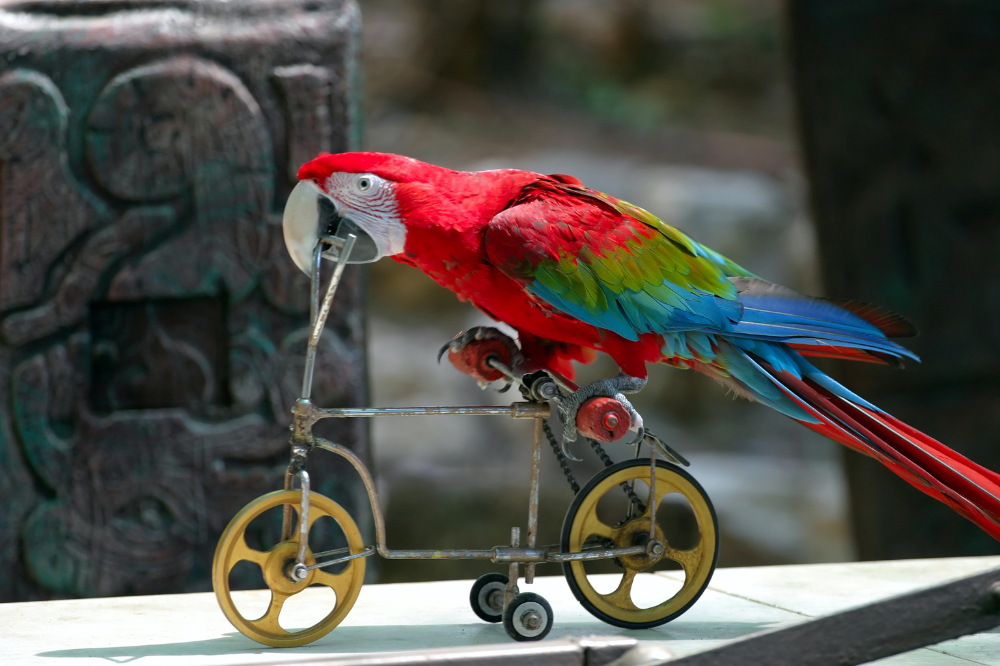 Summary: As bird owners, we are quickly taught that toys are super-important for parrots. We need to keep them busy to avoid boredom and stereotypical behavior, and to keep them healthy. Keeping parrots occupied is indeed an important part of bringing them in to our homes, but it’s time we realize there’s a lot more to a happy, fulfilled life than being busy, and maybe we should start looking at toys for what they really are the majority of the time—replacement.

There is a fundamental difference in the quality of assorted activities, even ones that would look very similar if someone else observed you doing them. Reading a book that I like because I really want to read it is fundamentally different from reading the back of a shampoo bottle because I don’t have much else to do. In both cases I am engaging in reading behavior, and to an outside observer looking at my behavior it looks pretty much the same. But I am engaging in those reading behaviors for very different reasons, or, in other words, my reading behavior has different functions.

Many factors can affect the quality of an activity, or rather how much and in what way that activity will affect my experience of engaging in it. One example is how often we engage in them. I really like reading a good book or watching a good show for an hour or two, and during that time I’d feel the activity was really fulfilling. If, however, I had nothing else to do except read the same book for eight hours a day, I would probably not be quite as pleased. However, as there are no or very few other reinforcers available to me in this scenario, I’m still likely to keep reading most of the time. The reinforcing value for reading a book for that long is low, but it is the only reinforcer available.

The quality of an activity depends on the complexity of the situation, and what other reinforcers might be available at the same time. Eating a meal is a drastically different experience depending on if we do it alone or in the company of others. By including other individuals, we have increased the complexity of the situation and possibly added many more available high-value reinforcers in the shape of active or even passive interactions with others—just quietly being in the same space can be very reinforcing to social animals like ourselves, as well as to parrots.  The observable activity of eating is the same, and it also has the same function of ingesting food, but the subjective experience is still different. Of course, there is also the fact that getting to choose what food to buy and when to eat it will likely increase the reinforcing value of ingesting that food, as opposed to just passively being served what someone else thinks I should eat at a set time.

So what has this got to do with parrots? 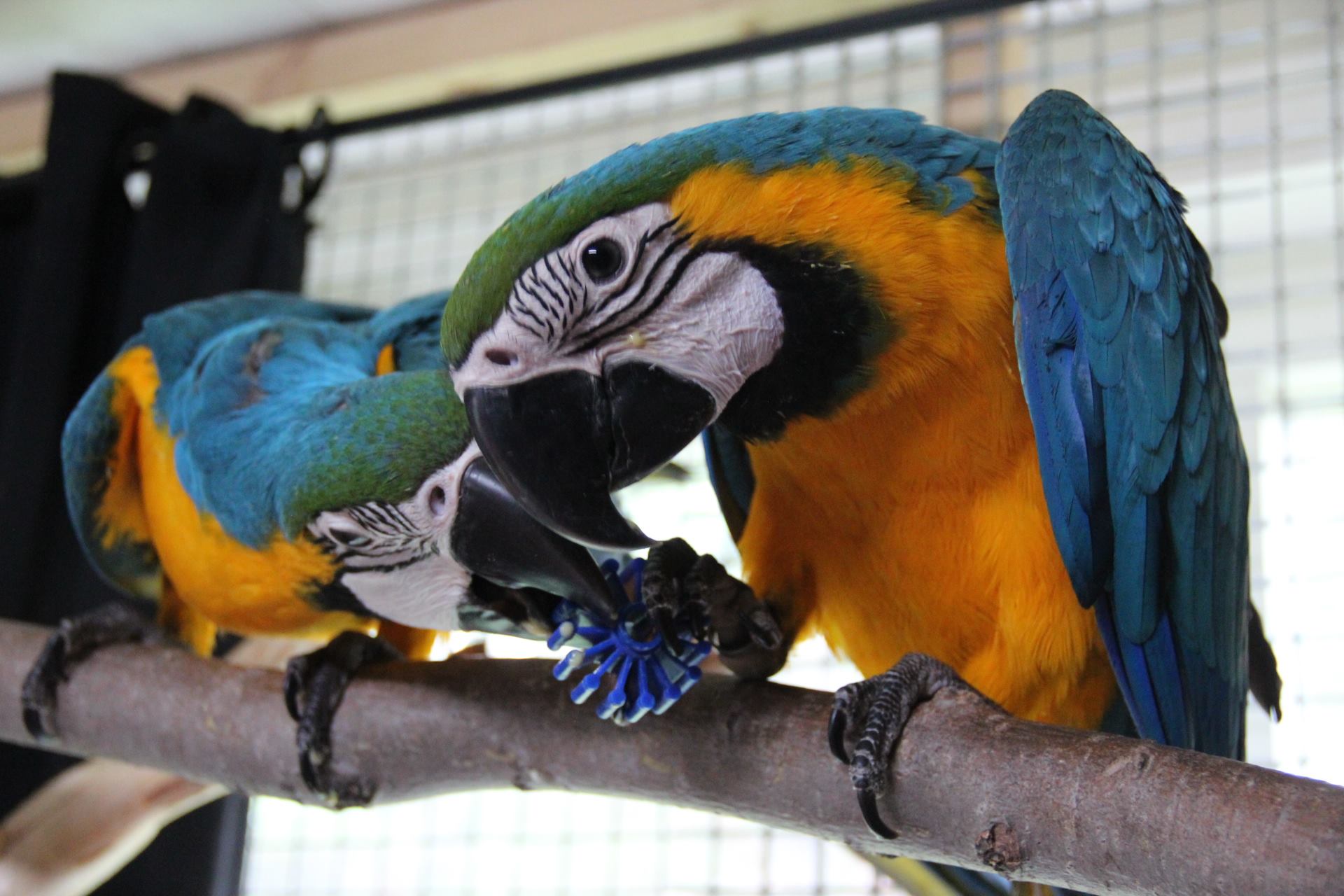 A common mantra in the companion parrot world is that a busy parrot is a good parrot. The thing is, there is so much more to enrichment that simply keeping animals busy. Being busy does not equal a high quality of life. When working with enrichment in zoos, we look at how to arrange the environment so that it is qualitatively similar to the kind of context an animal has evolved to live in, and not just that the animals spends a certain amount of time doing different things. (Even though time budgets are really important, too.) This becomes very clear as we look at one of the definitions of enrichment: “A process of improving or enhancing [zoo] animal environments and care within the context of their inhabitants’ behavioral biology and natural history. It is a dynamic process in which changes to structures and husbandry practices are made with the goal of increasing behavioral choices to animals and drawing out their species-appropriate behaviors and abilities, thus enhancing animal welfare.” (AZA Behavior Scientific Advisory Group, 1999).

This is why we put a lot of energy into making sure that social animals, such as parrots, live in stable social groups. For many species, this has proven to be one of the most important things we can do to improve their welfare. One study at UC Davis (Meehan, Garner & Mench, 2003) indicates that some parrots that are housed together are less prone to stereotypical behavior, and also spend more time engaging with enrichment. (As a side note, I do want to point out that social housing of parrots isn’t always easy or risk-free. It does, however, likely have many benefits and can be a relatively simple affair under the right conditions, for many birds.) 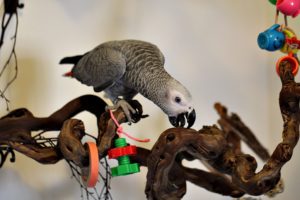 We also know the importance of allowing parrots to chew things, but did parrots really evolve to spend their lives aimlessly chewing anything and everything in their path, just because “why not?”  Even though it might seem like it when we share a home with one, we know that ever-growing beak evolved because it helped parrots achieve certain goals, like cracking nuts and making nest cavities. And sure enough, laboratory studies of parrots have shown that if they are served bigger pieces of food that enable them to use their beak more when eating, they chew up to 50 times less on enrichment items provided to them, as measured by comparing the weight of chewed-off wood (Rozek et al, 2010). They also show a clear preference for the larger food items when they get to choose, according to the same study. Makes one wonder if spending hundreds of dollars on destructible toys just for the sake of chewing really is that important, especially when fresh branches are very appreciated chewing material for most parrots.

Take a look at how the grey parrot in this video is tearing up this paper cup filled with paper material and his regular pelleted diet. He is doing what he does with a clear purpose, as he knows from experience these cups contain food that can be retrieved if manipulated correctly. He also has to focus on keeping his balance on the swaying rope where it has been placed, and to use many of his physical abilities and past learning to succeed. Also note how the Jardines, who is completely naive when it comes to this kind of enrichment, watches what the grey parrot does and soon starts joining in on the activity, even though she doesn’t really know what it’s about yet. It’s a great learning experience for her, and a good example of social facilitation and learning of an important skill in a parrot-parrot interaction.

Exercise is also important, and, you’ve guessed it, it too can be very qualitatively different. Walking back and forth for no reason isn’t very fulfilling, and most animals would not engage in behavior like that if there are other reinforcers available. Moving around between important resources provides a clear function for movement, and that’s also exactly what parrots would do in the wild.

What we tend to do when we’re designing enrichment for birds in captivity is, in my opinion, backwards reasoning. We place all a bird’s important resources in one place, observe that the bird doesn’t really move around a lot (which makes sense, since the behavior wouldn’t have a function), and then use this lack of movement as an argument for taking their flight ability away or letting them spend hours in relatively small cages. We provide fewer and fewer reinforcers and the behavioral means to earn them, when what we should be doing is the exact opposite: spreading out resources and encouraging species-appropriate forms of movement with a purpose.

Another very natural behavior that is the very opposite of being busy is resting. Wild parrots rest quite a bit too, at least according to the various studies where wild parrot time budgets have been observed.(4) Following the theme in this article, the quality of the rest we get varies a lot, due to environmental factors such as having a calm and suitable place to do it, but also depending on how we spend the rest of our time.

We tend to get the highest quality rest when we feel safe, when we get enough exercise, and when we spend the time we are awake doing meaningful things—behaving with a function. After all, the whole purpose of resting is to regain energy to do more of those things later. That is not the same thing as simply being inactive. One might also hypothesize that resting with other individuals close by might increase the quality of rest for a highly social prey species like parrots.

When looking at other animals, we can observe some pretty neat illustrations of how different “being still” can be. As an experiment, an ethologist friend of mine compared rabbits that are housed in cages with rabbits given a larger space to live in, to see how that might affect the way they rest. Both groups spend some of their time inactive—the caged rabbits a bit more so—but they did it in different ways. While the free-range rabbits tended to lie down more, the caged rabbits spent a lot of their time sitting—something that was very rarely observed in the free-range group.  In fact, even though the caged rabbits spent more time being inactive, the free-range ones spent more time actually lying down and getting qualitative rest. This is not a published or peer-reviewed study, not to mention it looked at bunnies—however it would be very interesting to see what observations a similar setup would produce with parrots.

Here too, I feel we sometimes see some backwards reasoning in the companion parrot community:

”My parrot just sits there while I’m not at home anyway, so being alone in a small cage doesn’t really matter.” 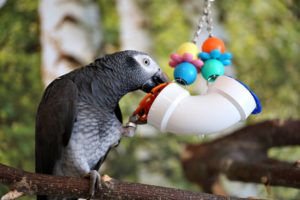 I would argue it does, very much so. In fact, I would even argue that is the very problem! For a companion parrot, living a meaningful life shouldn’t have to depend on us engaging with them when getting home from work. We need to find more ways to provide them with choices in what activities to engage in—be they social, foraging, exploratory, or something else, even (or perhaps especially) when we are not around.

I think that we are limiting ourselves by looking at toys as synonyms for enrichment. By focusing on simply keeping parrots busy, and not looking at the quality and quantity of choices and activities we provide them with, I would argue we are making our parrots miss out on many of the things that really make life worth living to them. I do think toys have an important part to play, though. Not only toys as they are marketed to parrot owners, but the opportunity for the parrot to examine and interact with new objects and engage their different senses is indeed an important part of a parrot’s day—with the emphasis being on part.  Just like with my example of reading the same book eight hours a day, even something we would enjoy and greatly benefit from can become meaningless if we engage in it excessively and for the wrong reasons. I say it’s time we focus on providing parrots with the opportunity to live meaningful lives, rather than just keeping them busy.