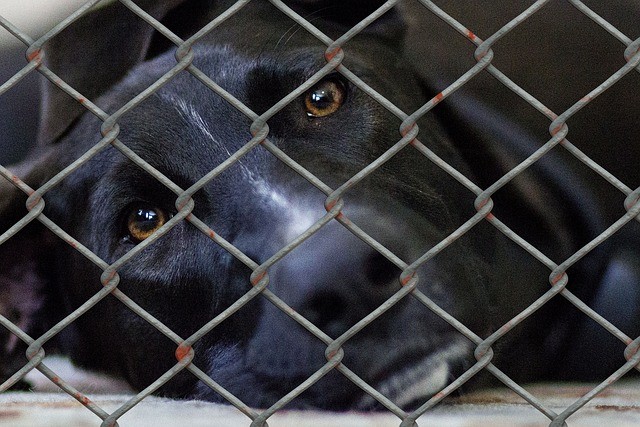 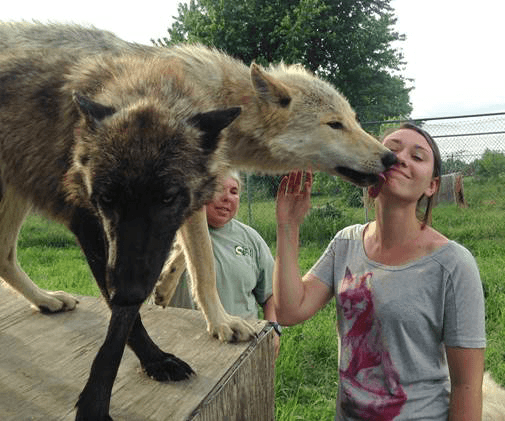 “I was actually planning to be a veterinarian.”

And so were declared the earliest professional aspirations of Alexandra (Sasha) Protopopova, PhD, a scientist whose work is finding a varied and eager audience in the animal welfare world these days. With a doctorate in behavior analysis and more than a dozen published works on dog behavior, Sasha has accumulated some significant accomplishments in her 29 years and is creating some new ways of thinking about how shelter dogs get adopted in the United States.

Sasha grew up in an academic community in Russia, a stone’s throw from Belayev’s famous fox farm. Her love of animals started early; her childhood reading list included James Herriot, Jack London, Jane Goodall, and Dian Fossey. Her first pets were the lab rats her parents brought home from work, and her first best friend was a neighbor’s dog with whom she enjoyed play dates in the community. When she was 8, her parents moved to Stockholm in pursuit of work; dogs not being commonplace in Sweden, Sasha took dressage classes to feed her growing love of animals.

At 16, the family relocated yet again to Massachusetts, and Sasha took a part-time job walking dogs, which was a natural segue to training. Said Sasha, “I started looking up alternatives [to the force-based training methods she learned first] and discovered Karen Pryor. The rest is history.” During her undergraduate studies, she also began working as a trainer at Petco, which helped to grow her interest in the area of applied behavior.

Sasha is a third-generation scientist; her parents are cancer researchers, her grandparents a mix of mechanical, computer, and nuclear engineers. She maintains that her parents never encouraged nor discouraged her career or academic choices, but their influence was clearly felt.

I think probably this is what led me away from cognitive psychology or comparative cognition and more towards behavior analysis. That kind of search for prediction and control of behavior, a more hard science. I like seeing behavior change from an experimental perspective. . . I’m not very interested in the philosophy behind mental processes or the mental constructs of behavior. I’m much more interested in the “this is the problem, how can we fix it,” so much more of that kind of rigor in science, and bringing psychology out of the philosophy realm into a hard science realm. I think that has been more the influence of my parents.

Sasha’s passion for animals left her parents, who are very basic scientists, with some concerns for her future.

Maybe because I was reading all these animal books. . . When I was a child, I had a conviction that if I take a wild animal and just raise it right and I just made sure to control the environment, I’m not going to get eaten. As they kept telling me, my parents’ biggest worry was that I’m going to start working with zoo animals and be one of those crazy people who live with bears and then gets eaten!

Sasha completed her undergraduate work at the University of Massachusetts with degrees in neuroscience, and veterinary and animal sciences. She then headed off to the University of Florida to continue her education. A mentor convinced her that she could pursue scientific work and still be involved with animal behavior, and her career course began to change.

I found a way to combine my applied interests with animal behavior research, in the field of behavior analysis with Dr. Clive Wynne. I got my MS and my PhD with him. It was the most fantastic time (but maybe the hardest) of my life!

A significant theme in Sasha’s research is examining which factors influence dog adoptions in municipal animal shelters. Her interest in this area stems back to a suggestion she received from Wynne, with whom she went on to author several papers.

Clive suggested that I look at the Luescher and Medlock (2009) study [The Effects of Training and Environmental Alterations on Adoption Success of Shelter Dogs] as a jumping point for my MS and it took off from there. I had volunteered in shelters before, but nothing as intensive as I have done after.

Having completed her master’s and doctorate work in behavior analysis, Sasha has now established a research team at Texas Tech’s Human-Animal Interaction Lab. She and her graduate students work with staff and volunteers in public shelters to identify what can be done to improve dog adoption rates, particularly in the area of dog-human interactions. As she puts it: 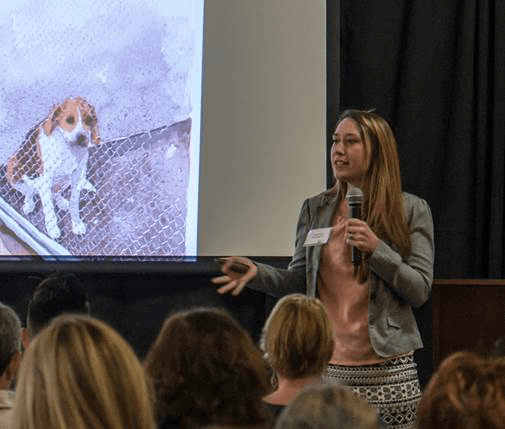 Previous research in behavioral training has not been effective. Is it possible that we are not seeing effects because we assume what it is that people want in a kenneled dog? We keep training sitting and not barking, but is that what people want to see?

Her studies have produced some eye-opening results. Where previously it was believed that dogs who could sit, make eye contact and greet without jumping up had a greater chance of adoptions, Sasha’s research revealed that dogs who would lie down quietly next to the potential adopter and respond to their play invitations were most likely to go home. Further studies looked at the easiest way to train these behaviors, and how to determine what a dog’s play preferences were in order to best showcase sociability:

Dogs have stable toy preferences, enabling us to tell the adopters what toy the dogs like most and thus decrease the likelihood of the dog ignoring play initiations by the adopter. Through structuring the interaction between potential adopters and dogs during their initial meeting, we were able to improve the dogs’ behaviors and were able to increase adoption rates.

While the research team’s focus is on the dogs that participate in the studies, the human influence is ever present. Sasha’s work includes shelters in a number of locales, where she’s found more similarities than differences:

A lot of the research I do, and I focus my research on county or municipal shelters, the culture is generally similar even across the states. I think it’s because the pressures are all the same. They’re in a very difficult situation, in that they’re animal lovers, but they do not have a lot of community support. Usually they’re struggling with having the community think of them as the evil people who kill dogs, and not realizing that the euthanasia decisions at the shelter stem from the actions of that community. 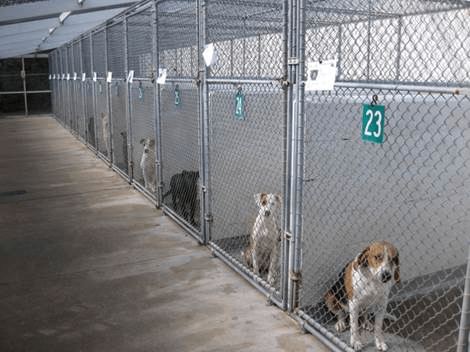 What is the impact on the shelter staff and volunteers of having academics conducting research in their facilities?

I have a lot of sympathy with shelter workers, especially the directors and the staff. Usually, all it takes is just to show you understand what is going on. That you can see their reality. I think the difficult thing is that they want to show the reality to the community, and yet, in showing that reality, they’re admitting in a sense that they do, in fact, have to euthanize a lot. If the community is already closed-minded, there’s a difficulty in that this transparency can backfire. So I think there’s a lot of desperation in the county and municipal shelters where they really just want to be understood and have the community fixed. Because it’s the community that has to change.

Sasha’s been working in animal shelters for many years now and is optimistic about what the future may hold.

I’ve seen change in fantastic ways while working at shelters. In Gainesville, Florida, when I first started hanging out around the shelter there, there was a bit of tension between the community and the shelter. But with time, with many national initiatives, input from the staff and community, and education of the community, we’ve seen just absolutely amazing transformations, so that now the whole community is on the same page with the shelter, and they’re all working together—all the rescues are working together. And so I do always have a bit of an optimistic view of this, which is that it always improves. So we’re always in our worst moment, in a sense.

There are so many amazing things that are going on. For example [in Gainesville], there was a single person who decided to organize a Facebook page where everyone can put in their lost and found animals to keep them out of the shelter. Maybe this just raised awareness that the shelter exists, or maybe helped to create a culture where abandonment was publicly scrutinized, but I think it had a great impact. National initiatives, such as the Maddie’s Fund shelter vet school and Rachel Ray’s competition between shelters, for example, also made a very big difference in that community.

Compassion fatigue is an ongoing concern for herself and for her graduate students. Sasha’s approach is to balance compassion with practicality. Coping mechanisms include creating structured work plans that define which animals each researcher will work with, as well as forbidding adoptions by the team members during the course of the study. While rules do get broken, providing this framework helps to maintain the direction that the dogs are participants in the research, rather than individual personalities.

For a lot of my students who come in to work at the shelter, it’s a very emotional experience since we got into this research because of our love for animals. Things can get particularly difficult when we’re working with the stray dog population, you go “in the back” and take a look at what’s going on with all of the abandoned dogs, it’s a very emotional experience. So I think it helps to approach things practically. That way, we can maximize the benefit that can come from our research without succumbing to compassion fatigue.

Below are a few of Sasha’s studies. You can find a more comprehensive list on her faculty website.

Barbara Davis, CDBC, has been in the training and behavior field for more than 30 years. An IAABC founding member, Barbara has served on the Exam Committee, the Application Review Committee and has been chair of the Dog Division since 2013. She has written content for APDT and CCPDT websites and contributed to www.mydoghasclass.com. Barbara is also a mentor for IAABC’s premier educational program, Animal Behavior Consulting: Principles & Practice.