I Got a Kick Out of You… 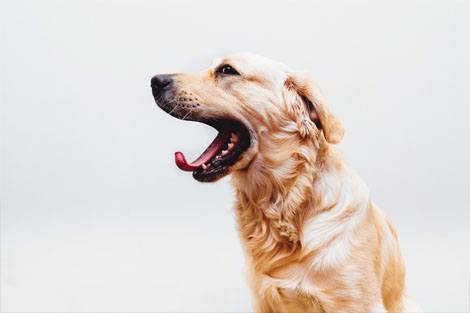 Pavlov was scooped, but nobody noticed.

Most people have heard of Ivan Pavlov and his dogs, and many are aware of the specifics of his discovery. He accidentally conditioned dogs to salivate at the sound of a buzzer, and then realized what he had done and some of the profound implications. But hardly anyone knows that at the same time, the American Edwin Twitmyer also discovered the conditioned response. His discovery involved a different reflex but was similarly accidental. His research was published in 1902­–a year before Pavlov’s. This is the story of his discovery and the underwhelming response it received.

Edwin Twitmyer, a graduate student in psychology at the University of Pennsylvania, chose to study the human patellar reflex for his doctoral research. By 1900, physiologists knew that there was a lot of variation in the knee jerk response between subjects and even between responses by the same individual. Warren Lombard had determined variations in the knee jerk having to do with time of day, temperature, and barometric pressure.  The physician Ernő Jendrassik discovered a clever way to thwart the attempts of patients to game the reflexive response when the patellar tendon was tapped.

Twitmyer set out to record multiple observations of the knee jerk under controlled conditions and to define and codify the responses. He noted that “when the patella tendons are struck at exactly the same place with blows of constant force and at regular intervals, no two of the resulting knee jerks are of the same extent”. He wanted to find out if he could draw conclusions about the variation in the responses and come up with a reasonable definition of a normal range. He had access to a pool of research subjects: other psychology students. He recruited 17 males and commenced his research. He studied the knee jerk under both “normal” conditions and with various adaptations. He controlled for the variables that Lombard had discovered.

Twitmyer also hoped to find evidence as to whether the knee jerk was a true reflex, a mechanical response to sudden pressure on the patellar tendon, or a combination of the two. He conjectured it was the last of these, and he was correct. The hammer tap stretches the quadriceps muscles in the thigh. This stretching triggers a monosynaptic reflex. The message is sent to the spinal cord, and a return message causes the quadriceps to contract. When the leg is hanging free, this causes the leg to kick.

The purpose of the patellar reflex is not to kick doctors. That it can be triggered when the subject is sitting with legs swinging free is a fluke. In normal life, with feet on the ground, the patellar reflex helps the body balance in specific situations.

Twitmyer set up mechanical pendulum system in his lab so that the tap of the hammers on the patellar tendons would be uniform. In most experiments, both knees were tapped at once. There was an automated warning bell that warned the subject to prepare for the hammer taps. Twitmyer set up a mechanical method of measuring the extent of the kicks as well. There were strings tied to both of the subjects’ feet, and these were connected via a pulley to an apparatus that somewhat resembled an analog seismograph with its turning roll of paper and moving pen. Twitmyer noted that the friction of the pens on the paper and the balancing weight on the pulley were minimized so the resistance added to the kick was negligible.

Twitmyer kept data of all the responses of the subjects, including one subject who had no response to the tapping hammer at all, ever. Today we would question whether this student had a neurological problem.

He found over the course of 60 experiments that the average knee jerk of his subjects varied from 0 – 165 mm, and concluded that it was not really possible to assign a “normal” range of motion to it. He examined the subjects’ knee physiology to determine if there were a relationship between this and the extent of the kick and could find no correlation. Ditto for muscle tone. He conjected that the differences in kick magnitude were probably due more to the “irritability or conductivity, or both, of the nervous structures involved in the knee jerk mechanism.” He also studied the swing of the leg after the reflexive kick.

And that would have been the extent of it, except one day the bell rang without the hammer tap. It just so happened that a subject with a very robust kicking reflex was sitting in the apparatus. He kicked. Twitmyer’s discovery of respondent conditioning, like Pavlov’s, was an accident. 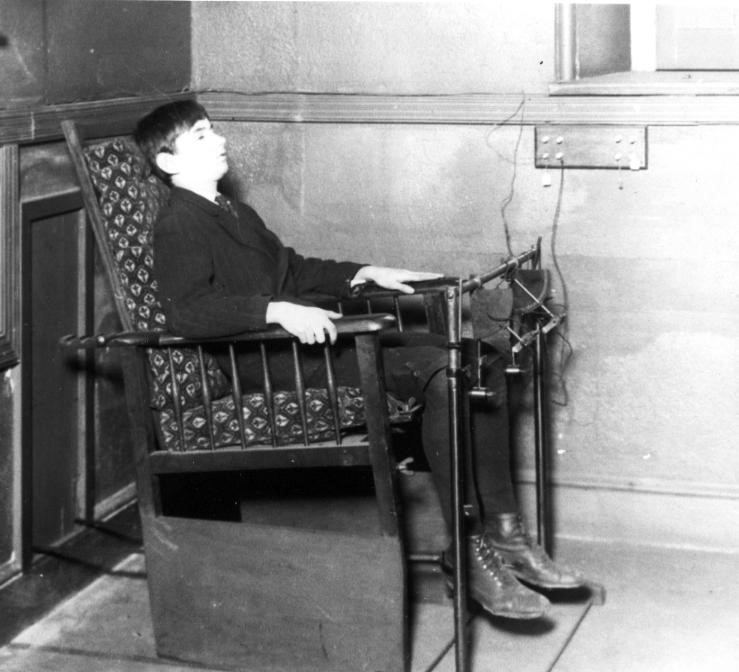 Twitmyer’s experimental setup, from the University of Pennsylvania archives.

Here’s how Twitmyer described the incident in his lab and his curiosity about it:

During the adjustment of the apparatus for an earlier group of experiments with one subject (Subject A) a decided kick of both legs was observed to follow a tap of the signal bell occurring without the usual blow of the hammers on the tendons. It was at first believed that the subject had merely voluntarily kicked out the legs, but upon being questioned, he stated that although quite conscious of the movement as it was taking place, it had not been caused by a volitional effort, and further, that the subjective feeling accompanying the movement was similar to the feeling of the movement following the blow on the tendons with the exception that he was quite conscious that the tendons had not been struck.

Two alternatives presented themselves. Either (1) the subject was in error in his introspective observation and had voluntarily moved his legs, or (2) the true knee jerk (or a movement resembling it in appearance) had been produced by a stimulus other than the usual one.

Twitmyer figured he was on to something, so he turned his research in that direction. He first performed a series of experiments on the subject who had exhibited the leg kick in apparent response to the bell.  During these experiments, the hammers did not always touch the knee after the sounding of the tone. (They were dropped, then caught, in a maneuver that the subject couldn’t see.) The subject did not know when the hammers would touch and when they would not. The subject consistently kicked after the tone, even when the hammers did not drop. Twitmyer ruled out other explanations for the kicking. 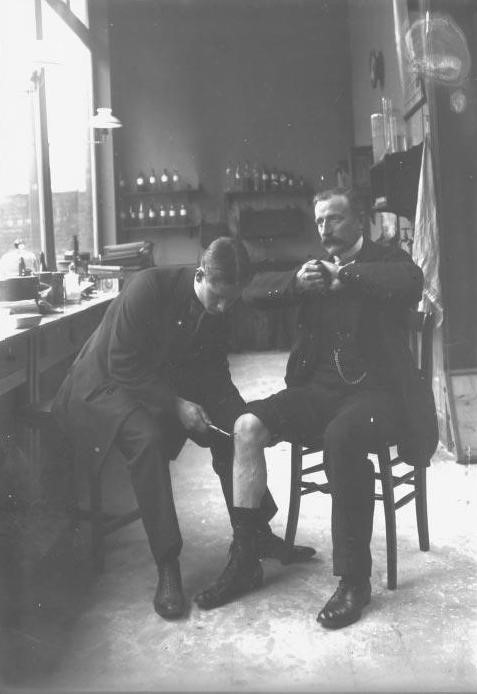 Twitmyer then added five more subjects. He got consistent kicks from one other subject and a few kicks from three others. Only one subject failed to kick at all in response to the tone alone in the first round of experiments. After implementing some measures to enhance the possibility of response to the tone alone, all of the subjects were kicking away at the sound of the tone. Twitmyer noted later in a short journal article in that it took between 150 and 238 pairings of the bell and the hammer to condition the reflex. Most of his subjects had different magnitudes of responses from their left and right legs. Interestingly, these differences were maintained in the left and right leg responses to the bell as well.

But there was one more twist. At least one of the students was secretly trying to suppress the jerk. These were psychology students, after all. Twitmyer had carefully hidden the purpose of the experiments where the hammer didn’t always strike, but it must have become fairly obvious. The student was interested and fiddled with his responses, but he wasn’t able to suppress the jerk. He finally confessed his attempts to Twitmyer, who promptly added it to his dissertation. Some reflexes can be suppressed or circumvented to varying degrees. But in the case of the knee jerk reflex there is a way to prevent most deliberate modifications of the reflex movement by the subject, and Twitmyer was probably aware of that. As previously mentioned, a Hungarian physician named Jendrassik had discovered that asking his patients to clench their teeth and interlock their fingers generally enhanced the magnitude of the patellar reflex and prevented its suppression. Though he doesn’t refer to it by name in his dissertation, Twitmyer was probably familiar with Jendrassik’s maneuver. Twitmyer mentions throughout his dissertation that he required his subjects to “clinch their hands,” as he put it, as they prepared for the hammer tap. Try as he might, the would-be saboteur couldn’t suppress the reflex while following the instructions to “clinch his hands.”

Twitmyer’s discovery was one of the milestones of science but wasn’t recognized as such. He presented his research results at a meeting of the American Psychological Association in 1904 but had an unfortunate place in the schedule. By the time he got to speak, lunch was overdue. Perhaps the audience members were even salivating in anticipation. In any case, the eminent William James, probably in response to his own rumbling stomach, whisked through the possible question period and called for a lunch break. Hardly anyone took notice of Twitmyer’s discovery. You’d think that triggering the knee jerk reflex without touching the leg would have been viewed with amazement, but no. Although he had a successful career, he never performed another experiment along that line of research and most of us have never heard of Twitmyerian conditioning.

Eileen Anderson writes about learning theory, her life with three dogs, and training with positive reinforcement on her award-winning blog and has recently published a book on canine cognitive dysfunction. She holds bachelor’s and master’s degrees in music performance and a master’s degree in engineering science.