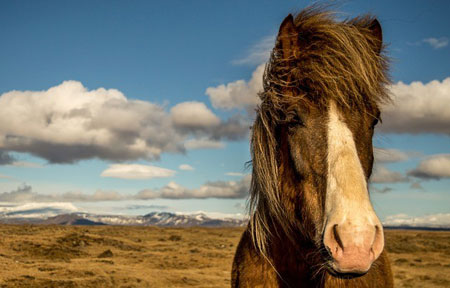 One of the benefits of training with positive reinforcement is eagerness in training. Getting an experienced animal to come to you or stay with you is not usually a problem. Yet the pendulum swings both ways. We must train our animals what they should do instead of being underfoot. One of my horses has taught me the importance of paying attention to emotions while doing this.

This individual is a very eager participant in training. Foaled on my farm, I used positive reinforcement with him from birth. He soon demonstrated enthusiasm for responding to cues, offering new behaviors, and always wanting to be an active part of whatever I was doing. This was somewhat problematic due to the barn and pasture setup I had at the time. The barn aisle was his shelter, and I had to go through his pasture to get to the barn. Whenever I was in the barn for any reason, he was either right with me, or I had to reinforce him for being somewhere else.

I trained many behaviors to help with this:

What I neglected to teach him was how to ignore me. It never occurred to me that would be something to teach. Yet I had a horse who did not relax in my presence. Instead, he would volunteer behaviors with intensity and repeat them or vary the criteria.

An example: I had taught him to back away from his stall door when I opened it to allow me space to enter. This worked well at our previous farm when he was rarely confined to his stall unless I was going to work with him. When we relocated to our present farm, he had a stall for his shelter, with a door out the back to his pasture. Now his first contact with me was not in his pasture but in his stall, when I entered via the barn aisle. Eager to take part in training sessions, he would come right into his stall when he heard me. Then he was quick to back away from the stall door when I approached, even if I was simply walking through the barn and didn’t even stop at his door. I had a physical structure between us while I worked, but he was not getting the interaction. If I did not go to him, he exhibited signs of frustration such as ear pinning, tight facial muscles, and circling in his stall. I was often in the barn with students or doing daily chores so he would repeat this many times a day.

I decided I needed to desensitize this horse to my presence. Often when we are working with desensitization, the animal is reacting in a way that we would label either fearful or aggressive. But I saw this horse’s intensity in wanting to work as similarly sensitized. Most people are looking for that attention, willingness, and eager curiosity. This horse had those traits in spades, so I was working on the other end of the spectrum. I did not want to lose that interest, of course. I only wanted to be able to help him relax in my presence at times and “be a horse,” as opposed to an eager student, every second. I would need a cue of some sort to help him understand when I was not going to engage with him.

Environmental and body cues are often the easiest for animals to understand. I decided on his stall as a cue for zero interaction. After all, that was the environment I most wanted to work in without interrupting him. I wanted to be able to pick manure out of his stall at late-night chores in the winter, top off his water bucket, and check on him without having him leave his pile of hay to back up or lower his head or hug me or any number of other things he would offer. For this cue to be consistent, I could no longer train in his stall. When I wanted to work with him, I’d take him in the aisle, outside, or in another stall, not his.

In true desensitization, the animal should be kept “under threshold.” This would mean that the horse does not exhibit any of the emotional signals that we have interpreted as indicative of the undesired emotion. With fearful animals this could be slowing of the steps, elevated head, increase in respiration, turning the head away, etc. With my overly interested horse, it was ears and eyes on me, nickering, and approaching me. The first indicator was usually ears and eyes on me.

The other big piece of desensitization is that the animal should not experience any situations where he goes over threshold during the lengthy process (weeks, months!). I couldn’t ignore my horse completely for six months or a year while we worked on this. Luckily, I was able to work it into my routine. I began in the fall, when the horses weren’t coming into stalls until late at night. At that time, I didn’t need to go into his stall when he was in it. I could let him in, close the door, and leave until morning when I would let him out again.

To begin, I let him into his stall with hay, but instead of leaving the barn I would stand in the aisle, starting about 25 feet from his stall. He was eating his hay and with me at this distance, he did not pop his head out and nicker at me. I leaned up against the wall and looked anywhere but at him. I was adding the cue of my casual body position. I’d stay there for about five minutes and then leave the barn. Each night I moved a little closer, making sure that I kept him under threshold. If he picked up his head to look around and chew, he’d see me there, but the distance and my posture did not pique his interest.

After many nights, I had progressed to leaning up against the wall of his stall. I have doors that swing open in the grills of the stall so the horses can put their heads out. The first time I was actually within reach of him, he stuck his head out to sniff me. I stayed relaxed, kept my eyes off him, and after a moment he went back to eating his hay. We had developed a routine by then, which he understood was a time not to offer behavior. The next step was to rest my chin on my arms on the opening, so my head was half into his stall. I wanted to mimic the casual stance of someone hanging out with their horse. He would sometimes sniff my hair or nuzzle my ear. If I focused on my own breathing, he’d go back to munching on his hay.

The next step was tricky because I couldn’t progress by climbing in that opening in the grill.  To get into the stall with him meant opening his stall door. That had always been a cue for backing, usually followed by training. But I had now developed a history of the time of day, my posture, and my relaxed breathing to transition with. I opened the door only a crack and leaned up against it. He responded to the old cue by coming over immediately, but once he saw my body cues, he returned to his hay.

After that, I could open the door farther each night; after a few nights he was no longer coming to the door when I opened it. Once inside, I continued to get closer to him until I was right next to his hay pile. I was able to slide my back down the wall so I was squatting right next to him as he continued to eat.

Now we had an evening routine in place for transitioning to my winter schedule. Once the bitter northern New England cold and winds come, I close horses into stalls with feed in late afternoon. At 9p.m. I return for my late-night chores, and so I was now entering the barn when he was already in it. He would nicker when I entered as all the horses do in anticipation of more hay. But after tossing the hay in his stall, I could slide the door to his stall open and it was not a cue for work or play. He remained with his head in the hay pile. I had to work very hard on my own body cues when I went in to pick out his stall so as not to invite interaction. He loves to play tug of war with the pitchfork handle. I needed to keep moving slowly, not look at him, and focus on picking poop.

It’s now March, and we are in good shape. He keeps his nose in his hay when I go in with the pitchfork. When I get in his line of sight, he’ll turn his head to look at me but his head is actually below withers height which is a relaxed position. I go to his head and vary a hug, or a withers scratch, or a free treat from my pocket, or a kiss on his muzzle. He accepts them all and returns to eating.

I am seeing this reduction in stress translate to other situations. When I put him outside with hay in the morning, he will allow me to come over and hang out with him while he eats, rather than trying to see what he can engage me with. The hay could be an additional cue of course, but I’m seeing a more relaxed horse overall. I continue to train at other times in other places with no reduction in enthusiasm or focus.

My plans are to assess how effective the various cues are in different scenarios. In the summer, the horses are outside at night. They come in their stalls midday to escape from the sun and bugs. If he is eating hay then and I go in his stall, will he remain calm?  If I go in the paddock with him and lean against a fence the way I did in the barn, will he stay relaxed or offer behaviors? I would like to see this change in behavior generalize to other situations so that if I don’t offer cues, he doesn’t offer behaviors. At least, for now, we have made improvements.

Jane Jackson is a trainer of horses, dogs, and people. She is a Certified Training Partner with Karen Pryor Academy, an approved coach under Alexandra Kurland, and a Level 3 TAGteacher. She trains out of her Bookends Farm in Sheffield, Vermont, and travels to conduct clinics.