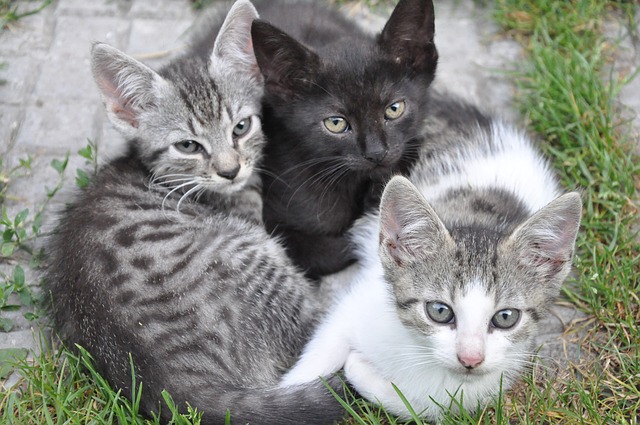 It’s springtime, which means kitten season is upon us. Shelters around the country will soon be inundated with box after box of kittens that need to be bottle fed or “tamed.” These kittens will come from under a person’s porch, a live trap set for skunks, and inside of culverts. If they’re brought to a shelter or behavior specialist who will take the time to work with feral kittens, their age is one of the best predictors for their success and turnaround time.

What makes a kitten “feral?”

Defining a feral adult cat can be quite challenging, especially when you are in a shelter environment where cats with a history of “loving everyone” may be shocked into the worst reaches of feline behavior, and cats that are found outdoors and brought to the shelter may be owned, stray, or feral.

Feral kittens, or cats under the age of about 1 year, are far easier to identify. Kittens that have been raised with human contact generally will be very outwardly friendly, purring, playing, and seeking out petting.

On the other hand, a kitten that has not been raised with human contact may hiss, spit, “popcorn” around the kennel with frantic leaps, and swat at fingers or food offerings. These kittens generally were born outside and have never been handled before by humans. For the purposes of this article, this kitten is “feral,” or unsocialized.

Cats, like dogs, go through a critical socialization period. The cat socialization period spans from about 2 weeks to 7 weeks of age. Studies show that just five minutes of handling per day by different people before the age of seven weeks can have lifelong benefits in the form of reduced stress with visitors and at the vet’s office.

While it’s helpful for the social and physical development of the kitten to remain with its mother until about 12 to 14 weeks of age, there is a balance to strike regarding feral kittens. Kittens that are first exposed to people and handling after the age of 14 weeks are much more difficult to socialize. It can feel like a “damned if you do, damned if you don’t” situation. Either you’re taking kittens from their mother and siblings early to ensure the best shot at socialization to humans, or you’re leaving kittens with their family at the risk of them never learning to live with people.

Many studies, including R. Collard’s article, point to about 45 days as the end of relatively easy socialization for kittens. However, that same study found that kittens handled between the ages of five and nine weeks of age “made affectionate or playful responses to persons.”

This highlights the importance of early socialization for kittens. Waiting until a kitten is old enough to leave its mother and venture into the world is too late for easy and effective socialization in most rescue, shelter, and foster situations. Trapping or capturing kittens as young as 5 or 6 weeks of age is ideal in terms of their potential to be socialized to humans.

At the shelter I used to work for, our ideal situation included a full litter of kittens coming into the shelter around 6 weeks of age. They get the benefit of continued cat-cat socialization from their siblings but are still young enough for relatively easy socialization to humans.

At the shelter, kittens as old as about 10 weeks of age usually “turned around” to become social kittens, albeit a bit nervous with sudden movements, with about two weeks of positive reinforcement–based target training and handling. After the age of about 12 weeks, the success rate drops. Some kittens became handleable and social, others did not. Around 16 weeks of age, feral kitten socialization success plummeted. The shelter generally does not even attempt to work with kittens older than this, instead adopting them out as “working cats” to local farms and breweries.

Kittens that are old enough to leave their mothers and explore are too old to be easily socialized. Community education on how, when, and why to bring feral kittens in to a rescue, shelter, or behavior specialist is imperative.

For those of you who like quick visual references, here’s one that we built based off of experience with thousands of feral kittens every year:

The role of genetics

While we cannot know what a feral kitten’s father was like, it’s important to remember that genetics plays a role. This is likely part of the explanation for why some seven-week-old kittens turn into biscuit-making purr machines in no time, while others continue to hiss and swat after a week or two of socialization.

If you are aware of feral kittens in the area, attempt to live trap them around five or six weeks of age. If you or a nearby shelter has the ability to take on a feral nursing mother, then go ahead and set the trap earlier and capture Mom as well. The mother cat can be spayed, given a checkup, and given an ear tip for free or very low cost at a number of mobile clinics in most cities.

If they are in your home, set the kittens up in a bathroom or large dog kennel, safe and tucked away from noise and other pets. If they are in a shelter, a large cat kennel with dark curtains is perfect for the family.

If the kittens are old enough to eat solids, start classical counter-conditioning to your presence immediately. If you appear to clean their area, offer some chicken-flavored baby food on a tongue depressor. Don’t force it, just be patient.

After several “drive-bys,” you can slowly start target training the kittens using a click stick. Build up to them touching your finger. Most kittens love baby food and catch on to this quickly. You then can start working on clicking and treating for allowing touches and petting. If you started working with the kittens at a young enough age, most will start purring and leaning into pets quite quickly.

Continue exposing the kittens to new objects that they can explore, as well as toys, music, and novel people. As with all socialization, avoid frightening the kittens.

Age is key when working with feral kittens, so act quickly without flooding the kittens or compromising their health and safety. Then you can use your clicker training and operant conditioning skills to teach the kittens how to interact with people.

Kayla Fratt owns Journey Dog Training, where she provides video-chat based behavioral support to dog and cat owners around the world. She also works as a freelance writer and web designer. She holds a degree in Organismal Biology and Ecology from Colorado College. She is currently driving from Denver to Patagonia with her border collie and boyfriend.