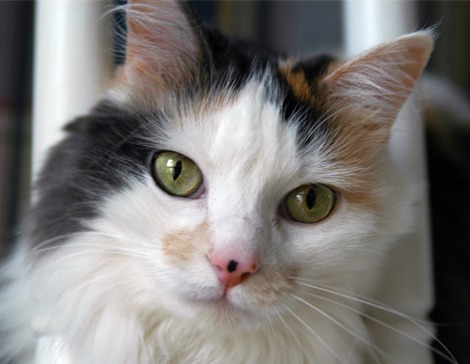 The joys of keeping our cats indoors with plenty of environmental enrichment, good food, health care and an enormous amount of love and respect are all well-documented: besides having a
happier and healthier companion, those fur-kids are living longer. Much longer. Indoor cats living over 20 years simply aren’t uncommon any more.

However, as with humans, our pets are also getting ills that can come with age, including neurological conditions. One such ailment is cognitive dysfunction syndrome (CDS), which is characterized by a set of changes in behavior that can be upsetting to see. Although CDS is well known in dogs, some vets feel that cats don’t get such a syndrome, that it is old age in itself.

The debate: does CDS exist in cats?

Dr. Ross Babcock, a veterinarian in Phoenix for over 48 years says, “I don’t see it in the exam room. Cats age. Their behavior changes, but it’s almost as though the behavior is a result of not having the ability to back things up.  There are clear syndromes in dogs, but we don’t see it in cats.”

Many vets and experienced behaviorists strongly disagree. “Few vets recognize cognitive dysfunction because of where the money is”. according to Beth Edelman, feline behaviorist for over 15 years and former cat columnist for the New York Post.  “They recognize it in dogs,” she goes on, “because a lot of health research is driven by the purebred world, and the dog fancy represents a much larger proportion of the dog world than the cat fanciers of the world do. Good studies do show altered behavior in older cats that differs from normal aging. Aimless wandering; night vocalizing and wakening;, irritability; aggression; disorientation—not normal with aging.  The difference is neuro-degenerative, and that’s nothing to do with old age.”

We know more about dog CDS than cat CDS, certainly. In an article for Psychology Today, canine cognition researcher Dr. Alexandra Horowitz wrote:  ‘In the last decade, the study of dog cognition has blossomed: there are now many research groups, in the U.S. and especially abroad, committed to testing the behavior of pet dogs… But research into “cat cognition” has lagged behind.’

Why might this be? Dr. Horowitz has the following suggestion:

“We feel that we already know what cats can do. Cats are padding along in some 30% of American households; they don’t feel exotic. There is no dearth of cat behavior books; every cat owner thinks himself an expert in the species’ behavior (and probably is reasonably expert at least at describing his own cat’s behavior). And among the things we ‘know’ about cats is another blow against their likelihood of being studied: cats are seen as ‘independent’ and unresponsive to owners. The impetus of the field of dog cognition rests largely on the dogs’ successes at ‘social cognitive’ tasks: those predicated on their being reliably responsive to and interactive with humans. Some physiological features of cats also handicap them as behavioral research subjects: their facial features are less flexuous, less expressive, than the dog with his protruding snout, wide mouth, and often enormous, mobile ears.”

Dr. Babcock has a simpler answer: “There’s no money in cats. Dogs are genetically closer to humans than cats are.”

This debate begs the questions: what is the difference between old age and real CDS in cats?  And, have those researchers and vets who are taking feline cognitive dysfunction seriously found ways to manage the condition? Are cats being managed as well as dogs with cognitive dysfunction?

To answer these questions, we first need to understand the difference between cognitive dysfunction syndrome and other degenerative neurological conditions in cats, like dementia. It’s easy to get confused.

Dementia is a progressive loss of cognition or mental faculties due to brain tissue damage. It’s associated with aging, but younger cats can get it due to other causes, such as head trauma. We know heredity plays a role, but we don’t completely understand the causes. In humans, Alzheimer’s disease is a type of dementia.

CDS is a kind of mental health disorder, involving degeneration and loss of nerve cells in the brain, resulting in behavioral changes.  Here too, age is the greatest risk factor, but it’s not the only one. Cats as young as eight (48, in human terms) can show symptoms.

If, as Dr. Danielle Gunn-Moore of the University of Edinburgh’s Royal School of Veterinary Studies, says, “Twenty-eight percent of pet cats aged 11to14 years develop at least one old age–related behavior problem and this increases to more than 50% for cats over 15,” then how do you know if Finchley is just getting older, or has CDS?

“It isn’t easy” admits Dr. Marc Schmidt, veterinarian in San Tan Valley, Arizona. “We make sure it’s diagnosis by exclusion—that it isn’t medical, that the cat’s behavior is out of character, such as staring off into space, getting confused.” Aren’t those also symptoms of old age? “Yes. In people, they have a more defined and refined way of judging, but in cats, we haven’t gotten that far. We can’t test our patients the way doctors can with people.”

That’s the bottom line: thus far, nobody can know for sure just what is wrong with your cat.  Dr. Scott Plummer, of the Veterinary Neurology Center in Arizona, is succinct: “Aging and feline cognitive dysfunction are impossible to differentiate at this time.”

The causes of CDS are also not fully understood, but several possible reasons are being explored. For example, the environment has been implicated. “Air pollution and excessive noise may predispose to…cognitive dysfunction, over time,” says veterinary nursing lecturer Julie Cory, of the College of Animal Welfare in Huntington, England. “Neuro-inflammation associated [with these things] can lead to oxidative damage and the development of amyloid plaque [the buildup of a kind of protein found in the CDS brain].”

Abnormal behavior that looks like CDS can have many causes, explains Dr. Alexander de Lahunta, emeritus professor of anatomy at Cornell College of Veterinary Medicine. Tissue inflammation, hyperthyroidism, kidney disease, tumors, trauma, or metabolic conditions can all be responsible. “If magnetic resonance imaging (MRI) and analysis of cerebrospinal fluid fail to reveal a physical problem in the brain, then the problem is something that is probably best treated by an animal behaviorist.”

“Diagnosis by exclusion,” meanwhile, is all we have to go on; what’s left may be CDS, or it may be just old age.

How can we identify the symptoms?

There are, however, symptoms that  pet parents and behaviorists can be on the lookout for. There’s also a context: a symptom or two may not be CDS but age; more than that should be checked out. For example:

There’s another symptom, which is harder to define. I’ve seen it in my 16-year-old, Grace. She’s somehow less focused, even a little faraway. She was never a “slow-blinker,” but now she looks away sooner than she used to.  It breaks my heart.

There’s no cure for CDS. Not for humans, not for other animals. But there are things we can do to slow its progress and to give cats with the condition a more comfortable life.

What can behaviorists and cat parents do?

Whether the symptoms a pet parent might see are caused by aging, dementia or CDS, lifestyle changes can give Finchley an easier life. Behaviorists, too, can help owners make a significant difference in their cat’s quality of life with some simple suggestions:

Make litterboxes as accessible as possible. That may mean placing more of them, and buying bigger ones with lower sides. They should be placed where he spends most of his time now.  If he forgets to go, periodically take him to the box. Nightlights are a good way to illuminate them.

Any changes in the household should be made slowly—change itself is hard to accept when a cat is at her best, but with CDS, it’s harder. Try to avoid making big changes like rearranging the furniture, which can be very confusing.

If there are changes in his sleep cycles, suggest keeping him awake as much as reasonable during the day, so he sleeps during the night.  A calm, regular everyday routine helps reinforce his sense of place and decreases that “lost” feeling.

No punishment! Don’t yell or use aversives. That shouldn’t happen anyway, of course, but remind everyone—including yourself—that Finchley can’t help it. The time you spend together should be loving and rewarding. That strengthens your bond and hugely improves his quality of life. He deserves that.

Veterinarians often suggest a change in diet: increasing essential fatty acids, keeping carbs down, and adding vitamin E. Research in humans and dogs has shown that diets enriched with antioxidants, as well, reduced amyloid production,and improved cognitive function. These benefits are presumed to carry over in cats.

However, increasing vitamins, potassium and manganese hasn’t been proven to help. Nor have gingko biloba or SAM-e. There is no firm data that indicates any supplements actively work.

What about medication? The following meds are often suggested:

Selegiline (l-deprenyl) is sometimes used in people with Parkinson’s and Alzheimer’s, as it can increase the concentration of dopamine, needed for cognitive processes. With dogs, success has been hard to monitor, and results are mixed.

Additionally, a veterinarian may prescribe an anti-anxiety drug, such as fluoxetine (Prozac), to ease some of the more alarming signs of cognitive dysfunction, but again, there is scant evidence it will be effective. “I have not had good success with this drug , and have not used it in cats,” says neurologist Plummer.

No drugs are specifically licensed in North America for the treatment of cognitive dysfunction in cats. Medications tried on cats have only been cleared for use in dogs.

So, the “skim milk” advice: use dietary supplements and increased environmental enrichment, and perhaps, just perhaps, we can keep feline cognitive dysfunction at bay. A little. Sounds good. Does it all slow the progression of CDS? We have no proof any of it does. There are, after all, no diagnostic tests. No brain mapping.

Last night I watched Grace, usually curled up with me, wander around the bedroom. This was new. Cats usually have a good saunter around to see what, if anything, has changed. But this was, indeed, aimless.  I lay there, with vision blurred, cheek wet, wondering if this was the beginning…

We owe it to our beloved pets to support them, for as long as we possibly can, for as long as our fur-kids have a decent quality of life, and knowing somehow, some day, when loving means to continue, or to let them go. (Oh, why isn’t there a damned tissue when you need one?)

Jane Ehrlich is a feline behaviorist with over 28 years’ experience working with cats. She lives in Phoenix with three rescue cats, and runs Cattitude Feline Behavior (CattitudeBehavior.com).