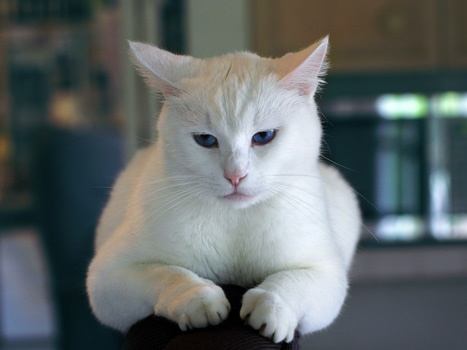 Over 10 years after the release of the Canine Behavioral Assessment and Research Questionnaire (CBARQ), cat owners finally have a feline version of this behavioral assessment tool available online. The Feline Behavioral Assessment and Research Questionnaire (FeBARQ) was a natural next step in companion animal behavioral research according to Dr. James Serpell, lead researcher on both projects. According to Dr. Serpell, the goal for this tool is to provide a method of studying behavior for animals living with humans in their homes. In the applied sense, this is meant to help professionals and pet owners better understand feline behavior, resulting in improved welfare for our feline companions and a better understanding of the development of behavior problems.

Contributing factors to differences in behavior

A study published recently in the Journal of Veterinary Behavior looked at the behavior of purebred cats using the FeBARQ. This study of 394 purebred cats of 12 breeds (Abyssinian, Bengal, Birman, Burmese, Devon Rex, Maine Coon, Norwegian Forest Cat, Oriental, Persian, Ragdoll, Siamese, and Tonkinese) included questions related to coat color, coat pattern, and eye color. Results suggest that each breed represented may have a “personality profile,” as associations were consistent among individuals of the breed—all Abyssinians scored similarly on the questionnaire, for example. When reviewing if coat color and pattern were correlated with behavior, it was found that, “most associations between appearance and behavior were attributable to breed.” This would indicate that using coat color and pattern as a basis for behavioral expectations for any individual cat creates unreliable and potentially unrealistic expectations. Behavioral expectations may be more accurate when based on breed, not coat color or pattern.

Dr. Serpell hopes that breeders will continue to contribute to the FeBARQ research by contributing answers to the questionnaires for the litters they breed, especially after they are placed in homes and they grow from kittens into cats. Dog breeders have used the CBARQ to discover if there are dogs in their line that have developed problems. The same potential exists for cat breeders.

But, what about the mixed-breed cats? Or the cats with unknown lineage? Since cats are bred either indiscriminately (the thousands of stray cats and kittens that find their way into homes and shelters worldwide) or bred based on form (not function), it is often unlikely that a specific “breed” is identifiable. As the database continues to grow, it may one day be possible to identify the breed that is most closely correlated with the behavior of a cat of unknown lineage. However, the FeBARQ will provide a sense of how your cat compares to other cats in the database.

Challenges exist with survey-based questionnaires like FeBARQ. Researchers must rely on the interpretation of behavior as observed by the human completing the online questionnaire. There is no independent observation of each cat’s behavior to verify the accuracy of the answers provided by the respondent. Additionally, many of the questions asked are retrospective and rely on the respondent’s memory of the cat’s behavior. Researchers must make the assumption that responses, such as when people report their cat is a purebred, are accurate. This could, for example, be a concern if owners are reporting that a colorpoint cat is a Siamese because the shelter where they adopted the cat identified it as such simply based on coat color and pattern. The silver lining to this challenge is that researchers are learning about how the respondents (humans) view their cat’s behavior and the effect on the relationship.

Another challenge, different from the CBARQ, is that while dogs generally live solely in the home (or at a minimum on the property), there is a large portion of cat behavior that is not observable for owners who have indoor/outdoor or outdoor-only cats. For these cats, the responses are based only on the behavior observed while the cats are in the home or while observed outdoors.

Dr. Serpell and his team continue to look at the data as it comes in to answer interesting questions. For example, do single-housed cats display fewer behavior problems? The team is looking at this now. Preliminary data suggests that single-housed cats don’t necessarily display fewer behavior problems. Based on the current FeBARQ database, it appears that they may actually display more mild behavior problems than cats living in a multi-cat environment. According to Dr. Serpell, the data indicates they display more owner-directed aggression, separation anxiety, compulsive behaviors, and nighttime activity. They are also more selective about elimination locations.

This would seem to indicate that cats are more social and more socially flexible than they are often given credit for by many—researchers and owners alike. However, the FeBARQ does not currently ask about the familial relationships between cats living together, so researchers are not able to identify if, or how, living with related or unrelated felines affects behavior. 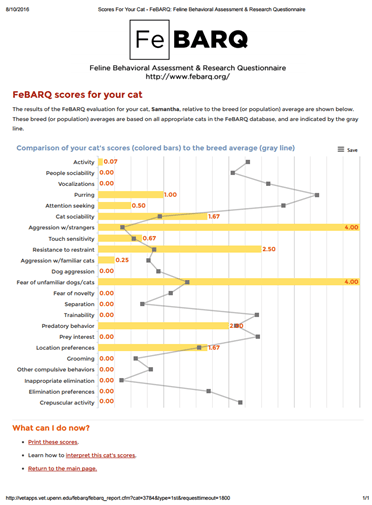 In regard to sociability, the role of avoidance behaviors commonly displayed by cats in social situations is unclear. Questions in the sociability section rely heavily on owner interpretation of feline behavior. For example, a cat that is friendly and sociable, but chooses to avoid or walk away from a situation rather than engage may be viewed by an owner as “uncomfortable” interacting with others. Also, due to the low response rate of owners who live with both dogs and cats, sociability toward dogs did not present as a separate subscale.

After completing all questions, respondents completing the questionnaire are provided with a graph showing where the cat scores in relation to all the other cats in that breed (mixed breeds are listed as domestic shorthair or longhair) for 23 separate categories. See the photo for an example of a result from one of my cats for whom I completed the questionnaire.

When asked about the value of this tool for feline behavior professionals, Dr. Serpell likened it to a CBC/chem panel for a veterinarian. As an initial screening tool, the FeBARQ can give professionals a snapshot of a cat’s behavior as perceived by the owner. The history of behavior and the context within which it occurs cannot be identified with this tool. Its usefulness is in providing feline behavior professionals a way to narrow down their approach when identifying the best way to address their client’s concerns about their cat’s behavior.

The FeBARQ is a valuable tool that will only improve in quality and reliability as more cat owners complete the survey. As feline behavior professionals we can directly affect how many cats are included in this groundbreaking research by encouraging our clients, colleagues, friends, family, and social media network to take the FeBARQ for all their cats Be on the lookout for more published studies about the analysis of the FeBARQ data in peer-reviewed journals in the near future!

Special thanks for Dr. James Serpell, Marie A. Moor Professor of Animal Ethics & Welfare and director of the Center for the Interaction of Animals & Society at the University of Pennsylvania for his time in answering questions for this article.

Miranda K. Workman, MS, CABC, CBCC-KA, CPDT-KSA is an educator and researcher at Canisius College with a background in animal behavior and anthrozoology. She lives in Buffalo, NY with her husband and several companion animals who remind her to laugh every day. You can learn more about here at her website.