Ethological Considerations in the Care of Companion Parrots 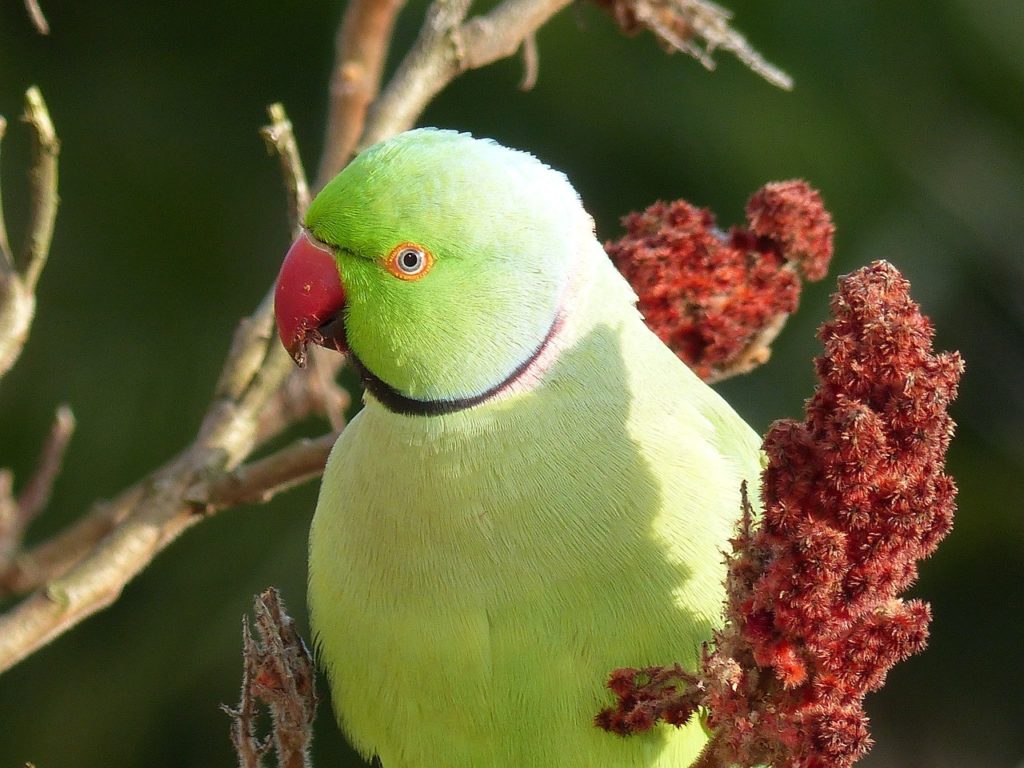 Parrots (Psittacines) are the most popular companion birds. However, most species are not domesticated, and they retain the behavioural traits seen in the species in the wild. Many conditions in which they are kept as pets are counter to the conditions to which they are adapted in the wild. Their ability to adapt to life as a companion bird varies considerably; some cope quite well, many do not. Those with a poor ability to adapt may exhibit a range of behavioural problems. Owners of these birds often find it difficult to address these behavioural issues and improve their birds’ lives. Where owners have some knowledge of learning theory and apply this when training and changing behaviours, this, with a better knowledge of the functions of their birds’ behavioural repertoire, can assist in improving the birds living conditions.

In this article, I’ll be sharing what I’ve learned as a parrot behaviour consultant about how the differences between the conditions that parrots are adapted to in the wild and how they are kept in homes can contribute to behaviour problems. Then I’ll offer some suggestions for helping parrot owners work with their birds.

Most wild parrots are naturally adapted to flying as a flock, and they can cover many kilometres every day of their lives as they forage. Parrots are vulnerable to predation, so flight is used for escape and to avoid other conflicts wherever possible.

As fundamentally social species, parrots make many decisions collectively, rather than in isolation. It is likely that the birds gain great individual security from constant interactions with other members of their species. Lone companion birds are denied these interactions with their own kind, and this may account for nervousness in them. It is known that precocial species of birds (those whose young are relatively mature and mobile as soon as they have hatched) show imprinting behaviours, but some altricial species—whose hatchlings are much less developed, immobile and helpless— including parrots, also appear to imprint.

Imprinting occurs before fledging, soon after the baby bird’s eyes open. Sexual imprinting may be less fixed in parrots than in precocial species, but the young birds rely heavily on parental care for their survival. Parrots “depend a great deal on learning and mentoring from their parents, just as humans do.” The larger species tend to stay with their parents for many weeks or months, after fledging.

Wild birds are of course subject to the effects of weather. Tropical species may experience torrential rain, often every day. Lowland tropical species rarely experience temperatures below 20 degrees Celcius for their entire lives, but many Australasian species experience a wide range of temperatures on a daily basis due to hot days and cold nights. Ultraviolet light from direct sunlight is available year-round, and this assists with the essential metabolism of vitamin D3 for calcium uptake. Most species experience near-equal amounts of daylight and darkness every 24 hours.

Conditions for indoor ‘pet’ birds are quite different. Neonates, destined for the pet trade are commonly raised using partial or total parental deprivation (birds are ‘hand-reared’ by the breeder). Birds raised by parental-deprivation commonly show courtship behaviours to humans; this can start while they are sub-adults. These baby birds may be prematurely weaned. In the U.K., breeders commonly sell African greys and Amazon parrots at 12 weeks old; while these birds may have fledged, they are not likely to be feeding themselves fully independently. In the U.K. it is an offence to sell any unweaned vertebrate as a pet animal.  Retailers tend to house smaller species in communal cages, but the medium and larger parrots are usually housed alone. Retailers say these larger birds sell more quickly if caged alone, so this reduces their costs. Again parrots are not adapted to such social isolation, particularly at such a young age. Such solitary confinement has implications for their welfare.

Many pet birds spend most of their time indoors in cages, alone, for the rest of their long lives. Many are flight-deprived by being wing-clipped or by confinement in too-small enclosures. The indoor climate is likely to be very dry, though warm in winters. They have no access to weather, so no direct sunlight, wind or rain for good feather conditioning. 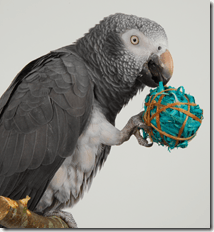 I believe that the conditions these animals are adapted to naturally, and those found as a ‘pet’ bird conflict with each other, and this is a cause of many behavioural problems. As Engebretson puts it, “The freedom to express normal behaviour and the freedom from distress appear to be inextricably linked in captive parrots and other birds kept as pets.”  Studies suggest that between 10 and 15 percent of captive parrots may suffer from feather-damaging behaviours.

However, where birds are provided with enrichment, they have fewer behavioural problems. Nomadic species including budgerigars, cockatiels, galahs and some Poicephalus species may show fewer neophobic behaviours than non-nomadic species such as grey parrots and may be better able to adapt to captivity. Those birds that fail to adapt to life as a pet may have a range of behavioural problems. The most common problems I am asked to help with are self-harming (feather-destructive behaviours, mutilation of flesh) aggression, making excessive noise, nervousness, neophobia, over-bonding to one person, and wing-clipping issues.

As highly social animals, parrots employ a great range of sounds for communication amongst themselves. I have noted 34 calls and postures for grey parrots and made attempts to interpret their functions so that I can help clients understand their birds. The birds use these sounds and postures to communicate reactions to events going on around them; to keep in contact with conspecifics; to warn the flock of predators, as courtship displays, greetings, threats, and as part of their play activities. There are only a few comprehensive studies of particular species’ repertoires, but Bond and Diamond explain many behaviours for Kea, as does Rowley for the Galah.

Parrots also communicate visually by raising and displaying their feathers in a range of different patterns and adopting various postures and actions. Most also have voluntary control of their iris diaphragm and can ‘flash’ their eyes when excited.

There are many aspects to changing a bird’s behaviour as part of improving its life. But these can be looked at in two broad areas. First, the bird’s general environmental living conditions; second, the nature of its relationship with its carers and their abilities to work with their bird.

Wild parrots spend many hours each day foraging; captive ones generally have food freely available at all times in their cages.  This latter situation is not one to which birds are adapted. Clients should be encouraged to allow their birds out of their cages for several hours every day, encouraging flight. Where foraging times can be increased, then birds are less prone to boredom. Like some other animals, parrots will spend time ‘working’ at gaining food, even where they have the choice of eating food that is freely available. They appear to have a real need to work at obtaining their daily food. Foraging toys made from paper, untreated wood, cardboard, or pine cones, for example, are ideal; birds enjoy tearing them apart to get at foods secreted within. Commercially-made puzzle toys can also be used. Some birds are wary of new toys so it can help to introduce these carefully, away from the cage, with the bird’s favourite person playing with the toys and rewarding the bird when it shows interest. Once the bird has played with new toys outside the cage, they can be placed inside, initially low down until the bird is seen to play with them.

I recommend roosting boxes for solitary birds. A roosting box is similar to a nest box, but with a larger entrance hole. It should be made from plywood and fitted high up in the cage, containing pieces of wood, cardboard, and paper for the bird to chew on. Many parrots will use these boxes during the day for snoozing, as well as at night for roosting. Birds tend to refrain from making loud noises while in their box, so this can help with noise reduction. Some birds may become more aggressive if offered a roosting box; if so, it may need to be removed.

Building the relationship between the bird and its carer(s)

Most clients will not be familiar with learning theory. Without this knowledge, behaviour modification is likely to be difficult. Apart from teaching a bird to step on and off the hand; most will have had no other training. I have found that training a few basic cues, in addition to stepping on and off the hand, develops better communication between a bird and its carers. These cues include: 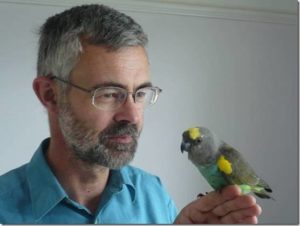 With these cues taught, it is much easier to have birds out of their cages for extended periods.

As intelligent, active social creatures, parrots need environmentally rich and stimulating conditions if they are to thrive as companion birds. Where these conditions provide the birds with opportunities to replicate their ‘wild’ behaviours, they should be able to adapt better to life in captivity. Furthermore, the birds’ carers can help their birds by employing behaviour modification techniques based on learning theory and understanding better the functions of their birds’ often subtle behavioural repertoire. Where the birds’ carers make good efforts to provide their birds with a more stimulating environment, and improve their relationship with the bird, they should see fewer behavioural problems. This should lead to parrots having better lives in captivity with fewer birds needing to be sold on or rehomed.

Greg Glendell BSc (Hons) works as a companion parrot behaviour consultant in the U.K., based in Somerset. He has written several books on bird care and training. He has worked on several bird welfare campaigns to improve the lives of these animals. Greg’s original interest was in wild birds where he carried out surveys for ornithological societies in the U.K.