The Use of a Startle Test to Determine the Differences Between Hot-Blooded and Cold-Blooded Equines – Is the Stereotype True? 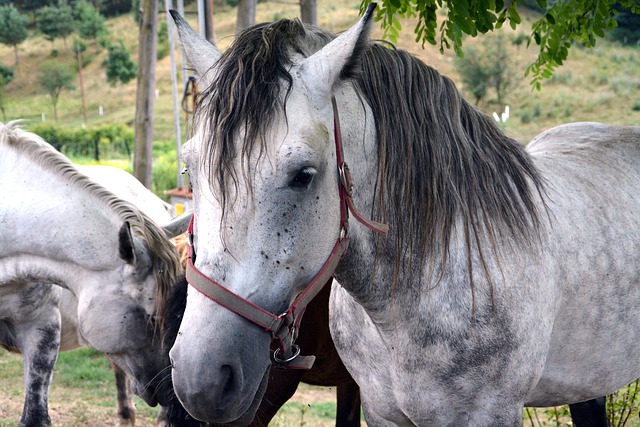 The performance of your horse is dependent upon both their physical capabilities and their temperament. Performance is optimised when the right match is found between the horse and rider. With 1.3 million regular riders in the U.K., understanding a horse’s temperament is becoming ever more important (British Horse Society, 2015). A staggering 66% of 3,000 non-racing horses were euthanized in France as a result of inappropriate behaviour (Warren-Smith and McGreevy, 2008). Thus, being able to test for temperament from an early stage is valuable, as it will mitigate behavioural problems that develop as a result of a poor fit between a horse’s temperament, environment, and the expectations of their owner, minimise wastage, and maximise welfare (Waran, 2007; Munsters et al., 2013; Dai et al., 2015; Pierard et al., 2017).

The horse is a prey animal and is naturally predisposed to have a flight response for survival when exposed to unexpected stimuli (Goodwin, 2010); the intensity with which the horse reacts can have detrimental effects on the safety of both the horse and rider during training and daily care. A decrease in this escape response improves manageability, consequently enabling successful training, and reducing the risk of any serious accidents and injuries (Christensen et al., 2010; Borstel et al., 2012).

In the United States there are on average 2,300 reports of horse-related injuries to humans annually, many of which occur as a result of unexpected fear reactions. Of these injured people, 48% suffered head injuries and 45% required surgical intervention (Lesimple et al., 2011; Dai et al., 2015). Despite the majority of horse owners recognising the importance of managing a horse’s fear reactions to minimize injury risk, there is currently a scarce amount of research identifying an objective method to quantify a horse’s temperament (Visser et al., 2001; Visser et al., 2002; Gorecka et al., 2007).

Past research has shown that the emotionality aspect of a horse’s temperament correlates with learning ability, thus corresponding with trainability, which can further be related to performance. Responses to temperament tests could be used to predict a horse’s future response towards a particular environment or activity, subsequently improving horse selection, breeding selection, and training (Scolan et al., 1997; Visser et al., 2003; Lloyd et al., 2007; Valenchon et al., 2013). Various authors have emphasized the need to incorporate temperament tests in horse selection and breeding programmes; however, research to validate a replicable test that is feasible in field conditions is still in progress despite public opinion showing a high demand for objective criteria to standardise temperament testing (Visser et al., 2010; Borstel et al., 2011; Gorecka-Bruzda et al., 2011; Graf et al., 2013).

Horse breeds are divided into two groups: hot- and cold-blooded. This distinction comes from their temperament and the types of tasks the breed was developed to accomplish. Hot-blooded horse breeds include Thoroughbreds and Arabs, bred for agility and speed. Cold bloods were bred for tasks like agricultural labour and include types such as cobs, shires, and draft breeds (Flanders, 2011). It is typically thought that hot bloods are more sensitive and reactive, thus making them more difficult to handle and less trainable.

The aim of my study was to identify whether equine type determines reactivity to a novel startle test and whether this reflects a precursor to certain temperament traits, which could effectively determine an appropriate lifestyle for each horse. In summary my objectives were to: 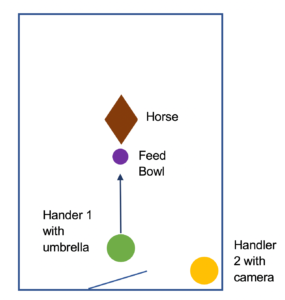 I used 26 clinically healthy horses from Writtle University College and Mashbury Hall Farm in Chelmsford ranging from 3 to 23 years old (Juvenile N = 9, Mature N = 17). Half the horses were hot-blooded, half were cold-blooded. I determined the groups using the prominent breed in the horse’s bloodline—a horse who is ¾ Thoroughbred, for example, was classed as a hot blood (HB). I decided to look at horses under the age of 5 separately, to eliminate the variables of age and training.

I placed a feed bowl with balancer pellets on the point of X in the testing space, an indoor ring, in order to keep the horses occupied and still. Twenty minutes before each trial, I attached an HR monitor to the horse’s girth area and took a baseline reading. The horses were then taken individually to the testing space, which was familiar to the horses, and performed the startle test: I placed each horse in front of the feed bowl as shown in the image below and released them, in order to remove the potential risks and allow a free reaction. I then proceeded to pop and hold the black umbrella directly in front of the horse from a distance of 2 meters.

The horses’ HR was continuously recorded, and their behaviour was captured on video by the second handler using an iPad. Once the HR returned to within a range of 20 bpm of the original baseline HR and the horses’ behaviour suggested that they had lost interest (or the horse touched the umbrella), the test was repeated. This was done three times for each horse.

Using a Polar Flowsync tool, I was able to determine what the HR was for each horse at the moment of startle, by chronologically correlating it with the video footage. The HR at each moment of startle, the difference between the baseline and maximum HR, and the average HR were noted. I reviewed the video and noted the behaviours associated with startling in an ethogram (see Table 1), then scored them on a Likert-type scale (Table 2).

For each of the three behaviours, I took a total from each startle for each horse to compare the severity of the different behaviours between the groups. I then took a total score from each startle from each horse to identify habituation. I also took an average behaviour score, calculated using the total of each individual behaviour from each horse divided by the number of behaviours measured. The time taken to approach the feed bucket was also scored according to minute intervals (i.e., if the horse returned within one minute they scored a one, and if they didn’t return until the fifth minute, they scored a five).

Table 1 – Ethogram of scored behaviour observed during the trial. 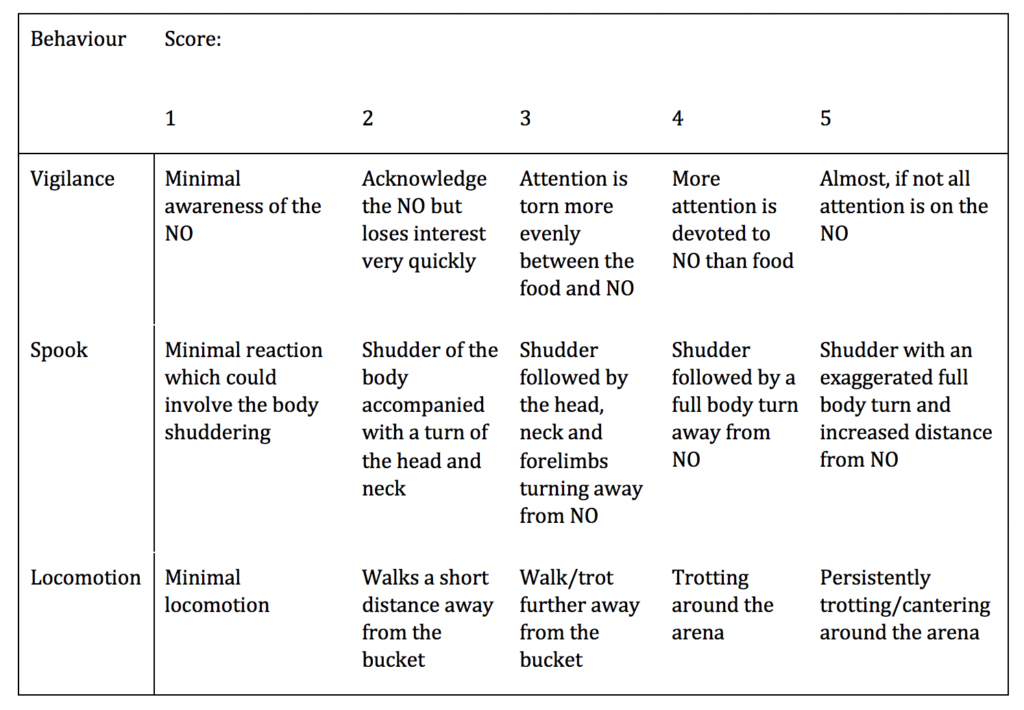 Table 2 – The scoring categories for each behaviour (NO=Novel Object, in this case an umbrella). 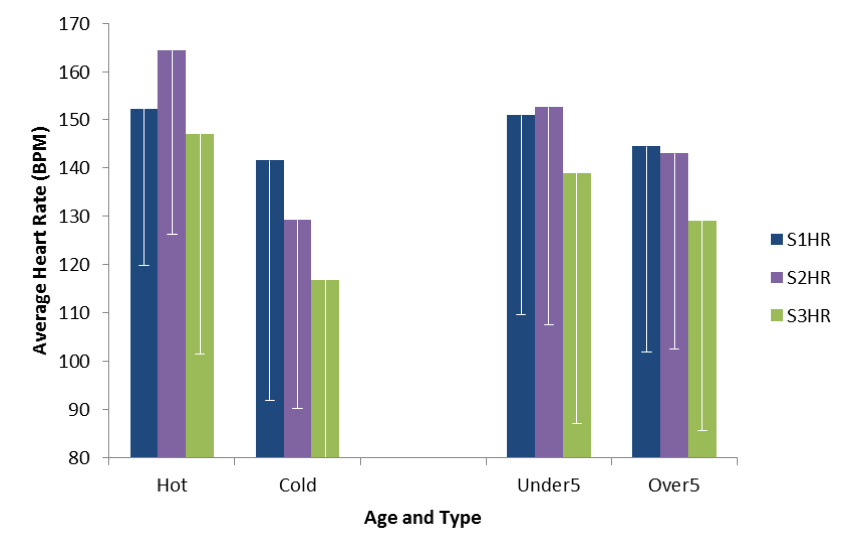 Average heart rate from startles 1, 2, and 3 for both types of equine and age groups. 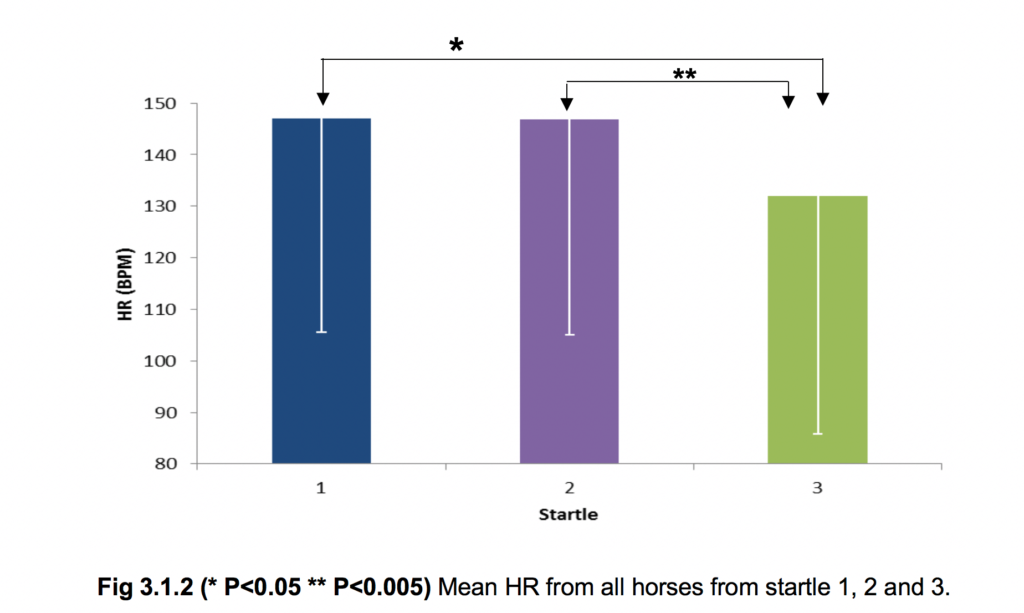 Furthermore, the average behaviour scores from all three startles revealed a significant difference in behaviour response between the hot bloods and cold bloods (P=0.019, f=0.591, df=24), but again no significant difference in the behaviour responses between the juvenile and mature horses (see the image below). Additionally, five horses presented snorting behaviours, and four of those did not return to the feed bucket, so they received the maximum score for time taken to approach the feed bucket. The remaining horses all successfully returned to the feed bucket, including six who went further to investigate the umbrella. Six horses also performed rolling behaviours, two before the test began and the remaining four after the test was completed. However, there was no significant difference in behaviour seen in the same horse throughout the startles. 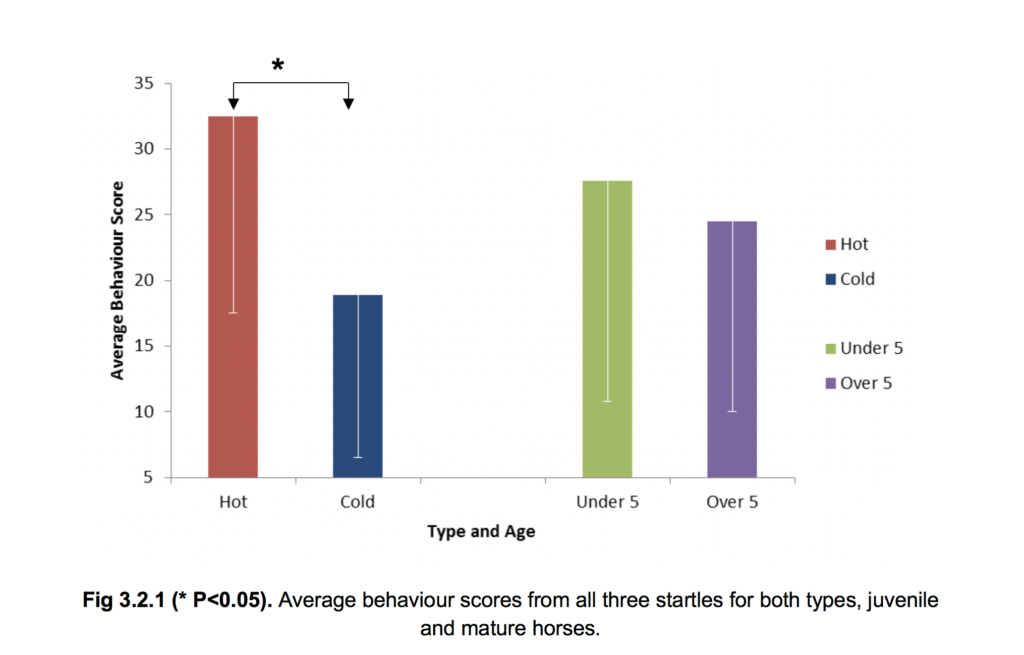 (* P<0.05). Average behaviour scores from all three startles for both types, juvenile and mature horses.

A Pearson’s correlation indicated there was a significantly positive correlation between the severity of spook and time taken to approach feed bucket (r=0.868, P=-.0005, N=26), suggesting those who showed a more severe initial spook also took the longest to calm down. 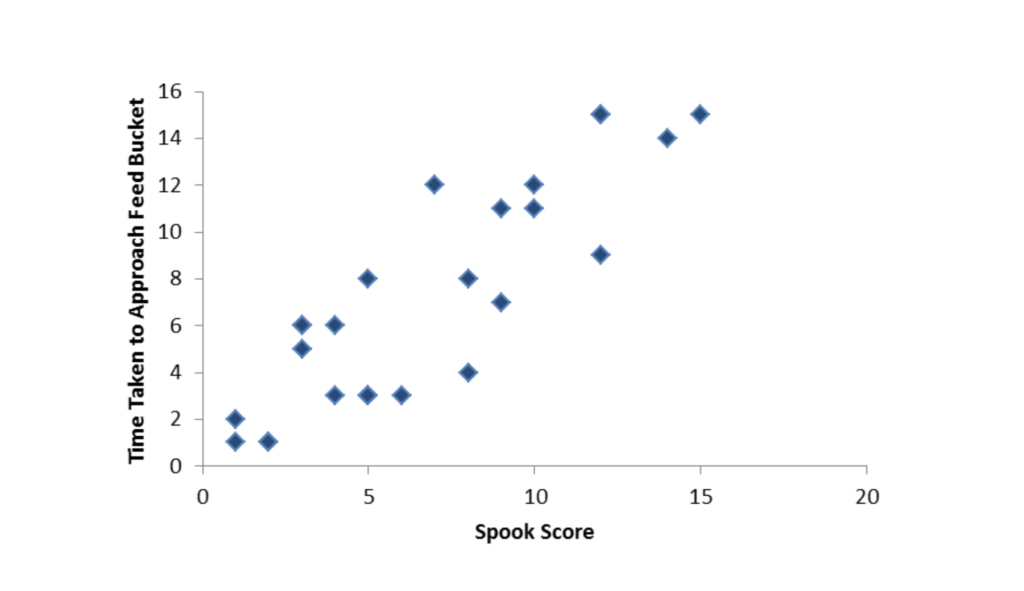 The correlation between spook behaviours and the time taken to return to the feed bucket.

What did the startle test reveal?

The startle test revealed differences between the two types of equine. Across all three startles, the hot bloods’ average behaviour score was significantly higher than the cold bloods’. Plus, the average HR significantly differed between the types in the second startle. As seen in Fig 3.1.1 the HRs did not differ much in the first startle, but that significant difference in the second startle reflects the cold bloods becoming less reactive and calming down much more quickly than the hot bloods. This is supported by the lack of significant difference in the spooking behaviour. Spooking is an innate response in a fight-or-flight prey animal. All of the subject horses exhibited it to different degrees.; it was the aftermath that differed between the types.

Even though there were no statistically significant differences in behaviour between the startles for each individual, there was a difference in HR, which was exaggerated between the different types. This was probably a result of the test only being repeated three times. It is highly likely more of a habituation response would have been seen if the test had included additional repetitions of the startle stimulus. However, the severity of the initial reaction to a novel stimulus is an effective precursor of how many training sessions will be required to habituate a horse to a fear-inducing stimulus. Christensen et al. (2010) found a strong correlation between HR from the first training session and the total number of sessions required to habituate horses to a white nylon bag.

Studies have shown that reactions to novel objects can be generalised to other stimuli, more specifically to their response to performing in unfamiliar, stressful conditions (Christensen et al., 2012).

Research has also suggested that more reactive and emotional individuals require more training sessions, as well as more sensitive training (Borstel et al., 2012). The behaviour responses of the hot blood horses suggest they were significantly more reactive, which is closely related to emotionality. Increased emotionality can interfere with learning (Lansade and Simon, 2010; Christensen et al., 2012)—highly fearful or emotional horses may not make the best eventers, for example, since novel situations are a common occurrence and high levels of concentration are required to come out on top. Visser et al. (2003) were able to successfully predict the quality of the show-jumping performance of a horse later in life by conducting temperament tests at a very young age, which excludes variables like training history.

Although my test confirmed the stereotypes about hot- and cold-blooded breeds, nevertheless these tests could put a stop to all horses of the same type being tarred with the same brush. Although differences were found between the different types of equines in my study, there was variation between individuals—some hot bloods did not react as strongly as others.

If a battery of tests, fine-tuned to be as effective as possible and including a startle test, were used to test different aspects of an individual horse’s personality, they could offer a real insight into whether that horse is going to be a good fit for the lifestyle and environment a buyer can provide them.

Implementing the results of these tests into breeding selection could help create lines that were suitable for what modern people want and use horses for—pleasure riding, equestrian sports, racing, and so on. This could further reduce the risk of failed horse-human partnerships, wastage, and injuries.

Further work needs to focus on fine-tuning these tests further, ensuring they are replicable and consistent.

Le Scolan, N., Hausberger, M., and Wolff, A., (1997). Stability over situations in temperamental traits of horses as revealed by experimental and scoring approaches. Behavioural Processes 41(3), pp.257-66.