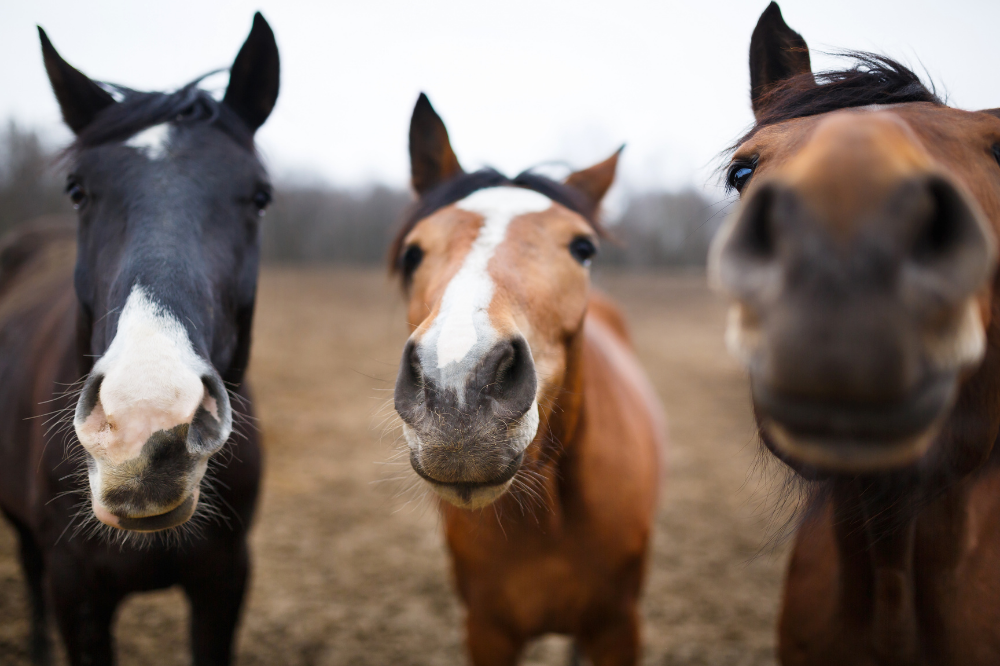 Summary: Horses suffer when they’re misunderstood, and seen as tools to meet human needs. These sensitive animals are subjected to pain and fear because the humans in their life have not developed a relationship with them based in understanding and compassion. This article asks, how can we be better advocates for the horses in our lives?

The riding section of the modern pentathlon at the 2020 Tokyo Olympics has made uncomfortable viewing for many of us who have observed horses showing very obvious signs of physical, emotional, and psychological discomfort and distress. These events have raised several fundamental questions regarding the equine-human relationship, which I believe need to be explored and discussed. Immediately following the competitions there was a volley of enquiry into equine welfare in sport that ranges from press reports of rogue horses devastating competitors’ chances of success, through to questioning the ethics of using equines for sport and entertainment. Ethical questions about the use of animals are fundamental in our continued re-evaluation of the human-animal relationship. Too often we become entrenched with beliefs that fix us to a position, one which, if challenged, may open a Pandora’s Box of difficult concepts that cause us to question our impact on the world and how we view ourselves and others. Tradition and culture strongly influence what we believe; if we wish to re-evaluate and change how we think, we can’t simply let go of old beliefs and leave a void. New ways of thinking must be accessible to sustain change. This applies to each of us on a personal level, and to the equine industry as a whole.

Thankfully, we are gaining more knowledge and a greater understanding of how nonhuman animals communicate with their conspecifics and with humans. The illuminating ethological studies of Carl Safina, Jonathan Balcombe, Marc Bekoff, and of course Jane Goodall amongst many others, make the worlds of nonhuman species accessible to a wider audience. You would imagine that it would be easy to identify and understand the behaviours shown by animals we live with. Afterall, we have lived with several domesticated species, including Equus caballus, for millennia. In fact, the first proven evidence of equine domestication was 6,000 years ago.

However, because the environments that horses live in today are often far removed from those of their ancestors, many of their behaviours have been adapted in ways that enable them to communicate and cope in the modern world. If we have any reasonable hope of more adequately understanding the behaviours of equines, we first need to study how they live and communicate together with minimal human intervention. A good place to start is the work of Lucy Rees, who has spent a lifetime studying the behaviours of horses in environments that allow them to live with minimal human intervention, and her evaluations of other similar ethological studies. 1Once we understand the development and presentation of equine behaviours in this context, we can then better interpret the behaviours of horses in captivity. However, it is essential to remember that animals of a particular species living in captivity may have different pressures and motivations than those of the same species in noncaptive environments – a lesson learnt from the misconceptions developed when observing behaviours in captive wolves.2

Fallacies associated with equine behaviour may well influence public perception. Anthropomorphism can cause misinterpretation of behaviours in order to maintain “objectivity” or assumptions that behaviour is triggered by human-type motivation. If we are to understand the horse for who they are, we need to understand why they behave as they do. The equine brain has evolved to discriminate between danger and safety; however, it works in a different way that the human brain in some respects, as you would expect. Throughout evolution, pressures within the environment have provoked changes in the brain and the associated structures. As horses developed in size and performed more complex social interactions, their brains have also increased in size and complexity. Information from the senses travels from the sense receptors directly to the motor control area in the brain’s cortex. The horse is hard-wired to connect perception directly to action, whereas the human brain generally sends information from the sense receptors to the prefrontal cortex for analysis and evaluation before deciding whether to pass the messages on to the motor cortex.3 The horse doesn’t possess the prefrontal area of the brain; however, other areas may produce some form of similar processing – at present we don’t know. Therefore, the horse reacts unconsciously to some stimuli. These are innate instincts such as running from perceived danger or shying away from an unknown scent. The horse’s sensitivity to the environment also extends to sensitivity within a group, both with social interaction and response to danger. Social living leads to improved wellbeing and protection from danger. Because the horse’s innate response is to distance themselves from danger, being isolated, restricted, or confined can significantly increase levels of stress.

With this in mind, taking a horse out of his familiar environment and asking him to build a relationship of trust raises ethical questions:

There are countless more questions to ask, but questioning how we regard the human-equine relationship will move us beyond a simple welfare paradigm.

‘The opposite of love is not hate; its opposite is indifference’

The above is a quote from Freud stated by Nobel Prize winner and concentration camp survivor Elie Wiesel. Indifference takes several forms but amounts to an individual’s choice, whatever their reasons, to not engage empathetically but to come from an apathetic or detached standpoint. Historical sociologist Norbert Elias suggested that rather than disengaging the mechanisms that prevent immoral actions, we start from a state of apathy and have to learn to morally engage.4 Countering indifference is complex. Taking a humanitarian stance extends beyond the human animal but, as we have seen with the recent events in Afghanistan, can cause polarization when humans place differing values on both human and nonhuman lives. Engaging compassion toward vulnerable individuals can take courage when encountering entrenched anthropocentric hierarchies.

The human relationship with equines has long been based on dominance and oppression. Early domestication saw the commodification of horses by elite pastoral nomads for their hostile migration from the Eurasian steppes as they invaded areas previously settled by farmers. The horses were used as vehicles of transportation and for food, with evidence that these encounters destroyed several largely egalitarian, women-centred communities. These invasions across continents decimated stable agriculture-based communities, culminating in domination, annihilation, enslavement, and the societal evolution of serfdom and class systems.5 The commodification of equines used for social domination has impacted human history perhaps more than any other human/nonhuman relationship, but the pattern of domination is also entrenched in the human relationship with the horse himself.

“…although animals can be thought of as individuals who react in a Foucauldian sense, when they are placed by humans in situations or environments where no reaction or response from them is possible, they are treated as things even though they…could have been treated as beings who react.”7

The horse has become an instrument of labour, a commodity. But we also see them as a friend, companion, teacher, soul mate, partner. The problem we present to ourselves today is how we can qualify the status of the horse when we have created a continuum that places him from slave to soul mate? At which point on that continuum would the horse choose to be should they be offered the choice?

The entanglement between horses and humans is complex and each relationship is probably unique. Some bonds are mutually beneficial with a deep understanding of each other’s needs and wishes. Here we see the human-equine relationship at its best; whatever the agenda, the health of the relationship is placed foremost. There is a recognition and regard for the horse’s agency and selfhood, an open communication that allows a give and take in the conversation. Nevertheless, there will be a status of power; we ask the horse to meet criteria that they may not have chosen prior to our asking. But choice is the key. In an open conversation we are able to listen to their needs and wishes, and offer guidance to enable them to understand with confidence and willingness – we are listening to their expressions of agency. If we accept that the horse holds the inherent qualities of sentience, autonomy, consciousness, self-awareness, and other-awareness, then they must be deserving of our respect and moral consideration for who they are as an individual. The horse possesses their own inner emotional and mental life, which encompasses different parameters to ours but many similarities. When we more fully understand how they interact in the world we can better empathise with their viewpoint.

“I saw deep in the eyes of the animals the human soul look out upon me.”8

Henry Salt was an advocate for animals at the turn of the 20th century. He recognised then the necessity to look deeper than physical embodiment if we are to truly understand the nature of nonhuman others. As humans, it is our role to learn more about the animals we ask questions of and to engender ways of working that are comfortable for them. Otherwise, we are using domination, however subtle it may seem to us.

To bring equine advocacy to the fore, we need to find the courage to evaluate ourselves and the compassion to accept what we discover. We are responsible for the wellbeing of the horse as individuals and collectively as an industry; with the story of the Star Thrower in mind, every time we advocate for an equine-centric ethos the ripples for advocacy swell.  Perhaps it is time to come together to discuss interdisciplinary action and raise the issues pertaining to equine welfare and beyond. The events surrounding the modern pentathlon have catalysed an urgent need to evaluate how we regard equines in an era when science has shown us similarities in emotional capacities between species, even to the realms of inter-species empathy. Despite updating the Five Domains,9 which goes significantly further than previous guidance in laying out a welfare model, there sadly seems to be a widening gap between such outcomes and actual practice. Implementing a change in welfare legislation and guidance goes part way toward improved wellbeing, but how can this become widespread when we are failing to recognise the fundamental floors. The welfare model rests in a “doing to” or instrumentalist paradigm, and skirts around an individual’s inherent autonomy and self. The adjustment from simple welfare to recognising agency in nonhuman animals offers a paradigm shift that encompasses regard for intrinsic selfhood. “Instead of treating animals as we think best, we might try to ask them what they want.”10

Through the love we have for our horses, perhaps now more than ever they need us to advocate for them. Whatever our goals, we each have an individual responsibility to learn the language of the horse if we are to understand their needs from their point of view. If we are lucky enough to work or be around horses, we know how sensitive and communicative they are; but do we always recognise signals of pain or distress, or whether the horse is adapting and coping successfully with our expectations of them? As individuals and as an industry, we can raise awareness on behalf of the horse to counter misinformation in the press and public perception. “Recognition of the other shifts focus from the treatment paradigm to a listening paradigm” (ibid). How we treat another is important; but listening with authenticity is essential if we are to action the change necessary to engender an ethics-centred human-equine relationship.