Environmental Enrichment for the Horse: The Need for Companionship 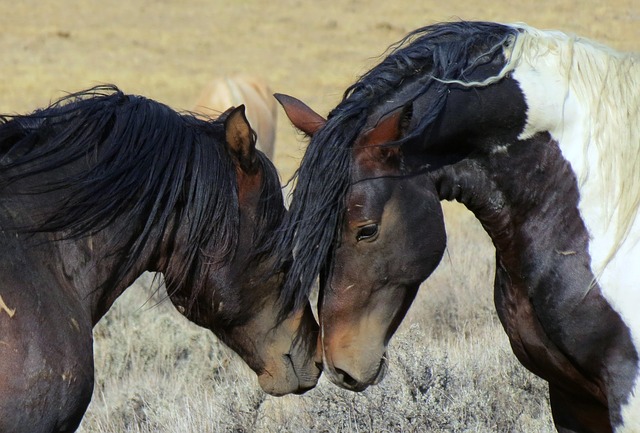 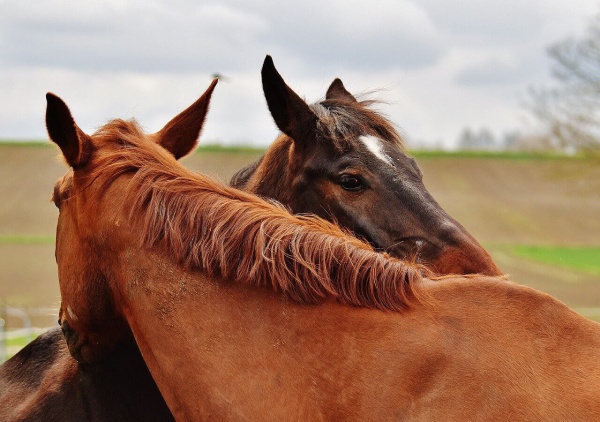 Horses are social animals regardless of whether they are wild or in a domesticated environment, and have adapted to live with others. Wild horses live in herds comprising of a number of mares, their offspring, and at least one adult male horse. Herd life is vital as a survival strategy and it provides much-needed companionship and security (Goodwin, 2010). Social behaviour is needed to help minimise conflict and enhance herd stability (van Dierendonck and Goodwin, 2005). The mares will often stay together regardless of whether the stallion leaves the herd, and the horses will commonly form pair bonds which can last a lifetime. Allogrooming—the act of one horse grooming another, also known as mutual grooming—is a common sight with pair-bonded horses but is also seen in non-pair-bonded horses. Allogrooming has been suggested to be an important social behaviour, as it builds social bonds and can even lower a horse’s heart rate (Feh and de Mazieres, 1993). Play is another behaviour which is commonly observed in herds, especially within juvenile horses, and helps to develop their social skills, physical motor skills and group cohesion.

It is commonly observed that once a colt or filly is 1 to 3 years of age they will leave the family herd to join another or even establish their own. In addition to this, colts and stallions may join a “bachelor band,” which is a herd consisting of up to 16 males (Landsberg, 2016). Social isolation is rarely seen in the wild, although old and infirm stallions have been seen to live alone on occasion (Overall, 2016).

The horse’s innate need for companionship

Compared to their free-range counterparts the behaviours observed in domesticated horses has been altered due to modern husbandry practices. Domesticated horses are housed in a variety of different systems which provide varying levels of social interaction and companionship. This can range from full interaction to no interaction at all, which some horses find frustrating and stressful.

It has been recognised that both long-term and short-term social isolation can impact horse welfare in a negative way; it is apparent that horses are highly motivated to seek social interaction (Søndergaard et al., 2011).

Confinement and social isolation, along with other management factors, may contribute to the development of stereotypies, including crib-biting, wind sucking, box walking, and weaving (McGreevy, 2012), which are rarely observed in the wild (Feh, 2005). However, it is important to mention here that an individual’s coping style will determine how they cope with stress. This means that a stressed horse will not always develop stereotypical behaviours in order to help them cope with a suboptimal environment (Ijichi et al., 2013).

This means it is vital that horse owners and yard managers keep the behavioural needs of the horse at the forefront of their minds, remembering that the behaviour of the horse has remained relatively unaltered by the domestication process (Christensen et al., 2002). Although it is difficult to mimic all of the natural and social interactions a horse would usually encounter in the wild, there are things we can do to provide natural enrichment. We can also make use of the available, albeit often limited, options for behavioural enrichment we have to work with, which can be used to help satisfy the social needs of the domesticated horse.

Benefits of keeping horses in groups

There is a large amount of evidence to justify claims about the benefits of keeping horses in groups, whether turned out or inside—for example, groups kept in a barn system. It has been found that eye temperature was significantly lower (which indicates a lower stress level) in horses which were group-housed compared to being housed without social contact, with limited social contact, and when pair housed (Yarnell et al., 2015). 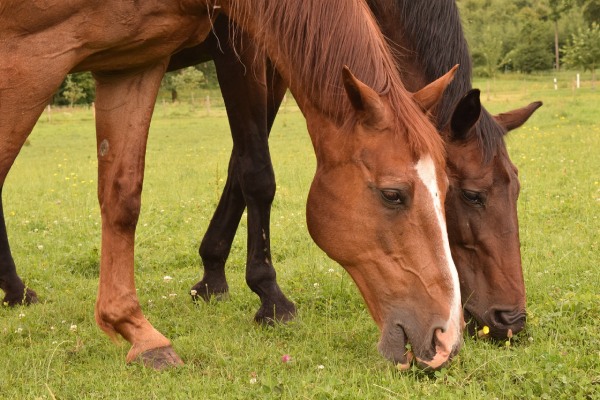 It has also been found that housing which allows visual contact between horses appears to reduce the risk of stereotypical behaviour (McGreevy et. al, 1995), and when both visual and tactile contact is increased, weaving and nodding behaviour is decreased compared to stabling with no contact with other horses (Cooper, et al., 2000). A study has also found that sudden social isolation causes stress in young horses which results in a high prevalence of stereotypical behaviour development (Visser et al., 2008). Erber et al. (2013) has also found that suddenly stabling horses individually when they were previously group housed, causes an increase in the concentration of cortisol (the hormone related to stress response).

Keeping horses in groups has advantages compared to keeping them individually, and this is especially true for juvenile horses. Juvenile horses are less aggressive and have more refined social skills if they are kept in group housing compared to individual housing where they are deprived of social contact (Christensen et al., 2002b).  This is reflected in their adulthood, during which they can have increased levels of aggression if they were deprived of social contact as juveniles, leading to less developed social skills. It has also been found that young horses adapt more easily to their initial training and show less unwanted behaviour if they are group housed compared to when housed individually (Søndergaard and Ladewig, 2004). Riding school horses have also been shown to have lower reactivity levels when they are group housed (Lesimple et al., 2001). Keeping horses within groups gives more opportunity for horses to play, which not only helps to improve social skills but also motor skills. This in turn helps develop the musculoskeletal system and enhances gastrointestinal health (Cameron et al., 2008; McGreevy, 2012).

How to talk to clients about group housing

It is evident that keeping horses within groups has positive impacts due to increasing social interaction, so why is group housing not more widely used? One possibility is that owners are concerned about the group dynamics and the risk of injury, for example their horse being kicked by another. Domestic herds at livery yards are often unstable, as herd members are regularly moved around, added, or replaced. This can cause disruption to the dynamics and social structure of the herd, which could consequently lead to an increased level of aggression, particularly if resources are limited (Yarnell, 2016; Christensen et al., 2011).

Nevertheless, the chances of serious injury are low: recent research suggests most new injuries after mixing horses into a herd are minor, and that sex and age do not affect injury level (Keeling et al., 2016). Another study looked into the behaviour of group housed horses during turnout and found that 80% of aggressive interactions were only threats, without any physical contact (Jørgensen et al., 2009). Steps can also be taken to decrease the potential for aggression and injury by giving horses more space—the Jørgensen study also found a higher number of aggressive encounters between horses when they were in the smallest space allowance.  In addition, turning a group of horses out into a larger area reduces stress during short turnout periods, which could in turn reduce the risk of injury (Suagee-Bedore et al., 2017).

Are there any alternative sources of social stimuli?

Interestingly, a study has concluded that weaving and head nodding decrease when a known weaving horse has an image of a horse’s head (with pricked ears) in their stable. Weaving is an abnormal, stereotypic behaviour in the horse and can be described as the horse swinging their head and neck in conjunction with swaying the body from side to side with the front legs (Binev, 2015). Horses with established weaving express the stereotypic behaviour significantly less when they have a mirror in their stable (Mills and Riezebos, 2005), and those horses that were established weavers reduced the frequency of weaving (McAfee et al., 2002).

However, whilst the image of a horse could potentially reduce weaving in the short term, it doesn’t mean that weaving is always reduced when horses are given social stimuli (whether visual, physical, or otherwise). The study found that weaving increased when yard activity was high and when the horses were anticipating a specific event, for example forage provision; this may suggest that weaving could be in response to frustration caused by the anticipation of an event rather than boredom (Mills and Davenport, 2002).

The horse’s innate need for social interaction and companionship is clear from the scientific literature, and there is ample evidence that both long- and short-term social isolation can impact horse welfare in a negative way.

Group housing is the best way to provide for a horse’s need for social companionship. Unfortunately, some modern-day horse husbandry systems do not accommodate the horse’s basic need for social interaction, and many horses lead an unnaturally solitary life.

If expression of normal social behaviour is restricted due to environmental factors, it can lead to stress and frustration, and consequently the development of stereotypies. It is therefore vital that horse owners and yard managers keep the behavioural needs of the horse at the forefront of their minds, remembering that the basic motivations and behaviour of the horse have remained relatively unaltered by the domestication process. This means that horses have a high motivation to express certain behaviours, such as socialising, whether wild or domesticated. There are steps which owners and yard managers can take, either through environmental or behavioural enrichment, to increase social opportunities and help to improve welfare, and these can be put in place with relatively little risk to horses or humans.

Mills, D.S. and Davenport, K., (2002). The effect of a neighbouring conspecific versus the use of a mirror for the control of stereotypic weaving behaviour in the stabled horse. Animal Science 74(1), pp.95-101.

Equine Behaviour and Training Association – How Do Horses Behave In Natural Herds? [online]

Louise Nicholls has an MSc in Equine Behaviour and Welfare and works within the British Horse Society’s Welfare Education Team as Welfare Education Coordinator. In this role she is responsible for writing advisory literature, writing articles on recent research and producing weekly social media posts to help educate horse owners on all aspects of welfare. Louise has a particular interest in equine behaviour and laminitis

Adapted from an article originally published by the British Horse Society.