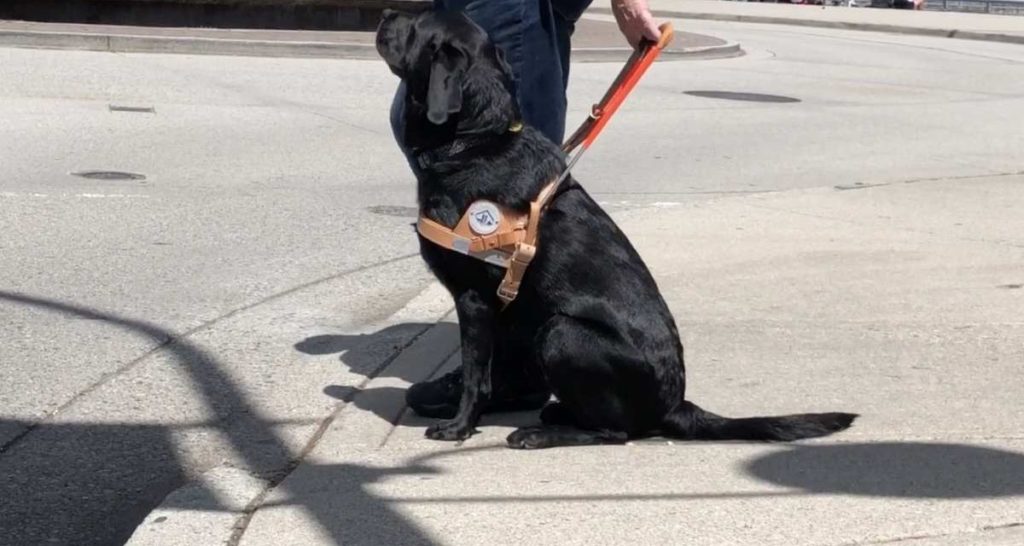 Navigating one’s daily tasks isn’t always easy — especially while living with a disability. Fortunately, there are service dogs that can be trained to do all sorts of tasks for their humans, and make significant improvements to their handlers’ lives. They might open doors, pick up fallen items, comfort an anxious person, or guide a blind person around obstacles.

Service dogs are not born with the needs of the handler already trained in, of course. These dogs need constant input to know what’s needed and expected of them, which is sometimes a difficult thing to do when a handler is distracted, tired, or otherwise unable to give the necessary instructions. Having the dog understand their environment and react appropriately to it therefore becomes a crucial, sometimes life-saving skill.

In order to encourage independent execution of desired behaviours, in service dog training it is important to emphasize environmental cues and reduce the reliance on verbal cues. Sometimes, through repetitions, dogs pick up on a certain pattern and they start offering the wanted behaviour without being verbally or physically cued, because they come to expect a certain cue in a certain context. Other times, the dog must be trained to respond to the environment rather than to instructions from their handler.

Here are a few examples of the types of substitutions to make for verbal cues:

In this video, Head Trainer of Vancouver Island Compassion Dogs, Mike Annan, is teaching a dog to apply body pressure to their handler’s lap when their legs begin to shake, which is often the case when people with a post-traumatic stress injury experience a lot of anxiety or stress. Feeling the dog’s head and the pressure on the leg can help the person experiencing the anxiety to calm down.

In this video, my co-worker Samantha Jagt demonstrates how her personal dog Lump has been taught to pick up the leash whenever it gets dropped. This can be useful for different types of service dogs. A person with a mobility device might not be able to bend down to pick the leash up. Alternatively, people with post-traumatic stress injuries tend to disassociate and sometimes drop the leash in such instances. Dogs at Vancouver Island Compassion Dogs are taught to pick up the leash when dropped in order to pull them out of this dissociative state.

My co-worker Samantha Jagt was so kind to teach this nuisance behaviour to her pet dog Lump. This is to demonstrate that it is not always beneficial to teach environmental cues. A dog that shuts the fridge door every time you open it would not be very useful. In this case a verbal cue like ‘shut the door’ under some good stimulus control would be preferable.

In this video Guide Dog Mobility Instructor Nick Toni of BC & Alberta Guide Dogs is working with a guide dog in training that has been taught to sit at every curb unprompted. Instructors have need to ensure that they do not accidentally cue the dogs by slowing down and or stopping before the dog does. Towards the end of guide dog training, trainers always do several blindfold walks to ensure they are not accidentally giving any physical cues. These blindfold walks are done with a second Instructor supervising to ensure safety.

Looking at this last example in more detail, teaching a dog to sit at a curb without being prompted —turning the curb itself into the cue for them to sit, for example — can be accomplished by setting up a training session where the handler repeatedly walks up to the curb and verbally cues a sit. After several repetitions, the handler stops cueing the dog to sit. Dogs are typically trying to take shortcuts, which can be used to the trainer’s advantage when trying to replace a known cue with a new one, whether those cues are verbal, physical, or environmental.

Because the dog previously has been cued to sit at the curb repeatedly, they typically assume that they will be cued to do so again and go into a sit all on their own. If this is heavily reinforced and the process repeated, the dog will soon no longer need a verbal cue to sit at the curb. Just like with other types of dog training, it is important to proof the newly learned behaviour by practicing in different environments and with many different types of curbs to ensure the dog truly responds by sitting at every curb. Of course, it does not always have to be a sitting behaviour at a curb. Depending on the situation, a stand might be more practical.

When trying to replace verbal cues with environmental cues, one must be careful not to accidentally replace the verbal cue with a body cue instead. Dogs generally respond better to body language cues than to verbal ones, and it is quite common that a trainer thinks the dog responds to the verbal cue when in fact they respond to a body language cue that was given unknowingly instead. In the example above where the dog gets taught to sit at the curb on their own, the dog may not actually respond to the curb as the cue but to the handler slowing down while approaching the curb. In the example of teaching a dog to pick up the dropped leash without being cued to do so, the trainer might accidentally be cueing the dog to pick up the leash by looking at it. It is always a good idea to ask another experienced trainer friend to observe your training session or videotape and review it yourself to ensure the dog is actually responding to the environment and not to certain body signals that are given accidentally.

It could be that the environmental stimulus is changing and therefore not apparent to the dog. If we take the example of curbs, they come in many shapes and forms and in very different surroundings. It makes sense to practice on the same or at least same type of curb at first, and then introduce different types along the way. It is best to start with a curb in a low-distraction environment with a curb that is high and easily noticeable before moving to more distracting environments and less obvious curbs. It is also advisable to not add two difficulty levels at the same time. Ideally handlers should work on one or the other before combining the two.

Rather than trying to transfer a verbal cue to an environmental one, it is often more efficient to train the environmental cue from the start. Using marker training the, dog’s behavior gets captured arriving at the curb. Once the dog has made the connection between arriving at the curb and getting a reward, the sit behaviour gets added in. Often times it is enough to just withhold the marker at the curb. Dogs with a big reinforcement history for sitting will probably sit in order to get a reward. If the dog does not offer the sit on their own, the handler may want to either cue or lure it a few times to get things rolling in the right direction.

While all these things can and should be trained, a dog with the right temperament for the job should also be a dog that is in tune with their handler. It’s very important to foster a strong bond between the client and the dog. If the bond is strong, the dog will pay more attention to their handler, and start reading them and the situation. They might start recognizing signs of anxiety in their handler and begin comforting them by cuddling up to them or nudging them, all without ever having to be taught to do so.

While it can be advantageous to have a dog respond to all sorts of environmental cues, it can also cause problems if a dog responds to environmental cues when we would rather they did not. If a dog picks up the leash when it falls, that’s great. But a dog that picks up everything that falls on the ground can quickly become a nuisance. It is important to properly proof the behaviours both ways to ensure service dogs in training are not performing tasks when they really should not. All handlers should really think things through before teaching a dog environmental cues.

Born and raised in Switzerland alongside two Tibetan Terriers and a menagerie of other pets, Matthias Lenz always dreamed of working with animals. His experiences traveling, working and living abroad eventually led him to Vancouver, Canada, where he started working with dogs. He is the current co-chair of the IAABC Working Animals Division, a Karen Pryor Academy Certified Training Partner, and certified professional dog walker. After several years training pet dogs, he transitioned into his work with service dogs. In his current role as Puppy Training Supervisor for BC & Alberta Guide Dogs, he is responsible for recruiting, training and instructing volunteer puppy raisers on how to raise, train and prepare service dog puppies for Guide-, Autism- and PTSD service dog work.