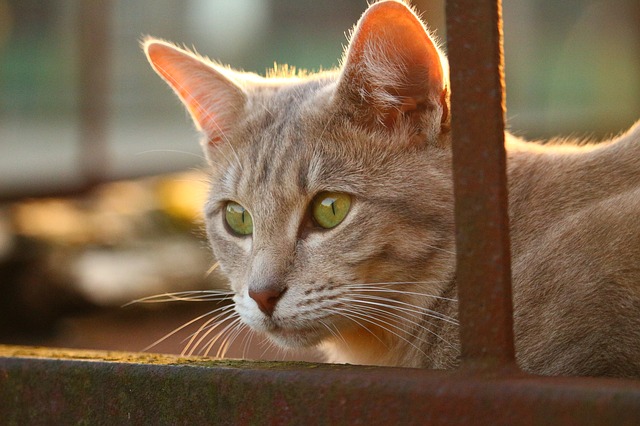 This video series shows the training of my cat, Spree, to willingly accept nail trims by using a previously learned behavior of “shaking hands.”

This is what our nail trims looked like prior to any behavior modification. As I approach, Spree is initially friendly and interested in petting. But once I start handling her paws, she continuously tries to pull her paw away from me. When that doesn’t work, she resorts to mouthing and then biting my hand, and she tries to bite the clippers once too. Spree also shakes her head twice, which is likely a displacement behavior because she is not comfortable with the interaction.

In our first training session, I start by asking Spree to do two previously trained behaviors: target and shake hands. I ask Spree to target the nail clippers to build a positive association with them since targeting is a simple and fun trick for her. Then I have her do several “shake hands” behaviors with her right paw. Next, I gently touch her toes on that paw after she offers it for a “shake.” To give her a hint that I’m going to be touching her in that way, I add the verbal cue “toe.” (It would be better if said “toe” about a half-second earlier so that it truly comes before—and therefore is predictive of—my action of touching her toe; often in this video I am saying it at the same time as touching the toe.)

After repeating this several times with her right paw, I do the same procedures with her left paw. Spree remains relaxed and engaged in training throughout the session. If she didn’t, I would back up to the last point at which she was successful, and then progress more slowly either in the same session or a later session, depending on how engaged she remained.

You might notice that she often lowers her head as I touch her toe. This could be in anticipation of the treat that will be placed in front of her on the chair, or perhaps she’s not 100% comfortable with me touching her toes. You will see that her head lowering becomes a bit of a problem during actual nail trims.

I complete the session by asking her to do a few more simple targets, just to end with something pleasant and easy for her.

I use a tongue click throughout so I don’t have to worry about also holding a clicker along with the nail trimmers (I typically use a tongue click with my animals anyway), and since she is very food-motivated, I just use her regular kibble as reinforcement. Note that some cats, especially those less food-motivated and those for whom these exercises are more challenging, may require higher-value reinforcers. Also note that Spree is stationed on a chair, which can make training sessions a bit easier as she is probably less likely to move away, although she does have the choice to leave if she wants to.

In this training session, we do some rounds of “shake hands,” add the toe touching, and then I actually touch her toes lightly with the nail clippers. You’ll notice that Spree continues to lower her head during most repetitions, especially when I bring in the nail clippers. I believe that she thinks I’m delivering her treat when I bring my other hand up, but instead it’s the clippers! You’ll also notice that, again, my timing with the cue “toe” is off. Instead of saying “toe” and then touching her toe, I’m saying it as I touch her toe, so it’s not the predictive cue I was going for.

An additional step I could have added to our training at this point would be to counter-condition her to the feeling of me extending her claws.

Spree comes happily running to sit on the toilet seat (which became her new station since the nail clippers are in the bathroom anyway and the lighting is good there) to get her nail trim. I give her a click and treat for stationing and then ask for a “shake hands” with a toe touch before using the clippers. As you can see, Spree still lowers her head quite often and now also incorporates head bunting, so sometimes it’s difficult to actually see and trim a nail! She does pull her paw away a couple of times during this session, too (once when I took too long to find the nail). When this happens we just try again. I will mix it up by sometimes just touching her toe without trimming the nail; this ensures that Spree remains engaged and happy to interact with me during nail trims. Occasionally, if she seems to be getting too aroused, I’ll just do a few nails and do another session later for the rest of them. My goal is that Spree is willingly offering me her paw, and I can trim a nail (or several) with her remaining relaxed and happy. I’ve since switched to a scissors-type cat nail clipper instead of the human nail clippers I had been using as I believe this makes trimming more comfortable for Spree. While we’re not always perfect, it’s a great improvement from pre-training nail trims!

Cheryl Kolus, DVM, KPA-CTP, is a veterinarian with a special interest in behavior. In her current position as Behavior Center Manager for the Fort Collins Cat Rescue and Spay/Neuter Clinic in Colorado, she not only directly helps shelter cats with behavioral challenges, but also pet owners in the community by providing in-home consultations and monthly pet behavior seminars.  From 2012-2014, Dr. Kolus was on the Executive Board of the American Veterinary Society of Animal Behavior, and she remains an active member.