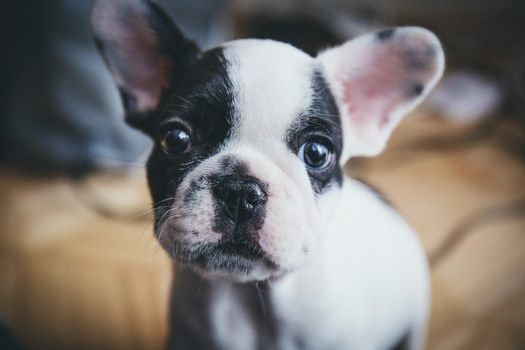 A dog barking and charging at the front door is by no means a new or unexplained phenomenon. Many of them do it with encouragement from their owners as “protectors,” and some breeds were specifically bred to be guard dogs. However, as a behavior consultant living in a densely populated urban setting, I find this is usually considered to be a problem behavior. It annoys neighbors when they walk down shared hallways or stairs; it makes mail carriers and food delivery people nervous, and it generally causes embarrassment when visitors come over.

Barking and charging at the door could be treated in a number of different ways. We could punish it using a stimulus that the dog found unpleasant; we could ignore it and hope it extinguishes, or we could reinforce an alternative behavior. As behavior consultants and trainers, it is up to us in any given situation to decide on the best possible solution for that client, that dog, and that situation—and the answer often varies.

For the majority of my clients, punishing the behavior is not a good solution. Adding a positive punisher, such as a pet corrector, citronella spray, a shock collar, or even verbal reprimands has the potential for side-effects that would make the dog wary of strangers entering the home. For most of my clients, this is not a side effect we can risk—there are simply too many people coming by the houses and apartments these dogs live in. If a dog were to develop a greater fear or distrust of strangers by connecting them with the punisher, we could end up with an escalation in the behavior that could lead to a bite.

In my experience, ignoring the behavior does not typically cause extinction to occur. Typically there are multiple reinforcers at play that are causing this behavior to continue. The owners paying attention to the barking frequently acts as a reinforcer, and even in the absence of owners, dogs will usually access negative reinforcement in the form of people (especially delivery people) leaving shortly after the barking begins. Conversely, if the dog is barking in greeting, occasionally the people will come in and visit. These both place the behavior on a highly variable reinforcement schedule, which is the enemy of a successful extinction procedure.

This typically leaves us with the third option: finding an alternative behavior to reinforce. In order to decide on an alternative behavior, it is important to define the problem behavior, its antecedents, and consequences. As with any situation, it is also important to understand the people, the dog, and the environment with which you are working. Using poor door manners as an example, we’ll take a look at a case study for Beskow. Beskow is a dog living in a family home in an urban environment. She is a medium-sized mixed-breed dog with a history of dog aggression, but no human-directed aggression. Here is the problem:

B: Beskow barks and charges the door.

For this behavior and this dog, there are multiple consequences in play and we don’t know for sure which one is maintaining the undesirable behaviors. However, all of those consequences could remain in place as long as there was a different behavior. My proposal was to replace the barking and charging behaviors with a “go to mat” behavior. The ABC sequence outlined above has two behaviors that are separate, but connected—barking and charging the door. When tackling a behavior problem, it’s important to address one behavior at a time. In this case, because the “go to mat” behavior was already well established with a verbal cue, and because the reinforcement would naturally include an “eating” behavior (which is generally incompatible with barking), I chose to directly tackle the charging behavior as our primary problem.

However, because the barking was so tightly linked to the charging and did not occur in its absence, and because the different distances Beskow would have to travel to the mat when she heard the doorbell made using a duration or latency measure difficult, I chose to use the barking as the independent variable to measure success. If Beskow were successful in going to the mat, it was unlikely she would bark; if she ignored her mat behavior and chose to charge the door, the barking would occur. This held true during the data collection process.

For the sake of simplifying the initial training, the only antecedent included was a “doorbell ring.” There was no person at the door, no door opening, and no greeting by the owner. The owner could activate the doorbell we used from inside the house at any time. During our training we were using a differential reinforcement of an alternate behavior (DRA) procedure: the only antecedent was the doorbell, and the only consequence was food.

Behavior Plan to Reduce Charging at the Door

With this behavior change protocol I usually recommend the use of a remote feeder like a Treat and Train or Pet Tutor. Remote feeders let you remove a potential reinforcer of the initial problem behavior—the owner’s attention—by removing the owner’s engagement with the dog, and make it easier to position the dog farther away from the door (even if the owner has to answer the door).

Here is the data and a discussion of what the chart shows:

I started by collecting baseline data. All sessions were doorbell rings when Beskow was on the first floor and was in a relaxed lying down position, and all training took place within a week time span. The doorbell rings were at relatively random intervals so as to more closely mimic normal activity. After six doorbell rings at random times, we introduced the Treat and Train and Beskow’s mat in the room adjacent to the front hall. This allowed her to see the door but was not compatible with charging it. I worked with her to train the cue of doorbell means “go to mat.” This was training, in that she could predict that I was holding treats and I worked on actively linking the doorbell with the “mat” cue. After several short sessions (such as a client would do in a trainer’s absence), I collected data on the training with the DRA procedure in place. During DRA sessions, Beskow was given approximately three seconds to lie down on the mat on her own and, if she did not do so, she was given an additional “mat” cue.

After seven sessions reinforcing Beskow for lying on the mat following the doorbell, I returned to baseline for three rings (giving no additional cue if she failed to lie down on the mat), and then returned to the intervention. During the three baseline rings, she would often look at the mat and then instead move toward the door and bark.

My criterion for giving Beskow the treat was not absolutely no barking, as I believe that would have been unfeasible initially without also altering the doorbell volume or changing Beskow’s distance from the door. Instead, I treated for the “go to mat” behavior and hoped the barking behavior would reduce in conjunction with it. If this had not occurred, I would have had to alter my approach for this dog and this scenario.

The final three sessions were probes. I waited longer than I had between other sessions—both prior to the first of these and in between them. I also did not re-cue the mat behavior if she did not lie down. In this case, she did lie down all three times and was reinforced for doing so.

The next step in this intervention would be to add people to the outside of the door—both strangers and friends. As trainers and behavior consultants it is always tempting to try and “clump” these antecedents and the behaviors that follow them together, to try to get results faster and (presumably) satisfy a client. That isn’t always a good thing. With a dog that was as entrenched at barking at the doorbell as Beskow was, heaping on the antecedents to her door barking and charging behavior would have been a recipe for inconsistent behavior change and client frustration. Simplifying what we were looking for allowed for very clear improvement, and has given Beskow a much higher chance of success when we up the ante with new antecedents in the future. The science is there, and if we can use it successfully to break these behaviors down we can use the information to more clearly implement these behavior change procedures.

Adria Karlsson is an applied behavior analyst and Certified Dog Behavior Consultant.  She works primarily with dogs but also with the occasional bonus cat through her company, Dog Willing, in Cambridge, Massachusetts. You can reach her via her website, www.dogwillingma.com, or by email, adria@dogwillingma.com.