Is “Dominance” a Four-Letter Word?

I had occasion today to think about how we working livestock guardian dog (LGD) owners view dominance in our dogs. Before we get into any further conversations about training, I think we should take a closer look at what dominance is and, perhaps more importantly, what it isn’t.

While it is seldom advisable to get all or even most of your handling or training advice from social media threads, they can come in handy when you want to learn about the different ways that people operate with their dogs. The other side of that, of course, is that it can be difficult for people who are truly struggling with their dogs to gain the perspective they need, due to the sheer distance of the advisor from the one seeking advice. If there is one thing I’ve learned very clearly, it’s that reports of behavior are not reliable enough to make firm decisions about their motivations.  In other words, when someone reports what their dog is doing or what they are doing with their dog, seasoned trainers know how to interpret some of what is said (or not said), but it’s a completely different matter to see the behavior in person. It’s also true that some people will always see a behavior problem as a nail because all they have to address it is a hammer, and that others are looking through a lens of preconceived ethical or moral views on dogs, no matter how impractical or inappropriate that lens may be for the situation at hand. 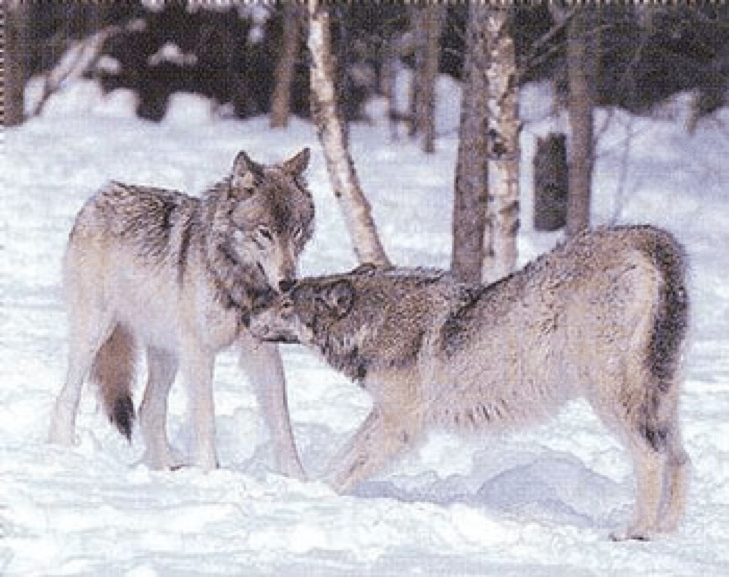 What I want to talk about in this article specifically, however, is how much a consideration of dominance should factor into the decisions we make regarding our working LGDs, not to debate whether dominance exists (yes, it does) or even whether we should acknowledge it (yes, we should, since it can be exacerbated or misinterpreted,  leading to serious complications). I am asking that we go forward in this article with the understanding that dominance exists, plain and simple.

What is dominance?  Many people throw out the word “alpha” or refer to Cesar Milan’s techniques when asked this question. They talk about “alpha rolling” or “body rolling,” using physical intimidation routinely and never allowing your dog to be above you in stature, never allowing him to put his mouth on you—essentially encouraging a laundry list of forceful methods routinely aimed to ensure that the dog never gains the “upper hand” in the relationship. I don’t know about you, but I cannot imagine that type of approach garnering anything other than mistrust in both humans and dogs, given how complex and nuanced our collective social behavior is. Approaching dogs in this way is akin to overemphasis on one conversation, on one subject in relationship. Imagine if you wanted to tell someone that you love them, or that you’re hungry—or even that you have to go to the bathroom—and all they ever said in return was “Get in line, don’t be dominant with me!” Imagine if you wanted to play or communicate that you are insecure about a situation, but all you were continually told was “Stop trying to control me!” Not only would it be confusing and frustrating for you, but you’d most likely tune out as you quickly learned that no one was listening to you in this particular relationship. Furthermore, if they continually insisted that you grovel before them, or tolerate harsh handling, you may even find yourself lashing out or shutting down completely. Security and safety in this relationship would feel almost nonexistent, and it could be argued that the relationship was abusive or, at minimum, neglectful. If we don’t have a working understanding of the role that dominance plays in our relationships, of how it can be used properly and fairly (as we seem to understand instinctively with our fellow humans, for instance), we will continue to misapply and misinterpret it, or just refuse to have the conversation at all.

Living together demands a passable skill for appropriate social language. This is why, most often, in the wild, like animals live with like. They understand how to communicate with each other, and it allows them to live peacefully enough together to ensure their survival. It’s how we came to live with canids in the first place—we were able to communicate well enough to come together for mutual benefit. Had we had dominance as an overriding concern, or if they’d had that as their only concern, we would not currently have hundreds of years of beneficial relationship behind us now. It’s that simple. The animals most concerned about interspecies dominance live mainly alone (apart from offspring at times); they lead much more isolated lives.

Dogs are, for the most part, very socially flexible. We humans generally are as well. We, dogs and humans, adapt well to varying groupings, despite our personal proclivities. Animals with strict dominance hierarchies do this less well—birds are often put forth as good examples of beings that live best with such a rigid construct. They have been the focus of a lot of the research on the subject of dominance for this reason. Their social default is to have the conversation to determine who is in charge first and often. They do not tolerate weakness, nor do they tolerate usurpers. There are those who are submissive and stick to that, and there are others who constantly challenge for control, or who are quick to sense an opportunity and take it. Birds generally live in a “cutthroat” world with a solid ladder of control. This is not to say that they can’t live peaceably, but they are generally less adaptable to change. The level of aggression displayed and the ability to be “tough” are more informative of eventual status than the body mass or size of the bird. In other words, it’s the size of the fight in the bird as opposed to the size of the bird in the fight that determines which rung on the ladder they will occupy.

Dogs, in general, are much more willing to give and take than birds—many dogs routinely offer submission to any human they meet. We have selected for this trait in many of our companion dogs, and indeed in many of the dogs we work with as well. Selection for routine submission with their handlers is commonplace. The much-maligned pit bull is a good example of this: historically selected to be aggressive with other dogs but never with their people. Simply put, this was for a practical reason: In order to pull an aggressive dog out of a fight or to train a dog selected for willingness to trip into aggression, you’d have to ensure they felt that hurting humans was forbidden. Other dog breeds have been selected similarly, such as the herding types or even more dramatically, the gun dogs. There are breeds of LGD, such as the Armenian Gampr, that have been selected similarly; they are quite soft with people while simultaneously extremely fierce with wild apex predators.

Essentially, over the course of our history living and working with most dogs, we’ve purposefully or otherwise selected against a willingness or desire to challenge our status as leader. We found that, since we as humans have the longer view and hold the construct of what we want to accomplish, it makes much more sense to have dogs that easily agree to work with us, no matter what we ask. While this has been done with LGDs to varying extent (the more stranger-friendly types to a greater extent than the others), I do not believe that LGDs operate in the same way that most dogs do. They are not complete outliers (they share this niche with the most serious protection and spitz dogs, for instance), but as we’ve discussed before, they do fill a unique working role and have had their maternal and aggressive tendencies exaggerated in order to be successful at it. This leads them to behave more like a primitive social canid, thriving in familial groupings, as well as with a more rigid social hierarchy than most. It is often noted that the working LGD learns best by watching and doing, is sensitive to subtle nuanced body communication, and is quite often ahead of other dogs or even humans in terms of predicting what is going to happen next in an interaction.  All of this lends itself to a highly sensitive dog that needs a solid relational foundation to operate from. 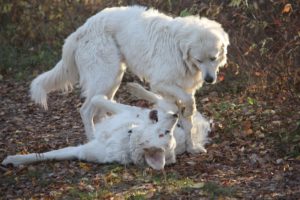 It is my firm belief that not only are LGDs concrete thinkers in general (like many herding dogs), but they also appreciate knowing where they stand in relationship at all times. Uncertainty does not lend itself to security. You’ll seldom see two working LGDs meet without establishing right away who is the leader and the follower (dominant and submissive). This doesn’t always play out in the same way with humans, but the conversation is very similar. Knowing who is in charge doesn’t need to be, and often isn’t, the result of a physical altercation, but it needs to be established just the same. It may have to be revisited as dynamics of the relationship change (a maturing pup with an older same-sex mentor, for instance), but once established it remains static and doesn’t need to be proven over and over in every interaction. Our LGDs are less interested in challenging the leadership position with us humans than they are with their canine counterparts, but they are absolutely hard wired to step into the gap if they find that we aren’t willing or able to lead. If we are unconfident, unreliable, distant, or otherwise irrelevant and untrustworthy, they will step into the void. They will also do so if we are under threat or incapacitated, something we generally find to be a positive trait.

Working LGDs are warriors. They go forward into battle when other dogs would run and hide. They do the opposite of what comes naturally to most animals; they give up self-preservation to put themselves in harm’s way for the benefit of others. There is little time for ongoing negotiation when you’re in protection mode 24 hours a day, 365 days a year. This is one of the reasons why working LGDs always need to know where they stand, who they can trust, and who will have their back, and equally who they are expected to provide backup for. Regardless of which training methods are chosen, earning the trust of your working LGD and ensuring that they are comfortable in their social interactions with both humans and each other ought to be highest on your list of priorities.  A confident and secure dog does the best work, and in the end, we can agree that we all need dogs that work to the best of their abilities.  The lives of their charges depend on it.

Carolee Penner is the author of Guard Dog Blog, where she writes about Livestock Guardian Dogs and small farm life and the owner of Off Leash – Canine Behavior Solutions, where she works with trainers and owners to help them understand their challenging dogs. She has extensive experience working with LGDs of different kinds and in different life stages. Carolee lives with her children and partner, Jen, on their small farm in northern Alberta, along with their sheep, pigs, goats and working LGDs.