A few years ago, I had the privilege of attending a weeklong workshop at Natural Encounters, Inc. in Florida. I signed up for it on the advice of and endorsement by several other trainers and was thrilled at the prospect of spending several days in Florida with like-minded trainers learning about not just a new species, but a whole new class of animals. I had trained dogs, cats, and humans, but never a bird. I felt a mix of trepidation and confidence. I knew my behavioral science, I knew how to lure, capture, reinforce, and ignore behaviors. How much harder could it be with a bird? How different could bird training really be? But at the same time, I had a baseline fear of humiliating myself in front of my fellow trainers when it turned out that parrots were exactly as different as I feared. I think I was right on both accounts.

On the first day of training, Steve Martin walked us through the basics of macaw training and pointed out some best practices to help us avoid getting bitten or frightening the birds. Our first training tasks were to practice step-ups, work on our timing with the verbal bridge “good” followed by a food treat, and get comfortable working around the birds. This seemed doable. I filled up my treat pouch and followed my group to our training aviary. I was paired with a handsome scarlet macaw named Romanoff.

He was happy to take treats from me, and we managed a few step-ups. As we grew more comfortable, our group of four were shown how to call the birds to us to land on our hands and collect treats there. This was when I learned I have a strong startle response to flapping bird wings. After ducking or moving too quickly the first few times, I managed to control my response and hold still for my patient avian partner. We practiced having him fly to me and back to his perch a few more times and then took a break.

Despite the fairly short list of behaviors I had practiced as a new bird trainer, I had already learned so much. I had gotten used to using a verbal marker (being a mostly clicker-based trainer with my mammal pets and clients), I had learned how to deliver a seed or peanut to a parrot without getting bitten, and I had learned how to angle my hand to offer a good perch to land on. I’d also discovered that birds take a lot longer to chew than dogs, or even cats. The response rate of the behaviors was much slower than I was used to, and I needed to give Romanoff ample time to chew between one response and the next cue. Lastly, I’d learned that my parrot vastly preferred peanuts to feed, but also that we need to weigh them at the beginning and end of each day, because they could pack on weight quickly with training. And with birds, that weight is measured in grams, not pounds.

That afternoon, after teaching our birds to turn around on cue, we were issued our challenge for the next four days. Choose one behavior to teach our birds and be ready to demo it during the final training session. That didn’t seem too complicated, right? I recognized my own inexperience and was learning to appreciate the macaws’ training pace at this point, so I picked what I figured would be a fairly straightforward behavior, but one that looked flashy and appealed to me: I wanted Romanoff to learn to spread his wings wide on cue.

Things that immediately struck me as I reflected on my choice later that evening:

But I decided that I was at the training to take risks and learn, and what better way to really challenge myself than with a behavior that by its very anatomy was brand new to me. 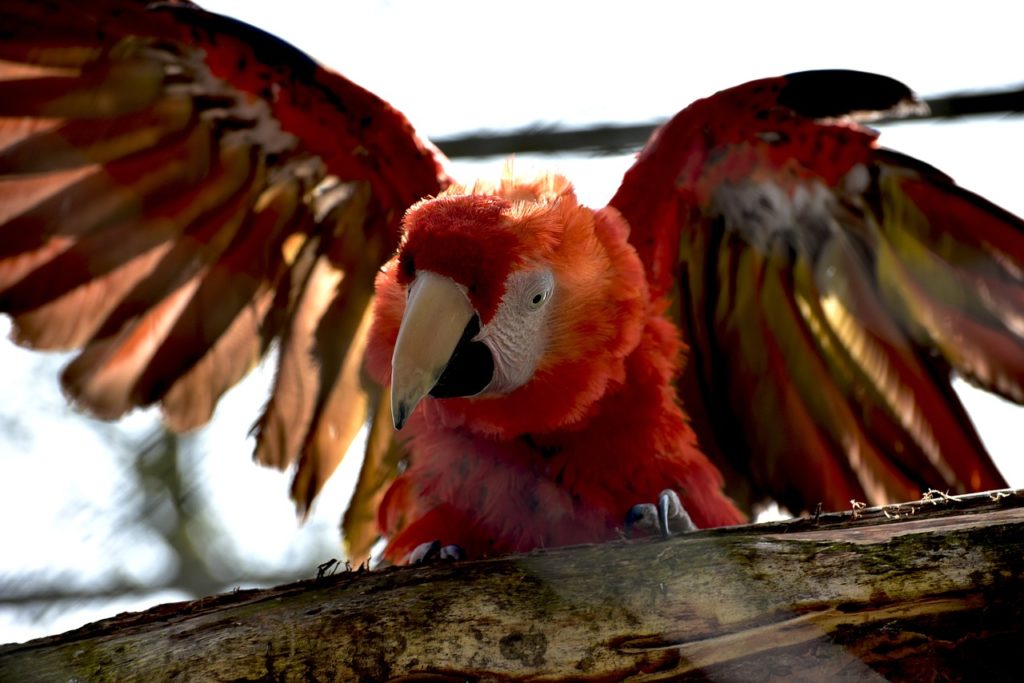 I think I was hoping for something like this….

The next day I asked our mentor trainer for help and guidance with this. He said there were several different ways to get a bird to stretch their wings out and be able to capture it. One of the ways was to teach them to target a stick and then have them reach for it. When they reached, they tended to unbalance and move their wings to catch themselves. That sounded good to me: I had trained innumerable dogs and cats to nose touch target sticks, so this seemed familiar and accessible. That was my first mistake. After ten minutes of half-hearted engagement, Romanoff gave up on me completely and left the scene. He was having none of it. I consulted my mentor. He pointed out that I had been holding the stick up — where it needed to be to lure the end behavior — and suggested that many birds just don’t like having sticks held above them like that. I felt like an idiot. Of course brandishing a stick at a bird was a dumb idea. I should have started by having him reach down or to the side, or at least straight forward, but by the time I tried holding it in different places Romanoff had already written off the stick as a Bad Idea. That was the day I learned that prey animals can be much less trusting than my typical carnivore trainees, and reflected again on just how different a different species can be. With a dog or cat, I think I would have recognized the animal’s discomfort sooner and been able to salvage the training. With a macaw, it took until he had totally given up on me before I realized how wrong I was. Body language is an important piece of being an expert in a species.

That morning session ended up being a big waste of time, except for what it taught me about not doing. In the afternoon, I approached fresh and ditched the stick. My mentor teacher suggested just going straight to a food lure in my hand. I gave Romanoff a couple and gradually ask him to reach a little farther to get them. Doing this achieved the same end behavior of him becoming slightly unbalanced and opening his wings to stay upright and get the food. It felt less slick as a professional to be using a straightforward food lure, but it also worked. The first time he reached and fluffed out his wings, I caught it with the “good” marker and couldn’t have felt prouder. Having found a lure that worked, the training session passed quickly with Romanoff figuring out what I was looking for and me getting excited for the slightly wider wing spreads. We left off with a noticeable fluff when my hand came up, but with the food lure still needed.

The next day, I approached much more confidently. Having worked with Romanoff for a couple of days, I was feeling better about reading his body language, understanding his pacing, and knowing what he wanted for reinforcement. This meant that the piece I understood — the actual training and behavior — was now really beginning to eclipse my deficits, and we were seeing some success! The two sessions went smoothly and we got all the way to a full wingspan spread by the end of that day. That meant that all we had left was to add a visual cue and fade the lure. I had started on that a little, but the food lure was still a major part of our success.

The final day dawned, and I knew that by the afternoon the behavior was supposed to be demonstration ready. Obviously, we were all there to learn, so if I still needed a food lure, no one would really be critical except me, but I really wanted to feel that success. The morning session consisted of lots of (still slow) reps of hand cue → delay → food lure → behavior → reinforcement. It took a few tries, but it worked! Just a few reps in, Romanoff responded to the hand cue! I was giddy! I had trained a bird! And, like the good macaw he was, Romanoff did me a solid and performed on cue in the afternoon in front of the other participants and mentors. I was so proud. It was really cool to see what other people had trained their birds to do that week, too. It was amazing to see what people with actual experience had accomplished. Given the same amount of time that I had had, they had their birds collecting and delivering rings, playing basketball by dropping balls through hoops, and flying to targets on cue. It was truly impressive.

My takeaways from the week mirrored, I think, the feelings I had going in. I was thrilled to experience first-hand how applied behavior analysis concepts transferred so easily and clearly to a brand new species and type of animal. While I never doubted the science, seeing that transfer first-hand, and getting to use the science in training a new-to-me species, was an intellectual and emotional high for me as a trainer. I was also humbled by the seemingly simple logistics, body language knowledge, and manual skills that I lacked when working with a new animal. It reinforced for me the reason that an organization like the IAABC has different categories of trainers and consultants for different species. I learned that week that I have no business giving out even casual advice to friends about bird training or behavior. My knowledge and skill set with cats and dogs does not directly transfer to birds because I do not have the species-specific knowledge needed to work with them. The workshop at NEI was exactly what I always hope for with professional development. It taught me a ton, showed me holes in my own abilities and knowledge, and also reinforced the skills and knowledge that I do have and how valuable they can be for working with any animal.