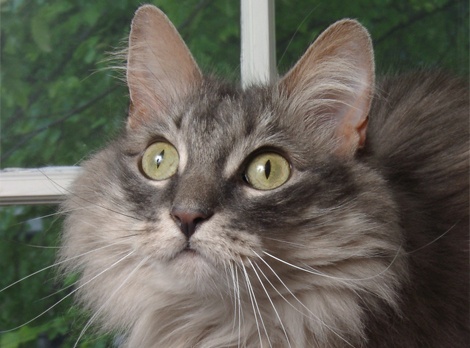 When my cat Lassie was young, she had springs for legs. I’ve never seen a cat jump as quickly or with as much agility as she would, especially when it came to accessing canned cat food as we opened it on the counter. We took video of her doing this once because it became so ridiculous that it looked like there were three cats involved instead of one! Every time she was moved to the floor, she was back up within seconds, and not always from the same direction. In the video we have of her, she is back up on the counter eight times in 45 seconds, and that’s with the time it took to remove her, spoon cat food from the can, and nudge her away several times. While this was pretty entertaining, it also quickly became a frustrating behavior. We could not get the food onto the plate, and she was one of three cats in the household, so the other two needed to eat, too!

The first step was to identify what the problem was for us and why we had failed so completely to change it up until this point. The problem behavior was that she kept appearing on the counter, so using the ABC model for behavior analysis, my “B” for “behavior” would be “cat on countertop.” The antecedent, or what always preceded the behavior, was opening the can of cat food. So my “A” for “antecedent” was “opening the cat food can.” And lastly, the consequence. Why was she continuing to act this way? From our perspective, we were making it difficult for her by removing her from the counter over and over again. However, from Lassie’s perspective, this was clearly not a punishment. The behavior was not decreasing in frequency. If anything, it was being reinforced, because her tenacity and speed seemed to be increasing. So what was the maintaining consequence? I believe the “C” for “consequence” for this situation was the quick licks and nibbles she managed to swipe from the can every so often as she jumped up. She was being intermittently reinforced, and this trumped everything we had tried. To put it into the ABC contingency, this is what we were seeing:

My current prediction? This behavior would increase because she was gaining the tastes of food. It was being positively reinforced.

Alright, so now that we had identified the problem, what were we going to do about it? Well, you can just imagine the suggestions that came from friends and family: spray her with water, swat her off the counter, scare her with a loud noise, shut her out of the room. All of these may have worked, but almost all of them had something in common: they employ what is intended to be an aversive in order to punish (or reduce) the behavior. As someone who has worked with behavior extensively, I knew that that was not the first place I wanted to go. I also knew that while shutting her out of the room would be a good way to manipulate the setting, it was not going to be a good solution long term for our family, as it required a large effort each time, and I suspected she would begin to avoid being picked up around mealtimes knowing that she was going to be closed away. So I went the way that I was most comfortable, both ethically and logistically, and asked the question: If I don’t want her to be on the countertop, what do I want her to do instead?

I had identified the problem behavior and what was maintaining it, and decided that I was most comfortable teaching Lassie an alternate and incompatible behavior to replace it. I decided that the alternate behavior in this situation was for her to be on the floor and then to make the criteria even clearer, I chose a “four feet on the mat” behavior. Since the reinforcer that had worked to develop the current behavior was tastes of the wet food, I selected this as my reinforcer for the new behavior as well. My new ABC looked like this:

In addition to this, I decided that if Lassie jumped up on the countertop or left the mat, I would use a food lure to bring her back to the mat. This allowed the procedure to be free of physical manipulation or potential aversives. Ideally, my reinforcement would be well-timed enough to limit the number of times I had to use a lure. 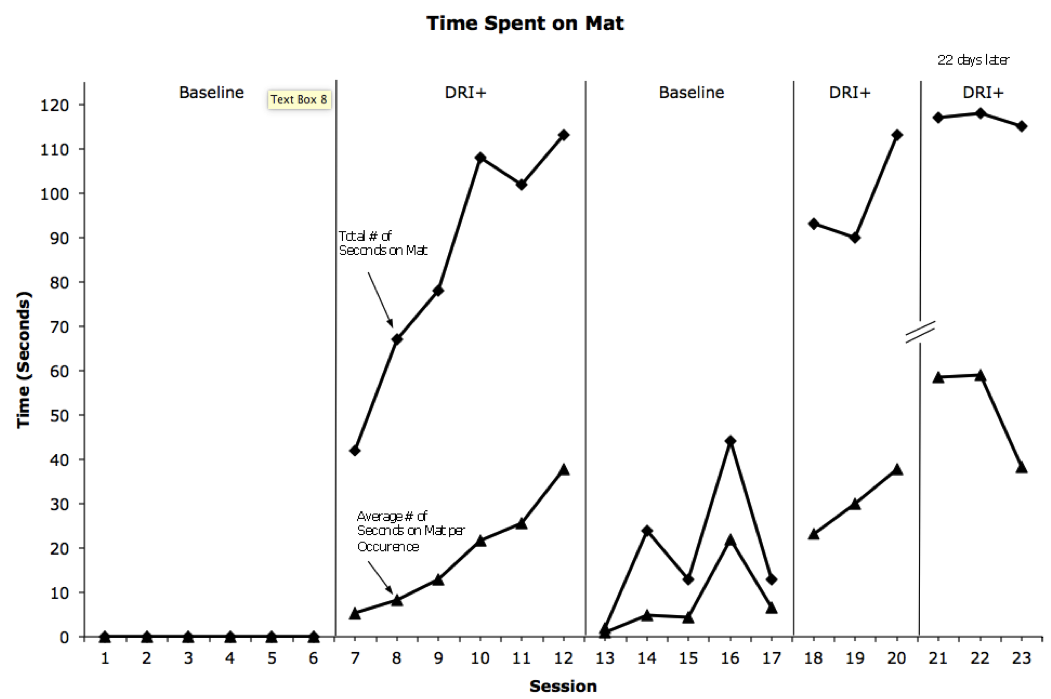 During the initial session, I did not reinforce for being on the mat at all and Lassie chose to spend no time there. When I introduced the reinforcement, her time on the mat increased with each successive session. The first session, she spent about 40 total seconds on the mat, the second session it was close to 70 seconds, and by the sixth session, she spent nearly the entire 120 seconds there. As you can see with the other data line on the graph, these were not necessarily consecutive seconds. With the initial session, she averaged just under 10 seconds per each “stay” on the mat. However, by the sixth session she spent nearly 40 seconds on the mat each time she was lured back. Things were going really well, so I decided to return to baseline to test whether it was the intervention that was working or something else.

During this return to no reinforcement for sitting on the mat, Lassie’s behavior immediately regressed. While she did spend some time on the mat, as compared to the initial baseline when she spent no time on the mat for six sessions, she did not ever spend more than about 45 seconds there total out of the 120 seconds that were available each session. After five sessions, I returned to our training protocol.

The return to reinforcement for the mat behavior went well, and Lassie showed immediate improvement in her behavior. She again made it nearly the whole 120 seconds on the mat by the third session (though she did have to be lured back twice, hence the 40 seconds of duration for each stay on the mat). This change was maintained 22 days later when I checked in by taking video again.

At this point, I felt like the behavior was under control. As her owner, I didn’t mind giving her a couple reinforcers during the time I was putting the food on the dish in order to keep her on the mat. This was a socially significant shift for me, and one I could live with long term. I will say that now, a couple of years later, the behavior is very solid. Lassie never jumps up on the counter during feeding time, and the reinforcer at this point is being allowed to lick the can. It turns out that from her perspective this is way better than food on a plate. Maybe that was the problem all along?

While data collection can be arduous at times, it makes a very big difference in how we are able to view successes and show them to clients.

Adria Karlsson is an applied behavior analyst and Certified Dog Behavior Consultant.  She works primarily with dogs but also with the occasional bonus cat through her company, Dog Willing, in Cambridge, Massachusetts. You can reach her via her website, www.dogwillingma.com, or by email, adria@dogwillingma.com.