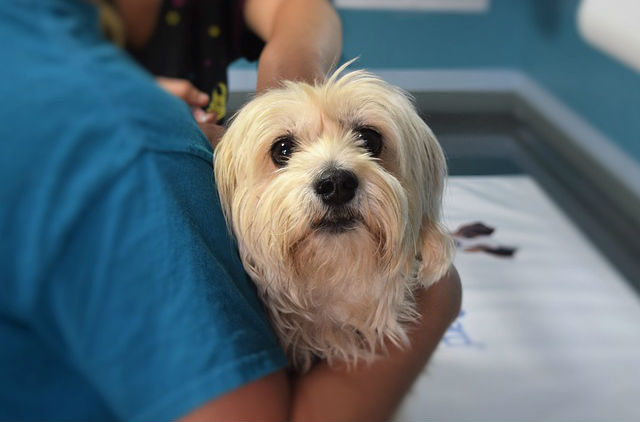 As a licensed veterinary technician by trade, training cooperative veterinary care is a practice that is near and dear to my heart. I have worked in environments where animals have been restrained against their will, and admittedly have even participated in this restraint, in order to just “get it done.” I have witnessed all levels of stress, anxiety and fear from these patients, from subtle appeasement behaviors to outward defensive aggression. After experiencing injury to myself when restraining one such patient and empathizing with that pet’s severe discomfort in the situation, I knew there had to be a better way.

So began my journey into training cooperative veterinary skills in our patients. It was simple enough to integrate into the practice I work at, as I already offered other training services like puppy and obedience classes. My coworkers quickly understood the benefit of this service and started offering it to clients whose pets they thought could benefit. The success of this service has been twofold: Patients learn to accept and even enjoy veterinary care, and clients become even more bonded to the clinic. The most common procedures I see patients for include holding still and accepting handling for a basic physical exam, blood draws, and the dreaded nail trim. I approach each with the same basic plan, which I will outline below.

Most patients who enter the veterinary hospital are already experiencing some level of stress before we even enter the exam room. Maybe the pet has had previous negative experiences, or maybe it is the overload of sensory stimuli in a novel environment. Whatever the reason, the first step in creating the cooperative patient is to teach them stillness and calm. Sometimes this means playing some simple games or asking for simple tricks and behaviors before we get started. Think sits, hand targets, give paw, etc. Rewarding known behaviors in potentially scary or novel environments can boost a patient’s confidence, help with relaxation, and warm them up for learning new skills. There are three go-to stationing behaviors I like for teaching stillness: settle on a mat, chin rest, or stand for exam. The behavior I choose is patient-dependent. I might experiment with all three and see which behavior the dog seems to be most comfortable performing, and go from there.

Once the dog is consistently and comfortably stationing in whatever position you’ve worked on, it’s time to introduce some gentle handling and touch. The most important thing to remember when you begin handling is consent from the dog. Working these exercises builds trust and teaches the dog what to expect during veterinary care. If the dog moves away from the station while you are working, it means they are not comfortable with the task you are performing, and you need to back up a step (or two or three) in your training plan. Always allow the dog to move away if they want, and do not begin again until they have willingly returned to their station.

Finally it is time to introduce the different items or equipment that will be used during the exam. The most common items I begin with are the stethoscope, syringes and blood collection supplies, or nail clippers. Your progress with item introduction may be dependent upon whether or not the dog has had previous negative experiences with them. For example, we have likely all witnessed the dog that runs into another room when the nail clippers appear. It is critically important to build a positive conditioned emotional response to the presence of your items before you begin to handle the dog with them and expect them to remain still and comfortable.

When your boss and owner of the practice asks you to work with a client, you take on the case! It was recommended that Wesley and his owner meet with me for training sessions after his routine annual physical. Wesley’s owner described the visit as “exhausting.” Wesley is a very friendly dog, but one who I would describe as the “duck and cover” type. It is clear that Wesley would rather interact by chasing or tugging a toy. If one was to come in for a pet, Wesley would quickly dodge your hand and jump backwards but return to you with a toy in his mouth as if to say “play this way please.” I quickly understood how Wesley’s exam could have been so tiring for all of the humans involved.

The most difficult task in working with Wesley was teaching him how to remain still. His behavior in the hospital did not indicate that he was overly stressed, but quite the contrary, he was very curious about the environment. Wesley was always very happy to greet everyone on his way in, tail wagging, tongue lolling, trotting into the exam room with a pep in his step. Once in the room, Wesley would be everywhere: Checking in with me, checking in with mom, bouncing on the table, jumping off the table, or sniffing under the bench. Wesley knew how to lie down, but staying settled on a mat did not seem to be his style. I decided to shape a stand for exam at, but not on, the exam table. Wesley caught on very quickly that visiting me at the table equaled clicks and cookies, and soon I started adding in duration and touch. Once we got rolling, Wesley rocked his sessions. I was very quickly able to add in the stethoscope and listen to all quadrants of his chest, flip up and look inside both ears, and even look inside his mouth. Wesley’s owner described his behavior change as “night and day.”

In this video session with Wesley, you can see how he is able to tolerate all of the handling exercises as described above. This is also the first time I introduced some blood collection supplies. You can see how Wesley is wary of new things “coming at him” and at one point even backs away from the cotton ball. I toss a reset cookie and wait to see if he wants to return to his station and try again. When he does I back up a step before approaching him with the cotton ball in different way. Finally, I end the session with just some easy stroking.

Wesley’s new skills were put to the test recently when he came in for sick appointment. He had been experiencing some GI upset and the veterinarian needed to examine him and give him an injection of an antiemetic. I explained the approach to Wesley’s exam that we had practiced during our sessions to the veterinarian and he rocked it. When it came time for his injection, I was so proud when Wesley stood very still despite the fact that the medication can cause a stinging sensation. Wesley’s owners were elated with his behavior, and the staff was grateful for a cooperative patient.

I was asked to work with Rue by one of our staff veterinarians. The vet described Rue as anxious and avoidant. She would not allow for any more than minimal auscultation of her heart during examination. The owner requested a nail trim during their visit, which was attempted but abandoned as soon as Rue jumped off the exam table and hid under the bench beneath her owner.

The first day Rue came for a training session with me it took five minutes just to get inside the building. I honestly was afraid she was going to slip her collar, so I had the owner apply a slip lead to get her inside safely. Once in the exam room, Rue was panting, pacing, and could not settle. She would accept treats from my hand or from the floor, but would not allow me to touch her. Rue’s level of anxiety at the hospital concerned me, and after speaking with the veterinarian who saw her for her examination, she was prescribed trazodone for the owner to administer prior to her training appointments. I noticed a marked improvement in Rue’s anxiety at her next training session just three days later. She still had hesitancy entering the building, but it was accomplished much faster and once in the exam room I was able to hold Rue’s attention for longer than a fleeting moment. I would still describe Rue as being hypervigilant of her environment at that point. Any noise outside the exam room would pique her interest and she would lose focus from me, running to the door and crying. This behavior was improved after adding calming music to our sessions to drown out background hospital noises. For three weeks Rue’s owner brought her twice a week to work on simple stationing/relax on a mat exercises. Sessions were always kept short — 15 minutes maximum. Finally the day came when Rue jumped out of the car for her owner and pulled him into the building instead of hesitating at the door. I knew we were ready to move on to handling.

Once Rue was settling on her mat nicely and was no longer so concerned about the goings on of the rest of the hospital, it was easy to incorporate some simple handling exercises. Soon I was able to begin introducing the stethoscope, a syringe to simulate vaccine administration, and the nail clippers. Rue accepted handling with the stethoscope and syringe rather quickly. Wagging her tail while holding her station as I simulated picking up her skin and pressing the capped syringe to her scruff. Click, treat. Rue caught on very quickly. The nail clippers took a bit more work. It was obvious that Rue had already formed a negative association with the presence of the nail clippers. So we took it slowly. Very slowly. And I commend Rue’s owner for being so dedicated to the process.

After six weeks of meeting with me twice a week, the day finally came that I felt Rue was ready for me to trim a nail. We had been working duration with holding pressure of the clippers on her nails, but hadn’t actually tried to clip any yet. I started with a few warm-up repetitions of holding pressure duration, then on the third nail, I clipped. Rue pulled back her foot, I jackpotted some cookies, and she did not leave her station, so I backed up a few steps and worked a few repetitions of simply touching the clippers to her foot, a step I knew she would be comfortable with, then tossed a reset cookie away from the mat. When Rue returned to the mat tail wagging, I knew we were in business.

In this video session with Rue, I am working toward being able to trim at least one nail on each foot. This video was taken three to four weeks ago. In my most recent session with Rue, I was able to trim eight nails in one visit. Rue may never be a dog who we can trim all nails on all four paws in one sitting. She will also likely never be a dog who “enjoys” having her nails trimmed. But Rue has made impressive strides in her overall emotional response to the veterinary hospital, necessary exam skills, and her tolerance of having her nails trimmed, a necessary husbandry procedure.

Remember these key points when training cooperative skills in your canine patients:

Finally, the biggest take home when training cooperative care, is to move slowly and have patience. This is especially true in those pets who have already experienced negative associations with veterinary or husbandry procedures. Follow these guidelines and you will be well on your way to creating the cooperative canine for veterinary care!

Jessica Fritschi, LVT, CDBC, CPDT-KA, is the owner of The Noble Beast Dog Training in North Tonawanda, N.Y. She offers training and behavior services to both dogs and cats through her personal business and at the small animal veterinary practice where she is also employed.