A Circle of Friends Makes the Difference for Chiquita: A Video Case Study

Written by the Humane Society of Silicon Valley 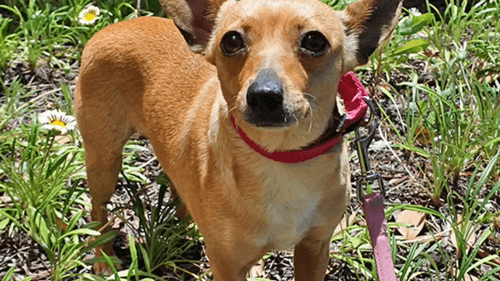 Chiquita was living with two other under-socialized dogs in the previous home. Their owner was starting cancer treatment, and could no longer care for all three dogs. We ended up getting Chiquita and Ramon both surrendered to us.

All dogs were fearful when we met them, but Chiquita and Ramon were at least eating treats in our presence. However, they were both very hesitant to approach and interact with new people, and would approach for the treats and then immediately retreat. They were very wary of the shelter environment, startling easily from noises, walking around with tucked tails, and actively avoiding interactions with people. At first, Chiquita was also indifferent towards dogs and would alarm bark.

Initially, Chiquita was roomed with her former housemate Ramon, but we quickly separated them so they would not facilitate one another’s anxious behavior. Ramon made progress quickly; however, Chiquita was slower to improve. We started off with only evaluation assistants— volunteers who have been specially trained to read dog body language— in her room; we knew they had the skills to help Chiquita learn through desensitization and counter conditioning to the presence of people.

She slowly became more comfortable and started to relax around volunteers who would visit her regularly, who then became her “Circle of Friends.” Dogs with special behavioral challenges have a list of volunteers who are allowed to interact with them posted on the door of their habitat.  Only volunteers in her Circle of Friends were allowed to take Chiquita for walks and introduce her to new people so that a familiar person could monitor her threshold and help bridge the trust with someone new.

Once Chiquita made her first two human friends, we hit a little bit of a roadblock with expanding her circle. At that time, we started to introduce her to dog playgroup and also added an herbal supplement. The combination of these two seemed to help her get back on track with expanding her Circle of Friends amongst staff and volunteers.

As Chiquita began actively participating in playgroup on a regular basis, her confidence increased dramatically. We also noticed it was easier to introduce her to new people in a playgroup setting.

When the time came to introduce Chiquita to a potential adopter during an adoption promotion, we made sure it was facilitated by a volunteer who was part of her Circle of Friends. Chiquita is now in her forever home, where she is relaxed with her family. When her owner was away on vacation, she was able to stay with a volunteer who was part of her circle, and she made new doggie friends there. We hope Chiquita continues to build her confidence now that she is in a stable home environment.