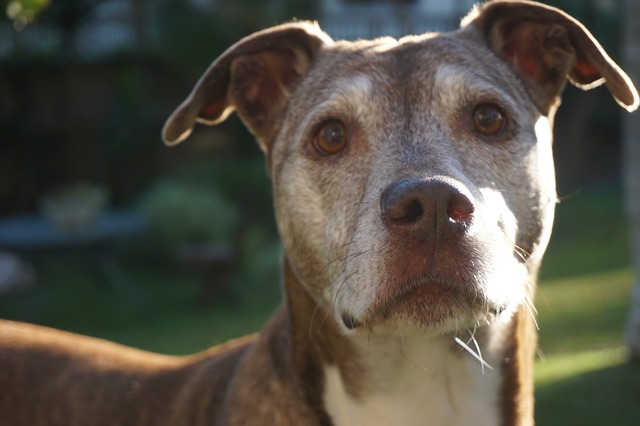 Bilateral cataracts are a condition that many dogs face as they age. While most do not see a reduction in their quality of life, this was not the case for Jeter, a 9-year-old terrier mix. After observing that he had low contrast sensitivity causing him to walk into items when he was in very bright or dark environments, I had him examined by an eye specialist, who decided that surgery would be the best option for him. Leading up to the week before surgery, Jeter was going to require eye drops three times per day. During at least the first month post-op, he would need to have five different types of drops administered to both eyes daily.

I immediately developed a training plan to help Jeter develop a positive conditioned emotional response (CER+) to receiving eye drops. Jeter’s willing participation in his cooperative care routine was extremely important to both of us. The use of any force would not only cause him to retreat, growl, and air snap, as became evident when we first started doing nail trims soon after he was adopted; furthermore, it would have harmed our overall relationship.

While it might seem simple to have a dog hold still while drops are administered, I broke the entire process down into many manageable steps. Jeter first needed to develop a CER+ to these steps before I combined them to accomplish the final goal.

Below are the individual activities with their different steps in training. We started off as easy as possible and then increased the difficulty.

I originally started training Jeter to accept a drop of water touching his muzzle while his muzzle was held in my hand. This idea came from the book Cooperative Care: Seven Steps to Stress-Free Husbandry by Deborah A. Jones, PhD. The plan was to move the drops closer to his eyes over a number of repetitions. However, I found that this caused him a great deal of anxiety, so I  eliminated it from his training plan. While this step was not right for Jeter, it is very helpful to other dogs, and it is one that I encourage my clients to implement.

I found that Jeter progressed more slowly when working on activities with his right eye. While no known injury had occurred, it is possible that the internal irritation of the right eye caused him more pain than the left eye. I made sure to work extra-slowly to ensure a solid CER+.

When Jeter was successful with each of the above activities, I began to combine them. Because I knew these combined steps would make the overall task much more difficult, I took a few steps back with each process. For example, while holding his muzzle high for three seconds, I brought the eyedropper toward his head for one second. I decreased the amount of time his muzzle was held while also not bringing the dropper all of the way to his eye.

By the end of the training, Jeter was able to remain calm while I guided his muzzle upward and held it for five seconds, while I lifted his eyebrow and hovered the dropper directly over the eye for five seconds. It was time to administer one drop.

Before this, Jeter would receive one special treat, which was only used for this training, for each step. However, after I administered a drop, I gave him ten treats in a row. The increased number of treats was to ensure that the quality of the reward was equal to the difficulty of the activity.

Before and after Jeter received an eye drop, I did “dry runs” where we would go through the entire process without actually administering a drop. I did this to prevent him from choosing toavoiding the setup because it always meant a drop was coming. In this way, he learned that while the activity was sometimes difficult, more often than not it was extremely easy for him.

This video shows a few different stages of the training. I tried to make sure that Jeter did not show signs of stress, such as lip licks, yawning, or backing away. If he did, I took a step back in the process and built more of a solid foundation.

This video is Jeter after his operation. The cone meant I didn’t need to grab his muzzle to administer the eye drops like we’d practiced for. Jeter has now been successfully prepared for pre-operative and post-operative cooperative care and I feel that he was less stressed about the entire process than he would have been without this preparation.

Read another article about Jeter here.

Tori Ganino, CDBC, CPDT-KA, is a Certified Dog Behavior Consultant through the IAABC, Certified Professional Dog Trainer-Knowledge Assessed through the CCPDT, and a member of the International Companion Animal Network (ICAN). She owns Calling All Dogs, located in Batavia, New York, where she teaches group classes and private lessons for obedience and behavior modification. More information about her services can be found at www.CallingAllDogsNY.com.