Cat Training Corner: Training a Kitten to “Go to Box” 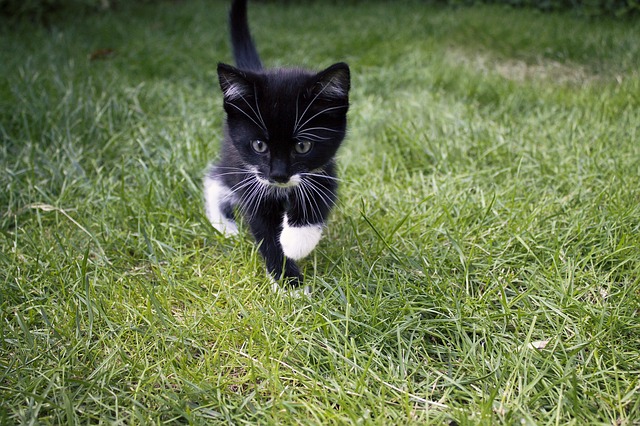 Go-to-box training is a very useful tool. It enables you to not only relocate a cat, but more importantly to refocus him. It is an excellent tool for teaching impulse control. I find that target training is the best first step to teaching this. Below is a case study of teaching an impulsive kitten to go to a box on cue.

I worked with Freddy and his owners from the time he was 5 months old until he was 7 months old. I started with target training him, but unfortunately did not make a video of that. However, I do have a video of a different 5-month-old kitten who, like Freddy, was outgoing and curious.

As you can see, I first taught Phoebe that hearing the clicker meant that food was on the way. This buys you time—you will need to click within three seconds of the correct behavior for conditioning to occur, but the food can be delivered many seconds after the click. It’s much easier to click in a timely manner than to deliver food quickly, which makes the clicker a helpful tool. I only had to click and deliver the meat twice for Phoebe to make the association. Notice how after the first time I click and give her meat she is very busy looking around—but as soon as I click, she looks right at the hand with the meat—this tells me that she has already made the association—a very quick learner!

After that I was ready to introduce the target. I first put it within an inch of her nose and she approached it because she was curious—I clicked and then gave her some meat. She was so focused on the training that I was able to up the ante, and next present the target 6 inches away—she went right to it—click treat! I did it once more at about 6 inches and then the third time it was over a foot away—she went right to it again. She was a very good student, so we wanted to keep progressing, not only to move toward our goal of her following the target but also so she did not get bored. It’s a fine line between boredom and frustration, so trainers have to be very aware of their learner’s body language and progress. Notice how her tail was high and often curled—she was loving this! Also notice how quickly she responded correctly—no frustration when it was success after success. I not only increased the distance she needed to go to touch the target but also put it at angle, so it wasn’t right in front of her. Eventually I put it behind her—she was very alert to it and was watching where it might be placed.

After training Freddy to touch a target the same way I had trained Phoebe, I placed the target about 6 inches in front of him and moved it when he was approaching, necessitating that he take a step while it was moving before I kept it still. I worked up to his taking four steps while the target moved before keeping it still and allowing him to touch it. Now I was able to lead Freddy around.

Another separate aspect of his training was to put down a specific box and put dry food in it. I used a brand of dry food that was new to Freddy and that he loved, and I made sure that he only got it in the box. After he ate the food the box was put away. He quickly associated that box with the special food. Freddy enjoyed lounging in his box after eating, so of course we let him. Our long-term goal was to have him go to that box on cue and stay there for 10 seconds, so lounging was never to be discouraged.

The second video shows the client guiding 6-month-old Freddy to a box using the target stick.

It is very important to have clear criteria for the behavior that gets reinforced. Our criterion in the video was for Freddy to have three paws in the box. We had started the training with the criterion of having one paw in the box, and progressed to all four paws in. We continued to allow Freddy to remain in a box as long as he wanted to after eating, since soon we would be asking him to stay in it longer before the reinforcer would be delivered.

At the next consultation with the clients, Freddy learned to go to the box without the aid of the target. Since he was used to having food in the box, he went right to the empty box as soon as we put it on the floor. As soon as he stepped in we clicked and gave him the food. We next put down a second box, and clicked and gave him food as soon as he stepped in. We were able to increase the criteria to getting in the box, sitting or lying down, and remaining for 5 seconds before he heard the click and was reinforced with food. You can see this in the third video.

Note how we decreased the time he needed to remain in the box at the end when he was struggling to figure out what to do. We had probably trained too long that day, so we decided that the clients would not ask him to go to a box more than two to four times per session. This video illustrates how giving a cat time to decide what to do is often the best way to help—too often our “help” is just a distraction. Also note that the sound of the box being placed on the floor was what cued him—we were working on teaching him that hearing the word “box” meant go to the box, but at this point in his training it was the sound of the box being placed on the floor or tapped that motivated him. We only softly said “box” when he was heading straight to the box—this was how he would learn to associate that word with getting in the box.

This next video is an instructive “blooper” the clients sent me.

They had forgotten to remove Freddy’s food bowl! You can see how he dilly-dallies his way over to the box and does not get in until the client recues him by picking up the box and putting it down again. The client then cues Freddy to go to another box—he goes right toward it, but isn’t too quick about getting in. He does so eventually and earns a click and food, and then goes to his food bowl. What good conditioning that he went to the box twice when food had not only not been withheld, it was present during training! We discovered that withholding food for three hours before training was the right amount of time for Freddy—it resulted in him bee-lining for a box and getting in promptly without any frustration. Cats I have worked with generally train nicely after two hours without food. But one cat who was extremely food motivated got too frustrated if he had been without food for more than an hour. So finding the right amount of time to withhold food for the cat you are training is important.

This last video shows Freddy playing with his owner and then immediately being asked to go to a box and stay there 7 seconds. He does it!

We will increase Freddy’s ability to go from being worked up to being relaxed by making it more challenging with more vigorous play. A longer wand toy, as well as the client not having the food in her hand, will enable Freddy to concentrate more on playing, making it more challenging to go from active to quiet. Remember, you only have to click quickly—you don’t have to deliver food nearly as quickly, so don’t pick it up with your hand any sooner than necessary. Training a cat to go to a box in the middle of playtime is an excellent way to teach impulse control, as well as a good tool to have when you need to refocus a cat that has a tendency to play rough.

Patience Fisher owns a Patience for Cats LLC, a cat behavior business based in Pittsburgh, PA; she also owns a nonfiction editing business. She holds a Bachelor’s in Biology, a Master’s in Engineering, a Diploma of Feline Behavior Science Technology, and is a certified veterinary assistant. Visit her on Facebook at Patience for Cats.