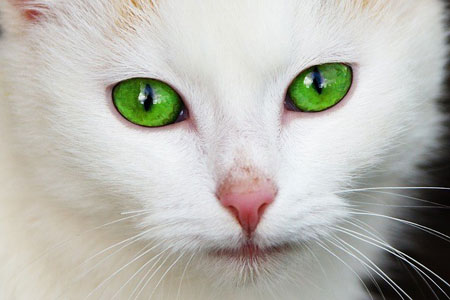 Although cats are stereotypically thought to be aloof and unsocial, domestic cats display great flexibility in their social behavior.  Cats have the ability to live solitarily, to live in extremely gregarious colonies, and to live socially in homes with humans and various other species. So what does the social life of a cat look like?

A cat’s social life begins early on at birth when interactions are focused around the mother and littermates. Along with tactile stimulation, a cat’s sense of smell is operational from birth and is a key factor in initial social interactions. Early on, cats are able to distinguish their family nest scent from that of an unfamiliar family, with kittens emitting distress vocalizations and backing away from an unfamiliar family scent. This indicates that olfaction is key in discriminating which individuals are a part of their social family. As cats age, olfaction continues to play a role in discriminating conspecifics and potentially even humans from one another.

An adult cat’s social relationships expand out from interacting primarily with their mother and littermates to other unrelated conspecifics. Domestic cats are a facultatively social animal, which means cats are able to live both socially and solitarily, with much of this social flexibility being influenced by the individual cat’s environment and life experience. For example, social living in free-roaming outdoor cats is influenced by the distribution of vital resources such as food, shelter, and mates. Cat social groups typically occur around areas of clumped resources while solitary living generally occurs around areas of dispersed resources. Although it was often thought that cat colonies were nothing but random aggregations of individuals around a food source, research has indicated that cats socialize non-randomly with preferred associates, or individuals they are significantly more likely to interact with and spend time near.

Similar to colony cats, housecats are also found to have preferred associates. Cats that are more familiar with one another groom each other more often, spend more time in proximity to one another, and display less frequent aggressive behaviors toward one another. In addition to interactions with conspecifics, pet cats may also form social relationships with members of other species including humans and dogs. Whether or not cats are able to form a bond with humans or other species is influenced by early life experience. Proper socialization, the process through which an individual develops appropriate social behaviors toward a member of their own or another species, is an important component to forming bonds. If a cat does not receive social experiences with humans, especially early on in their lives during a sensitive period between 4 and 8 weeks old, it may be extremely difficult for them to bond to a human, or they may never be able to do so. In these cases, feral cats typically live without direct human interaction, although they may still be dependent on humans for food supplies or other resources. But what about those cats who receive proper socialization and live in human homes?

Millions of pet cats live in homes in the United States alone. Despite the popularity of cats, the scientific community still knows relatively little about cat interspecies relationships. The research that does exist suggests cats respond differently toward their owners when compared with unfamiliar humans. A study examining vocal recognition found cats display a significantly higher orienting response (movement of ears and head) to their owner than to a stranger. Another study found that, similar to dogs and humans, cat blood pressure and heart rate increases significantly when presented with a human they are bonded to as compared with a stranger. This physiological response to a bonded caretaker has been said to indicate excitement for interaction with a preferred human and may be due to the animal’s reinforcement history with that individual.

How do cats respond to a human’s behavior? Research indicates that cats are sensitive to several human cues. For example, when presented with an unfamiliar, potentially frightening stimulus in the presence of their owner who exhibited a negative emotional message toward the item or a positive emotional message toward the item, the cats were able to discriminate between the human’s behavior toward this unfamiliar stimulus. Another study found that within bouts of interaction, cats engaged in more allorubbing toward a human in a depressive mood, approached humans feeling “numb” less often, and approached humans who felt agitated or extroverted more frequently. Together, this research indicates cats can detect human emotional state and human mood, and to some extent alter their behavior in response.  However, more research must be conducted in this area. What other factors influence the sociability of cats? How does human perception influence cat behavior? How does life experience influence the bond between cat and human?

While we wait for further research to shed light on the social lives of cats, we can use our current scientific knowledge in applied settings. For example, given the importance of resource distribution in the formation of outdoor free-roaming cat behavior, the availability and placement of resources within the human home may play a role in shaping cat social behavior. Manipulating the placement of a cat’s resources within the home may influence various behaviors, including intra-cat aggression and affiliation, human interaction, and litter-box use and scratching behavior. Owners with cats displaying these issues can try changing the layout of the cat’s resources, potentially dispersing these resources around the home so the cat can patrol their household and in each room have a resource area to visit, similar to the behavior of free-roaming cats.

Cat socialization opportunities are uncommon, especially offerings of kitten and cat training classes, which are relatively rare, especially compared to the popularity of these classes for puppies and dogs. Some researchers have even suggested cats should not be socialized outside of the home following 10 weeks of age, with one paper stating “Owners of older puppies should be encouraged to attended juvenile puppy classes, and owners of older kittens should be encouraged to attend classes but to leave their cats at home.”  However, there is little evidence to support the idea that cats must be left at home as they age. Indeed, it may be the perception of cats as homebodies that limits their social experiences, with owners believing cats cannot be socialized outside of the home and therefore not providing these experiences. However, if we never took our dogs outside of the home to properly socialize and provide them with positive experiences, we would likely produce dogs that were afraid to leave their homes or nervous around unfamiliar people as well. Within our own work at Oregon State University, we have been offering training and socialization opportunities to both kittens and adult cats with great success. With the importance of early socialization on cat behavior and bonding, future research must explore how providing positive experiences for older kittens and adult cats shapes their social behavior with humans and with conspecifics.

In the end, much of the “unsocial” cat stereotype may come from human perception and a lack of scientific knowledge about cat social behavior. Within our research, we have found that when presented with several categories of stimuli including human social interaction, food, toys, and scent, that the majority (50 percent) of cats preferred interaction with humans, followed next by food (37 percent), then toys (11 percent) and finally scent (2 percent). Additionally, we found a large amount of individual variability for preference for these various stimuli, indicating that each cat may have its own preference profile for items it most enjoys. The role of individual variation in cat behavior is supported by other research, and indicates that, as a facultatively social animal, cats have the ability to prefer solitude as well as social interaction. Only through additional research will we be able to further examine the social lives of cats. Until then go find your cats and interact with them; they might just like it!

Kristyn Vitale, MEn, is a Ph.D Candidate in the Department of Animal and Rangeland Sciences at Oregon State University. She received a Master’s in Environmental Science from Miami University, where her thesis examined social behaviors between free-roaming colony cats. She currently conducts research in the OSU Human-Animal Interaction Lab, where she studies cat cognition and teaches kitten training classes.