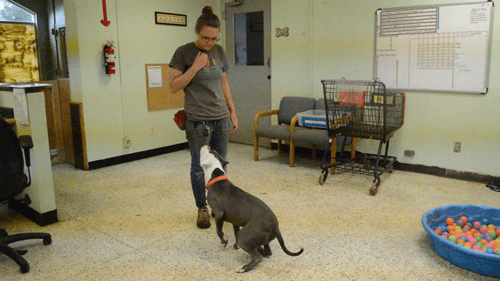 Care call from public to Animal Control stating that the owner of three medium-sized dogs had abandoned them. These dogs were on the front porch with no food or water.  Animals were not caged.

Mouthy on and off leash, inside and outside of the kennel. Impulse control issues.

Upon arrival at the shelter, behavior staff was notified of all three dogs. One spent time at our temporary shelter, was transferred to Jacksonville Humane, and then adopted. The second was adopted at Animal Care and Protective Services. Raisin was spayed and transferred to our temporary location.

No known health issues after intake.

Raisin is a young dog; she lacks impulse control and a proper outlet for her excessive energy. She jumps on people and bites at clothing, particularly when she is off leash and when the person makes themselves level with her. In her kennel, she is vocal and rushes out the door. She is reactive to dogs passing by her kennel—barking, jumping, and lunging. She pulls on leash and occasionally will play tug of war with the leash.

We will be working on Raisin’s challenging behaviors while in the shelter and will be actively seeking placement in a “Promote A Pet” foster. Promote A Pet foster owners work on rehoming from a foster home. This program is for hard-to-place animals or those who do not do well in the shelter environment.

If we find a foster, we will offer ongoing support to set Raisin up for success. While in the shelter we will:

7/19/16 Raisin arrives at McDuff location. She seems to affiliate towards people and dogs away from the kennel. Her behaviors upon arrival are that of a dog that is both anxious and under-stimulated: she paces, barks, and jumps in her kennel.

7/20/16 Two playdates with one of the dogs she came in with, Padme. On both occasions, Padme gave Raisin many appropriate corrections, as it seems Raisin has a very exuberant play style that includes biting ears and jumping on dogs. Later, in the yard, Raisin was very mouthy and jumpy when off leash. I leashed her when she was mouthy, and she settled after a brief walk.

7/21/16 Attention-barked often at Eric, a staff member. She settled and offered a sit when she noticed that he had treats, but began barking again when he walked away. Staff matched her up with, a neutered male dog with a similar play style to hers. Raisin was extremely tolerant of this dog—he often attempted to hump her, but she did not attempt to correct him. After a few minutes, she ignored him and became mouthy with the handlers in the yard—jumping with an open mouth at our chests, faces, and arms. We decided to re-kennel at this point. We added a chain leash, as she began playing tug with the leash and did not want a toy or other item to replace the tugging.

7/23/16 Raisin and Padme spent some time in the office. While there, Megan began rewarding for any calm behavior. Raisin quickly caught on to offering a sit.

7/24/16 Raisin and Jaxon had a great playdate. Raisin was initially mouthy around people in the yard, but calmer upon leaving. Her playdate wore her out! She also sat before going back into her kennel.

7/25/16 Worked on basic cues in and out of the kennel: wait at door, sit, wait for leashing, wait to unclip leash, sit while handler exits kennel. Practiced sitting while being handled, using treats. Worked on Relaxation Protocol, made it to Day 1, Step 4. Had a playdate with two social dogs.

7/26/16 Session of click for quiet in her kennel. Initially, she was jumpy and had her front paws up on her kennel door. She picked up on it pretty quickly and would either put all four paws on the ground or sit as I was passing by. I went in and out, rewarding for calm behaviors. Initially, I just rewarded for not jumping up on me. I then rewarded when she paused and looked at me, then for a “sit” with cue and finally an automatic “sit.”  Once Raisin was reasonably calm and reached this criteria, I added leashing and taking Raisin out of the kennel. She was still pretty jumpy for the exit but settled quickly.

In the yard, if she jumped on me I would ignore her, and then she would offer a sit without prompting. We did some impulse control work with the flirt pole. At the start of the session she would jump on me for the flirt pole, but by the end she was responding quickly and would sit and wait to start playing again. She also had another playdate; her play style is beginning to adjust to the other dogs’.

7/27/16 Session of click for quiet in her kennel. At the start, she put all four paws on the ground as I was passing by. By the third time I passed by, she was sitting. We worked on polite behaviors in and out of kennel. I used a spoon with peanut butter as a lure to prevent her from jumping. She settled quickly.

In the yard, she only jumped on me initially, and soon was offering a sit without prompting. We also had a session with the flirt pole. She seemed to enjoy the calming handling in between flirt pole sessions. However, if I bent down too low, she would resort to jumping on me. To change this behavior, I began in a standing position. I would reward for calm with a food treat and each time got a bit lower. If she began jumping, I would go back to the position that she was calm. Raisin also had playdates with Jaxon and Padme. We worked on the Relaxation Protocol and made it halfway through Day 1.

7/28/16 Not as fixated on handler, after initially jumping for attention, often open mouthed. She likes human contact and will sit to get it— handler waited for sits and gave Raisin attention when she sat.  She appears to like water as well and spent time in the kiddie pool. In the morning, we worked on Relaxation Protocol and completed Day 1. Later she had a playdate with three dogs, including a small dog.

7/29/16 Continued work with play sessions paired with calming. We also had a volunteer pass by her kennel and reward her for showing calm behaviors.

7/30/16 Raisin stayed overnight in our real-life room, but she ate some of the drywall. Will work on spending time there in a crate, or in shorter increments. We worked on a default sit in the yard during our flirt pole session.

7/31/16 Playdate with Silas. Settled after initial excitement. I passed by her kennel and did about ten rewards for default sits. By sit #6 I could also open the door all the way.

8/1/16 Played with Silas in the morning. Later Raisin and I worked on kennel behaviors. We worked on sitting in the kennel while I put my hand on the latch. I was able to open the door the whole way while she waited. We then moved on to her sitting while I was in her kennel. We took a walk in the play yard on a regular leash instead of a chain leash; she did very well. We rewarded about every four steps, and she sat every 15 steps. She seemed to enjoy this game.

8/2/16 We worked in the real-life room with her.  When I crouched down, she jumped repeatedly  and begin mouthing with light pressure that increased  on my arms and would also pull on my clothing. I practiced having her sit while I knelt down and handled her. Still on Day 1 of Relaxation Protocol.

8/3/16 Colin and Sylvia did the Relaxation Protocol with Raisin. We didn’t make it through all of Day 1, but we ended on a positive note. During click for quiet in kennels, Raisin offered a sit each time. They practiced polite greetings when entering her kennel. They were able to work up to opening the kennel and stepping one foot in, but not two.

8/5/16 During her potty break, she initially was jumpy and over-stimulated. I redirected her to the pool, and we practiced sit. She seemed to enjoy the mini-session, which lasted under a minute, and was less focused on me after.

8/6/16 Worked on fun enrichment: finding treats in a baby pool filled with plastic .

8/7/16 Did well for volunteers. We worked on her sitting in the kennel while they passed by and also while they opened the door. A volunteer gave her a flirt pole session paired with massage.

8/8/16, We worked on sitting to enter and exit the kennel, and for leashing. She is now consistently sitting to be leashed. We had a flirt pole session, and worked on Relaxation Protocol—she only got up once, during the “count out loud.” Gave her a calming massage after.

8/9/16 Transferred to Jacksonville Humane Society, as a space was open. No issues with transport. Raisin was adopted that day!

8/15/16 I spoke with Raisin’s adopter. He let me know that he thinks she is the perfect dog because she is affectionate, playful, and already knew many cues.

As usual, many behaviors dogs exhibit in a shelter can be due to environment and are often not noticed in the home. While the animal is at the shelter, we can make it as comfortable, stress-free and enjoyable as possible for both the animals and the humans interacting with them. 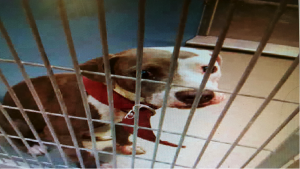 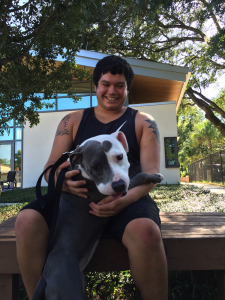 and her photo upon adoption

Amy Schindler, CPDT-KA, is the animal behavior manager at The Jacksonville Humane Society in Jacksonville, Florida and an Affiliate member of the Shelter Division of IAABC.