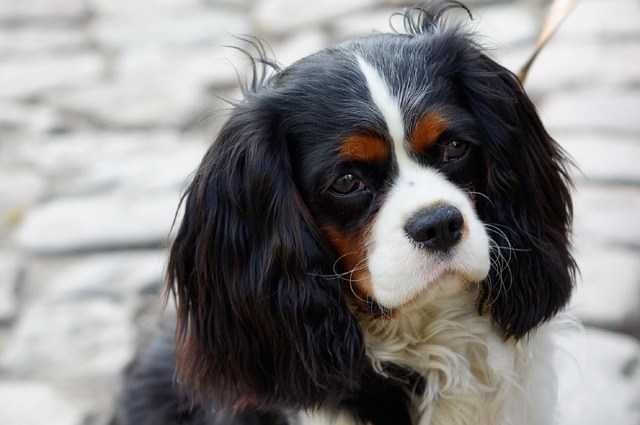 Other animals in the home: None

A three-year-old neutered collie mix dog had recently aggressed to a level three bite onto two other dogs while in a home boarding facility. The family also reported were two other aggressive incidents. One was one month prior, while visiting a friend’s home with a resident dog; the other was two years prior, around a dog that was visiting his own home. The clients were concerned about the food aggression shown towards dogs at the boarding facility, and whether it has the potential to extend to their children (a two-year-old and a six-week-old).

Benji was adopted as a 10-week-old puppy from a local shelter. The family was given little history of his life before the shelter. The couple did not yet have children and lived in a high-rise condo in a large city. Benji had play dates and a visiting dog where food was left out without any problems, until the age of eight months.

At approximately eight months of age, he started going to doggie daycare. This daycare had all dogs in one large room for constant play/interaction. At this daycare, up to 25 dogs would be in one large room, with communal food and water bowls available. When picking Benji up from daycare, he would often be in a crate for a “time out” because he was ” too rowdy”. The daycare workers gave no further information to Benji’s owners. He continued to go the daycare for another eighteen months until the family moved.

At approximately one year of age, he started choosing not to eat out of his bowl at home and to steal from the counters more frequently. The client noted that when she put the food on a plate he ate well, but she did not continue this.

The family walks Benji about twice a week, and he has a fenced yard for exercise. This is less time off the property than when he was younger because the family moved from an apartment in a city to a less urban area.

The first aggression incident occurred at one year of age, when the client brought out a rawhide chew with a visiting dog present. Benji lunged immediately at the visiting dog, who was near the client holding the rawhide.

The second incident, two months before the consult, was when the clients and Benji were at another family member’s home with their dog. There was a communal food bowl and Benji lunged and attempted to bite the resident dog. The dogs were separated and not allowed around any food together.

The third event happened one week before the consult, when Benji was staying at a home that has a home boarding service. At this facility, all the boarding dogs are kept in a group in the home, with communal access to food and water. All the dogs would be in the yard area through the day, only coming into the home in the evening. When another dog went to the food dish, Benji rushed, lunged and attempted to bite the dog. The handler separated the dogs before injury. The next day another dog was in the same area (no food bowl) drinking water from the communal bowl. Benji lunged onto this dog, pinning it down and causing minor injury. He was fed separately from all the other dogs for the remainder of his stay.

Benji reportedly had a poor appetite for his dog food. He gets fed from the table often and will also grab food from the counter and tables. The dog food dish is kept full and left out all the time in the dining area of the home. Often he would eat in the evening after the family was settled and home.

The family noted that they could pick up a piece of food from the floor near Benji without any snarling, growling, staring, or guarding from him. The children could sit and eat around the dog without problems. No video was provided at this consult of family interactions around food, or of day-to-day interactions in the home.

This dog has chronically inflamed skin. A recent course of prednisolone and antibiotics had improved his skin, and a hypoallergenic diet was started three weeks before the consult, which would reduce any inflammation in the bowels due to food allergy. His weight was normal, body condition score was 5/9, and he was up to date on vaccinations and heartworm preventative. All other physical findings were normal. No diagnostic tests were run—the referring veterinarian provided recent blood work and health history.

Benji’s body language during my greeting and examination was calm. He ate the hypoallergenic treats I gave him without any guarding or aggression. He didn’t show any tension over treats I purposely dropped on the ground. I did not offer any food puzzles or any other object with food during the consult, to keep the interactions safe.

Benji had no history of co-anxieties, so anti-anxiety medication was not prescribed. Drontal Plus was prescribed as a broad-spectrum dewormer to rule out any parasitic infection.

The focus of the plan was to decrease any potential triggers to anxiety around food and to stop Benji grabbing the family’s food. A solitary feeding area where the dog would also be gated away during family mealtime for safety and anxiety reduction was established: This would prevent much of the human food stealing and prevent any possibility of the dog aggressing over any dropped food.

I also instructed the family to find a new place for boarding; one that ensured no communal feeding and controlled play times to prevent reactive play. This was because Benji’s triggers to aggression were specific to other dogs being present in the room. In a communal daycare setting, avoidance of triggers was the easiest, safest and most effective method of control.

Due to the speed and intensity of Benji’s biting, I did not advise attempting any counter-conditioning to the presence of food around other dogs. Any failure, and this dog could cause severe injury to another dog.

Benji did not have any problems with his appetite or food aggression until after he started daycare. While the history is not completely clear, it appears that having a communal feeding bowl in a group of 20 or so dogs set the dogs up to challenge each other. Unfortunately, canine day care is not regulated in our state, and there are many places that allow reactive play to escalate to aggression. Many are also set up in ways that inadvertently provoke challenge for resources—like using communal food bowls—which can lead to resource guarding.

I feel it is very important to educate canine daycare facilities about why they should practice solitary feeding of the dogs, and control reactive play to prevent aggression problems. I encourage behavior consultants to visit day care centers for an hour or two, and observe how they operate before making any referrals.

Dr. Sally J. Foote DVM, CABC-IAABC, UIUC CVM 1984 is a small animal general practitioner with a behavior practice in Tuscola, Illinois. She is the president-elect of the American Veterinary Society of Animal Behavior, an advisory board member to the Fear Free℠ Practice board, contributor to the Fear Free℠ certification program, and Executive Director to Cattledog Publishing—the legacy of Dr. Sophia Yin.