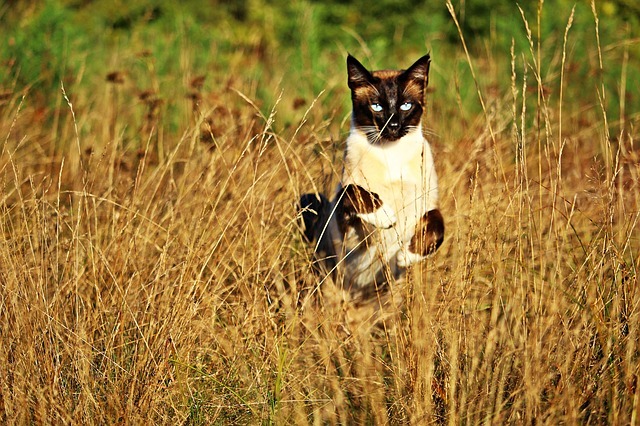 Smudge was found by his owner in a box full of kittens of mixed ages, which had been left in front of the Petco where she worked at the time. He was approximately 6 weeks old at the time of abandonment. The client adopted him and brought him home, slowly integrating him into the house with her two dogs over the course of a few weeks.

For the first four months Smudge got along with the dogs well, but then started stalking, pouncing on, biting, and rolling both dogs periodically. The client had him neutered at 6 months of age. After the neuter, the behaviors towards the dogs persisted.

Being a dog trainer herself, the client tried to resolve the issue in the following ways over the course of a few years:

She managed her household like this for many years – during which time her other dog passed away, leaving Bee as the only dog in the house – until I moved into the area, at which point she contacted me to set up a consult.

At our first consult, Smudge sauntered up to me with a question mark tail. After a quick sniff session, he rubbed against me and pushed his head into my hand for petting. As the client and I discussed his behaviors and routine in more detail, he curled up between us, purring. As soon as the client carried Bee into the room at my request, though, Smudge immediately crouched low, focusing intently on Bee with his muscles tensed and his tail twitching. Before he had an opportunity to escalate, I asked the client to remove Bee from the room. After a few seconds of staring intently in the direction they went, Smudge returned to his former relaxed state.

We discussed the conditioned emotional response Smudge had to seeing Bee, and how we not only needed to change the way he feels about Bee but also teach him what we want him to do instead of stalking and attacking her. We also discussed that even though she had already done a wonderful job of creating an enriching environment for Smudge, there were ways we could utilize that environment more effectively to better meet Smudge’s needs. And finally, I explained that the absence of a play response in the presence of toys usually does not mean disinterest but rather inexperience. Consequently, we needed to teach Smudge how to play with toys.

Since the client was already an adept dog trainer and had already clicker trained Smudge to perform some basic behaviors such as sit and come, I recommended shaping play behaviors. We decided to start with the fishing pole toy since Smudge already enjoyed chasing string, and got through the following steps at our training session:

We ended the session there, and I gave her the following training plan:

After about a month, when both Smudge and the client were comfortable with the new routine and Smudge had become adept at both foraging and playing with toys, we began to work on changing Smudge’s relationship with Bee. We started with the forward chaining version of the “Look At That” game: 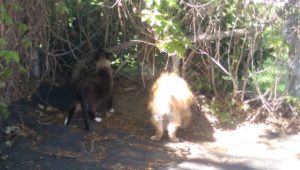 Smudge and Bee explore the yard together

A few weeks after that, she sent me a video of Smudge casually walking by Bee, looking at her, then checking in with the client. It has been ten months since the initial consult and the two animals coexist peacefully without any incidents.

Emily Strong, CPBC, CPBT-KA is the owner and operator of From Beaks to Barks in Salt Lake City, UT. She works with all species of companion animals.